Wednesday - So Wednesday afternoon Belde and I drove to the Blue Nile Falls. It was about a 30km round trip out of Bahir Dar. When we got there a local (and licensed) guide convinced us to hire him, and I'm glad we did because he was very friendly and full of information. We took a little boat across the Nile and then hiked a few hundred yards to the top of the falls. The falls were impressive and big as it is, but apparently they are only a small fraction of what they once were before most of the water got rerouted to irrigation and hydroelectric (did you know Ethiopia sells electricity to Sudan?). In fact we got lucky on Wednesday that the falls were "turned on" at all because one of the hydroelectric stations was off. 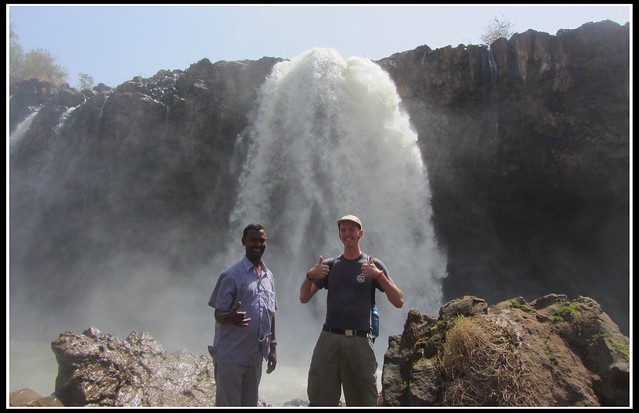 After poking around the waterfall we visited the totally indiana-jones-movie bridge: 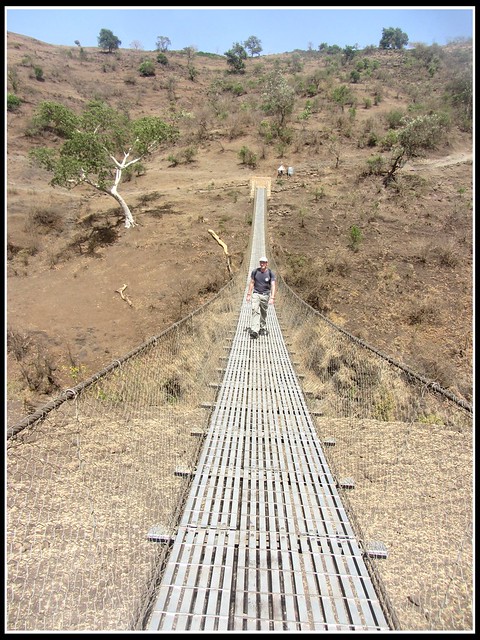 And then had coffee under a little thatched awning on the ridge right in front of the waterfall, the picture of which I put up the other day, but here's the coffee roasting and the falls: 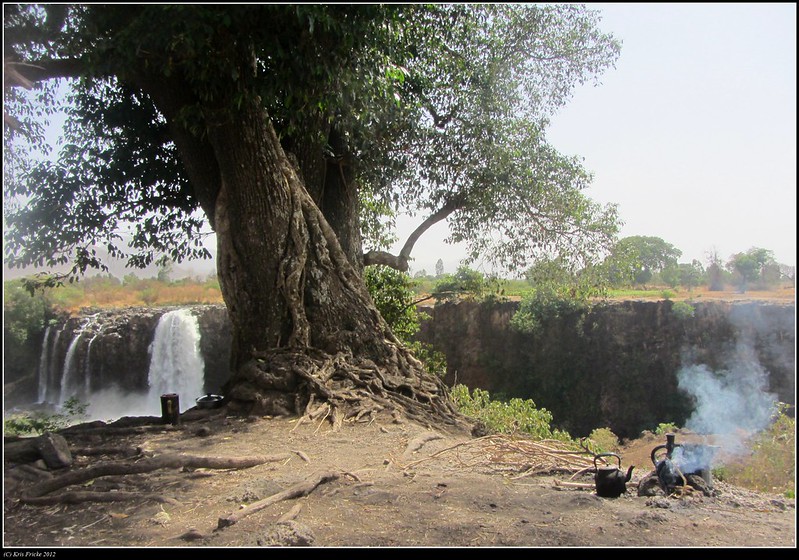 Thursday - Was our first day of training session. Unlike other assignments where we visited hives first to see where we were at, this one started right in with lecture. I found my interpreter to be a fellow pursuing his master's degree in apiculture (beekeeping) at the local university. So he knows almost as much as me. ;D

In the afternoon we finally visited some beehives. The owner of the beeyard hadn't been at the training which I thought might account for him insisting "it is not the appropriate time to open the hives! We must wait for the sun to set!" and forbidding me from using smoke on the hive.
For those of you unfamiliar with beekeeping, smoke is an essential tool. Applying smoke to beehives prevents the bees from getting all riled up because they can't smell the alarm pheromone (and there's a persist myth it makes them think their hive is on fire so they gorge themself on honey and then can't fly. That myth is dumb).
Finally I was able to convince him to let me open up one hive, so long as I didn't use any smoke and didn't remove any frames. As a little background, a large part of why I'm here is because the government has been promoting removable-frame hives from on high but not providing training on how to use them. The purpose of removable frames hives is you can remove the frames to inspect them and put them back without damaging the beehive. But in order to do this you need smoke, and you need to, well, remove the frames.
Even without smoke though I was able to remove my gloves and veil right in front of the hive as soon as I was done, the kind of antics I make a point of doing to try to combat their certainly that their bees are way too mean for management. 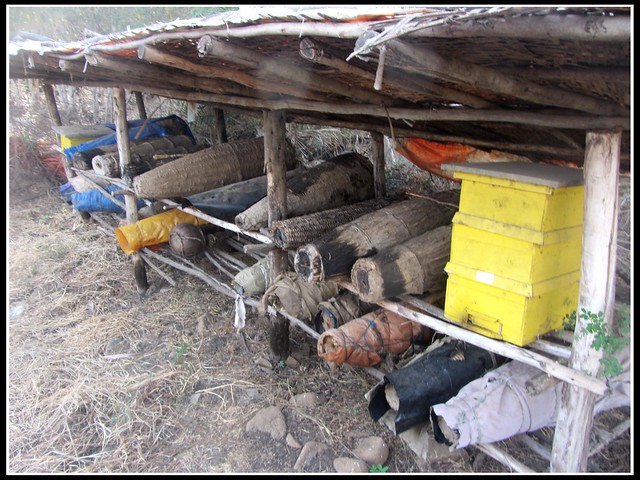 Traditional basket hives, a few yellow langstroth-like "zander" hives, and one "swarmin gourd" in the middle (lower rack). The colony in the gourd is supposed to swarm frequently because of the small size of the gourd, and thus give them more colonies.


After that Jean Reno Belde, Terefe (Belde's boss), Kere (the interpreter) and I went to a hotel that has high quality "tej." Tej is a traditional mead made with hops and olives. Formerly it was widely consumed throughout Ethiopia. Formerly. In more recent times it has become so common to make it with sugar instead of honey (and fermented sugar water is just plain crappy) that people generally stopped drinking it. Similarly the honey market here and in Nigeria is suffering from the fact that there's so much diluted honey being sold that consumer's don't trust most honey any more. In Ethiopia they are ALSO having trouble with beeswax that has been cut with parafin. Welcome to the modern world, where anything worth making is worth making crappy. 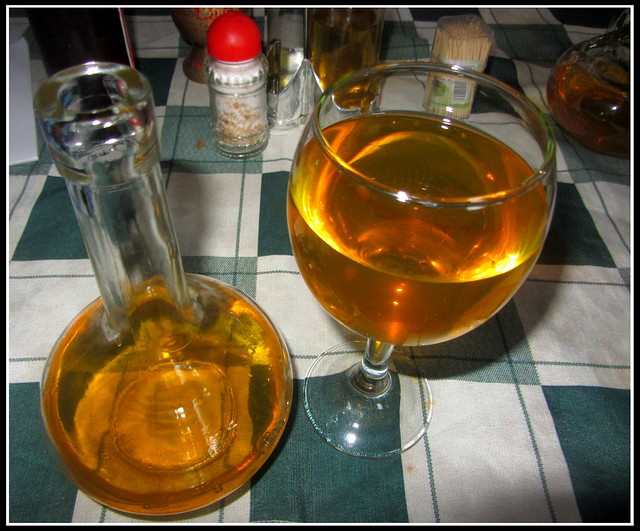 Friday (today) - Lecture presentation training in the morning once again. With of course coffee breaks at 10:00 and 3:00. Then a bunch of us went out to visit another bee yard.

I was hoping yesterday was a fluke, but once AGAIN I was told "no you can't open the hives right now you must wait till it's dark." I managed to finally convince them to once again let me open one hive and I thought we had an understanding that smoke was to be used. These beehives were in an interesting location, you had to go through a shed-like room with a door in it and you came into a beehive enclosure. When I got there I suddenly found that none of the English speaking persons were there with me and the people who were (there were very limited numbers of bee suits) didn't have a smoker. Trying to mime the need for a smoker was getting nowhere. I was strongly inclined not to even both opening the hive without a smoker because it would just make a mess and further convince them that hives can't be opened during the day, and I really should have, but we were already right there and they were expecting to open that hive. So we opened it, didn't remove any frames, but these bees got mad. Not any crazy unusual mad. Nothing worse than I'd expect if I did the same thing to bees in Southern California. But it was regrettable because there were angry bees flying all around the house, the whole group who didn't have bee suits had to hastily retreat, and it didn't do anything to improve the case that hives should be opened during the day.
Further discussion about smokers ensued when I was reunited with the English-capable members of the party, and they (and now these are people who had been in attendance at the training, AND in particular the person pursuing his graduate degree in apiculture) all firmly adhered to the line that no, smoke will only make the bees angry.
Smoke DOES THE OPPOSITE OF THAT. And is a critical element of the use of the hives they're all trying to figure out how to use!!! After learning from this discussion just how convinced they all were that smoke would make bees angry I was feeling extremely frustrated.
If we are able to tomorrow, I want to visit some bees and even if we don't get to open a hive I want to have a chance to blow smoke into a hive and demonstrate that the bees do not become angry from it. 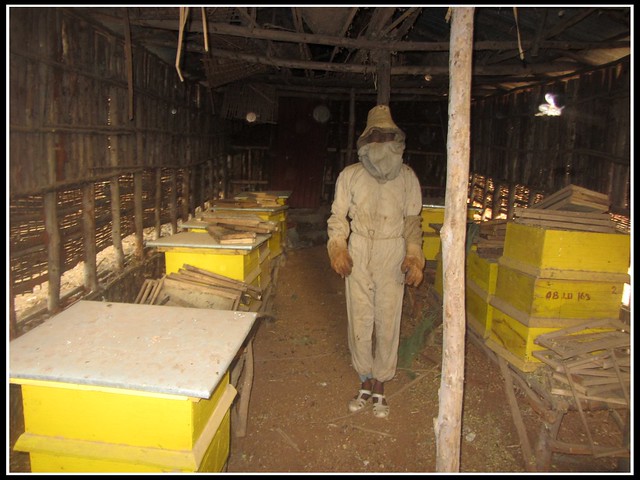