4/28, Saturday - Had the last day of the training session in Bahir Dar. Usually I try to do some hands-on candle or lotion making, but Teferi (the local ACDI (host NGO) representative) had told me uses of wax wasn't in the scope of work so we shouldn't do that. However due to interest among the class members and with the help of the instigation of my interpreter Kerealem, we reinstituted candlemaking into the schedule. So we did that on this last day.
For a mold they tried to use a hollow stick that Kerealem had found, but I think it ultimately proved unsuccessful. They had much more success, however, making the traditional candles used in Ethiopian orthodox churches -- by dipping strands of wool repeatedly in wax. I'm told they also sometimes make candles by pouring wax on a flat surface and letting it dry and solidify in a thin layer, and then rolling it up with a wick in the middle (back home at the Orange County Fair every year we have kids roll candles with this method). 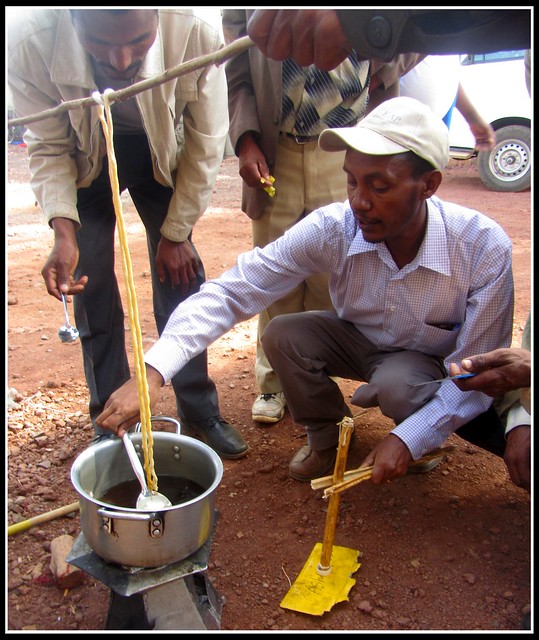 That evening after the training session was over Teferi, Beide (the driver) and Kerealem and I ended up sitting at tables in front of Beide's restaurant having some beers. There we were joined by two of Kerealem's colleagues from the university, one of whom was another beekeeping specialist.


4/29, Sunday - Started out the morning by riding bujujs (bujuj being a weird word to me, I think of them in my head as "buk-buks," which then makes me think of chickens) with Beide to get to "St George," the local orthodox church. Bujujs were invented in India and are common in Ethiopia as low cost local taxis. They appear to be little more than a minimal hull built around a motorbike engine. The parts are still manufactured in India but they are shipped over and assembled here, I am told.
Church was very interesting. It didn't appear to have a set start or end time, rather a continuous stream of white-shawl-clad church goers entered the sanctuary, received a blessing from a priest, listened to the ongoing sermon for as long as they felt like, and then joined the stream exiting. Church service is conducted in Amharic and Ge'ez (an ancient form of Anharic that now only exists in church use).

Thereafter Beide and I took the bujujed to a restaurant near his own, where I had a delicious breakfast. It was basically a fresh piece of flat bread with honey on it, and when I dabbed it in the pile of red pepper ("red pepper" here tastes more like cinnamon than the red pepper we have in the States) that had been provided with Beide's food it was even more delicious.
Also while going about with Beide I noted that he didn't seem able to go more than 100 yards without running into someone very glad to see him. Even later in Finot Selam some 200 kilometers away he'd run into seeming old friends on the street all the time. Eventually I'd find out that it's because, in addition to being a very likeable person, he teaches driving school (and maybe administers the test?) so drivers all over the area know him from having been taught to drive by him. In addition to this and owning a restaurant he has a bachelor degree in mechanical engineering, specializing in automotive. So my driver was thoroughly overqualified!

Hung out at Beide's restaurant for two hours or so that morning. It was a pleasant sunny day with a nice breeze (as always in Bahir Dar). Took a lot of pictures there including several of some colourful birds that were flitting about the trees. I don't think I'm normally very good at portraiture but I think I got some nice pictures of the local butcher.
While there I got to watch the production of coffee from the roasting of beans through to the cup of the freshest coffee possible being handed to me. I even got to try my hand at the grinding.
Also they served me some raw meat (beef), a common traditional way of eating it. I was pretty sure it was going to make me horribly sick but I went ahead and tried several pieces and it was indeed very good. I was grateful that shortly after that I was returned to my hotel for an hour to relax, being as, though feeling fine, I was quite convinced something horrible was about to happen to my digestive system. As luck would have it though I suffered no ill effects. 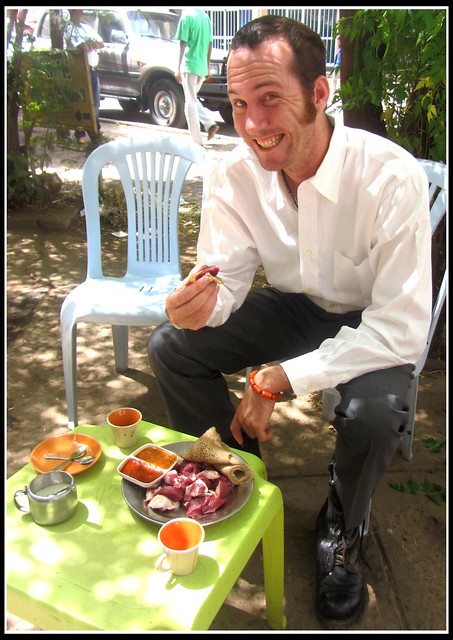 Beide and I reconvened a little later (around 13:00) and took a bujuj to the lake shore. There I'd been led to believe Woina, an assistant manager from my hotel, had arranged for us to go by boat to visit some more monasteries on the lake. Beide then departed saying he had other things he had to do, and Woina shortly showed up with Rahel, an accountant from the hotel. I guess all the other monasteries take hours to get to (wouldn't have really deterred me) but they decided instead we'd take the boat to another hotel that's on the water and have lunch there.
This other hotel did indeed have a very nice garden patio area. Set up was currently going on for a wedding to take place there that evening. One of the girls commented that it looked to be a very expensive wedding, possibly as much as 500 US dollars.
Woina (short of Woinechet)'s name means "wine," but she doesn't drink alcohol "because the bible forbids it." Rahel ordered an Ethiopian wine though (apparently they have that!). I tried the Ethiopian wine and to my utterly un-wine-sophisticated palette it tasted like a pretty decent wine. Altogether food for the three of us and the wine and two beers for me came out to around $15 I think.
While that may seem shockingly cheap, to put it in perspective I learned that as an assistant manager at one of the best hotels in town, and having a bachelor degree in law, Woina earns 1.8% as much as I do per month.

Then around maybe 16:00, a driver friend of the girls picked us up and dropped them off near their homes and drove me to my hotel. He even refused payment because he was doing it as a favor to his friends.


The next day I was off to Finot Selam to begin another training session. I'll start a new entry for that. 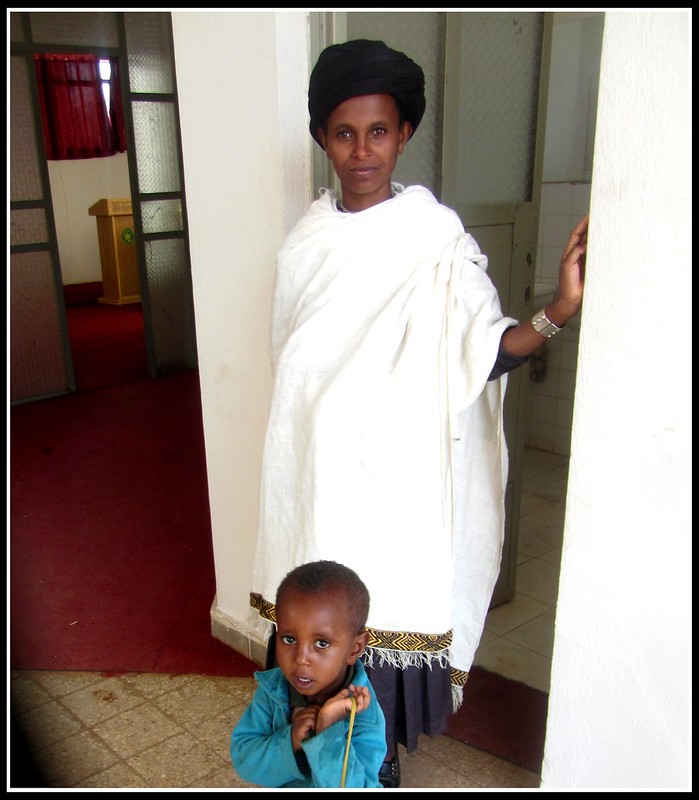 And here's a young mother who was part of the training class.
And here's a look underneath that shawl O_O