4/30, Monday- Monday morning Teferi, Beide & I drove about two hours to the town of Finot Selam. The road slowly wound through the undulating countryside. Much of the land we passed was being tilled by pairs of oxen pulling wooden plows. There were also large patches of eucalyptus forest.
Eucalyptus has been imported from Australia as a source of wood and by and large taken over the countryside it seems. People are happy about it because it provides good straight wood for construction as well as firewood, though I feel a bit saddened that it's no doubt heavily displacing the native foliage, and wonder about the ecological consequences such as animals not having their native forage any more.
We also passed through many villages. Often there were stacks of eucalyptus logs ready to be hauled off (I'm told they're imported to Sudan as well). Smoking piles of dirt signified charcoal production and bags of finished charcoal were stationed near the road for sale. And of course we had to slow to pass many many herds of goats and cows.

We crossed the Nile a second time (it makes a giant spiral before it leaves the country) and just before we descended from the highlands to lower country, as I was preparing to take a photo of an ox plow, suddenly I found myself looking at the rusting hull of a T-54 main battle tank.
"It's very old, from the battle with the derg 20 years ago" it was explained. "Have you ever been through a war?" I was asked ("no, America only has it's wars in other countries")

Finot Selam (or Finot Salami as it's called in my head) turned out to be a small town in which my hotel and the building next to it were the only tall (four story) buildings. Hotel was pretty nice, though my window looked right out onto an open air restaurant and specifically was right next to their television. Unlike the hotel in Lafia, Nigeria, they fortunately had the decency to turn off the TV and try to enforce quietness after 10 or so.
But before I discovered this, on entering the hotel, when I thought I was being led to my room, I suddenly found myself entering an event hall full of people sitting expectently, and was led to the dias. Apparently Teferi didn't feel like telling me that I'd be starting the training the very moment I got there. I was... somewhat caught off guard by this.


The Finot Selam group had a lot of very experienced people in it, including four who described themselves as "bee experts" when I asked what they did. I still don't know what exactly that means they do. But the group in general was restless with my coverage of bee behaviour, kept interrupting with questions like "when you smoke a hive, how do you prevent the smoke from drifting to the hive next to it and making those bees angry?" (asked while I was explaining the role of drones in the hive), or "but doesn't smoke kill the bee larvae?" (asked while I was explaining queen cells), as well as many other off-the-current-topic questions, many also pertaining to "tell us how you produce so much in the United States."
Finally I had to say "look, I could jump to the end right now and tell you right now that we produce so much in the United States by trucking the bees to whatever is blooming all year round and flooding our hives with pesticides, and be done in ten minutes, but we have three days here and I'm pacing myself to give you three days worth of material. The things I'm telling you to look for in the hive and what I'm telling you to do about them is the real way you're going to increase your production."
Tuesday afternoon we visited one of the beekeeper's beehives and I went through a hive. The next day at the beginning of class the beekeeper and those present expressed to the class how impressed they was with how I went through the hive, and how I did it during the day and without wearing the protective clothing, and the level of respect from the class was palpable. 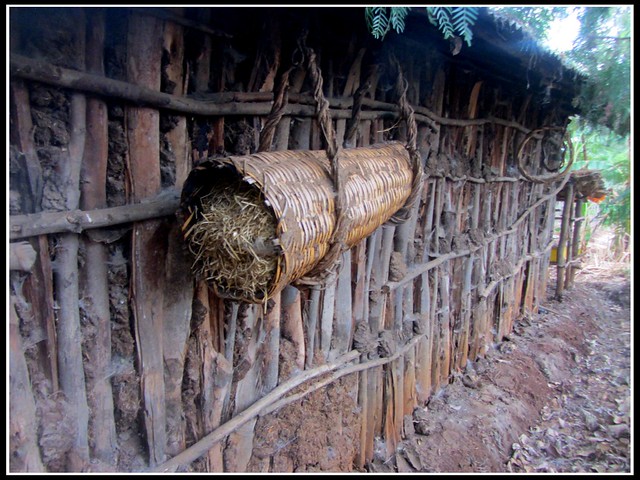 As for the bees themselves, the beekeeper had at least ten frame (ie modern box type) hives lined up along two sides of the outside of his house (including the front) and several traditional basket hives (see picture above) hanging from the eaves on the back. Dinner was being cooked on a stove outside not six feet from the nearest hive.
The sun was still up but it was a cool day and close to sunset and the farmer actually gave me the go-ahead to open a hive ... and even use smoke!
As usual with African bees I started out fully suited up. Shortly after I got started though I decided I needed to know if they were being stingy since I was in the middle of a village so I took off my left glove. And then when I was in the middle of the inspection and hadn't received any stings yet I took off the veil and other glove. Didn't see any small hive beetles, which had been pervasive in Nigeria. Bees had a major tendency to run off the comb being examined, which is a common trait I've found among African bees. By the time I was done nearly the hole colony was hanging on the outside of the hive.
After I was done inspecting the hive the beekeeper invited me into his house for some traditional food. We sat on cow skins on the packed-dirt floor and took turns tearing pieces of injera (crepe-like sour material made from the millet-like grain "teff") off a a communal plate and eating the pieces of roasted meat with it. They also poured us each a cup of "local beer." It tasted... like hay. Wasn't carbonated of course. Between washing my hands with local water and this somewhat questionable local beer I was quite certain I'd have some sort of intestinal failure in my near future (again I didn't, god bless my iron stomach!), but went along with it sportingly anyway. And I certainly greatly appreciate the beekeeper's generous hospitality.
As a thank-you I gave him one of the hive tools the Orange County
Beekeepers Association donated.

Wednesday, as I said, the class finally seemed to decide I knew what I was talking about. Also Teferi and Beide had stolen away either that morning or the night before without mentioning anything to me. They didn't reappear until the next morning. I didn't really need them for anything but being as they're supposed to be my support on this project and coupled with Teferi not mentioning to me on Monday that I'd be starting lecture immediately, I feel like maybe his communication skills could use a little work.
Also this day we visited the little honey processing facility in town. They had some interesting comb honey extractors that I was told were specially designed and manufactured in Ethiopia at the instigation of the NGO "SOS Sahel." They didn't appear to have any frame honey extractor, and most of the hives I've seen here have been frame hives, but I'm told there are frame honey extractors around (somewhere?). Though the lack of access to such was cited by several beekeepers as problems.

Thursday we drove back to Bahir Dar. On the way I saw what looked like a black coloured bird with a body about the size of an ostriches, but much shorter legs, and it appeared to have some red plumage on its head. It went by so fast I didn't get a good look at it, and I've been kicking myself ever since that I didn't immediately ask if we could stop so I could get a better look and a picture. It was huge! Beide and Teferi tell me its called a "turkish type" bird or a "jigra," but no combination of those words brought anything up on google. I'm still dying to know what it was. As we sped on from it and immediate regret at not stopping was already settling upon me I asked Beide if we might see another, to which he responded "no, it's quite rare."

That evening the girls from the hotel invited me out to dinner again. Dinner for three and a bottle of wine? $13. (Needless to say I paid this and last time)


Friday is already the subject of it's own entry