Picking up where I'd left off, I had just arrived in Mek'ella on Friday, May 4th. 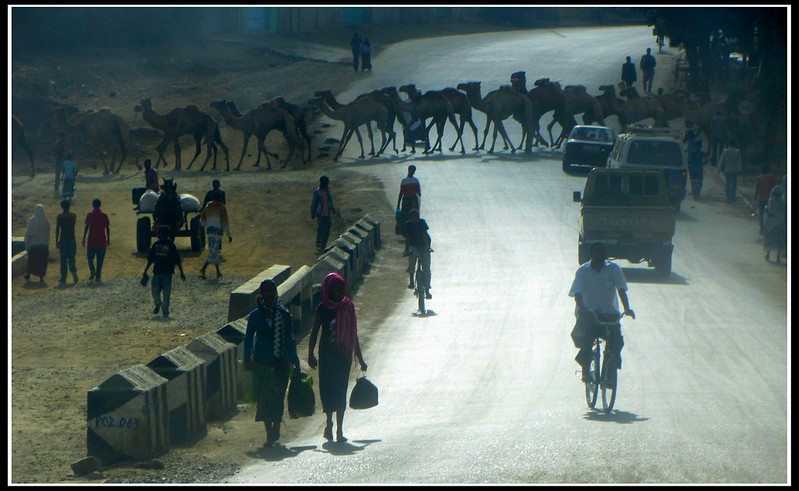 Saturday, May 5th - Goru (sp?) the local ACDI/VOCA (host organization) director met me at 9:00 at my hotel. Apparently, and rather to my surprise, he had only come by to tell me he still needed to find a translator and that he'd be back around 3:00 and we'd head to Korem. But then as a sort of afterthought he offered to give me a quick tour of Mek'elle.
Mek'elle (alternatively Mekele or Mek'ele) as it turns out is mostly made of stone -- there are cobbled streets and cobbled houses. It's the largest town and capital of the Tigray region and the location of a major Ethiopian university.
Mekelle and its immediate surroundings are also much more desert-like than Amhara (the region I'd previously been in in Bahir Dar and Finot Selam), while water was plentiful in Bahir Dar (which means "By the Lake"), seeing the surroundings of Mekelle it's easy to understand how a devastating drought in the 80s killed thousands. The camels pictured above also don't look out of place in Mekelle, and prompted another great quote: Goru turned to me and asked "Are these the same kind of camel you have in the United States?" followed by "what do you mean you don't have camels in the United States???"

The road to Korem from Mek'elle is about four hours long and after about an hour of the desert highlands begins to wind among steep green hills and mountains.

We passed through about three small towns and countless huts and little clusters of huts. Frequently when children saw me in the car they'd shout excitedly "china!" or "ferringi!" "China" because Chinese engineers are among the more common foreigners they see I guess, and all of us non-Africans look the same really ;) "Ferringi" because that's a word throughough the middle-east for foreigners, especially Europeans. I believe it comes from Byzantines referring to all Westerners as the Franks. And yes, the Star Trek aliens, the "ferringi," got their name from this word. Also in the Star Trek universe the Ferringi leader is called the "Grand Negus" -- "negus" being the Ethiopian (Amharic) word for "king".
I bet you science fiction fans didn't think you'd be learning science fiction things from my trip ;)

In the town of Maychew we stopped to get a "beamer" -- a projector. In an unlikely seeming occurence, a fellow brought a relatively modern looking projector out of a mud-and-wattle shack, in a nice clean modern looking carrying case. We then monkeyed around to see if it would talk to my laptop and of course it wouldn't, so we made some calls and eventually determined that someone else was bringing a laptop the next day with which it would probably talk. It seemed like an interesting mix of "first world problems" and a thoroughly third world setting. 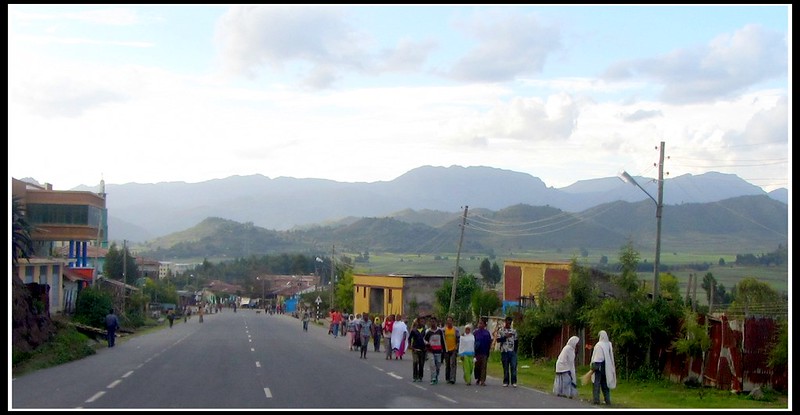 Sunday, May 6th - I was wondering how we were going to have class on a Sunday, what with Ethiopians being fairly religious and presumably needing to be in church on Sunday morning. Well it turns out two members of the class were priests (identified by a white turban-like wrapping upon their heads), and they came with their hand-held wooden crosses to bestow blessings.

Korem is a remote little village. For the first time in all my assignments thus far I felt like I was truly out deep in the third world. No fancy hotels here, no internet cafes here. An adorable little town it was pleasant to walk about in.
For lunch we went to a little restaurant down the road a bit that had a nice little outdoor eating area in front that was overflowing with foliage.
It started to rain while we were eating there, which prompted us to move from under the foliage to under the roof overhang, but the temperature remained comfortable and I just found sipping tea there while watching the rain over the village to be possible the most pleasant thing ever.
It even hailed a bit.
And then during the afternoon training session there was thunder and lightning outside and the lights flickered constantly. It kind of felt like a cheesy movie haunted house. But also awesome.
After the afternoon session was over Girmay (the interpreter) and I as well as the two lads from Comel (the honey processing plant director and head beekeeper), and the ACDI/VOCA accountant went strolling about the town. Girmay is a grad student at Mek'elle University, studying beekeeping. He and I got along extremely well.
We first came across a place that looked like a bar -- it had young fellows loitering in front drinking something and loud music coming out. We inquired if they had tea but were told they had nothing other than milk there.
The rain had stopped by this time but it was still damp and smelled of a combination of fresh rain and wood smoke, with bluish-white smoke hanging in the air over low parts of the valley.

Monday, May 7th - On Monday we once again had lecture / Q & A training for most of the day.
That afternoon we drove up nearby Girakasu Mountain to a bee yard. This bee yard was located in a forest glade on the mountain. The beehives were all painted yellow (as are all frame hives in Ethiopia it seems). I opened up two of them and found that while the bees weren't completely disinterested in stinging they were as usual not nearly as aggressive as people, including locals, usually make the bees in Africa out to be.
Some of the bees had bee lice on them, which is actually the first time I've seen that. But most importantly, as pictured above, THERE WERE MONKEYS IN THE BEEYARD. Definitely a first for me.


Tuesday, May 8th - Training / Q & A all day. These beekeepers were by far the most experienced beekeepers I've met yet in training. Despite using mostly traditional hives, they seemed to have a traditional method of doing almost every beekeeping procedure and really surprisingly good knowledge of bee biology and behavior. They asked me some really in-depth questions. We finally had consistent enough power this day to run the projector.
This not being a coffee producing region, coffee here is usually prepared in the form of an espresso, with an espresso machine (yes they somehow have those). I'm not actually so fond of espressos so I drank a lot of tea here. I noticed that the third common drink consumed here is hot milk, drank in a tea cup. It appears to be quite a common choice of beverage. There's also a local beverage unique to this town called "korefu," which I gather is very strongly alcoholic yet only available in mornings. Despite my efforts I was unable to try any, mainly because I was always busy in mornings.
That evening I watched some fellows playing a game on the pool table in the hotel. It appeared to be basically like shuffleboard on a pool table -- the two players took turns rolling balls with their hand towards the one blue ball; after they'd each rolled all their balls (4 each?) the player with the ball closest to the blue ball wins the round and gets a number of points equal to the number of his balls that are closer to the blue ball than his opponent's nearest ball. 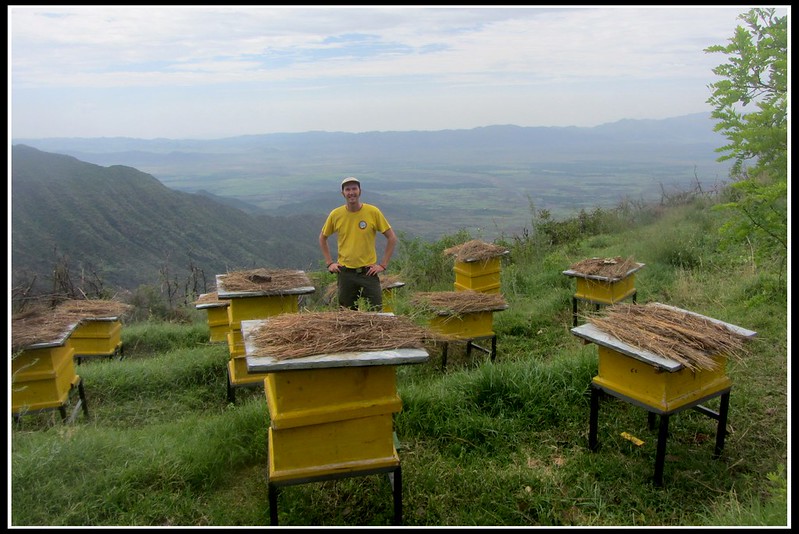 Wednesday, May 9th - Headed up Girakasu Mountain again, but this time we parked and hiked up through the forest to reach a different bee yard. The bee yard was on a ridge with a panoramic view of the western edge of the Great Rift Valley, and a waterfall on one of the nearby mountainsides. It was altogether a pretty awesome location.
Went through a hive. Once again the frames weren't spaced right and there was cross-combing and double-combing. Serious problems when it comes to actually making use of frame hives. This is what happens when the government orders people who don't know what they're doing to build 50,000 a year of something and sell them to people who don't know what it's supposed to look like.

After hiking back down the mountain we all returned to the hotel in Korem. There I demonstrated drone eversion -- that is, making a drone evert its endophallus, which is the sciencey way of saying it turns inside out and its inside-penis ends up on the outside. Then it dies. But its a cool trick. Then I gave my gloves to a beekeeper who told me he didn't have gloves but wished he did, and gave my bee suit to Girmay, and my last hive-tool to the local beekeeping cooperative organizer.

Then we returned to Mek'elle, with a brief stop in the town of Maychew again on the way.

Arrived in Mek'elle and got assigned the very same room in the Axum hotel again.
That evening Girmay came by and went with him by taxi and bujuj to a party near his place. It was "St Mary's Day," a day which is traditionally celebrated by parties among families / friends / or neighbours. And specifically it seems the same group tries to get together year after year.
There was a smorgasbord of traditional food laid out when we arrived at his neighbors house, as well as bottled beer and local beer ("tele"), which tasted kind of sour, unhopped, and of course not carbonated. Given the sourness I wondered if they used teff to make it.
I'd get about halfway through a beer before someone would come by and replace my beer, saying I needed a cold one. Presently people began dancing, with typically consisted of men and women shuffling around in a circle, mainly keeping their hands at their side as they went around. Around the time it transition from a food party to a dancing party my endless beer was replaced with a constantly refilled glass of johnnie walker black label whiskey.
There were a few forays into another sort of traditional dancing that involved some flinging of the arms about but it seemed only one man (the host incidentally) and one woman were confident enough to attempt it.
After everyone was good and intoxicated and the night was wearing on (around 1am?) a new phase began involving drunken speeches. The drunken orator would I believe express his gratitude for the bountiful party being thrown and express his hope that he'll see all the same people at next year's party and his further ambition that if the next year is good to him he'd like to host the party next year. I'm not sure how they actually decide which person will in fact be the host. Girmay confessed to me that he'd like to host it but he'll need to be married in order to do so.
Caught a bujuj-taxi home and once again was rather shocked that he didn't try to quote me a higher price than I knew to be appropriate. That night I woke up realizing I desperately needed to hydrate or I'd be in very bad straights considering how much alcohol I'd consumed. But I didn't have any bottled water! Ignoring the "don't drink the tap water!" advice I'd received before my trip (again though, they also told me not to eat fruit that hadn't been soaked in bleach water, gross!) I lurched myself to the bathroom and drank several handfuls of water.
The next morning I was feeling extremely slow due to the alcohol but never experienced any indigestion from the water.

The next day (Thursday) I toured the Comel Honey Processing Facility, but I think I'm going to make that the subject of a separate entry.