Having returned from Korem the previous day... 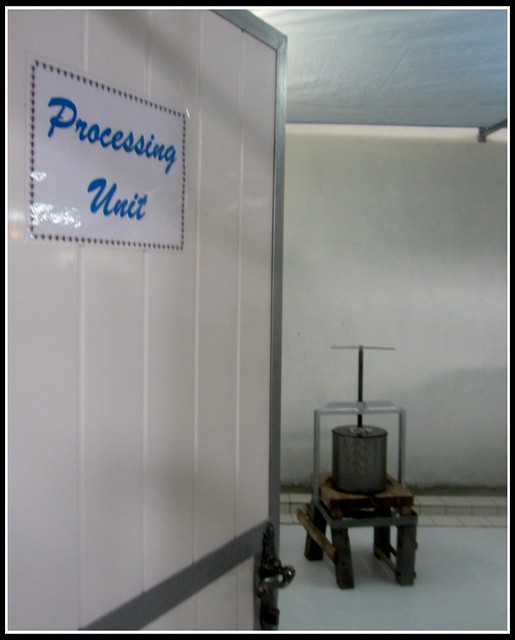 Thursday May 10th - Thursday morning I met up with the president of Comel Enterprises (Daniel). Comel began as an electronics retail company. But then one day Daniel was talking to someone from the Agriculture Department and heard they were distributing 50,000 modern frame hives per year. "So that's going significantly increase the honey production, what's going to happen with all that honey?" he asked. The Ag Department member just shrugged. So Daniel founded a honey processing plant.

The processing plant was big and new. Had a lot of room for expansion already, and they're planning on building two more buildings. They also had microfilters and homogenizers and all the other fancy equipment you need for some serious honey processing.
I had a great time touring their facility with them and talking to Daniel and their processing plant manager (who had been in my training class in Korem). I presented them with the refractometer I had brought, with which one measures the water content of honey. They already had one but they greatly appreciated having a second one so now they can send two people out at once to go buy honey from farmers.
In return they gave me four jars of honey -- one each of four of the five types of honey produced in the region (the fifth wasn't available at the time). 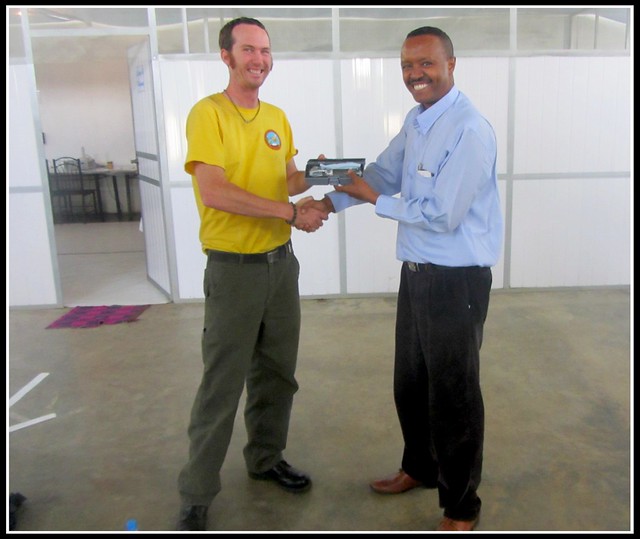 Later in the day the ACDI/VOCA driver showed up to take me to the airport. The guy in front of me at security had some honey confiscated from him. Foreseeing this kind of problem though I'd put my honey in my checked luggage.
Security wanted to x-ray my carryon bag again though, and again. And look through it thoroughly, X-ray it again, and then take some things out and x-raw it again. There was a pen showing up on the x-raw, which they wanted to find. Which was a bit odd, since pens aren't usually a forbidden item.
Kind of reminds me of how they found the hive tool in Addis Ababa but handed it back to me despite it being very weaponizable. Ethiopian security is thorough, and completely random.
While they were going through my back an older lady also got sidelined to have her bag gone through. She had a hand-held GPS they informed her she couldn't take on the plane. "But I was able to take it on the plane from New York to here!!" she kept insisting, which grated on my ears because it's an entirely fallacious argument.
Finally a compromise was reached -- she couldn't have it on the plane but security would let her have it on the condition she promise to hand it to a member of the cabin crew, and she'd get it back on arrival in Addis. This agreement was entirely on the honor system, they didn't watch her hand it to anyone. As it happens I did see her hand it to a member of the crew. Ethiopian security is weird.
After they had emptied EVERYTHING out of my backpack there was still that ghost pen showing up in the x-ray. Finally they handed the empty backpack to me. I asked if they ever found the pen and the lady just smiled, I don't think she did but the backpack was now empty.
As I was putting my things back in the backpack a hassled-looking American in a suit got sidelined to the inspection table. I welcomed him to the party. As I was leaving a group of australians was coming through (I swear the whole flight was ferringi), and one of them, a big loud fellow with a shaved head, was wearing skimpy running shorts. "Those your security pants?" I had to ask "discourages them from frisking me!" he said with a devilish grin.


Friday May 11th - Friday morning found me kind of in limbo. My original flight out had been a week later, and for some reason the Winrock travel agency was saying they couldn't change it from their end anymore. Furthermore the Winrock team in Addis wanted me to go immediately into another project teaching instrumental insemination to the people at the Holleta bee research facility near Addis. But I would much much much rather actually be able to PREPARE for something like that and review my notes on the finer points of amounts of things and stuff. And anyway I'd gotten it into my head that if I left now I'd be able to spend my birthday (the 14th) with Kori in Connecticut, so I was chomping at the bit to get out in the next 24 hours.
But I was tearing my hair out for awhile trying to even talk to anyone at Delta. The nearest Delta office was in Kenya and wasn't answering its phones. I tried calling Delta in America but that used up all the minutes on my phone in the first 45 seconds, way before I'd gotten anywhere in the phone tree. Finally skype saved me. I "subscribed" to skype so I had some credit with them and was able to call Delta in America through my laptop and make the travel arrangements.
To get any flight out in the next three days was looking to be like $1600 (the change fee alone, I don't even know what the underlying original flight was), because there were only flights out every two days and they were all booked up. I found this deeply alarming. But then I asked if she could finagle something creative, get me on a flight out to anywhere else that would then have a flight back to the States, and voila with a six hour layover in Istanbul it was on.

Unfortunately I didn't have time to see any of the museums in Addis (I really wanted to see the Lucy museum), though I was able to do a little souvenir shopping. Normally I hate souvenir shopping but I was determined to find myself a sweet drinking horn after seeing the magnificent horns all the Ethiopian cows sport.
It turns out making sweet drinking horns is apparently not something they DO though. We stopped in at more than a dozen and a half souvenir shops without any luck. In one the owner called someone who showed up ten minutes later with an old decrepid ugly looking excuse for a drinking horn.
Finally we once again found a shop where someone knew someone who knew someone who ten minutes later showed up with a selection of three horns for me to choose from. They all looked ancient and uglier than I had hoped (they were all nearly black and covered with leather, which is not what sweet drinking horns look like say when you google the subject). Still though it was better than nothing, even if preposterously overpriced. I haggled him from $50 down to $40 (keep in mind $50 is the average monthly salary of an educated professional in Ethiopia. The farmers seem to make around $12 a month). So, preposterously overpriced, but I was determined to get a drinking horn. 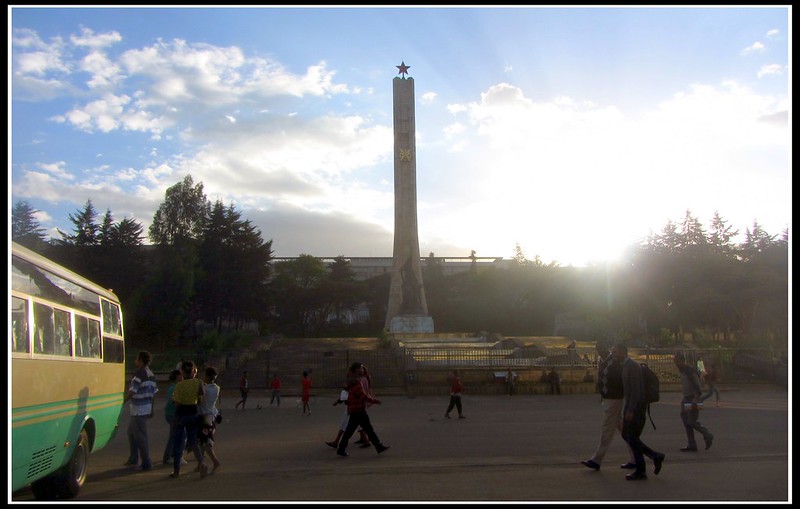 Saturday May 12th - My flight out was at about 1am the night of May 11th. Because Ethiopia follows the much more logical practice of considering the new day not to begin until around sunrise, I can still call this first hour after midnight part of the previous day.
I had just finished filling out the customs forms when a Russian fellow named Igor tapped me on the shoulder and explained in broken English "you need to help me -- I don't speak English!" (the forms are all in Amharic and English). Fortunately I took five quarters of Russian in college! Unfortunately I quickly discovered I barely remembered a god damn thing!
Then we got separated going through the emigration but as I was looking for a seat at the gate he waved me over from across the way and we continued trying to have a conversation with our meager bits of eachother's language.

During the night we flew over some islands in the Mediterranean, the outlines of which you could clearly make out by the twinkling lights, and I would have loved to know what islands specifically they were.

I still kind of regret not spending at least a day to get into the city. If I'd never been there before I certainly would have but as it is I remembered how far the city was from the airport and like I said, I was chomping at the bit to be home for my birthday.
As it is, I ended up spending much of my six hours there trying to chase down my luggage. I was bouncing between the "lost luggage" staff, who were telling me it would be automatically transferred to my next flight and to leave them alone, and the Delta airlines staff who were telling me there's no transfer agreement with Turkish and my luggage definitely did not transfer.
Finally a week later it would be delivered to me back home, appearing to have been run over repeatedly. Of the four jars of honey I'd been given, three of them had been utterly pulverized. Even my deoderant stick, which is not a fragile object, was smashed.

I did at least get to sit down and have some turkish coffee in the airport. The coffee and a croissant came out to $14. Being accustomed to a meal like that being less than $2 in Ethiopia it gave me a "welcome to Europe!" rude awakening.

Sitting at the gate for my flight I sat next to a fellow who used the most amusing profanities to describe his disgust with airlines, when it was announced the flight was running an hour late. And then when I boarded my flight I was surprised to find that my assigned seat was in fact right beside him. That coincidence, however, is utterly dwarfed by the coincidental seating occurrence on the last leg of my journey, from Atlanta to OC, but you'll have to read about that one in my next entry ;)