I just wrote this entire thing and was on the second-to-last paragraph (had just written "and now for the most shocking coincidence") when LJ borked out and lost the whole thing (and apparently didn't autosave!), so this is take two. Anyway, this is the last leg of my recent journey. Previously I had left Ethiopia and, via Istanbul (where I found out my luggage was lost) headed for NYC. 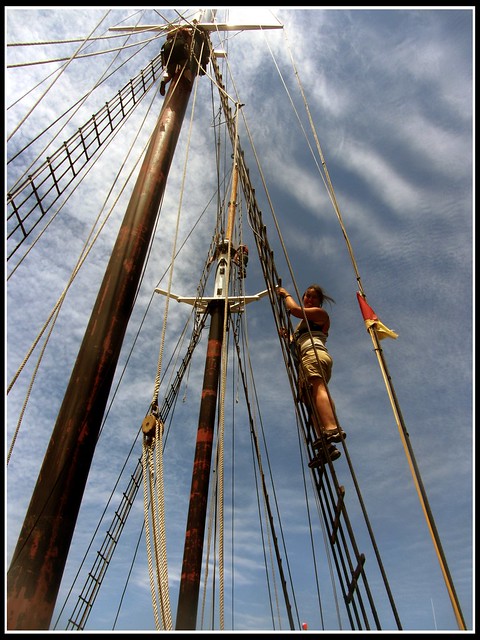 Saturday, May 12th - At 8am on Sunday I found myself working aloft, 70 feet up the mast pictured above. While I was up there I reflected that at about the same time the previous morning I had been sipping Turkish coffee in Istanbul.
I got in to NYC at JFK Saturday afternoon. My phone was dead and the recharger had been in my lost luggage, so I had to depend on skype on my computer and free wifi to do any communicating. This made life interesting and necessitated ordering more starbucks coffee than I'd have liked, esp since it really tasted inferior to the coffee I'd grown accustomed to in Ethiopia.
Nevertheless several hours later I arrived in Bridgeport, Connecticut. In bridgeport Koriander has been working on the schooner Unicorn. The Sail Training Vessel Unicorn (STVU?) is a two masted schooner that has been laid up all winter and at this time was about a week from it's first sail of the year. As such they'd been working their buts off putting all the spars (yards, topmasts, gaffs and booms) and sails on.
The STFU has an all-girl crew and takes only girls aboard in its "Sisters Under Sail" program. They wouldn't even let me spend the night on the boat! Though they'd let me help out with the uprig. 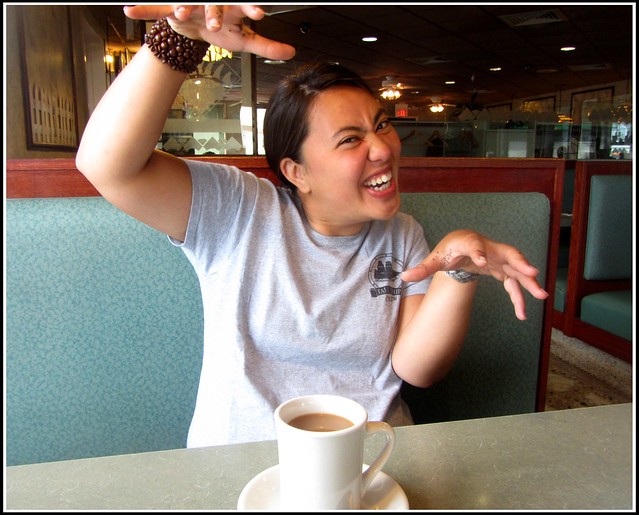 Sunday, May 13th - There were also a number of Xylocopa virginica --carpenter bees-- buzzing around the dock. I made friends with one: 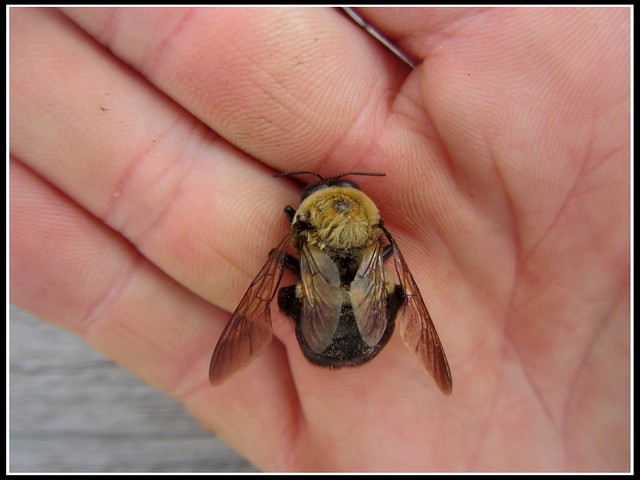 Monday, May 14th - I'd been dreading my 30th birthday for years. I had also often wondered, especially during 2011 (the year of every plan falling through) what I'd be doing on my 30th birthday.
As it turns out I had just returned from a second trip to Africa and was working on a tallship. The recent trips to Africa did a lot to help me feel better about it -- realizing that I have skills that can be of great benefit to humanity.

Kori was able to get off work early at around 21:00 (yes that was early!), and we were able to find a restaurant that was still open and had some delicious cake. Kori gave me a pack of socks and a toothbrush for my birthday, and I've never been so happy to receive such mundane things (recall, my luggage was lost, I'd been wearing the same socks for three days) 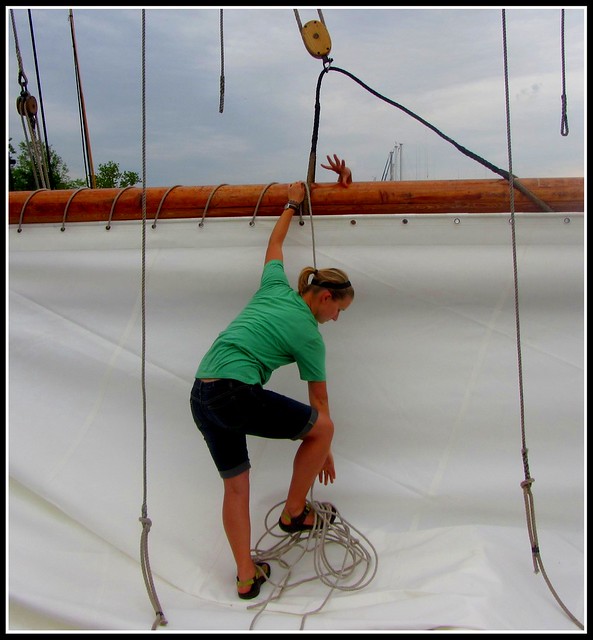 Tuesday, May 15th - was another day on the boat. I had probably written something witty and interesting about this day the first time I wrote this entry.

Wednesday, May 16th - I had to flight to catch at 14:50 to head back home. Unfortunately, this was the day the Unicorn was finally getting off the dock for the first time and doing some maneuvers -- and it was doing this at the time I needed to leave the boat to go catch my train to NYC (around 09:20).
I was able to leave a little later, the boat was still out maneuvering but I went ashore in the smallboat Pegasus. Incidentally that's exactly how my first journey to Africa began -- leaving the tallship Hawaiian Chieftain in the smallboat Pele to get ashore and catch a train.
Fortunately I had planned an extra hour in my trip in case I missed any connections or encountered any delays. So this ate up that hour - I could still make it but without any delays.
...there were delays. I arrived at the airport around 14:30. Just in time to pay $150 to reschedule for the same flight the next day.

Phone was still dead. Once again turned to skype to try to contact the world, and this time skype helped me not only in making the phone calls but I was able to log into the non-free airport wifi and have it billed through skype by the minute rather than pay the $7.99 one day fee the airport normally wants. Skype has really helped me a lot on this trip.
My friend Pavel told me to come to his work downtown so I made my way there. He happens to be a programmer at a company that writes programs for cell phones -- so they had every imaginable recharger on hand! So I was finally able to recharge my phone.
Pavel said I could crash at his place but Kori talked me into coming back up to Connecticut for the evening -- the first mate had even said I could sleep aboardship that night. 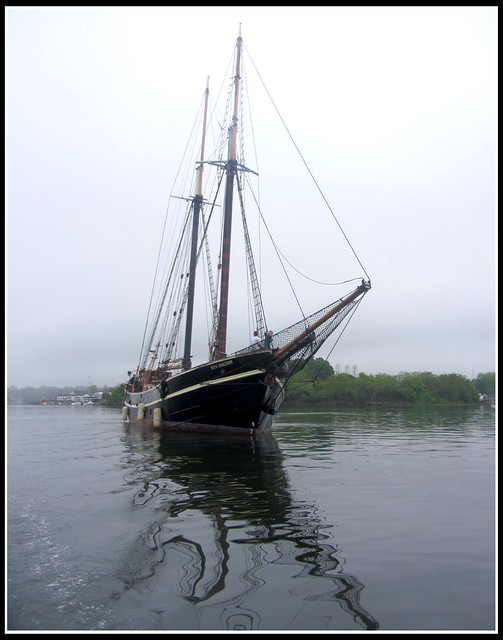 (The view as I departed the Unicorn)

Thursday, May 17th - Kori actually had the day off so she accompanied me into NYC as far as Jamaica Station, where I boarded the airport tram.
As they scanned my ticket at the gate the machine beeped and printed out a new ticket stub -- this one listed my seat as 1D. Having accrued over 25,000 miles on Delta by now, I'd been upgraded to "silver medallion" frequent flyer status, with automatic upgrades to first class if available.
In first class they were bringing us complimentary beer and wine before everyone was even seated. There was plenty of legroom, and the food actually tasted decent! I don't know where they found this relic of an airplane though -- it had no screens for watching movies!

And now the most shocking coincidence: My flight home had a layover in Atlanta, and so had my flight out to Africa five weeks ago. I take my seat on the flight back to OC and who do I find in the seat next to me? The exact same guy who sat right beside me on the flight from OC to Atlanta five weeks ago!!!! Not in front of me or across the aisle but once again in the seat directly to my left. The same dude. Five weeks later! He'd been there and back twice in that time though.

My parents met me at the airport in OC and we immediately proceeded across the street to an El Torito restaurant where I had a delicious burrito and a margarita.


Epilogue A week later my luggage finally arrived. It appears to have been run over -- things that aren't even fragile, such as my stick of deoderant, were smashed. Of the four jars of honey given to me at the honey processing plant three of them were utterly obliterated. So the inside of my luggage had been soaking in hoeny filled with glass shards for a week. Surviving objects that were not shattered look like they have shrapnel pockmarks from the glass shards.