In Which I Sail About on the East Coast

Flew in to New York a week and a half ago, Saturday, June 9th. Met up with my friend Kerri and we went barhopping with her roommates. I always love barhopping in NYC (well usually we do it in Brooklyn) because the bars are open till 4, there's still subways running when they close, and there's such interesting bars. The most interesting one we visited this time was one in the style of a prohibition era speakeasy. The decor was all very 20s, drinks were served in teacups, and there was even a staff-only door disguised as a bookshelf.


Sunday, June 10th - Took the subway to the LIRR to Oyster Bay. I love the NYC public transit system... but I also hate it. I always seem to run into unaccounted-for delays, service temporarily not stopping at the stations I planned on, which then throws my entire travel plans into disarray. Everyone else I suspect uses their smartphones to avoid these issues and/or make immediate well-calculated contingency plans. In previous visits to New York I was able to at least find a brochure with a map of the transit system on it but in this entire trip I never once found such a brochure.
Also I couldn't even find a wall map at many stations. Not when I transferred from the airport airtrain to the subway, and not at the second station after that. A week later when Shadow and I (his real legal name!) were traveling about the city we once again couldn't find wall maps in many of the stations.
So suffice to say I missed the LIRR (Long Island Railroad, the rail line serving points east of the city) train I needed and had to wait two hours for the next one.
Once on the train it was about an hour transit to Oyster Bay. Once there I got off the train and walked toward the water. Sighted the schooner Unicorn's mast over some trees and homed in on it.
Schooner Unicorn is ordinarily a girls-only boat, but for this week only the girls were allowed to bring a friend even if said friend has a Y chromosome! Her Korianderness was kind enough to invite me. We were additionally joined by a fellow named Brian and this fellow Shadow, friends of other crewmembers. Both had spent some time sailing on another tallship so we all somewhat knew what we were doing. We were also joined by Captain Moreland (another male fellow) of the ship Picton Castle, our guest captain for the week.

Monday, June 11th - Sailed northeast across the sound and anchored in the shelter of Sheffield Island (Affectionately known locally as "tick island") on the Connecticut coast.

Wednesday, June 13th - Sailed from ??? to King's Point (which is right across from the delightfully named "Throg's Neck." And Kori made this delicious morsel: 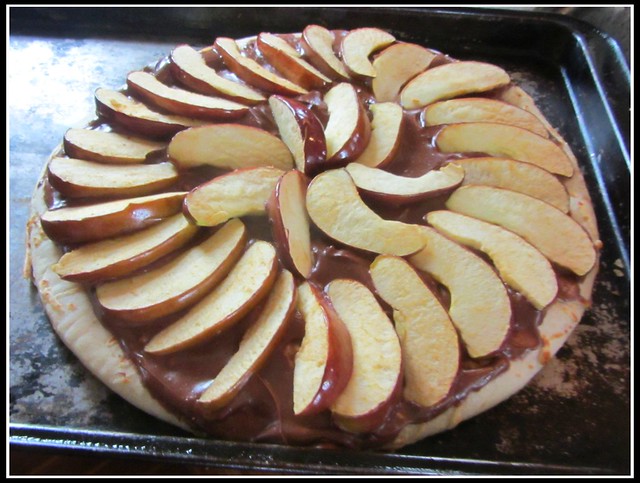 Thursday, June 14th - We sailed all the way around Manhatten and up the Hudson until we were just north of a town called Haverstraw (should be marked B in this link, with the green arrow at where we started in the morning). 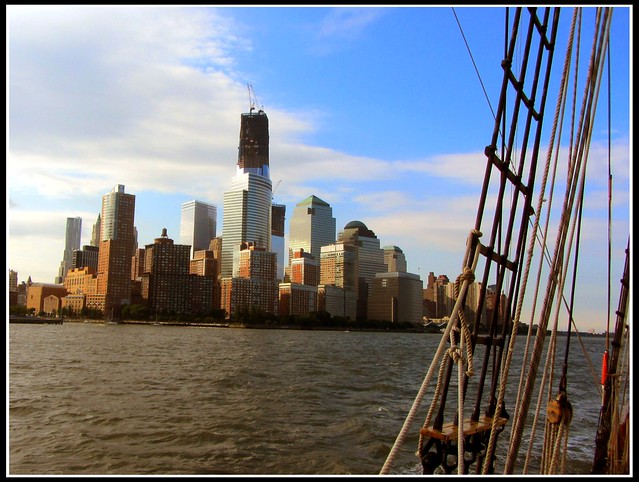 Then We sailed up to West Point Military Academy. There we were able to dock at the West Point dock. I'd of course heard of West Point all my life but no one ever bothered to tell me that WEST POINT LOOKS LIKE A FRICKEN PETER JACKSON TOLKIEN FILM FORTRESS!! 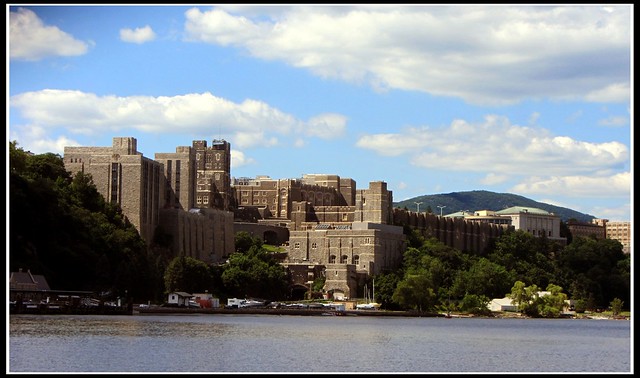 The above picture doesn't even do it justice. There's nothing anywhere near as big for miles and miles along the Hudson banks and then this giant THING.

And then the girls took a nap on the jibs: 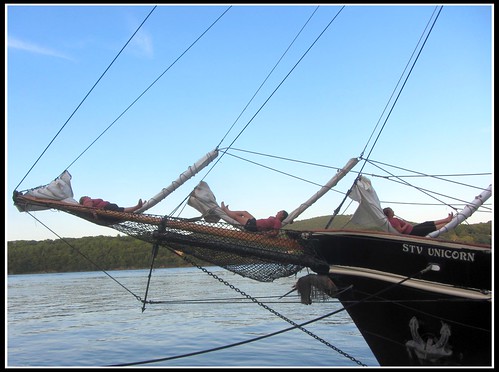 Saturday, June 16th - Originally I believe I'd been told I didn't have to be off the boat until Saturday morning. Then Thursday I was told I needed to be off Friday evening. Then Friday evening I was told I could not only stay that night but as long as I was scarce during the day I could stay Saturday night as well! Capt Moreland fled as soon as he could once we were tied to the dock and Brian left before we learned we didn't have to disappear immediately but Shadow was able to change is travel plans.
So Saturday morning Shadow and I got ferried across the Hudson in the smallboat (the Pegasus) and took the train into the city. There we poked around the Southstreet Seaport and met many friendly people there (who invited us to go sailing on the schooner Pioneer but unfortunately it didn't fit in our schedule), and toured a museum of Native American art. Then Shadow caught a megabus and I took the train back up to Westpoint.
That evening while walking about Westpoint, Kori and I both saw fireflies for the first time and tried to catch them. 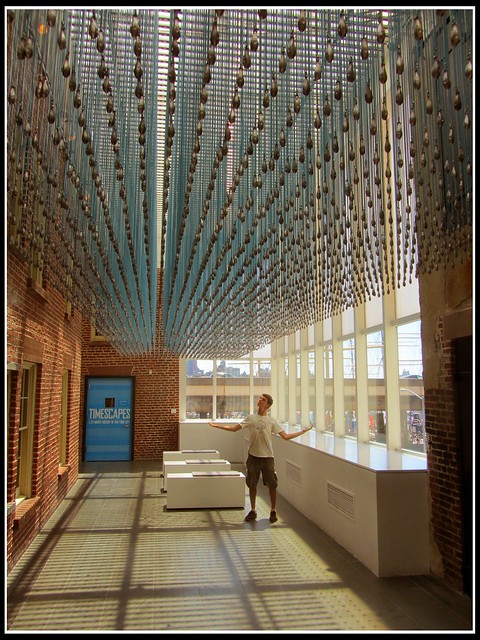 Sunday, June 17th - The girls were off till noon so Kori and I took the time to stroll about Westpoint. The inside of the castle-like parts seem kind of like an escher drawing. We also found this fun-looking tank thing. And some cannons: 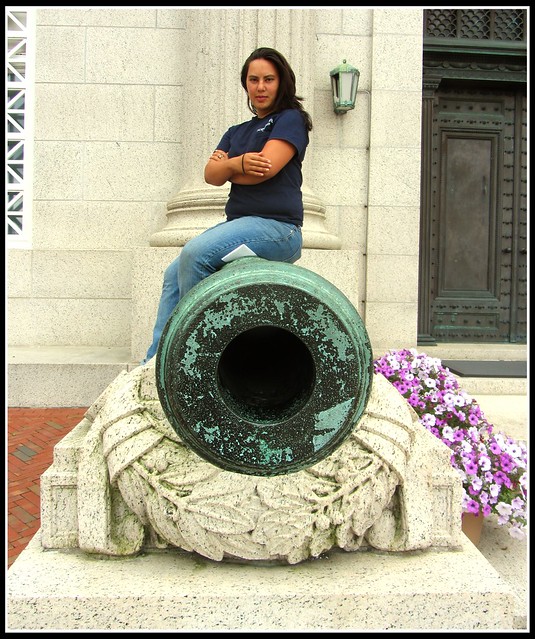 But then I had to go. Rode Pegasus back across the Hudson, took trains up to the town of Shnectedoodley. There while I waited to rendezvous with my friends I stumbled upon a farmers market. I sought out the local beekeeper and as soon as I walked into their booth the girl working there said "are you a sailor?" followed by "I have a friend who works on a tallship... the Lady Washington?" Not anyone I'd heard of but it was a funny coincidence.
My friend Jenny (a shipmate from the Hawaiian Chieftain) and her roommate arrived presently. They were on a roadtrip from up by the Canadian border in Vermont headed down to see their boyfriends in Philadelphia.
We proceeded on down in her car (the evil elf mobile) to a campsite in some obscure place called Elizaville. See also this interesting fact of the region.

Monday, June 18th - The girls dropped me off by the train station in Poughkeepsie and from there I took the train back into the city. The illustrious (illustrative?)

zianarratora awesomely let me crash at her place but first we went to a whiskey tasting.. which was quite excellent. We also had many good discussions.

Tuesday, June 19th - Once again my carefully planned use of the public transit was thrown into disarray immediately when I attempted to get to the airport. Fortunately I planned to arrive at the airport two hours before my flight, whereas you of course only really need to be there one hour early for domestic flights.
But yes at the very first station, I needed to catch a flushing-bound 7 train and apparently those trains weren't stopping at this station at the time. So I had to catch the 7 bound for the other direction and get off at that terminal in hopes it stopped there. Which it didn't. So I had to ride the rail another station in the wrong direction in hopes of catching it.
Despite the delay I still got to the airport half an hour before I needed to. At the check in kiosk I had to wait like 20 minutes because some rastafarian was having a huge argument with the staff. When I finally got to talk to the person I discovered my flight was actually out of Laguardia. I don't know how thiat happened because I very specifically request flights out of JFK (LGA is impossible to get to) and try to keep a close eye on the booking matrix's attempts at changing the destination variable but apparently it slipped a fast one one me. All of a sudden my early arrival turned to desperately low on time!
Wasted another ten minutes waiting for an inter-airport bus which they kept saying was "just minutes" away. Finally after ten minutes they informed me it would be another ten minutes. At this point I should have checked in at the airprot ACROSS TOWN 3 minues ago. So I caught a taxi instead.
Arriving at LGA with just half an hour till my flight I was actually able to check in still. Security of course sidelines me for special inspection and while waiting for them to take their jolly sweet time of it the final boarding call for my flight was sounding over the PA. But in the end I managed to get on my flight. The End