The Fricke Museum of Natural Science

My parents' house contains numerous interesting and unusual curiosities such as a large whale rib bone, a very well preserved dessicated sea skate, large natural halite crystals (mum and I hacked them out of the Serles salt lake)... even the cat's gotten into it -- when I returned from Nigeria the first time I found Pelcat had made good on her interest in local native American culture by constructing a wigwam in the back yard*. When I dug up a large yellow jacket nest last year I asked the parents if I should donate it to "the Fricke Museum of Natural Sciences" because it was kind of neat. It now resides in the garage (without any Vespula germanica living in it anymore).
Also there are numerous beehive bodies in use as various things like lamp stands throughout the house.
Just yesterday a large box arrived by post. My dear mum,

furzicle, a science teacher, exclaimed "oh my beetles are here!" The next day there was a letter in the mail, which when opened was found to contain little vials full of live ants. (I've always wondered mightily what it must be like to work in the giant ant farm that makes the ants to put in ant farms. And for that matter I guess I should add beetle farm to that curiosity.

Upon my return from my most recent trip I found the Fricke Museum of Natural Science (FMNS) has acquired a new addition -- has brought the large frogs that normally live in the classroom in for the summer. Accompanying them is their cricket food supply. The house now sounds like a forest, with the unflagging chirp of the crickets.

"You know, I think I like the cricket more than the frog" mother reports. Also offering "friendly" when I asked for a word to describe the sound of the chirp.


* You may disbelieve that a cat named Pelekea Cachaça would be interested enough in anthropology to construct a wigwam. Well I can tell you when I returned I found she had taken to sleeping in a hollowed out area in some dry grass that possibly due forces other than cats performing reconstructive archeology had woven itself into a roof and sides. 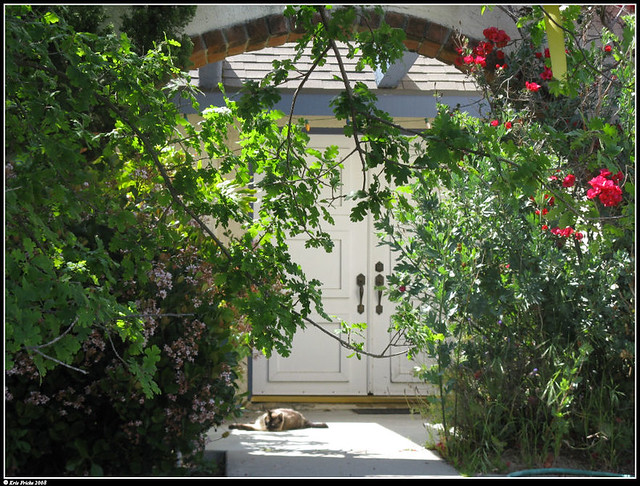 The front entrance to the Fricke Museum of Natural Science, bravely guarded by Pelcat.