I used to think I had a terrible debilitating addiction to computer games, because I'd find myself unable to resist playing them when I should have been doing something more useful. It doesn't necessarily help that in my mind the area of time included in "time when I should be doing something more useful" has often been "all the time."
In college I'd find an hour or two a week to sneak in some Civ III, and feel like an awful person about it. Later though I'd successfully ban myself from playing any computer games for large periods of time... and find I'd still waste the same amount of time. Sometimes the brain just doesn't want to be useful.
Recently I've had a lot of time on my hands, since I'm sort of between jobs and such. I still have a list of "useful" things I think I should be accomplishing, many of which would not be too painful to actually do (like use my copious free time to write some stories I've been meaning to write), and have even avoided playing any games for days at a time, only to find I can waste an astounding amount of time and I don't even know what I did with it ("was I just reloading email and facebook for the last hour??"). It seems like I have some avoidant urge in my head that just will do absolutely anything to avoid doing anything I've deemed as useful. d:
I mean even to the degree that I decided two weeks ago to try to write an LJ entry a day and though I have ideas, even that writing hasn't much happened.


So Civ III has been my game of choice for oh at least the last ten years. I like it a lot and really the only complaint I have with it is the AI isn't smart enough to challenge me and there aren't many people around who still play it to play it against multiplayer (and as games go on a looong time it's not even the most practical multiplayer game).
I had purposely remained in the dark ages and avoided getting Civ IV or Civ V because I thought I was hopelessly addicted to playing Civ and it would only get worse if I tried a presumably better version.
Well, with all my free time, I finally got Civ V a few weeks ago. And found... I didn't really like it much. And didn't play it any more than I'd wasted time doing anything else. Then I got Portal, and also found, that while it's a neat game, I also didn't find myself suddenly addicted to wasting any more time playing games. It was kind of a shocking revelation, basically like realizing I didn't have a problem I'd thought I had for years. Well games aren't the problem but I still need to find a way to fight this weird urge not to ever do what I feel would be a useful thing to be doing.

But this entry was supposed to be about Civ V. So I'm going to change focus right about here, people interested in my own psychoanalysis can tune out at this point and gamers can tune in now. I think Civ V kinda sucks.

I played for at several hours on the tutorial difficulty setting, over the course of several days because it bored me to tears and nothign was happening. Started another game on a smaller map with more civs and a higher difficulty and still found myself totally bored with it. My most recent game is at the intermediate difficulty level, small map, twice as many civs as are standard on that map, in order to force early interaction, and I was still pretty bored for the first few hours. Then I was disappointed with the ease with which I was taking over everyone else's cities. Finally several civs turned on me at once and nearly overran me before I was able to retake my land and most of one of theirs. That was more stimulating, and now there's another civ as big as me and much more technologically advanced so there's a challenge.

I'm a bit annoyed they've made it so you can't customize your civilization like you could in Civ III. Not only can you not name your civilization, you can't even name yourself (the leader) anymore. Even the cities, while you can go in and change their names, by default just give them a name from the list of city names it uses from the civilization. Also I liked to name my ships, it may seem like a silly thing, but it made things a little more fun thinking of my ships as specific named vessels rather than just the ship unit that happens to be on that tile. As far as I can tell there's no way to name ships in Civ V. 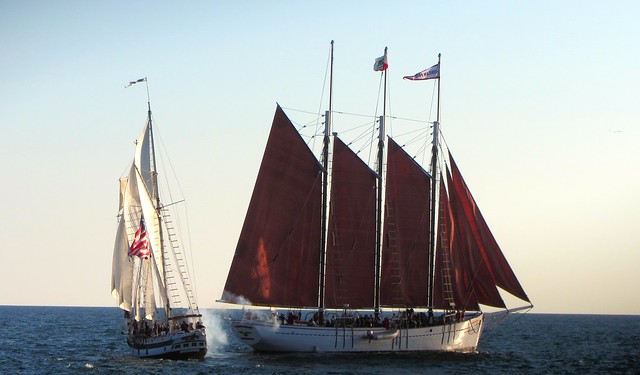 Also on the subject of naval units (what can I say, I'm a sailor, naval combat is important to me), I have several complaints about their units.
(1) Naval units can only bombard in Civ V, rather than "melee" fight -- this might make sense for modern warships lobbing shells at eachother a dozen miles away, but triremes would have done most of their fighting either in boarding actions or through ramming (both of which would be closer to "melee combat" then ranged bombardment), and even in the age of cannons most battles were settled "yardarm-to-yardarm" at pistol-range (also would make more sense calculated as a melee combat I think).
(2) both Civ III and Civ V make the mistake that larger sailing ships (frigates, ships-of-the-line) go slower in the game than smaller vessels (sloops and corvettes in Civ III Rise and Rule). In Civ V caravels go faster than frigates, which, not only are frigates bigger, they are a much more advanced design than a caravel and should definitely be faster. You see, while I suppose their logic is "something that big must be slow," you need to keep in mind the sail area is kept roughly proportionate, but the bigger vessel has much much more inertia to push through waves with. Additionally there is a matter of physics I don't entirely understand but the bottom line is the longer a hull is the faster the vessel is scientifically able to go. Some of the fastest ships in the world today are the nuclear aircraft carriers, which, though the size of a city, can barrel through the sea at a mind blowing 80+ knots (92mph!)
(3) Destroyers, if I recall correctly, are the first motorized vessels to become available in both games, followed by cruisers and battleships. I always thought it was a bit odd that the fastest ship becomes available before the others, and then

alexpgp pointed out to me the other day that destroyers were only invented to counter the threat torpedo boats posed to cruisers and battleships. I think the game should have cruisers come out first followed by battleships (the cruisers essentially standing in for the battleships of their day, eventually outclassed by the later battleships), followed by torpedo boats which have a huge combat bonus against them specifically, and then you have to develop the technology that allows destroyers before you can counter that threat.

Another thing that bothered me in Civ III when one got to the modern technological era was that the keystone and many components of the strategic picture of the 20th century wasn't there -- the nuclear trio of stratectic bombers, ICBMs, and SLBMs (submarine launched ballistic missiles). US and Soviet strategy both hinged on having all three of those ready to go at any given time, as they all have benefits and downsides, but the game completely lacked a nuclear bomber capability (strange too, since it's the only way the bomb's been used militarily). It would have also been really cool I think if they made it so your nuclear weapons could launch on warning in massive retaliation, ie, if someone nukes you, or you nuke someone, instead of waiting for your turn to second strike them, after they've already moved troops as far into your territory as they can in one turn, your nuclear weapons would fire at pre-designated targets immediately after the attacker used a nuke, during the attacker's same turn. While many of the other things I could fix with the game editor if I really wanted to put the effort in, that's not something I could do. I don't know how Civ V deals with the modern era yet though.

Really the only thing in Civ V I feel is a real improvement over Civ III is that I like the hexagonal tiles better than the square ones.

See Also: My thoughts on what would make an awesome real time strategy game.


And in some particularly abject nerdery, here's some of my favourite things to name ships:

Note I like the prefix HMS, even if I'm not England, I think it sounds nice, and what else matters when you're naming your own ships in a game only you will see.


And many more besides, obviously, but these are some of my favourites.
Tags: civ iii, civ v, games
Subscribe