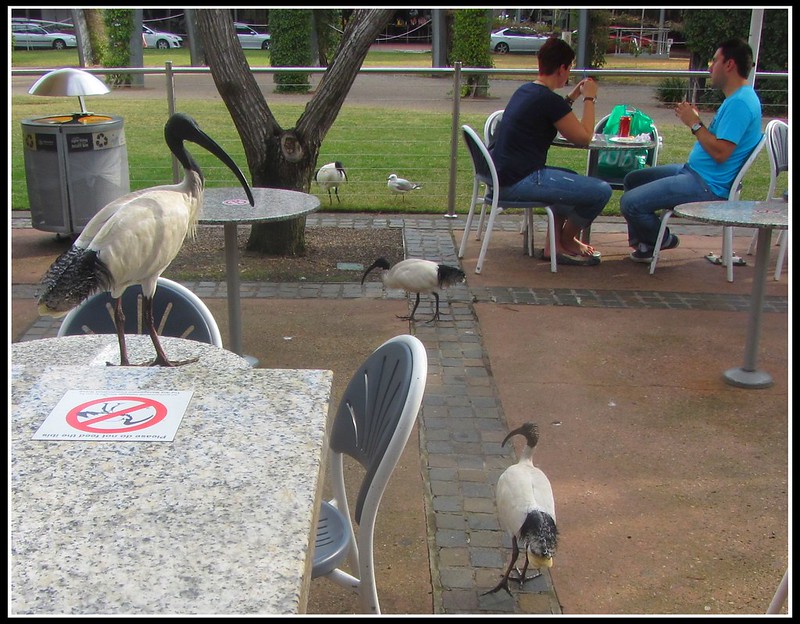 Well I've been slacking on traveloguing here. I got one entry out and then quickly sunk into a quagmire of "too much to report" / "no time to do so" / "lack of reliable intertrons.

The first few days I mainly just explored the city. There appeared to be a parade or protest through downtown just about every day. I also encountered bagpipers somewhere in the city on 3 of the first 4 days.
The parade on the second day was kind of neat -- it was the return of the Queensland olympians (London olympics had ended just the day or two before you'll recall). I've never seen anything like it in the states, so it was kind of neat to see a bunch of Olympians all parading along in their official uniforms and festooned in their medals. I even got to hold a real live olympic bronze medal for a moment, which I thought was pretty keen.

Wifi at my hostel was overpriced ($8 / day) so I tried to find reliable free wifi but was ultimately unsuccessful in a viable solution. Wifi was good in the beautiful botanical garden, and it was certainly a nice setting computering at a picnic table in the shade surrounded by the silly antics of ibises and giant lizards, but there was no power plug there so I was limited to about an hour at a time.
McDonalds free wi fi was just reliable enough to make one want to bash ones head against the wall as it takes ten minutes to open one email.

The most surprising thing about Australia is not the unusual animals. I was expecting that. But the economy has been a shocking marvel I've been trying to get my head around ever since I got here.
Minimum wage is $16. Compare that to California where last I heard it was around $7.25, and I think Federally it's still 5 something. My general impression has been that everyone at the bottom of the food chain in California pretty much gets around minimum wage, and young people working in an office w/o a college degree generally can hope to get around $12-15. Here DISHWASHERS make $19/hr! (that's in AUD, but currently 1 AUD = 1.04 USD)
Obviously this has an effect on prices -- and pretty much everything costs an amount that triggers my "that's a scam!" gut reaction. There's no getting a bite to eat for lunch for less than $9, and for that I'm still going to be hungry. In California I could always find more than enough for lunch for around $6.
It rather boggles my mind that companies can afford to pay all their unskilled labor such extremely high rates and still make money. Lord knows I spent many a year fighting to inch up the payscale a quarter at a time, making less than what's minimum here, with employers always saying they'd love to give a raise but couldn't possibly afford it.
At the idea that I have worked for less than $16, one of my hostelmates pantomimed his opinion of the alarming things he felt my employer had been doing to me from behind. A few days later though his boss informed him he would not be paid the $1000/wk he had been promised, but rather $600, and he told said boss where he could shove it and quit.
The other lad that was staying semipermanently in my hostel room (6 bed room) said prior to his current position he had been picking strawberries at $800 / 35 hr week. That works out to $22.86/hr! And in California strawberry picking is only done by questionably-legal immigrants who have no rights and I'm pretty sure make significantly less than minimum wage! (It's actually my theory that the entire reason the immigration situation in the States DOESN'T get fixed is because Big Agriculture wants a steady supply of employees who have no rights because they're not legally there). Mind boggling.
So there were many lads in the hostel who had come here from various other developed countries looking for high paying unskilled work. Jobs must not be too hard to come by, because, for example, I would never recommend anyone just drop into California and hope to find a job, while running up the kind of living costs one does here. Nevertheless many of them were a bit green with envy that I had just showed up and had a job waiting for me here.
I think there is kind of an impression in the United States that everyone else in the world would rather be there. Certainly when I was in Nigeria and Ethiopia that was true. Here in Australia though, everyone in the hostels at least seems to regard the US as a silly place where things can be had for cheap, but there's no pay -- so it's a fun place to maybe go for vacation (and no doubt smile apologetically at those unfortunate enough to work there). 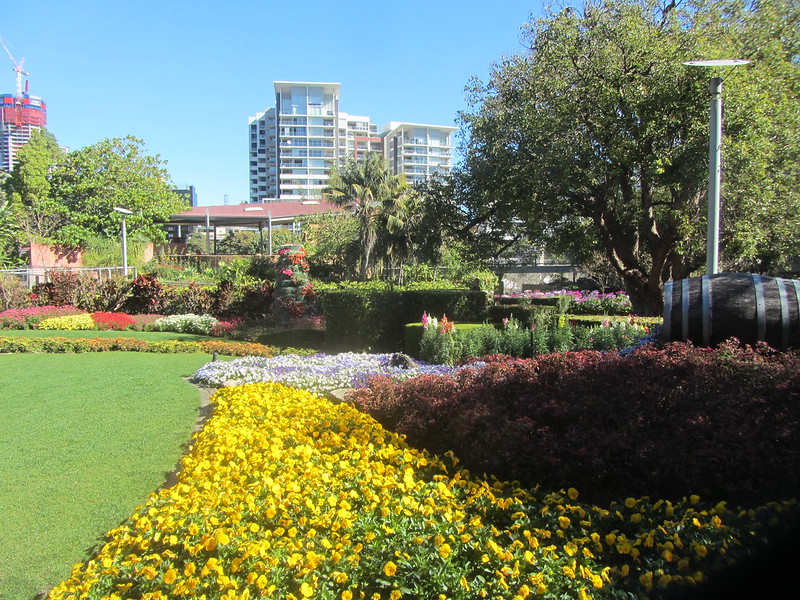 After a few days of lollygagging and seeing the sights, I started seriously looking for a more permanent place to stay. They have a craigslist-like site called gumtree.com.au (which I think I read in small print somewhere is an Amazon company?), which I perused until my eyes were bleeding. Housing is, understandably, more expensive here, but once you accept that you are going to be paying around $1,100 - $1,200 per month (for either a studio apartment or own room in a house or suite of apartments), there's actually a whole lot of really nice places! While I love the place I eventually decided on, I almost find myself hoping I eventually get a chance to stay in one of the many delightful little houses I found. Additionally, many of the potential housemates I dealt with in the housing search seemed like really nice people (and today, for example, I'm going for coffee with one of them!)
In the end I ended up choosing an apartment in what I think you'd call a "luxury apartment building" just a 5 min trot from the center of the city, and right beside the absolutely gorgeous "Roma Street Parklands." It's on the ninth floor and has balconies on three sides, also a lap pool and hot tub downstairs. There's 7 of us living here, all internationals, but it doesn't feel crowded, and, I figured, not knowing anyone here yet, it would be fun to have a whole heap of flatmates.
We have 2 girls from Colombia (I've been here several days now and haven't even seen one of them yet), 1 girl from Korea (about to replace herself with another girl from Korea), there's an Indian fellow who doesn't live here but is dating the Korean girl so he's always here, 1 Turk (+2 other Turkish friends that come around sometimes), 1 Frenchman, and myself. The guy whose room I took is also on the couch for a few more days before he returns to Taiwan, and we've been getting along great. The Indian works in a meat packing place, Frenchman's a dishwasher (reports lack of job satisfaction with that), and Taiwan (Eric) has been working in a 7-11 here despite having a degree in electrical engineering. Eric has declared we'll have a barbecue tomorrow evening. 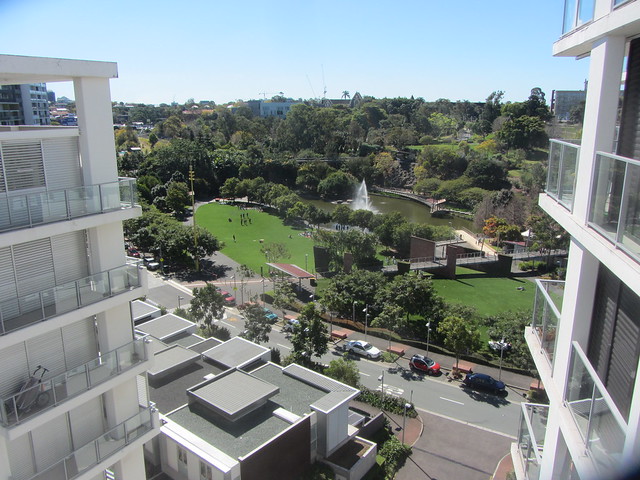 Started my job on Thursday. So far (all two days of it), I've only been doing the least glamorous part of beekeeping -- cleaning old hives. It's of course the very end of winter here and we're preparing everything for what looks to be a booming year. My boss and his family all seem extremely awesome and friendly though. Murray is "the boss" - he's in his thirties, smart and laid back, and has worked in a number of different countries himself. His dad, Len, had started the beekeeping business originally but now assists him, and is the classic funny wisecracking older fellow. Murry's mum works in a pharmacy but does the financial stuff for the company and does motherly things like load me up with all the blankets and towels and dishware I need.

Well I reckon that's enough for now. I'll try to write entries more frequently -- there's so much to report. In general though, compared to California the city is extremely clean and has amazingly nice parks and civic structures, and a very very well developed public transit system (the busses have their own roads! Including a meercat-warren-like network of underground tunnels) -- to sum it all up, it's like an optimistic utopian vision of future California.