So 9 germans, 2 frenchmen, and a finn walk into a room... Its not a joke, its the party we had here on Saturday night. But before we get there let me start earlier in the day.

Saturday morning the two Brazilians lads who are moving in. They're taking the room the Turk was in, and the Turk will be on the couch for about a week before moving somewhere else. The Brazilians (Salvadore & Luann) seem really nice.
An alarming controversy developed, however, when the Turk informed me that _I_ had to give MY key to one of the Brazilians. As bizarre as this sounded, he got the landlord on the phone, who informed me that yes, Eric (aka Taiwan, whose room I took) shouldn't have had the key in the first place and/or shouldn't have given it to me. Meanwhile, the Turk for some reason had two keys, of which he gave one to one of the Brazilians and the other to one of the girls who's already been living here (keylessly, apparently). Why he was sitting on two keys but couldn't be bothered to give them both to the guys who inherited his room I can't imagine, though I began to suspect, to use terminology from last entry, that he might, perhaps, be a dick.
Eric is allegedly pretty well to blame for it as well I guess, and I haven't talked to him about it yet, but it's hard for me to think so ill of him, I had a very favorable opinion of the fellow.

Well I was hungry, and our toaster wasn't working, and it was a lovely day out, so I was itching to get out. So I asked the Brazilians permission to take my key with me and went out. Paid $9 for an unsatisfactory amount of food, as usual, and did some errands.
Then I run into the two Brazilians again at a food court, ordering some food from McDonalds. They try to talk me into getting something but I find I have an almost religious aversion to partaking of McDonalds. If I try to seriously envision McDonalds food traveling into my stomach I start to feel sick. To me, it simply is not food. Go ahead and call this a first world problem.
While talking to them three more Brazilians one of them knows show up, and introductions are made. Amid the "oh you're Brazilian too?"s exchanged between them I have to admit to being only half Brazilian ;) (my dad was born there).
Salvador and Luann also invite me to go to the Sunshine Coast beaches north of Brisbane with them on the morrow (Sunday).
I then accompanied the Brazilians on a few more errands about town and as we were returning to the apartment building we ran into The Frenchman, also on the return.
The Brazilians set about thoroughly cleaning the apartment (it had recently suddenly fallen into an extreme state of untidiness, I'm not sure why. All of a sudden the sinks, previously always clear of dirty dishes, were completely full with every dish dirty overnight). As evening wore on I found myself left alone in the apartment, the Frenchman having departed with my key (someone else having departed with his?)... and when fireworks began to go off from somewhere very nearby (It's "Brisbane Festival" this week, whatever that means) that I couldn't see unless I left the building, I experienced the first inconvenience of not being able to leave for not having a key and no one to let me back in to the building. ):
Presently people began to drift back in. The Frenchman had advised us that he was throwing a party at our place, to which we should expect "5 german girls, 3 french girls, and 2 guys" or some such pipe dream of a ratio.
Needless to say, he finally returned, leading like a pied piper a line of no less than 9 German guys, 1 other French guy, 1 German girl, and 1 Finnish girl. You may notice "Australians" never are mentioned. I'm not sure I've met any yet. Well there was this one Aboriginal... but they probably weren't a citizen either. Ohohohohoho I kid I kid, they totally gave the aboriginals some rights in 1973 (and ceased counting them as "chattel" in the census. For reals.)
They quickly broke out several silvery bags of "goon." What we in college in California called "space wine" -- basically the bag of wine from "box wine" liberated from the box. If you google "goon (drink)" you get this insight as the first result: "What is GOON? Most people in Australia know it, most backpackers drink it almost daily..." "Backpackers" themselves being the ubiquitous swarms of itinerate hostel-dwelling 20-somethings here from all over the world looking for work, hoping to make a fortune before they have to return to some backwater like say "Germany," or "England" (Americans seem to have remained oblivious to the fact that there's a modern-day gold rush on over here).
Cards also soon appeared in the other Frenchman (Zeek)'s hand and drinking games were commenced. They played several that I was entirely unfamiliar with, and then we settled on that great staple of drinking games -- King's Cup. Apparently they play it all around the world!
Everyone seemed generally aware of it anyway, but they seemed to have trouble with some of the rules (like "make a rhyme" .. what's complicated about that? apparently something!). As with the previous drinking games, whenever anyone had drinks to assign, they usually went to Matt, the Frenchman who lives here. I'm not sure if it was due to a German-French rivalry or just because he was the host. He also played exclusively music with French lyrics, which one of the Germans complained about a bit.
Eventually the group decided to trek on down to the clubs in Fortitude Valley (about a 20 min walk from here), so we all headed out (but not before the Frenchman Zeek passed out and was left behind on the Frenchman Matt's bed. Said bed was puked on at the last party and I had high expectations Matt would be 2 for 2 on that)
I had fun at the clubs, which, I'm not a big dancer, but when you're with a fairly big group of fairly drunk people it's easy to have fun. And, as there wasn't a cover, I managed to bleed out no money at all all night!
We slowly lost people until by the time we got back to our apartment around 4:00 it was just me, the Frenchman, and a german guy and girl (whom I think were secretly in love). The Frenchman had high hopes of making some pasta and then everyone going down to the hot tub, but escaped to bed as soon as we were in the door. The Brazilians were going to wake me at 0700 for the beach afterall. Also, it appeared that Zeek had disappointingly neglected to evacuate his stomach onto Matt's bed. ):

I remember waking up intermittently around 7 and anticipating dragging myself out of bed, but Brazilians never showed up. When I finally rousted myself around 11 I found only Luann presently. He informed me "I don't know, our friends told us to wait for them, but next thing I knew Salvatore had departed by himself for the beach, he's crazy!" (see also, the beach is an hour or two from here).
Also, surveying the apartment the Brazilians had so painstakingly cleaned the other day, it was now in the condition you'd expect it to be after a large party -- including a bunch of pots with hours-old pasta solidifying in them.

Escaping the apartment to wander about downtown (as usual it was a beautiful day), I happened upon a place offering "Sunday roast" and a beer for $5. $5!! I had to ask the server to repeat this in several different phrasings before I believed such a good deal could possibly be true. I think I have a new Sunday tradition!! It was quite tasty.

While writing this, the Frenchman (who I must say did a good job of cleaning up the party wreckage) asked to borrow my key. I'd been pleasantly surprised I hadn't been relieved of it yet, but in asking him where HIS key was he said he'd given it to the Brazilians. So I have no idea what kind of weird musical keys we're playing here. Right now I'd like to go down and swim...... but I need a key to do that. I must say this key debacle has been really irritating (and they can't be copied, they're not keys at all but little electronic signal-y things) and somewhat dampened my enthusiasm for living in this apartment. 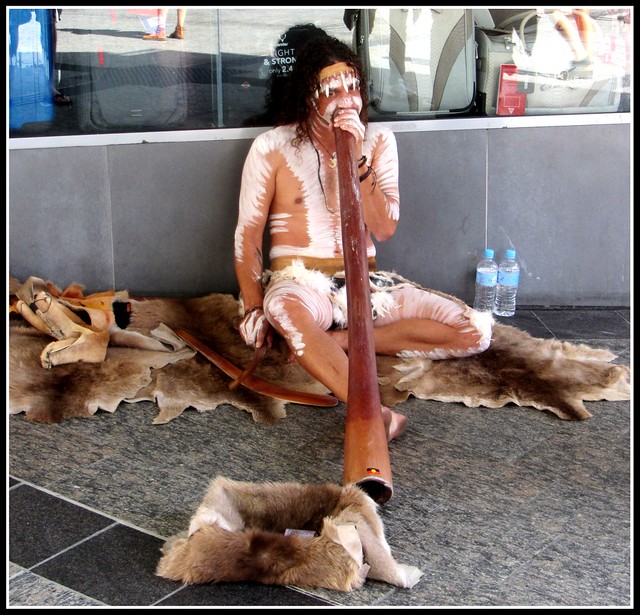