( Previously on the roadtrip: Day 1 )

MONDAY, OCT 1st (map)
It had been dark when we arrived in Young so we were finally able to see it during the day. It once again had that Old West look to it, with a lot of shops along the Main Street, and several former-hotel bars. Town had a mainly agricultural feel to it with a touch of tourism -- it's famous for its cherries and surrounded by many cherry orchards.
Cass and I were both highly amused to find a restaurant on main street called "Juicy Lucy's Rude Food." Unfortunately since we got underway at 0700 not much was open yet (even the bakery!)
Before leaving town we found the "Chinese Garden" which was quite pretty. Apparently a lot of Chinese came over during the Australian gold rush and settled in little pockets. 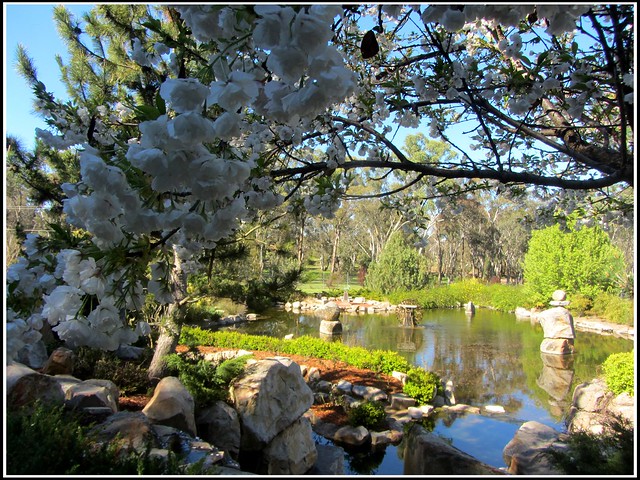 Just the next town over (Cowra) we came across a "Japanese Garden," but admission was like $20 (the Chinese one was free!), and, after looking through the fence we declared it didn't look as nice as the Chinese one anyway. But apparently there had been a Japanese POW camp just next to this location, during WWII. Interesting fact, at the time there were some 2,223 Japanese POWs being held in Australia... and 14,720 Italian POWS from the Africa campaign. During a prison break in Cowra several hundred POWS and several guards had been killed. Many POWS were reportedly killed by their own countrymen, though neither the plaques at the site nor the wikipedia entry explains why.

Just a few little towns later we found ourselves driving past the "historic village" of Carcoar, and once again made a spot decision to pull off the highway investigate. It was indeed a very cute little village that looked like it had somehow been preserved in the 1800s. We had lunch there, where we were shocked to discover the huge delicious grilled chicken sandwiches we'd just ordered only cost a measely $11! What madness! 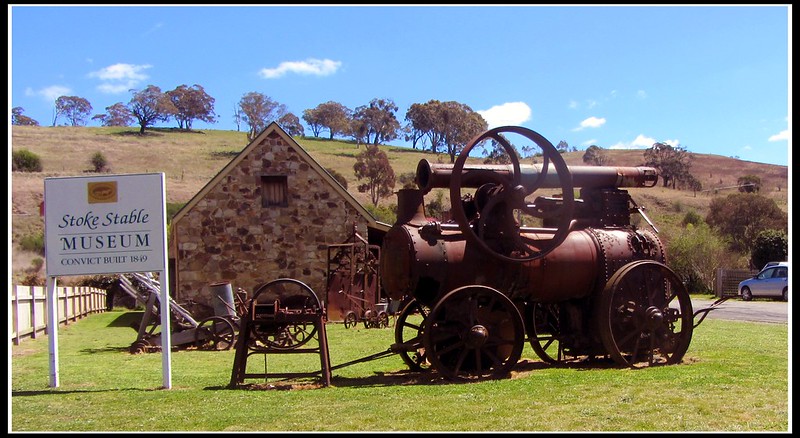 Once again it was only a short distance further until the next noteworthy location -- almost by accident we suddenly found ourselves driving on the famous Bathurst Racetrack. Apparently that's a thing. That's famous.

After Butthurst our route merged with a major highway headed from the interior to Sydney (which was now only two hours away or so, though we very specifically planned our route to avoid the city). The highway here was broad and fast and boring. For the first time on this exciting roadtrip I found myself nodding off.

Shortly though we began to rise up into the Blue Mountains, and the rolling hills and cows that had thus far marked pretty much the entire trip gave way to steep forested hills and mountains. And you know what? Apparently route forty has NO EFFING SCENIC TURNOUTS to pull over and actually look at things.
So we took a detour that took us several ks off the highway to a place with some pretty sweet views.
Continuing on our way, once we were no longer in the national park there were a lot of apple orchards and cute little shops selling apple pies. We stopped at one such place and I had a slice of apple pie on the balcony overlooking some blossoming cherry trees, a pond, and rolling hills: 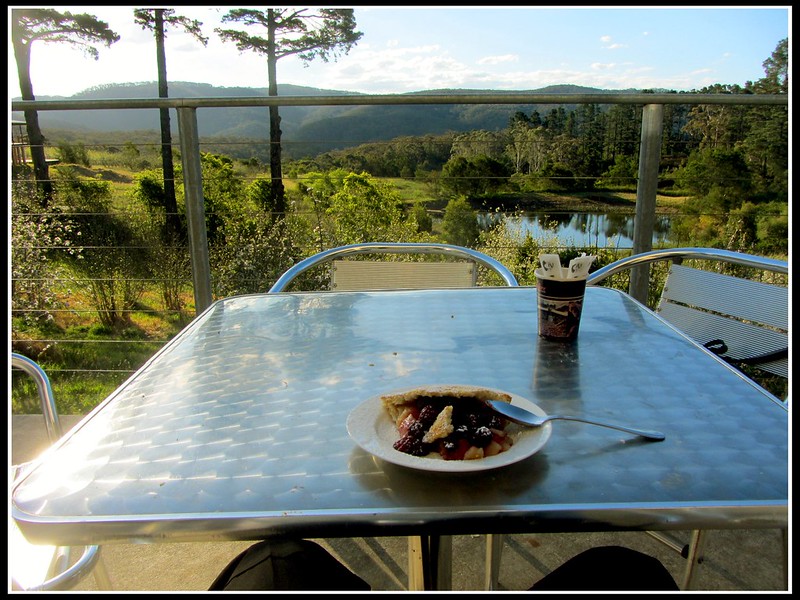 Just about when the highway popped out of the mountains and headed into Sydney, we turned left and gratuitously went way back into the mountains. The idea behind this was to stay on the scenic routes and avoid the boring cityscapes ..... but the sun soon set and the rest of the journey was in the dark. I'm sure the drive back through the national park would have been lovely though. Once through to the other side we saw the shadows of enormous mining trucks lumbering around near us like giant shadow beasts. Then we had dinner at the hotel restaurant of some small town, and it seemed to be the only place in town because even though it sure didn't seem hip, all the young people in town seemed to be loitering there. I had some delicious lamb shanks there. Then it was another hour or so on big highways to Newcastle, on the coast, where we found a hotel for the night.