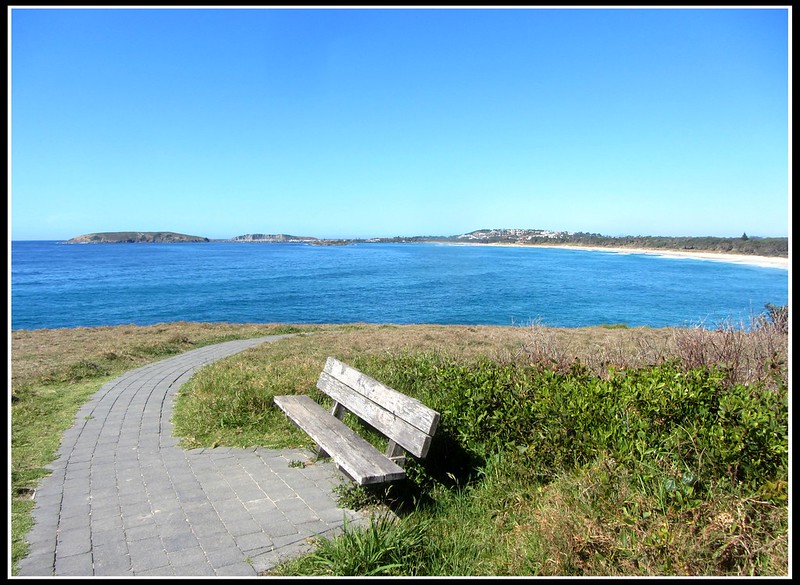 So waking up in Coff's Harbour, first we went to investigate the nearby beaches. They were all quite beautiful, and there was a lovely footpath along the bluffs, as pictured above. Also, I was surprised by how uncrowded these beautiful beaches were. I mean, this ain't a million miles from nowhere, this is pretty much in the city of Coff's Harbour, on a beautiful day. Guess there's just so many gorgeous beaches that people get spread out.
Or maybe no one was at the beaches because they were all at Coff's premier tourist destination... 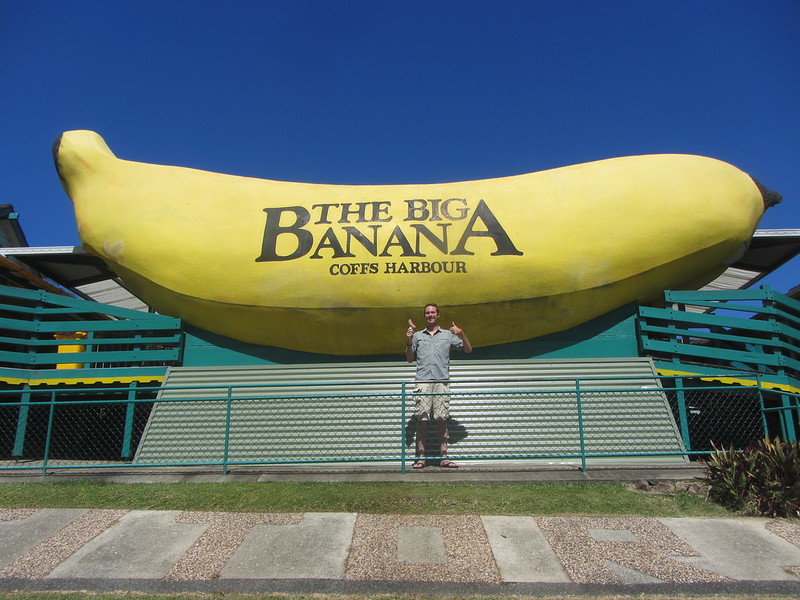 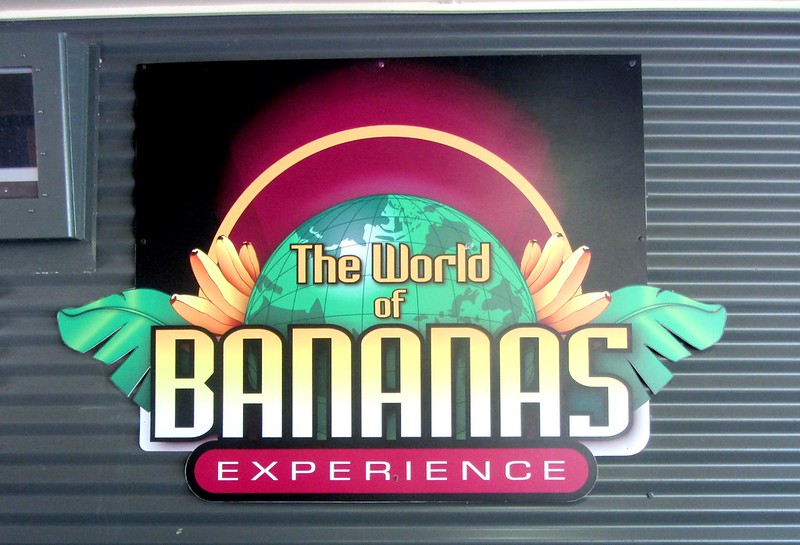 That's right, it's the BANANA EXPERIENCE. In case you were wondering just what this BANANA EXPERIENCE is, there's an informational sign advising that its an "edu-tainment attraction for all ages!" "...enjoy a whole new theatre experience with state-of-the-art projections" "...experience ... a holographic-like presentation of the use and value of bananas" and "interactive and fun displays" (all bolding SIC). Who knew bananas could be so exciting???? 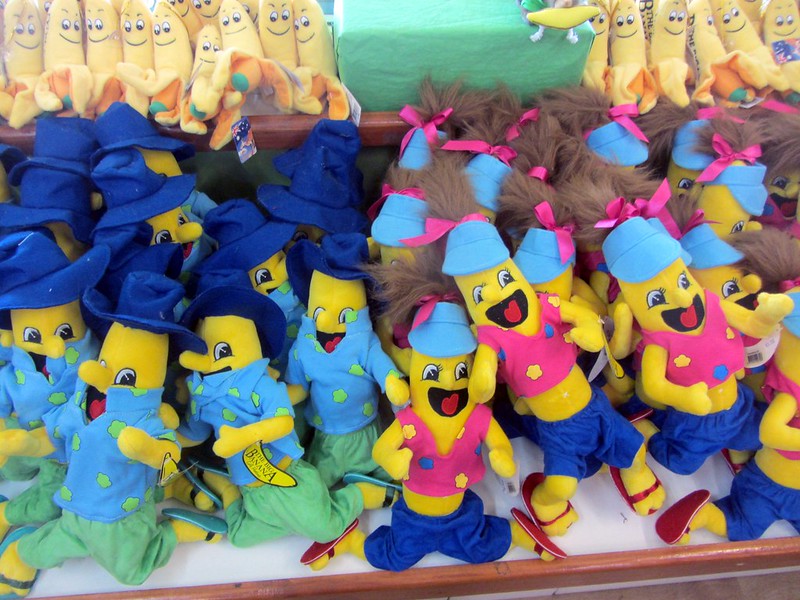 Also, do you sometimes find that when you go to whip it out and feed someone your banana, it is no longer good and rigid? Don't worry it "happens to everyone," but now with your very own "banana keeper" individual banana carrying case (only $7.95!), you can be sure to arrive with your banana intact and ready for action anywhere! --What? We're talking about fruit here people! 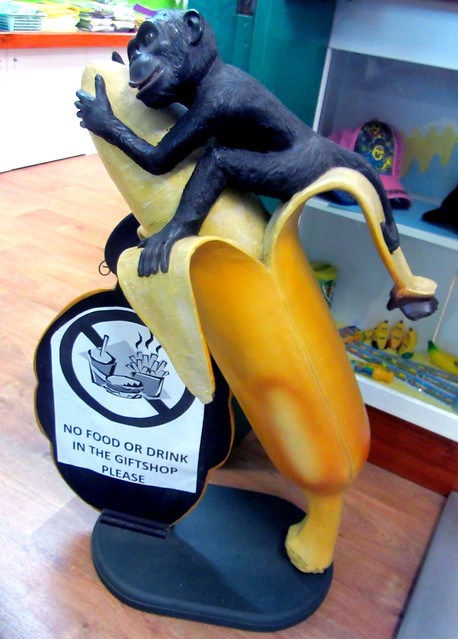 And this monkey-on-a-banana totally doesn't look sexual at all. O_o

Okay enough about the giant banana silliness. Its time we continued on our way and left giant silly objects behind yeah?
So the next several hours we had nothing better to do than drive along the highway. Things had gotten noticeably more tropical since Newcastle and here we sometimes found ourselves driving through sugarcane fields and past sugarcane mills. There were a few little towns but I remember we were looking for a place to have breakfast/lunch and kept failing to find a place that really interested us.
We turned off at signs for MacLean "the Scottish Town!" but found it rather dull and continued on our way. They did have a different tartan pattern wrapped around the base of every power pole though.

Eventually we were able to get back to the coast in the town of Ballina and, wait, what's this?? 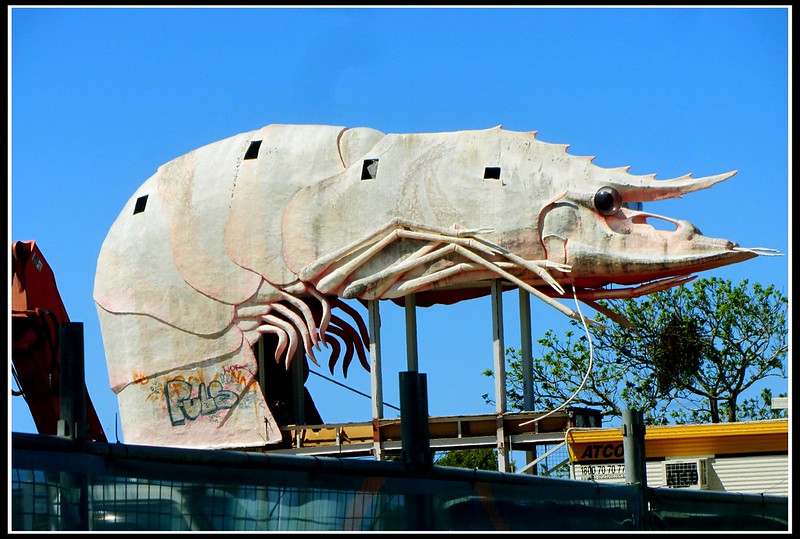 It's a GIANT PRAWN!! Are you ready for the giant prawn experience???

Well, unfortunately the Giant Prawn Experience appears to have been demolished. But I'm informed there was specifically a community outcry preventing the demolishment of the Giant Prawn itself, so now it looms like cthulhu over a whole lot of nothing.
And then, we were at Cape Byron:

Yep, that's another classic awful photo-mesh or whatever you even call that. But its looking back from the cape towards the mainland. Note you can see water on both sides.
Cape Byron is the most Easterly point on mainland Australia. Also it's incredibly beautiful. And there's a pretty lighthouse (note the wallaby cameo in that picture). From the top of the cliffs we could also see dolphins swimming about in the ocean down below.

Driving down from there to the main beaches we found them also very nice, though extremely popular. Cass talked me into trying some "sugarcane juice" and it was indeed pretty good, very sweet. I immediately started thinking it should be used to make mixed drinks. Lots of trendy little shops and things down there though, it was definitely touristy.

From there we were essentially in Brisbane's backyard anyway and the sun shortly set, so we just cruised on up to Brisvegas. The End!

Next: I go into exile on a farm in nowheresville for awhile!


( all pictures from this day ) --I highly recommend you take a look today, there were a lot of nice pictures I didn't have room for in the entry.