Stirring up the Crochets Nest

So this old guy Greg I work with. I've given basic descriptions of him several times so I'll spare you more than "old crochety set-in-his-ways beekeeper."

At the end of the day Friday he said nothing about what we were going to do on Monday, so I assumed he'd get in touch with me if he wanted to meet me somewhere. Anyway, and again, he's not my boss, so I'm not going to hunt down his validation before I start my day if I haven't heard otherwise.
And talking to Trevor (the farm owner) on Saturday, we agreed that Greg was pulling too many half-full frames of honey off and really we ought to be supering (adding additional boxes onto) the hives rather than trying to extract half full frames. Trevor said when he talked to Greg he'd tell him not to come in this week since we're not doing the extracting.

And so I went about my day on Monday without any word from Greg and that was fine by me.
BUT. It turns out he was there. He... GET THIS ... assumed I'd assume we were going to meet at Bucca to continue extracting there and so he went there and waited there FOR THREE HOURS, and then, AND THEN my dear reader, he proceeded to the honey extracting shed and WAITED THERE FOR THREE MORE HOURS. Keep in mind the extracting shed is a five minute drive from the home farm, where he could have been guaranteed of finding someone who knew where I was (that and I think if you rub a lamp or something Trevor will appear).
IS your mind blown as much as mine was when I heard how he spent his day? Trevor called me this morning at 6:20 and briefly related it. Apparently his reaction when Greg told him was "There's no way you're that stupid???"

But anyway, the call at 6:20 was to inform me that Greg was expecting to meet me at Bucca at 0700 to super or extract.. or something. Trevor basically left it up to my discretion. Which because Greg is an overbearing ass and I don't have the heart to boss around a guy who's like three times my age (okay maybe not quite), means that its still probably going to be whatever Greg thinks we should do.
And keep in mind Bucca is like 30 ks away on small country roads and I still had to load up the truck. So I got to Bucca at 0800 and, as expected, Greg was PISSY.
So my day was filled with fun interactions like:
Greg: do you know where the queen in that hive is?
Me: No, that's why I'm going through it (the hive was missing the "queen excluder which would ordinarily keep her in the bottom box)
Greg: She's going to be in the top box, always the top box (which I had placed on the ground while going through the bottom box)
Me: I've found 3 out of 3 queens in a row in bottom boxes
Greg: She might end up on the ground too you know
Me: Then I'll see her on the ground
Greg: She'll have a circular cluster of bees around her
Me: Yes. I know.
Greg: Well you just said you didn't know. Do you know or don't you???
Me: What did I say I didn't know?
Greg: Where the queen is.
Me: I don't know which BOX she's in.
(She turned out to indeed be in the bottom box. I don't know where he's getting this "always the top box" thing)

Or my favourite interaction of the day:
[I begin to open a hive on the trailer we did half of on Friday]
Greg: "Are you on drugs?? We already did that hive on Friday!"
Me: "I don't remember which end we started on"
Greg: "Well isn't it written in your little book" (Trevor has gotten on Greg's case about not taking any notes, now there's a notepad of notes, to which he's disparagingly referring)
Me: "You were holding the notebook all day, it doesn't say anything about what was done." (PWN)

And anyway, there were lots more unnecessary pissy and caustic comments from ole Greg all day. Anything I did which wasn't exactly how he thinks it should be done was stupid and crazy, apparently. Meanwhile, might I note, that somehow, despite being a beekeeper for "50 years" he doesn't know to load an extractor (centrifuge) with the tops of frames facing outward (thus pulling the honey "up" and out -- he insists on loading them the opposite way, resulting in longer extraction times and more exploded frames), nor some other things which to me seem fairly basic.

Fortunately Trevor knows enough about bees to already be aware of the incorrectness of Gregs opinions on extractor loading and other things. And I guess when he talked to Trevor after the day I "didn't show up" he tried to claim I didn't entirely know what _I_ was doing, to which Trevor apparently responded "I don't know Greg I think he's doing everything exactly the way it ought to be done" or something similarly entirely positive.
And I feel less bad about not having the chutzpah to put Greg in his place because Trevor basically said that he himself had been unable to completely corral Greg and tell him to just absent himself for a week.
And here's the real unfortunate part. I mentioned that, you know, at this point I'd rather just not work with Greg, he gets in the way with his incorrect ways of doing things and on days like this is quite unpleasant to work with. To which Trevor ruefully admitted that here's the thing -- Greg is the trustee of the estate the Bucca farms belong to, and we've already invested a lot of money into the farms there under the assumption we'll buy it when that becomes possible ... so we can't just completely blow Greg off and/or fire him


Also I found out that there was another relatively recent former beekeeper -- "the kiwi," whom I've only ever heard the vaguest references to thus far -- who apparently only lasted two days or so. He's the one who almost caused me not to take this job because he had reported into the bee grapevine that Trevor was "an asshole," and I heard that through the pipeline when I was still looking for a job (and thus ended up working for that real asshole WHO STILL HASN'T PAID ME...) . So I'm very curious to hear Trevor's side of THAT story. 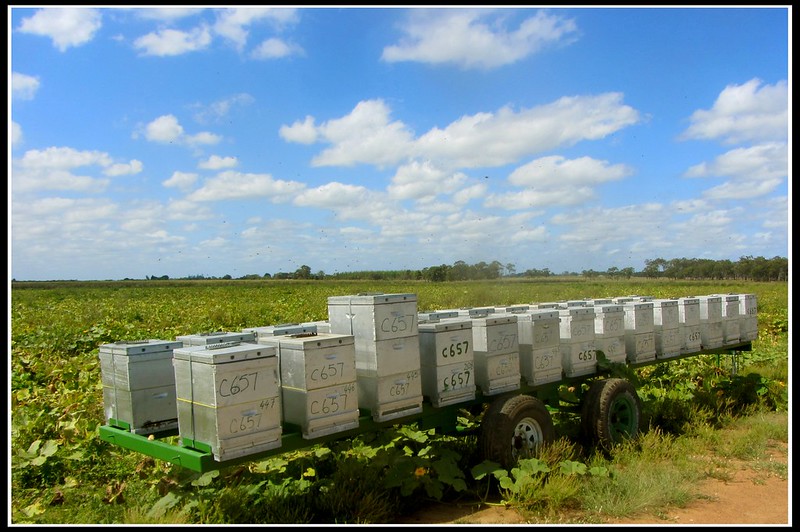