The Queen Is Dead, Long Live the Queen!

So this guy Greg I work with... I don't really mind that he's crotchety and sometimes speaks to me quite rudely and disrespectfully, I don't even mind terribly that he thinks he's my boss when he's not --I have a pretty thick skin-- but what is driving me absolutely insane is that he has many extremely erroneous ideas about proper beekeeping that he absolutely insists we adhere to (because he knows better because he's been beekeeping for "fifty years".

So the other day he was merrily packing away half full frames of honey and I was kind of feeling irresponsible for not standing up to him -- after all Trevor has been quite clear that I have his permission to insist things be done right. So that day when we got to the extracting shed I tried to put my foot down on both the scratcher and extractor issues ... and on the scratcher issue it came down to him saying "just do it as I say, alright?" and me saying "well. No. Trevor has given me clear instructions to do as I see fit." To which he responded "Well I'm going to have to talk to Trevor then" (in a "I'm going to have you fired" kind of way. And on that subject I've talked to Trevor about having Greg fired but we can't because he's the trustee of some land Trevor wants to buy so we can't completely blow him off) ... and then he didn't let go of the scratcher for a long time.
Now, who should walk in a few hours later but Trevor himself. And what should Trevor happen to say to me, as I'm painstakingly misusing the scratcher in the manner Greg thinks it should? Trevor says "Kris why don't you use the scratcher the right way??" to which I responded with a grin "I'd love to Trevor!" and what happens next but Greg about flies across the room and bellows at me "NO! I TOLD you not to do that! If I see you doing that again I'll have you replaced with a Vietnamese person who by the way would be much faster at that then you!" And there followed another argument in which Trevor and I together tried to get Greg to relent but he wouldn't. At least I feel a lot less bad about not being able to turn him around when I see that even Trevor can't. Trevor then engaged Greg in a more thorough debate about the nature of centrifical force, this time there WERE physical demonstrations (and Trevor saying "now Greg, I called up the manufacturer of this bloody thing, and HE said the tops go outward!). Greg was very obstinant even in the face of mounting demonstrative evidence but I was shocked to find he actually DID give in and start loading the extractor the correct way

To save us all from more unnecessary extracting, Trevor has instructed me to inform Greg no new drum to put the honey in is coming tomorrow, though really it probably is. I was hoping Greg would disappear without extracting to do (which he seems to strangely love.) but looks like Greg is rip roaring to help me install new queen bees tomorrow (or as he'd probably think of it, have me help him install new queens).

This afternoon Trevor called me to say the queens were in and I should pick them up (and that there was no honey drum), and Trevor and I agreed I'd proceed to the "Moorepark" farm to install them. I relay this to Greg, who's there with me at the extracting shed hoping for a honey drum, and Greg vetoes Moorepark and says we'll go to "606" (another property in the opposite direction) to install the queens. I forget what his reasoning was but as usual he was entirely unimpressed that his boss had just told us to go somewhere else.
So I get the queens and catch up to Greg, who has already killed three queens to replace them and is working on a fourth. He thrusts a frame at me with a queen on it and instructs me to kill her so we can replace her. Now I'm really not entirely confident that replacing these queens will help anything, but there was nothing for it short of calling into question (or making it apparent that I call into question) the entirely of Greg's "beekeeping" skills, so I crushed her between my fingers and tossed her into the shrubs.
"WHAT DID YOU DO THAT FOR?? ARE YOU AN IDIOT???"
"Uh, I killed the queen and tossed her away from the hive... what part of that do you object to"
"NO!! You put her back in the hive so the bees know she's dead and accept the new one"
"...uh, what. Greg, there's no 'dead queen bee pheromone,' a dead queen bee smells like any other bee and they still smell HER so they don't think she'd dead. It's not like bees see her dead and go tell eachother"
"Well how do you explain swarming with your queen smell theory?" -Greg
"uh, what??" I was seriously at a loss as to how to respond to that because it's not really related.
But seriously, I don't know whether to laugh or to cry. They... see and/or smell the dead queen and therefore look for a new queen? That's ass backwards.


So here's the question of the moment. Tomorrow I'll apparently be hanging out with Greg again and this requeening situation is likely come up again. I am strongly inclined to once again make a stand and come hell or high water refuse to place any dead queen bees back in any hives. As a professional beekeeper I know with certainly that it is contrary to all accepted industry practices and will lead to the bees thinking they still have their old queen and thus not accepting the new queen.
I anticipate Greg having an absolute kiniption if I refuse to do it his way, which may not be solved until one of us actually walks off the field, but on this matter Greg is very very wrong, and our boss has on a number of occasions made it clear he wants me to steer us in the direction of industry best management practices and call Greg on his bullshit -- though causing ole Greg to have a meltdown seems also not entirely desireable.


And here's an unrelated picture of an upside-down jellyfish, which would probably be a more pleasant work companion. 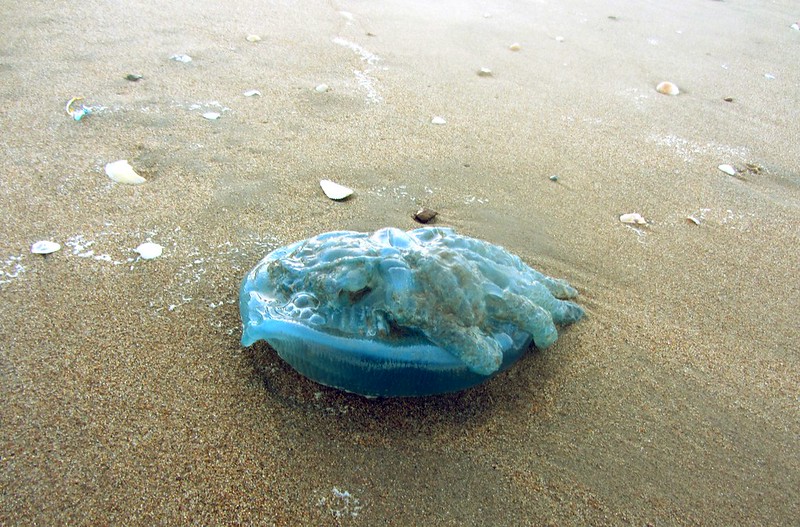