The Final Shenanigans of 2012 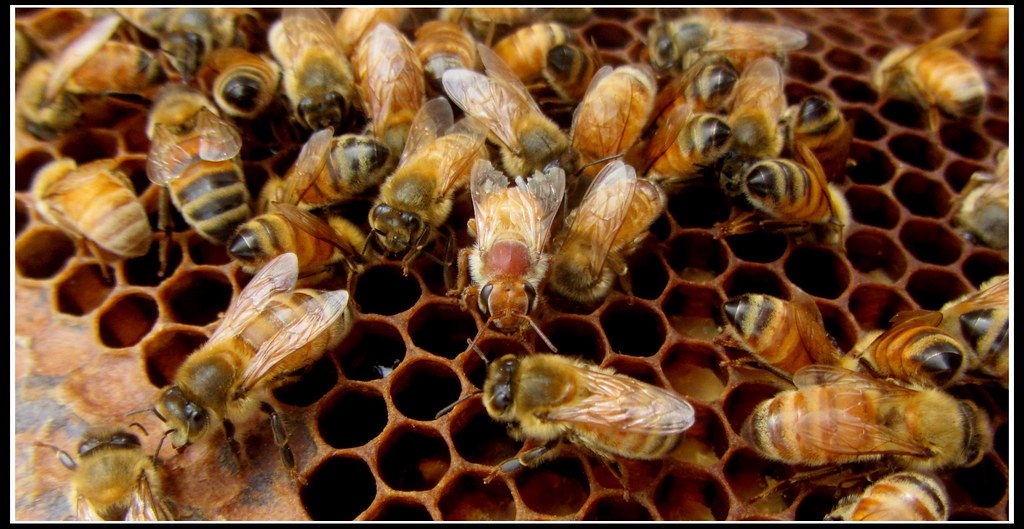 Pictured above, the Bee Pope, wearing his red skullcap bestows a blessing upon one of his subjects.

The final two days of 2012 were full of some very strange happenings out in the bee yard.

First I was going through a hive on the 30th and noted to my self "yep there's the queen," next frame "yep there's the queen ... WAIT [cue that noise of a record going backwards or suddenly stopping or whatever causes that noise] --" there were two queens in the hive. I looked back at the notes, the hive appears to have been requeened two weeks ago. It would appear the two queens had coexisted in one small (just one box, ten frames) hive for about two weeks, weird!

Then on the 31st I ran into a number of weird situations in a row. First, as soon as I pulled up to the trailer of hives I was going to work on that day I get out of the truck and right there on the ground is a queen going for a stroll.
People sometimes tell me "oh I saw a queen bee the other day" and there's not a doubt in my mind they're wrong -- they saw a drone or a bumblebee, but you simply don't see queen bees outside a hive. They only leave a few times in their life, shortly after reaching adulthood, to go on mating flights. It had just been raining so it's my assumption she was out on a mating flight and got caught in the rain.
I felt she deserved a name, and having used up all the obvious princess and queen puns on my artificial insemination queens (Queen Beeopatra, for ex), I randomly decided on Queen Vindaloo. And whichever hive I put her into would become named Vindolanda!
So I set about looking for a hive that appeared to be queenless and have a recently hatched queen cell.

Found a hive with numerous queen cells, some still occupied and some already hatched out. Thought I had found Vindolanda, but then I saw a queen in the process of getting "balled" -- workers will ball up around a queen they are trying to kill, which they'll do if they think they already have a queen and an unfamiliar queen shows up.
Honestly this is ALSO something you rarely catch them in the very act of doing. I've seen it once before and asked the beekeeper I was working for what I should do about it and he said nothing -- they often try to ball a new queen but then decide she's alright and the ballers accept her before they've killed her. I'm not 100% on that beekeepers wisdom (that was the queen breeder on the farm south of Brisbane), but its my only information on that. So I let the baller bees keep on doing their thing but decided I wouldn't introduce Vindaloo into that anarchy. 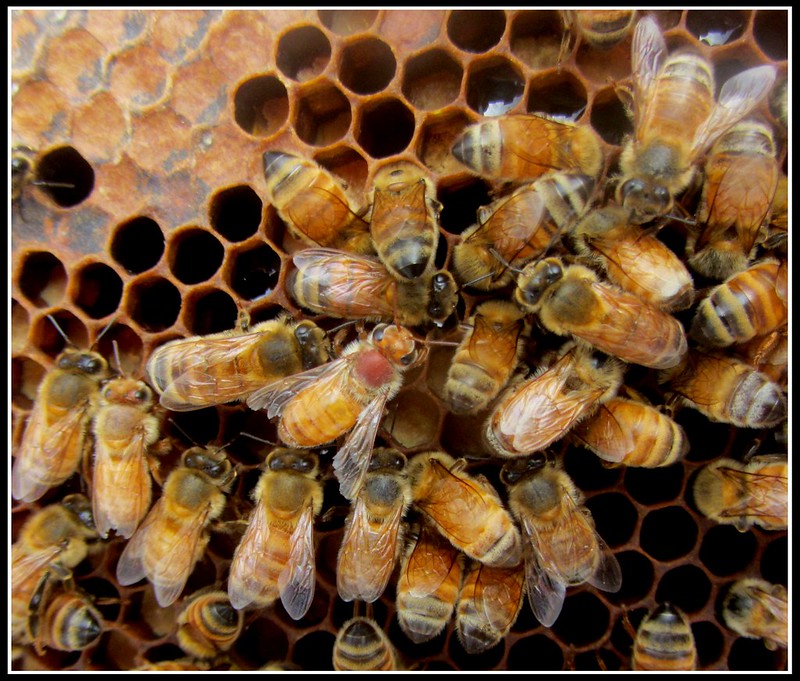 And in the very NEXT hive I encountered the pictured red-backed bee. By now, having encountered so many extremely rare situations in close succession I was getting a little bit freaked out.
Also the weather was being rather unusual. Usually we only get passing rain squalls -- clouds dropping rain that you can see coming and if they pass overhead you get rain for 10-15 min and then the sun is out again, and even during you can see the sun elsewhere around you, but this day there was complete cloud cover and the whole sky would randomly drop rain for 10-15 min every 30-60 minutes.
But anyway, so I thought this red backed bee was extremely odd. I got her into my hand and took a closer look and she definitely didn't have something red sticking to her -- her skin was red. What I somehow failed to notice until I looked at the photos is look, her head is totally different!! Hey eyes are way more off to the side and don't have the hairs on them that bees do. Altogether her head looks more like the head of a wasp.

So now I'm REALLY perplexed about what that is because I know of no wasps that look that much like bees. I sent an email with links to the pictures to my friend Dr Thorp at Davis, but he specializes in CALIFORNIA native bees so he might not be the best person to sort it out but I'm sure he'll know something.

And then I went to get in my truck and drive away ... and the battery was dead.