Went from Everett down to Seattle (like an hour south). Had thus far not actually poked around downtown Seattle. Visited a famous coffee shop there (Victoriola or something?), Janelle and I met up with her mum (again). Then we picked up two riders (two quiet grad students, a couple, not much to say about them) and failed to find this rider Garlen (I guess he had just gone across the street from his hostel, so we left without him) and proceeded down to Portland.
In Portland we got rid of the two riders and then proceeded to the Kennedy School Pub, which is an elementry school which has been converted into a movie theatre, hostel, restaurant and pub. Very interesting. Nice little pub. There Janelle and I met up with

xaositecte (friend of mine from Model UN, also participated in 30 in 30, and had just gotten out of the Air Force and back from Germany the day before),

meowmeowpants (Mindy, 30 in 30 participant, one of my favourite people), the-guy-Mindy-is-currently-dating and Janelle's friend Brian (whose awesome place we crashed at on the way up). So we had a fun little time there. And then I guess

xaositecte commandeered the camera so there's several pictures of Janelle and I from the pub. That night we once again crashed at Brian's place. 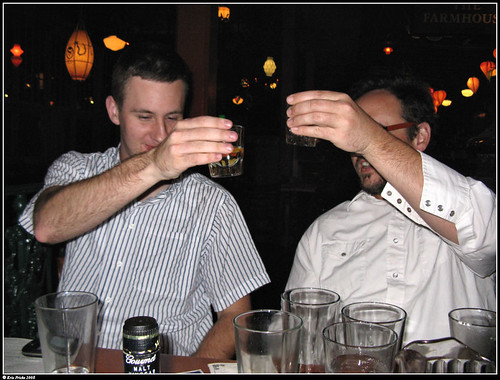