A picture of mine on flickr, of the Redding Sundial bridge: 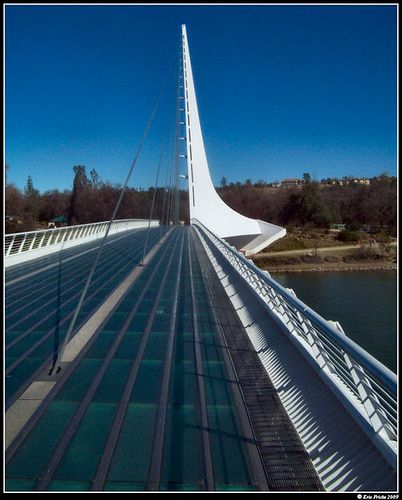 
Now, an overexposed and all around mediocre picture of that same bridge by someone else on flickr:


Just goes to show the power of totally whoring out your pictures by posting them to 6 groups, and giving it 71 tags. Including such tags as "garden" "engineer" and a whole bunch of strange things like "interestingness=3" and "top-v444". Is this some voodoo that fools search engines into thinking it's more interesting than it actually is?

Though I guess now I'm gonna go put my own bridge pictures up on the bridge group. Maybe I can get a third view out of it.


Photo Idol!!
Now speaking of competing photos, (and totally whoring oneself out) I was thinking the other day about a "LJ Idol" style LJ Photo contest. With all due credit to LJ Idol and the illustrious LJ Idol administrator Gary of course.
But yeah, I'm taking a photo class at the local JC right now, and we have weekly assignments (this week I have to come up with some portraits /: ) and I was thinking, it's like LJ Idol but with photos! ...and not getting voted out.
Anyway, it seems to me highly likely that there already is such a contest on LJ. Anyone know anything about this?


30 in 30 VI!
And speaking of shenanigans, June is quickly approaching, which is traditionally the time for 30 posts in 30 days. The ultimate event of the blogosphere. No one get's voted out, but about 2/3rds of people who make the attempt just can't hack it. So who's up to join the brave and valiant 30 in 30 elite? (: