Security on the Israeli side of the border crossing at Taba/Eilat consisted of three seperate places where they checked our paperwork and passports and crossreferenced them on the computer (and Aaron almost got taken into custody*); Security on the Egyptian side consisted of a man in a chair.

So we ended up going with the taxi driver anyway. He wanted 100 egyptian pounds a person to take us to Sharm El Sheikh several hours away. Right after we agreed (having utterly failed to budge him in our attempts to haggle) another driver offered us half the rate -- but we'd already loaded our stuff in the first guy's taxi so we stuck with it.

As we were leaving we passed the bus coming in.


*Aaron was flagged as an draft dodger. They were all excited about catching him until he showed his US Coast Guard ID and explained that he had had to give up is Israeli citizenship to join the US armed forces.

Last night* we pull into a little outpost in the middle of the darkness of the Sinai. There are three shelters in the pool of light -- two are wooden frames with dried palm fronds for a roof, one is made of brick but is largely open on the front and also has palm fronds for a roof. Three goats sit on a picnic table in front of the latter. A loud techno beat blasting into the night completes the completely surreal picture.

In one of the the shelters two local men drink tea wearing the typical bedouin garb of what we've called a man-dress for lack of a better term and head covering. In the other open one two men are playing a soccer game on a tv screen. One of them has the white uniform of the Egyptian police/military, with three gold stars on the shoulder (unless they have generals stationed at every little checkpoint this does NOT mean what it means on a western uniform). The brick structure is a poorly stocked little shop. The sound and smell of the diesel generator from which the little outposts electricity no doubt comes from dominates the inside of the shop.

The sign outside the shop identifies it as the Buddha Cafe. A sign inside proclaims that "Allah is great!" 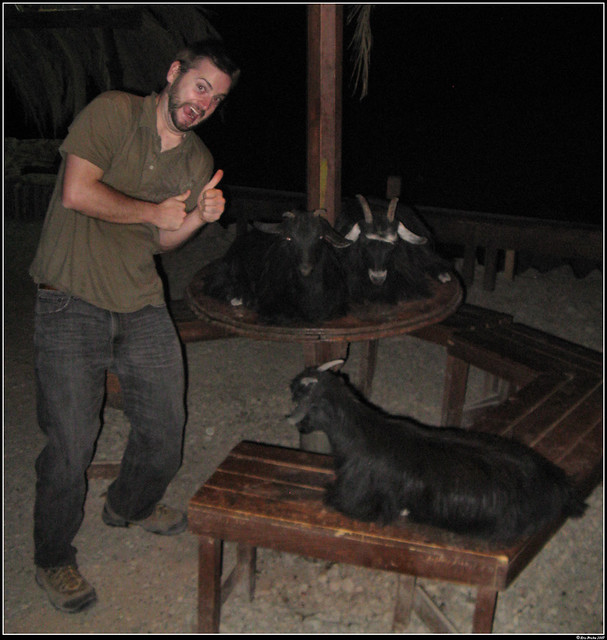 After a 15 minute stopover at this location so our driver and tour guide can smoke their 150th cigarettes of the day, we continue. We're driving through the night in a little van. Our driver, tour guide, security guard and about 11 tourists somehow cramed in.

Its a few hours to Mt Sinai, and we pass through a security checkpoint at least once an hour, as we did when we initially came in to Egypt. The security checkpoints consist of barriers in the road that make you have to drive zigzag, as well as speedbumps. Finally there will be a crossbar and a little hut. At the hut will be the white-clad police-military (though sometimes they're not wearing a uniform at all). Often they don't have a weapon at all but sometimes they'll randomly have an AK-47, and once one had a sword. They seem to actually harass locals a lot more than tourists, I guess they realize they need our money.

In contrast to the police/military, private security such as the guy in our van typically wear suits and carry an MP-5 or similar small submachinegun under their coat.


So we drive through the night. We left our little resort around 10pm. I had always pictured the Sinai as a large flat desert. Desolate it certainly is, but flat it is not. At least the southern portion consists entirely of endless rugged mountains, completely devoid of anything green, or of dead plant life, or of soil, or anything other than rock and gravel. Its really a wonder anyone can live here.

The road winds through these crags, at some point dynomited right through them (the grave of the engineer who did this was pointed out to us as we passed. Turns out he dynomited himself too).


We arrive at the base of Mt Sinai around 2:30 in the morning. I wasn't sure what to expect but I'm greeted by throngs of tourists, dozens of idling busses, shops and camels. Figures.

Everyone climbs Sinai at night because it's simply too hot to do during the day.

Before we start the trail we must go through a metal detector, like most public places in Egypt. In this case the power was off on the metal detector and the guards weren't interested in looking at bags.

We start up the very-well-worn trail up the mountain. Ahead of us we can see the twinkling line of flashlights snaking all the way up the mountain. The temperature is nice. I prefer not to use a flashlight because your eyes eventually adjust pretty good and then its nicer than having your vision limited to the circle of your flashlight.

We trudge along up the hill. Eventually the crowd thins out enough and other people realize they don't need a flashlight so I'm able to actually proceed through the dim natural light.

Out of the darkness the red dot of the end of a cigarette will emerge every 100 yards or so, to be accompanied by "camel? camel? camel!" ("a very informative people" Aaron notes). I'm sure they understand "no" but we've found saying "la!" (Arabic for no) is infinitely more effective. It shuts them right down like magic whereas "no" seems to be an invitation to try harder.

Throughout the journey camels suddenly lurch out of the darkness or appear silhuetted against the stars. The first few kilometers are relatively flat, then it escalates to about a 30 degree grade for a few kilometers, and then the final kilometer or so is at least a 45 degree grade of steep steps. Grueling to say the least.
I've been to the top of Mt Whitney, the highest mountain in the continental united states, and I'd do that again -- I would NOT do Mt Sinai again. It's worth doing once I'd say, and the view of the sunrise from the top is nice, but oh my god my kneeeees.

We arrived at the top around 5:45, just in time for the sunrise. Aaron pulled out some pringles potatoe chips he'd had in his pack and, let me tell you, they've NEVER tasted so good. The sunrise was rather lovely and we all took many pictures (I'd post one here but the camera transfer cable got left in Tel Aviv) (pics added in 2011!) 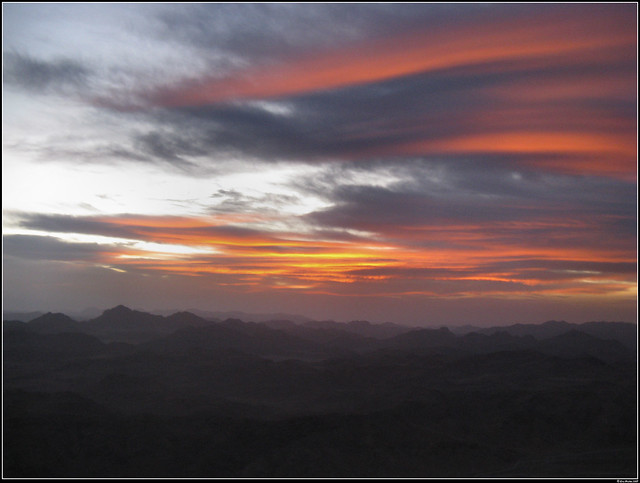 Then one of us says "now it's time to go back down!" and Aaron adds "and up agani too, since there were downs on the way up!" and I add "uphill, both ways!!" 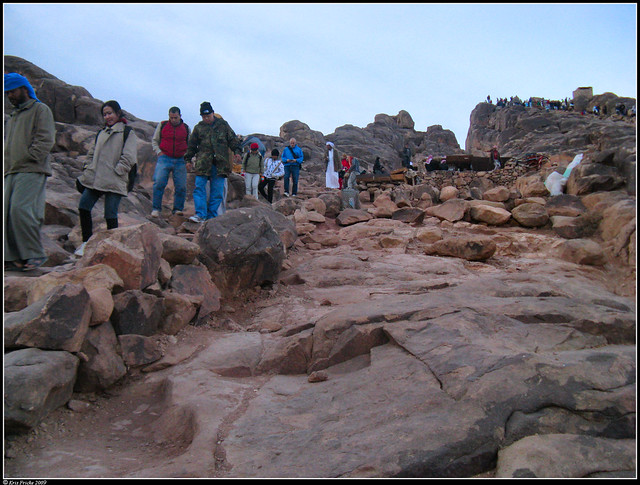 * actually it was two nights ago as of the moment, but I composed this the next day .. I just didn't have internet access for two days due to, you know, wandering the Sinai.

[Posted from a little internet cafe by the beach in Sharm el Sheikh, Egypt (Sinai). Please excuse any typos etc, I don't have time to proofread this - hammering it out in half an hour between the cafe opening and my bus leaving]
Collapse