Well it's 01:30 am Tuesday night / Wednesday morning. LJ Idol topic this week is Rolling Stop and it's due tomorrow afternoon. We have revielle at 0700 though and will certainly be busy through the deadline, so it's now of never.

Haven't found wi-fi in this port (Friday Harbour, San Juan Island), so I'm left to use the ship's computer. And to do this I have to wait until there's not a ruckus going on here in the aft cabin where the computer lives. Finally now I'm alone in here, alone with two boxes of beer bottles (a mostly full box of "Henry Weinhard's Private Reserve" (a lager) and mostly empty box of "Alaskan Amber" ("an alt style beer." I know what Amber is but "alt" is a mystery to me. There are also several glasses that formerly held whiskey (and some that still do, the shame!) still sitting on the table -- the remnants of a good night.

Watched the movie "Inglourious Basterds" with some shipmates until around 12:30, was then in here talking with Pony until drunken sounds outside on the dock alerted us to the totally drunk return of several shipmates who had just returned from the bar. Went out and talked to their ridiculously blitzed asses for a bit and now I'm here. And I still have an LJI entry to write! I have an idea but it requires research .. which I don't exactly have time to do. So... unless I come up with a brilliant idea in the next few minutes it's going to be late night not entirely sober unresearched shenanigans!
Either way though, I still think it's better to get voted out in any conditions then fail to post.

Anyway, onward to writing about the fall of the Byzantine Empire from memory!


Unrelated Picture of the Other Boat of the Day 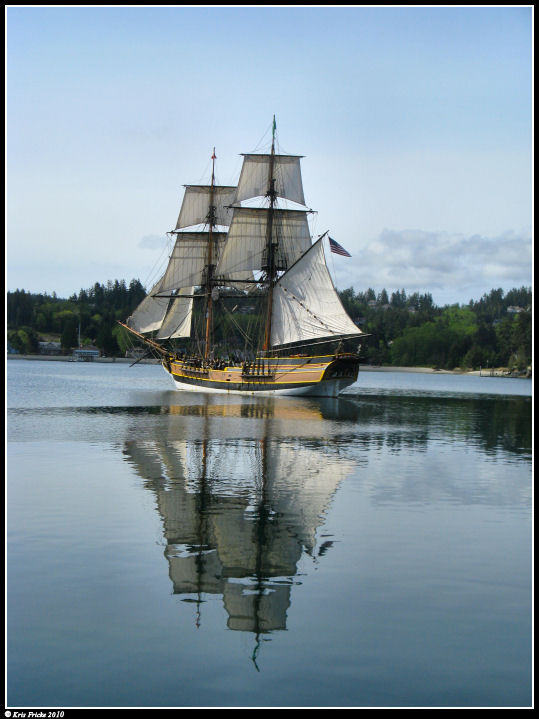 By 1453 Constantinople, the capital of the Byzantine Empire was a mere shadow of the gloriousness it had once been. It was still surrounded by several rings of some of the largest and sturdiest walls ever built by man, but that was precisely because these walls had been built centuries earlier with strength enough to stand the test of time. There were still large palaces but some of them had holes in their once-golden roofs -- not from battle but because the empire could no longer afford their upkeep. Owls hooted in some formerly magnificent palaces. Even the city itself had shrank. Where once the entire area within the walls had been packed and bustling with people from all over the empire, now there was actually farmland in places within the walls and distinct villages.
Still the Empire soldiered on though. An empire that traced its history in a direct and continuous path back to when it was the eastern half of the Roman Empire. The glory of Rome itself stretches back to earlier than 753 BC, which means that by 1453 Byzantium could trace a continuous government stretching back over 2000 years, and over 1500 years as an empire.

In 1453, however, the empire was in a sad state. In fact, most of it had already fallen to the Ottoman Turks under Sultan Mehmed II, and by April 1453 the Sultan had Constantinople surrounded with 80,000 to 200,000 troops. Defending the city was an army of merely 7,000, of whom 2,000 were foreign allies. The foreigners had beens sent by allies in Europe (most significantly Genoa and Venice) who were concerned about the great city falling into Muslim hands ... only concerned enough, however, to send what's really a tiny pittance of a force.

Shortly after midnight on the 29th of May, 1453, after a month of siege, the Turks began their final assault on the city walls. Despite the overwhelming odds, the defenders though spread very sparsely along the walls were able to hold out all night and into the day. Eventually they broke through one of the gates and overwhelmed the wall in several places.

Byzantine Emperor Constantine XI had been given the option before the siege began of leaving the city and ruling one of the tiny remainders of the Empire but he refused. Now as he saw Ottoman flags flying over the towers and streaming across the inside fields it is said by several sources that he discarded his imperial regalia, grabbed his sword, and ran into the melee personally. He was never seen again.

So ended the Eastern Roman Empire.

But of course the title of "Byzantine Emperor" was claimed by various relatives of Constantine for another fifty years or so, and the title of "Holy Roman Emperor" went on being used until 1806, though there was no real Holy Roman Empire to speak of during this time.
And if you think it ends there, Romania is still called Romania as a legacy of the time it was "Romania" in the sense that it was part of Rome.

Byzantium itself however ends quite distinctly, clearly, and dramatically, that day in 1453, but I've always been fascinated by the way many Empires just seem to fade away with no distinct point at which it can be said to happen.


September 4th, 476 AD, is commonly said to be the date the (Western) Roman Empire fell. On this date a German Ostrogoth (a "barbarian" if you will, as they've often been portrayed when contrasted against the Romans), Odoacer, captured the captial, Ravenna (the city of Rome itself had already long ceased to be the capital) and compelled the emperor to abdicate.
But long before this date there had already been all kinds of shenanigans that would fly in the face of the traditional portrayal of the empire as being ruled unquestionably by a single emperor. De facto control of the outter provinces had been in the hands of German "mercenaries" (who often were "mercenaries" in name only and just did as they wished) for more than a century and many prior emperors and ruled in name only. Even Odoacer officially ruled in the name of an Eastern-Empire-approved emperor for a time after this but by now the sham was barely worth keeping up.

I think the situation in Britain is a particularly interesting case study in this. By the beginning of the 5th century (that's of course the 400s), most of Britain had been part of Rome for several hundred years. With the rest of the Empire crumbling and being far from the heart, Britain was increasingly under attack from all sides and becoming a very precarious location to keep attached to Rome.
The harried Roman troops on the island, seeing a complete lack of effective control from Rome, decided to do what many Roman armies had done of late and declare their own emperor (again, they'd done it themselves several times before). This man was a member of the army who they declared Emperor Constantine II. He gathered up all the Roman troops in Britain he could find and sailed across the channel and marched across Gaul to take Rome for himself. He got about halfway there and was soundly defeated in battle.

More Roman troops were never sent to Britain, as the Empire had no one to spare. There was never a memo sent out notifying them that they were no longer part of Rome, however, so what was left was a Roman province without Roman troops, and no one left in charge. Local troops were raised for immediate defense (and indeed a memo did come from Rome telling them they should do that), and I'm sure there were local officials officially in charge, but by and large what was left was a country without anyone clearly in charge.

Needless to say there appear to have been some peasant uprisings (archeological evidence points to a lot of burned villas at this time), and gradually leaders did appear. These leaders claimed to rule the entire province in the name of Rome, however.
First we have Vortigern, who appears to be a largely historical (ie factual) figure. He exercised authority for a time as chief official of Roman Britain, but as Angles and Saxons pushed in in continuing little minor invasions and the Picts pushed in from the North, another leader, known as Ambrosius Aurelianus rose in prominence. This fellow's authority was also backed by Roman aristocratic lineage, but he appears to be a political rival to Vortigern who rose in prominence as Vortigern proved ineffectual against the "barbarian" onslaughts.
Aurelianus also appears largely historical though he does appear in clearly mythical situations in some of the legends that surround his more mythical successors. Aurelianus is said to be succeeded by Uther Pendragon in legend, a character who doesn't really appear in any historical records and seems to be almost entirely only famous for his role as Arthur's father in the King Arthur legends. And then of course King Arthur crops up as the next king, finally fighting successfully against the Saxon invaders. And of course by the time we get to King Arthur we finally have an entirely British image of the government. The only version of the Arthurian legends to portray it as being a Roman thing is that movie with Keira Knightly. The traditional king following King Arther in the legends is Constantine III, presumably based on an actual King Constantine who ruled one of the kingdoms Britain had been divided into in the 6th century.

And so when the murky period that lacks a clear non-fiction leader who is not King Arthur clears up, we find the island divided clearly into several kingdoms with kings ruling them on their own authority. Many of them being kingdoms of the invading Angles, Saxons, Jutes and Picts, and Arthur's native Britons confined to Wales.


And so it is that Roman control in Britain gradually petered out, largely with no relationship to the continuing "empire" which they might have been surprised to learn hadn't officially fallen yet by the reckoning of historians millenia in the future.