HOLY CRAP! It's June 1st! Totally snuck up on me! Do you know what that means??

It means... Season SEVEN of an ancient tradition known as "30 in 30" wherein brave and foolhardy bloggers make a solemn vow to post an entry every day for all thirty days of June. Not just any crap ass entry, but something genuinely worth reading!! Something of interest to people who don't know you or give a rats ass about you personally.
Yep, that means all those whistful stories about your ex are right out. You actually are going to have to think of something original and insightful or at least hilarious to write about. Extra points for multimedia.

Now, being as these days I'm lucky to get half an entry out in two weeks my attempting to participate is pretty much a hopeless cause.. nevertheless I am never daunted!!! However, for my own entries I really can't promise anything other than a vague attempt to have SOMETHING up in a day, if that. So do as I say not as I do! Because any entries I DO get up will most likely be total crap! :D


In wildly unrelated news starting tomorrow and continuing for the next few days we are chartered by a film crew. Normally we object strenuously to any implication we might be pirates ... for the next few days WE WILL BE PIRATES! IN FILM! We don't know much about it yet but they're trying to get an authentic pirate thing going on. They've asked us not to shave this past week ... yet to wash all our period clothes the night before?!
We're already short handed, but word is the girls won't be able to participate in the sailing (since I guess real pirate crews weren't fifty percent female!) ... AND then they said that of course people who need to wear glasses can't be wearing glasses on screen so... we might be down to non-glasses-wearing males for the shoot.
AND I'm told they've brought cutlasses and black powder small arms for us to play with?!
Anyway, it sounds interesting, and as you may have gathered from the above they've not using actors other than us, so it's possible you might see me as a pirate COMING TO SCREENS NEAR YOU!! 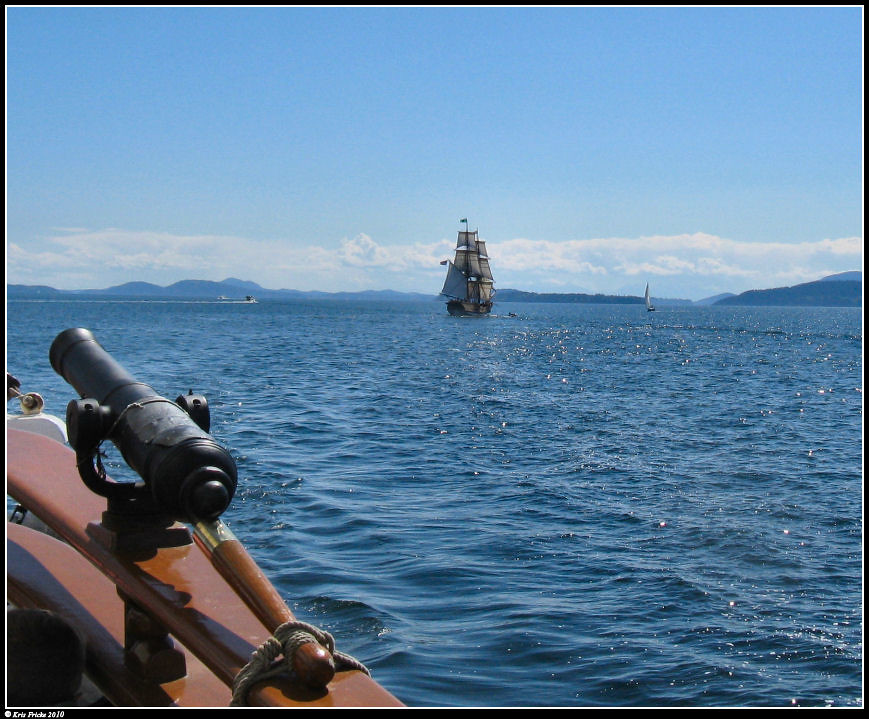