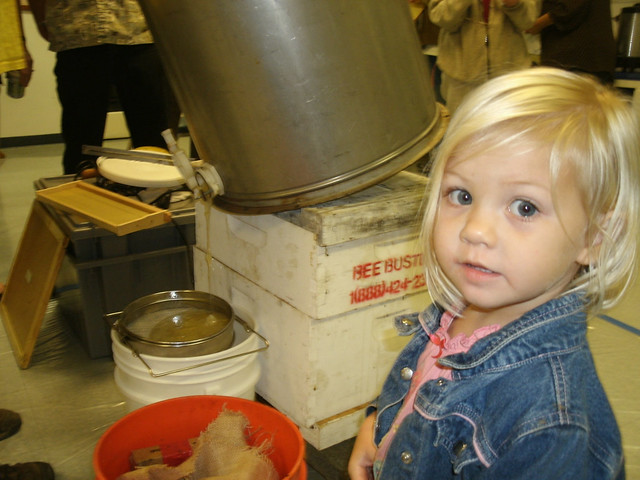 
In other beekeeping related news, yesterday I was musing about making a topbar hive that was the same dimensions as a langstroth hive (sometimes known as the "standard hive" -- the typical rectangular box), so that a langstroth honey super could be placed on top of it or you could put topbars with comb into a langstroth box if for some reason you felt like doing so. Well, my coworker Ryan is quite handy with woodworking and voila yesterday's dream is a reality!

So we had one hive in the gully next to HQ here. The bees in there had come from a feral swarm and pretty much took care of themselves. They looked to be doign quite well.

When I came by her during the rainstorm the river in the gully had risen to higher than the beehive. Goodbye bees.

When the waterlevel receded the hive was not to be found. A few days later Dave found it tangled among some trees a short ways down stream. Reported it was certainly a total loss, was completely full of dead bees and mud. From the weight it probably also had been quite full of honey.

Today he told me to go salvage what I could out of it, so after lunch I hopped over the fence and found it on its side in the gulley. The space between the frames was still choked with dead bees and mud, the whole thing still quite heavy. I set about pulling the frames out with the hive tool. Nearly all of them had mold on them, as well as all manner of bugs crawling about. There were just a few bees buzzing too and from the hive. Bees from other hives often pillage failed hives, but usually that entails a large number of bees bouncing around all the frames. Most of these frames seemed completely untouched and the bees were only travelling in a straight line to or from the furthest frame to one side. One by one I took out the frames from the closer side. Nothing but death and mold and the smell of garbage.
Finally with anticipation I pried out the last frame, hoping against all odds to find surviving bees, but at the same time mindful that as I was wearing a black hoodie (its freezing here! in the fifties!) and bees don't like black (colour of bears), and I hadn't smoked them, I'd be liable to get mauled in the face if there were surviving bees.
As I pulled off the last frame a few bees took off from it but that was all. Nothing else there except more muddy comb. So I moved the comb with more of a fast jerky motion than I normally would if there were live bees there, as there didn't appear to be, and a whole bunch more bees buzzed off it. I took a closer look ... there under a layer of mud there was a hollowed out cavity full of bees! They had survived their hive being completely waterlogged and floating downstream, plus a week of living in a damp moldy postapocalyptic hive!!

I couldn't examine their refuge cavity without potentially disturbing it greatly so I couldn't determine if they still have a queen, but I'm extremely curious to see if they'll be able to bounce back from this!!