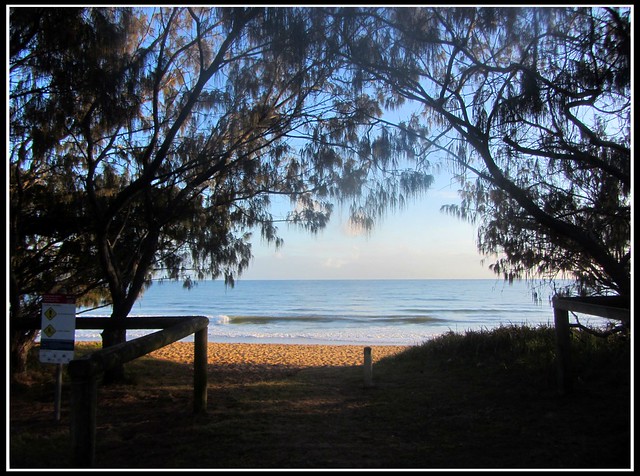 This morning I awoke at 0900 uncomfortably hot even with no covers on. So without even fully awaking or even thinking too hard about it I got up and stumbled outside and down to the beach, where I plunked down in the grass just off the beach, under a tree like one of the ones pictured above, and continued my attempt to sleep in.
Unfortunately, I was plagued by a bit of a headache and general feelings of having drank too much the night before (during my wild night of drinking alone and watching Season 2 of Walking Dead), and after getting up at 05:30 all week for work, 0900 felt like noon to me. Was able to lie in the grass until about 09:40 though.
Went home and waiting for Sam, my housemate, to come back because he'd said he'd drive with me to the farm to drop off my damaged truck. Finally at 1100, with no sign of him, I resolved to just drop it off and walk the 5.7 miles back. Arriving at the farm I found packing operations in full swing (despite it being Sunday. The farm never sleeps!), and of course Trevor was right there (again, considering how many different far flung properties the farm has, I'm amazed by how omnipresent Trevor is!). He said the mechanic isn't in today though, so I drove the ute back.

Stopped by the "Seaside Tavern" (on the landward side of town, naturally) on my way back. It's next to the grocery store, pizza place and video store -- the modern little strip mall that apparently put all the shops in the real downtown out of business. 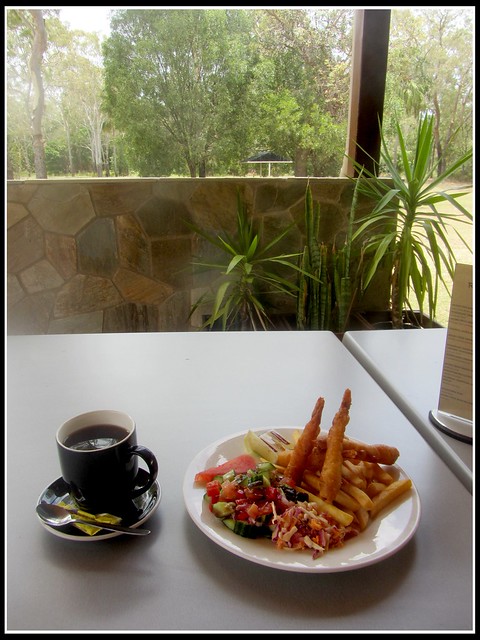 Had the pictured battered prawns and coffee. I still think the coffee here is shit. The prawns had somehow been straightened out, I'm picturing someone in the back with an ironing board and iron.

Returned home and set out to stroll about town. It was at this point hot and the sun was shining, but the wind was blowing a bit briskly for a swim to seem likely. 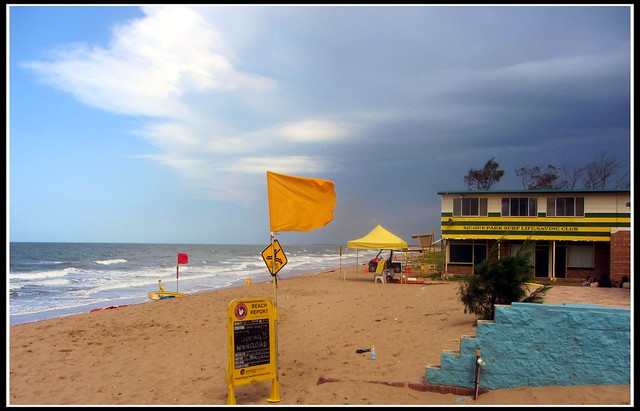 Close up of that sign: it says "LIGHTNING, BEACH CLOSED =) " I'm not sure what the smilieface is about. Also it notes that the water is 23c, which is 73f. Warmer than "room temperature!"
The building says "Surf Lifesaving Club" and has a "Victoria Bitters" beer sign on it, so I was extremely unsure if it was actually a bar or what -- since I've found "clubs" of various types are often a sort of bar with a membership (though anyone can usually wander in and fill out a guest card). I peered in some windows to try to answer this question but it was inconclusive.

Next I wandered into the "Kiosk Restaurant," in which I met two very friendly young people, a brother and sister aged 19 and 20, who worked there. Spent a fair bit of time talking to them and getting the low down about the town. Apparently the big news is that a month or so ago a pygmy sperm whale (I had no idea that was a thing!) washed up on the beach. Their grandfather also wandered in wielding a digital SLR and we talked cameras for a bit.
They advised me that the "Bowling Club" in the center of town was a good bar to hang out at. See I never would have read "bowling club" and thought it sounded like a place to go for drinks. Apparently "lawn bowling" is some kind of popular sport in Australia ("what is 'bowling?'" mused the girl "well, basically its a bunch of old men standing around playing with their balls"). Also the Bowling Club has a courtesy shuttle that'll pick you up anywhere in town and drive you there (during certain hours). The girl's fiance apparently works at said club. 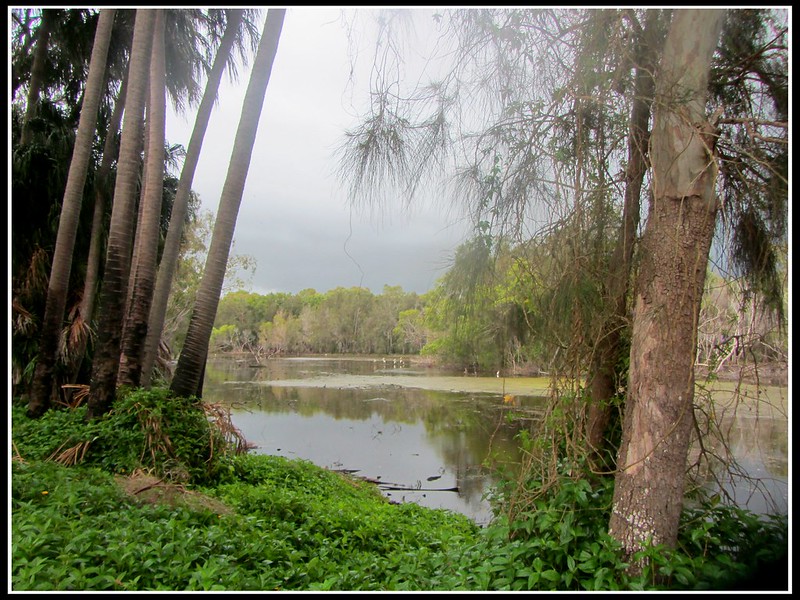 From there I wandered down to the lagoon and poked about. I had crossed to the other side (via a bridge with a gazebo in the middle of it) and gone a little ways when suddenly the rain hit in torrents. I dodged from tree to tree until I was safely back under the corrugated metal roof of the gazebo. From here I was relatiely protected from the rain and had a great view of it falling on the lagoon all around me: 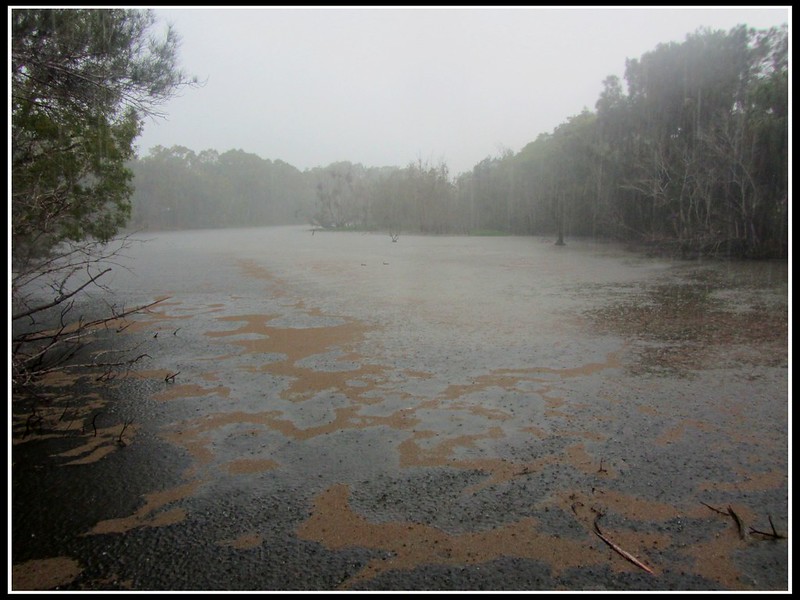 Oh also there was a lot of thunder and lightning. Also it smelt of rain. Unfortunately for my plan to wait it out there, the rain did NOT seem to be lessening, and in fact began to come down at more and more of an angle so that the gazebo roof no longer protected me. I consulted the map the kids at the Kiosk had given me and it looked like the Bowling Club was only a hundred and fifty yards away or so so I resolved to make a mad dash for it.
It was indeed not terribly far at all... but I was nonetheless completely soaked by the time I got there. I tried to order a cup of coffee but was handed a cup of hot water and a packet of instant coffee, blech. Some real coffee would have been really nice at the time too.
I asked if the courtesy shuttle could take me home, a bit abashed since I hadn't ordered anything that cost money (the shitty coffee was free at least. but I wasn't in the mood for a beer and that seemed to be all there was), but the guy behind the bar readily agreed and after helping another customer he headed out to the courtesey shuttle with me. Turns out he was the Kiosk girl's fiance (and her name, btw, was Cheyenne, like the pepper!) 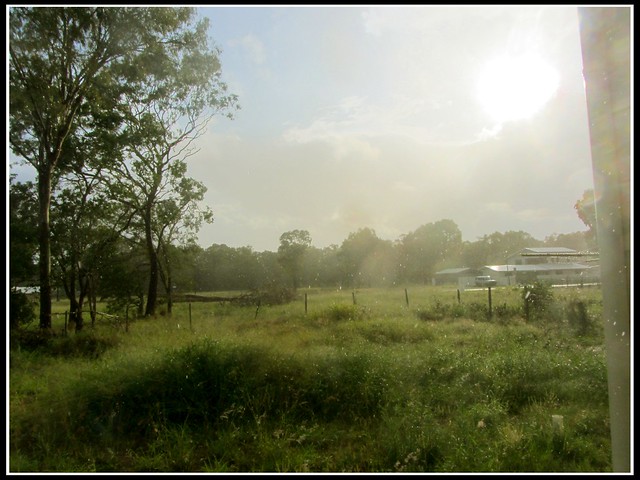 By this point it was still raining, though not as hard, and the sun was out. Also the road in front of the house was half flooded. I took the opportunity to take the above picture, which is from my front door looking out inland across my backyard. You can see it's a bit unkempt... kind of like the rest of the house d:
My housemate came home around 17:00, which is really early for him. I'd find out later its because half the tomato field flooded and he was stranded on the wrong side of the water with a 2 wheel drive vehicle. Finally two hours later someone rescued him, but no more work could be done anyway. Plus I think he's in charge of irrigation (?) and that was clearly taken care of for the day.
He'd had at least three glasses of whiskey by the time I headed out at 19:00 to go have a steak at the tavern restaurant. The tavern restaurant is actually quite nice and feels a bit fancy. I sat in the exact same place I sat when I had the batterd prawns for breakfast/lunch, which is on the edge of the outdoor covered patio, so I could enjoy the rain. Unfortunately there were a whole bunch of shrieking kids nearby which severely hampered my enjoyment.

On my return home the housemate was strangely talkative, often returning to things he'd already said and saying them again as if I hadn't already. Though with each retelling the percentage of the tomato crop he thought was probably ruined by this rain increased, from an initial 40% to 60$ to 70%. I thought this rambling was a bit odd until I remembered the rate he'd been drinking before I left, and now it was an hour and a half later. Then he suddenly announced he was driving off to pick up his friend. While in a state of sobriety I wold classify as "wasted," while its raining, while half the roads are flooded.
Fortunately he did succeed in returning alive. He does this kind of thing regularly though and I fear it's only a matter of time before he gets in a serious accident.

Anyway, that was my Saturday! First whole day I've had to myself in the "town" of Moorepark, and you know, it really wasn't so bad. Tomorrow after work the Kiosk grandfather and I are going to meet up the Kiosk to talk cameras some more, I discovered two nice bar-like-places in town, and a delightful walk through the lagoon. This place is growing on me a bit I think, and I hereby upgrade it from "nowheresville" to the status of "hamlet."


( Browse all the pictures from today here -- including a number of shots of the lagoon I didn't manage to wedge into the entry ;) )
Collapse