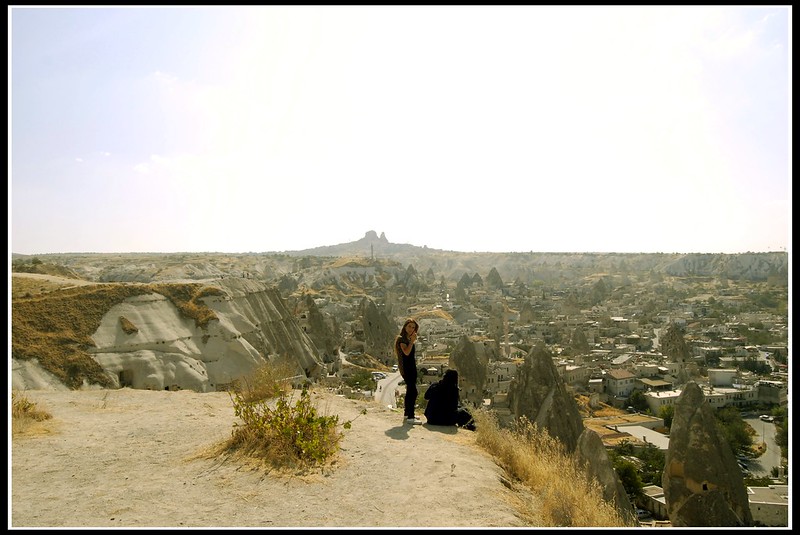 Having explored underground cities and dared to eat "teste kebab" the day before...

Thursday, August 22nd
The thing with waking up in a cave is it's still pitch black no matter what time it is. Also, it's frigid. Fortunately, being as I was the only one there, I didn't mind turning on the lights and making noise immediately -- I've found many other backpackers seem to make a habit of sleeping till 1pm. In the morning I just sort of explored the local area, which was more than adequately stocked with interesting "faerie chimneys" (as they're euphemistically called in official literature, we all know there's no two ways about it, they're giant rock penises) and otherworldly panoramas. The above picture is taken on the ridge just above my hotel. That knob in the distance is Üçhisar, pictured up close yesterday.

Came back to the hostel around noon to escape the heat and found two Italian fellows moving in to my room. Had a quick bite to eat at the most local-looking kebab place I could find, asked for tips on other places to walk to in the vicinity and was recommended Love Valley and given a crude map. 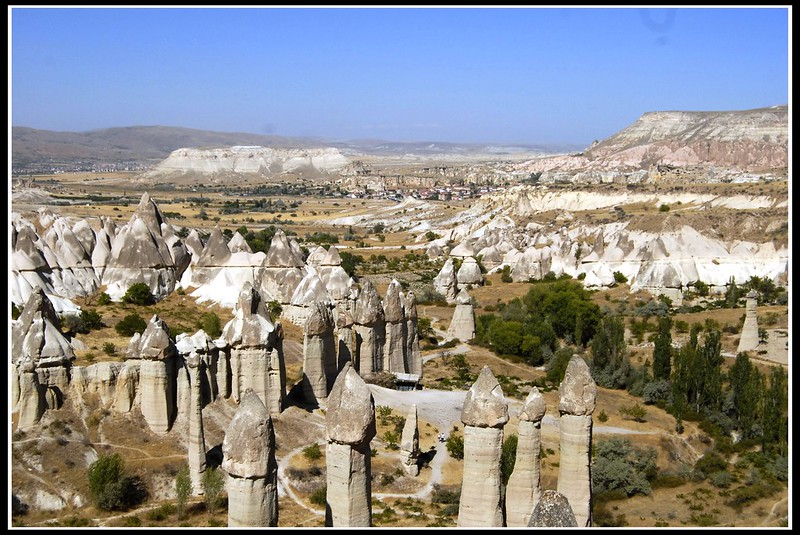 Basically, according to the map one follows the road out toward Çavuşin, turns left where it forks and "you can't miss the valley entrance."
Well I did. Completely failed to find love    valley. But turned left at the next road and found myself following the valley rim. The above picture is from the rim about where that road is really close to it, looking back toward Çavuşin. By now I'd been walking an hour (5 km) and there was no shade up here, and I hadn't brought much water because my experience from the other day told me there were people selling freshly squeezed orange juice at all the most improbable middle-of-nowhere places. I could even see one of those booths down below (you can see it in the picture)! And I figured since following the valley rim curved in and out a lot it would probably be a much longer route to where the valley ends at Üçhisar, so I wanted very much to get into the valley, which looked lush and interesting and full of freshly squeezed orange juice.
But first, an interesting fact: The previous day the tour guide had informed us that Cappadocia means "land of wild white horses" "...but there aren't any more wild white horses here." Well! During my wanderings I saw exactly that, a wild white horse crossing the road with its horse-family.

As to getting to the valley floor, the cliff face was a sheer drop in most places and very steep where it wasn't. In addition, it was this crumbly sand stone material that afforded no footing whatsoever. There were places where it looked like I could walk down a bit but I couldn't see where I would go from there, and I wouldn't be able to get back up... which could leave me in an extremely bad position.
Finally I got to a place where it looked like it was a _relatively_ gentle (less than 45 degrees anyway!) slope down and I thought I could make it. I got most of the way down and it looked like I could see the floor right ahead of me. I slid down one last bit that was a little steep and ... found a 20 foot dropoff in front of me.

I investigated my backtracking options but I couldn't get back up. I investigated various options for trying to get down the dropoff but I could hardly get near it, nothing would support my weight without crumbling. I couldn't go up, I couldn't go down. No one knew I was here, no one had any reason to come up this side canyon -- I thought about that movie "157 Hours." Cutting my arm off wouldn't even get me down the cliff though.
Off to my left it looked like the slope did actually descend to the valley floor in a traversable manner, but I'd have to wildly jump and hope not to slip either leaving this side or arriving on the other side, an unlikely prospect. I tried putting some weight on some larger rocks sticking out of that side in hopes I could use them as leverage but they all came off in my hand. All but one. Even that one I was afraid to pull too hard on lest I dislodge it too. It stayed put with at least a little of my weight on it, so I resolved to essentially support half my weight on it and use it to guide my jump as I jumped across. ... 3, 2, 1...
Annd I made it! It was just a short easy clamber to the valley floor from there.

From there I made my way back into the main canyon and found the trail heading up to the Üçhisar end. It was well worn and I occasionally passed other hikers coming back the other direction, though I unfortunately didn't find any more orange juice stands.
Periodically the trail would split and either come back together or one end would turn out to be a dead end. Eventually I wasn't running into other hikers any more, and was having increasing trouble finding any semblance of a trail. I think the main trail must have exited up a side canyon. Instead I had to traverse up and down the steep slopes on either side of the dry creek bed, attempting to navigate my way around and through the scraggy shrubs. In addition I was becoming extremely thirsty, since I'd only brought a small amount of water, and at this point had been wandering around this rugged landscape for hours. I began to worry that now I might become extremely dehydrated deep in the back end of a desolate canyon.
As time went on this became an increasing concern. My course continued to be up and down and around and around and backtrack a little from some thorny shrubs. Found a few interesting less-visited man made caves at least. Then I found a wild grapevine loaded with big plump grapes. I stuffed my face with them like a starving man and took a big sprig of them with me as I continued.
Fortunately this back end of the canyon was just a little less insurmountable than the cliff walls earlier in the canyon, and I was able to scramble up an area where course tufty grass held it all together.

In conclusion, love is a treacherous and desolate chasm that almost kills me. 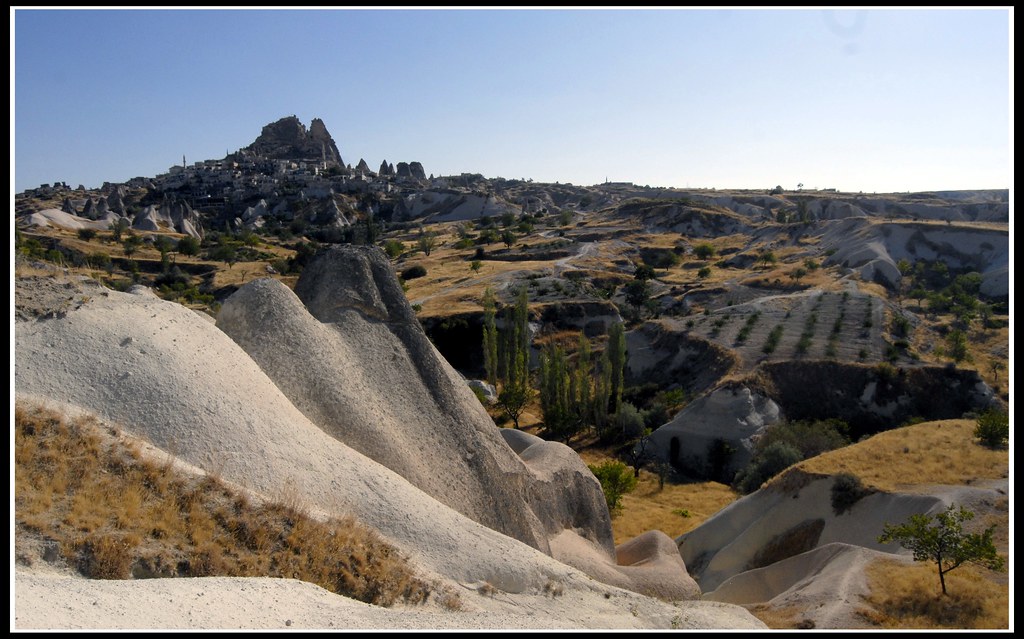 Here the above pictured view of Üçhisar near at hand presented itself. There was a dirt road here which I simply followed along to navigate between the steep gorges which were all about. Presently I saw a building up ahead and... what looked like five people excitedly waving at me??
The building was the jewelry workshop yesterday's tour ended at, and the five people were the Koreans I'd met at dinner yesterday! Today they were on that same tour!
"Where did you come from???" they inquired, as it looked like I'd just emerged out of a random rugged ravine no one would ever have any reason to ever be in.

From here I continued to the village piled up on the castle rock. Remember that far distant knob in the top picture of this entry? I had just walked from near where the picture was taken all the way to that knob, by a treacherous and extremely roundabout route!
After going up and over the hump through narrow ancient streets I came upon the most idyllic little cafe on the far side: 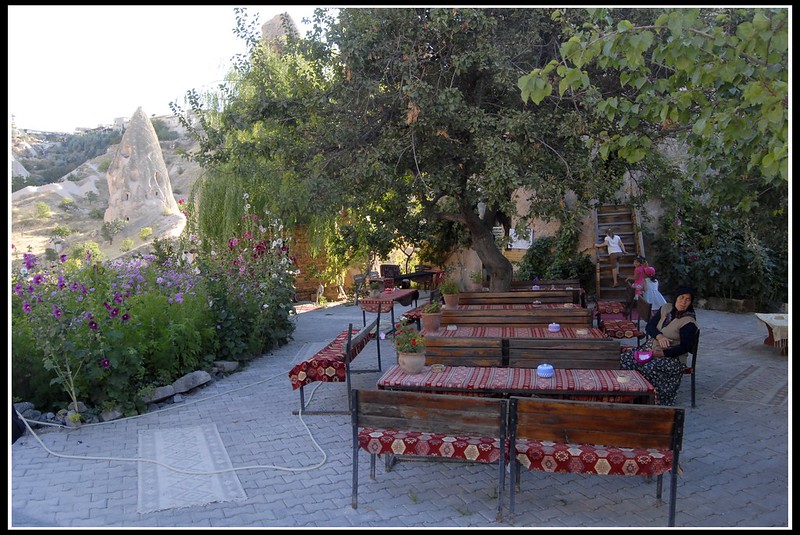 The proprietor was a very nice man who happens to live in the dragon-tooth shaped rock you can see that ladder leading into in the back there. He happened to be talking to another turkish man who spoke very good English, had been to the United States a few times to look at gemstones or some such. I had some water here and recuperated in this lovely shady place while talking to these pleasant fellows.
The man who lives in the tooth gave me a little brochure with pictures of the rooms inside the tooth (they looked very nice, all snug and bedecked with rugs and such) and told me next time I come I should stay there. "How much?" I asked, intrigued. "No cost, Turkish hospitality!" he exclaimed. !

Also there was this view of the back side of that castle rock: 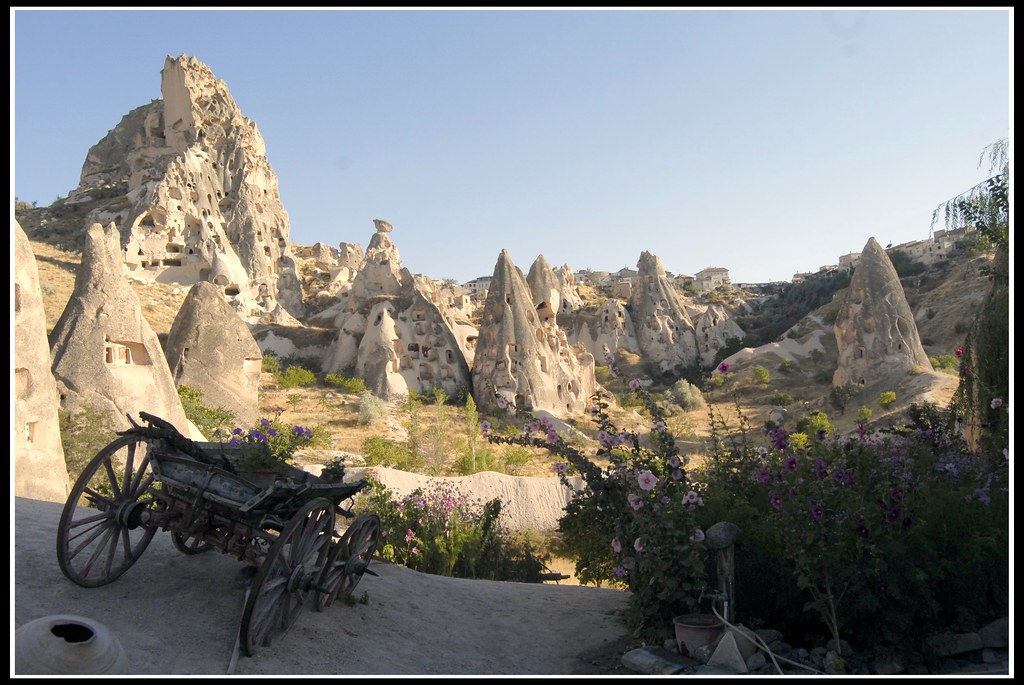 From here I went over to the castle rock and clambered all over it and took lots of pictures.

The shadows were starting to lengthen by this time and I'd had a really long day of bushwacking, and still needed to walk back to Göreme! (2.3 miles by the most direct route)
This walk was fortunately uneventful and straightforward, though the sun had set ere I reached Göreme.

Arriving back at the hostel I found the Italian lads in the room and invited them out to dinner, took them back to Tolga's restaurant. That evening we looked for something to do but one thing Göreme is not, I guess, is the kind of place with any bars or nightclubs, though there were some cafes open fairly late where one could chill out and drink beer or tea and smoke the waterpipe. I also exercised the one Italian phrase I know, "porco deo!" ("pork of god" apparently its a totally real Italian curse!!) at any opportunity which seemed possibly appropriate. 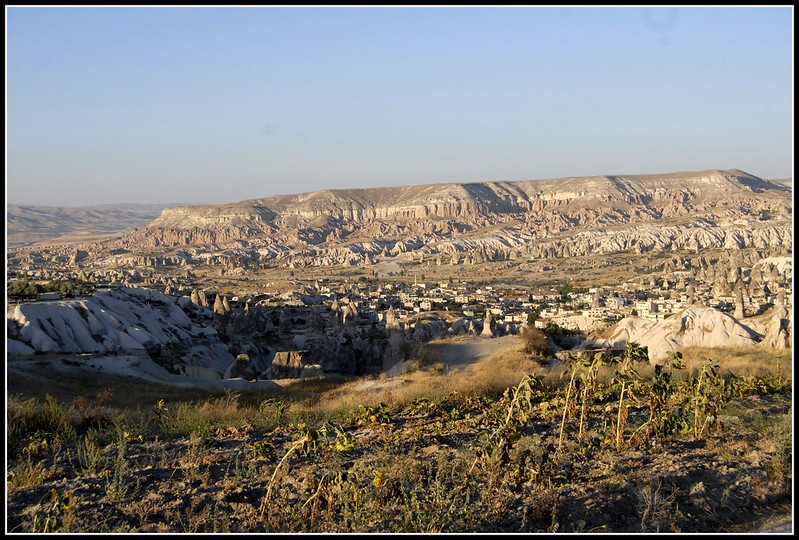 Göreme from the ridge above it as the shadows lengthen.

Next episode: off the the land of the lotus eaters!
Collapse