This morning I finally got through to the Victorian Apiarist Association (VAA) -- the beekeeping club of the state of Victoria. I'd been calling them between two and four times a day for the last week because their annual conventions begins, well, tonight. They don't exactly have _any_ information about the convention on their website or anywhere on the great wide internet. Apparently it was in their newsletter, which I don't get since I'm not a member yet. My only lead had been that I'd gotten the date from the Geelong Beekeeper's Association newsletter, but they said to see the VAA newsletter for details. So all I had was the date.
And I can tell you I was getting increasingly concerned as by this morning was pretty much the "eleventh hour." And granted the voicemail on their phone line does mention that the phone is only answered on a part time basis but boy had I been trying to get ahold of them.
Anyway, so they finally answered and told me the town and hotel it would be in and that I could indeed register on arrival. Turns out the convention was in Wangaratta, at the other end of Victoria, four hours drive away!

So I finished up making frames around noon, told Cato to hold down the fort for a few days, went home, threw a bunch of clothes OUT of my suitcase (it was all in my suitcase still since I just moved in the other day), and I was off!! 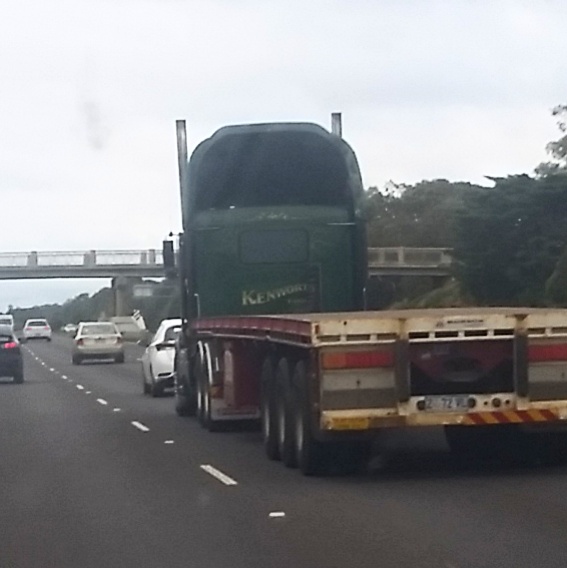 Now this is certainly the most memorable thing to happen during the drive. I look in my rearview mirror and see nothing but the bull-bars and grill of a big rig right on my ass. So when I get a chance I merge into the lane to my left, the slow lane.
But then I watch as this truck gets right up behind the next car, until it gets out of the way. And then it does it to the next. I'm talking literally half a car length, which is closer than you should get in a small car much less a giant truck. AND keep in mind that none of these cars were slow-poking it, myself and them were all going almost exactly 100 kph, the speed limit.

Soo notwithstanding my earlier post about driving, there ARE apparently _some_ asshole drivers in Australia.

Traffic was annoying as I passed Melbourne on the outer ring roads but then once I was out of town on the "Hume Highway" headed north it was less trafficky. The weather was off and on drizzle, but the road was pretty straight, and the scenery on either side was cow pastures and sort of sporadic tree cover. It was weird to realize I'd apparently already been this way, on a random roadtrip I went on with a friend earlier.

Australia has some great funny place names, and when a sign came by announcing the next two towns to be "Violet City," and "Dookie" I grabbed for my phone to take a picture of the sign for y'all, but was far too slow.

Unfortunately it was getting dark by the time I pulled in to Wangaratta, but it was about six and the initial social evening event didn't begin till 7:30. so I walked down the street to find dinner. Happened upon an indian place which sounded good. I was the only one there when I walked in which was a bit alarming but it later got quite a few more people in. The dining room was cozy and being the first one tehre I got to snag the table just beside the brick fireplace that had actual logs crackling in it, which was just delightful.
And then when my food came (some kind of chicken stewed with fenugreek and garlic naan, and lassi to drink), omg it was to die for. Possibly the best indian I've ever had, including that place in Addis Ababa I've been raving about for years. If you're even in Wangaratta, Victoria, Australia, I highly recommend Tandoori Paradise!!!
Spent ten minutes trying unsuccessfully to log in to yelp to give them a rave review (at the end of a tedious registration process it told me my email was already registered, but didn't like any of my usual passwords paired with that email address) and eventually threw up my hands and gave up on being a good yelp contributing citizen.

Once the social evening began I determined there were probably about 100 people there. As usual they were mostly old stodgers and I could quite possibly have been the youngest person in the room. The few people I talked to often led off with "so you're getting into bees are ya?" which I thought was funny.

Anyway, the conference proper begins in the morning, I'm looking forward to seeing how the Victorian Apiarists hold a convention! (: