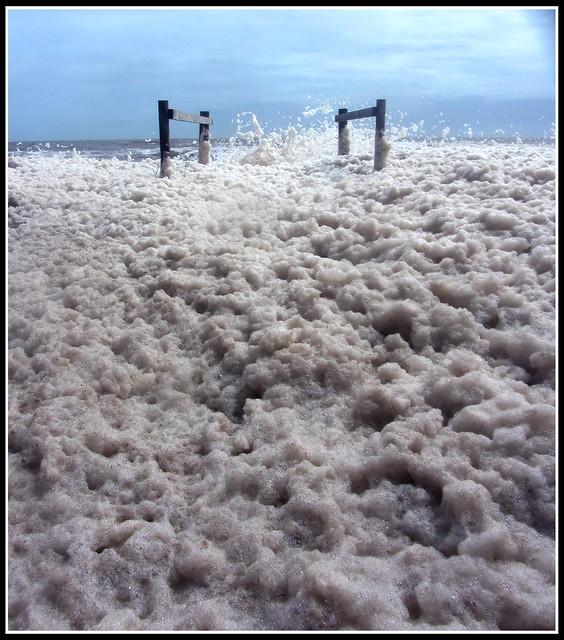 You can usually see it coming, a solid wall of grey stretching from the ground all the way up to the clouds. Its just a few miles across, so you can see blue sky on either side of it. Sometimes it passes right by you. I've watched two of them pass on either side of me, flashing with lightning, without feeling a drop.

When I'm in its path though, I can watch the tomato field disappear into the grey as it approaches, hear the approaching sound of rain hitting the plants. When it's about to hit me I put the lid on the last hive I was working on, cover everything that shouldn't get wet, and jump in the cab of my truck as the wall of water hits. I sit there and enjoy the fresh coolness the rain brings to the air, the wonderful smell of fresh rain on dirt, and then, in about ten minutes, its over as quickly as it started. In its wake it leaves a stifling high level of humidity. In an hour the water has all evaporated and you'd never know the rain squall passed through.

For awhile these things seemed to come through like clockwork at around 9am every morning.

"Yehh, we haven't gotten any rain this summer, it's been dry as" says Trevor, standing barefoot in the dry red dirt next to the chili fields. Nothing's flowering, the bees aren't packing away any honey. The lagoons and reservoirs are drying up. We'd only gotten 7mm of rain compared to an average of 173 (6.8 inches) for that point in January.
These little rain squalls don't even show up on the weather report. I guess they really don't count for anything. Back home in California it either rains or it doesn't.

Finally one morning I looked at the weather report and it had "heavy rain" for every day of the next week. "Well, that should get things going" I thought. Looking at the satellite image, a huge ominous spiral of cloud hundreds of miles across was just above us. Seemed a bit alarming, but no one seemed concerned.
I woke up at my usual time on Friday, but it was clearly pouring and the forecast was for it to continue all day, so I just sat back and drank my coffee. Trevor called and asked what I was up to "just watching the rain," I said,
"Ah, yehh, no worries. Hey since you won't be working in this why don't you bring your ute down here some time today and we'll have the mechanic service it."
So I took a leisurely morning finishing my coffee and about two hours later dropped off my truck on the farm and was driven back home.
And it kept raining, and raining. 4 inches (102mm) had fallen out of the sky by the end of the day.

The next day was Saturday, January 26th, "Australia Day." Once again I got up at the usual time and watched the rain pouring and pouring outside. It being Australia Day, I thought I ought to see what festivities were afoot, so I called the "courtesy shuttle" of the local restaurant-tavern at the corner of town and asked them to come pick me up.
"This is a bit full on isn't it?" I commented to the driver about the rain.
"Yeah, we usually get heavy rains in January but we expected them earlier. The road out of town will probably be closed in half an hour though, and I live in Bundaberg, so I'm about to evacuate myself."
There were a lot of families at the tavern, but nothing particularly exciting. I had a burger the Australian way (with an egg on it) to celebrate Australia Day, and reconfirmed that an egg absolutely does not belong on a burger. Took the courtesy shuttle back and found my street to be under a minimum of a foot of water. The new driver commented that they probably wouldn't be able to continue the courtesy shuttle service much longer. I rolled up my pantlegs and jumped out of shuttle into water halfway to my knees.
And it continued to rain and rain. During a calmer moment I saw the neighbor kids out swimming in the street. Literally swimming. 4.6 inches (118mm) fell on Saturday.

Sunday morning I awoke with a start to the sound of a high pitched warning alarm. I dashed out of bed to find my smoke alarm going off... for no particular reason. Going to turn on a light though I found the power was out. I picked up my phone but it was dead. It was raining lightly at the time but I looked out my window and was shocked and concerned to see that my street appeared to actually have a current now, flowing like a river.
I turned on my laptop but it informed me the battery was at 0% (I'd left it on but when unplugged its supposed to turn itself off after 20 minutes, I don't know why it didn't). I hastily checked the weather report and saw a predicted 10 inches (252mm) of rain, before the laptop shut itself off. Leaving me sitting there in disbelief. The average January rainfall is 173mm and we're supposed to get 252 IN ONE DAY???

Throughout most of the day I watched the rain coming pretty much horizontally past the kitchen window, and every ten minutes or so mopped up all the water that had come in under the door (and I had all my roommates towels there to try to stop it!). I bottled the 30 liters of beer I had been procrastinating bottling, started another batch brewing, read some dry materials I'd been meaning to read about bee diseases, and read some of a book ("Emperor" by Conn Iggulden). Ventured out every now and then, only daring to use the downwind door to the house. Though the street was a canal, it didn't appear to be threatening to flood the house. In exposed areas it was hard to even look in the direction the rain was coming from. The power came back in the late afternoon, reinstating my connection with the world (though my phone problem was inexplicable and it wouldn't charge).
Looking at the news I learn that tornadoes have crashed through three of the neighboring communities.

Monday morning I awoke to find it nice and sunny outside. Rain was still throughout the forecast so I waited a few hours, but no rain appeared. Called my boss via skype
"Nah, the roads are still out, probably not today mate. I'll call y-- oh wait I can't -- okay call tomorrow morning and we'll get you back to your ute."
Walking down to the beach I found a ridiculous amount of foam had piled up in huge drifts. The weirdest part was if you waded into it, it was quite warm! 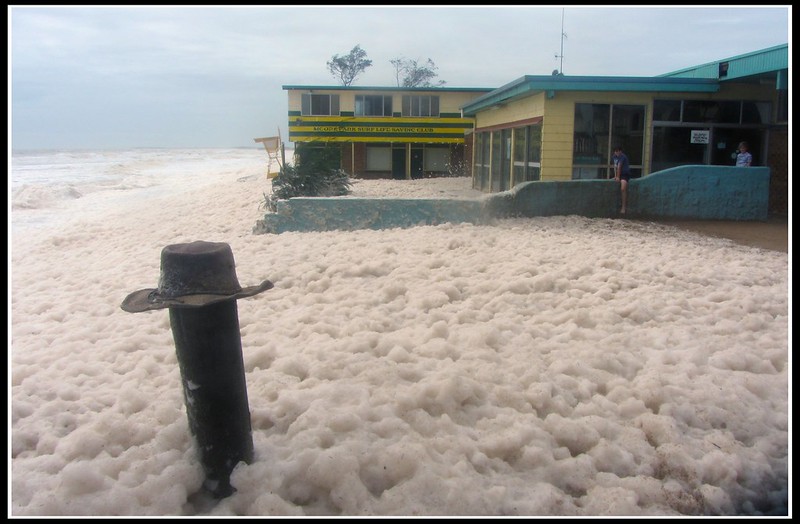 Weather stayed nice (well, uncomfortably hot and sunny) all day, and I went to bed that night looking forward to finally getting back to work the next day.
At 1am my phone announced it was back to life by playing the morning wakeup alarm. Thinks its clever does it.
The next morning (Tuesday) I got up and got ready for work. This time there wasn't even any rain in the forecast. Called Trevor at 0700,
"Oh hey, Kris, how are you today?"
"Oh I'm pretty good, how are you?"
"I'm up to my waist here in water down at my house! Packing the last of my things and we're evacuating!"
"What??"
"Yehh mate, the whole area here is flooded. Lived 'ere my whole life and oI've never seen anything like it!"
He said to call him in a few days when the waters have receded. I must say I was a bit shocked that even having his home and farm completely flooded didn't knock down his cheerful demeanor. As I digested this news it also registered with me that (A) a minimum of the three bee trailers by his house, possibly nearly all of them, may have been wiped out by the flood, (B) my work truck, unless he had someone drive it to safety, may be destroyed.

Looking at the news, I found the nearby town of Bundaberg (through which one must travel to get anywhere else in civilization from Moore Park here) had been flooded, with 17 helicopters working around the clock to pull 7000 people off rooftops.
Walking on the beach (it was another sunny day) I found three different people in the act of relocating clutches of sea turtle eggs that had become exposed, digging a new hole in higher ground and carefully redepositing them. 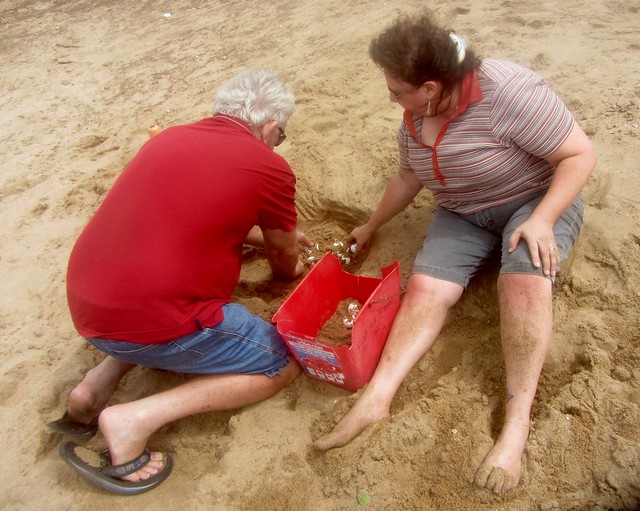 Attempting to walk to the shops, I found my normal path through the lagoon to be too deep for travel. 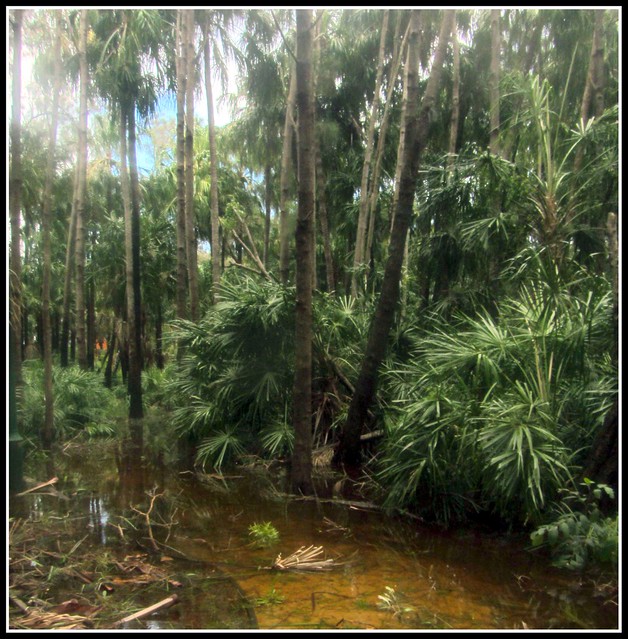 Wednesday morning, while I'm out gathering coconuts on the beach I note that there's a bunch of refugees from Bundaberg sitting in folding chairs in the park by the beach.
"We're very lucky! Most of the evacuees are crammed in a school in [unpronouncable place I've never heard of]" a man says to me, as he pours water on the large black and white cat panting in the grass at his feet. The cat does not object. "And the people evacuated by helicopter all had to leave their pets behind! Old Jervis here doesn't like the interruption to his life but he's very lucky!"
I walk to the shops and this time there's even ankle deep water across the road over the lagoon. You see, Moore Park Beach has a lagoon along the middle of it with only a few crossings, which never seemed like a problem before....
While at that corner of town I confirm with my own eyes that the road out of town is lost under a vast lake of brown water. We're officially an island! Where said main road continues from the corner shops into the interior of Moore Park it is also flooded at the lagoon. The grocery store was a bit surreal itself, with rows and rows of empty shelves, and busier than usual with the influx of evacuees from Bundaberg. I cleared out the last of their canned food.
"They say the bridge across the Burnett River is washed out in Bundaberg" Sean, who runs the pizza place next to the grocery store, informs me. "I'll probably have to close up shop after today, and the grocery store's only going to be getting resupplied by airdrops if the bridge is out." 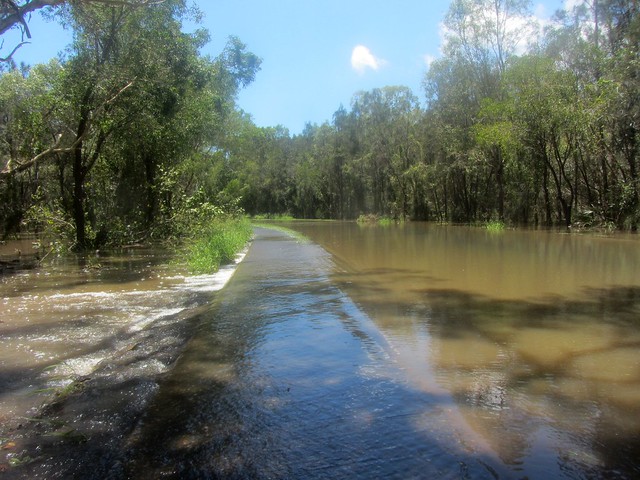 On my way back home an army blackhawk (with pontoons) was landing in the field in the center of town as an emergency rescue helicopter took off.
"Maybe its worse than they thought" a bystander comments to me.

At the time of this writing (Wednesday evening) the Burnett river is said to have topped out at 31 feet (9.53 meters), breaking all records. Waters still seem to be rising here though as the water slowly spills across the fields. At the present moment it is raining. 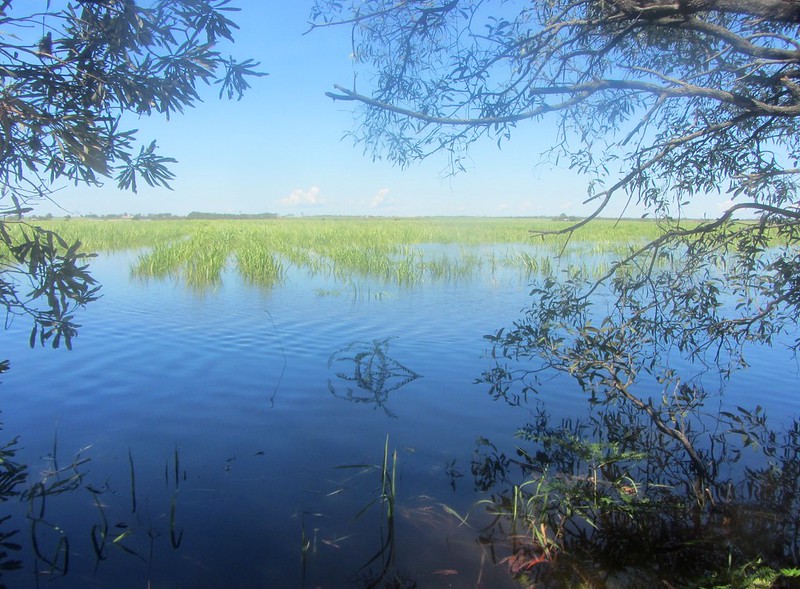 See also: this entry where I posted a few pictures from the news showing the extent of the devastation in Bundaberg.