He's a former marine, veteran of two tours in Iraq ("yes mom, I've been to war... twice" whenever our mom nags him about something), now a police officer. She was an optometry student, graduating a week before the wedding. Despite being the youngest brother he's been the tallest since we've all been adults, indeed our heights are in reverse order. He's big and muscular and yet has a guileless face. He talks with relish about chasing bad guys but he also brings homeless people food and checks in on old ladies. She's blonde and blue eyed and very sweet. They met on.... tinder.
It was quite efficient really, Eric went on tinder, got an app that liked everyone in the area to see who liked him back, and I think had homed in on Lindsay within weeks of getting on it. When she early on used a semi-colon correctly in a message we all declared she was The One.

The wedding was to be on a golf course in Palos Verdes, the nice coastal bluffs by Los Angeles.
"Not the Trump Golf Course right??"
"No, no, that's a across the street."

While some of my cousins on my mom's side have gotten married already, this was the first wedding among my brothers (I have one older, one younger, no sisters) and/or this generation on my dad's side. My dad's family mostly lives in upstate (Rochester) New York so I don't get to see my aunts/uncles/ cousins from that side nearly as much as I'd like, so it was fun to have them all in one place for one of the rare times in my life!

My friend Tiffany came along as my date. We had been in the pre-law fraternity together at UC Davis and when I was the chief justice of the student government she was an associate justice. I didn't end up following a law path (I always say I decided I'd rather get stung in the face every day than work one more day in a law office and put my money where my mouth is) but she graduated law school just prior to my arrival in the states for this trip. Her life is like a Dickens novel: after her father unfortunately passed away he left her a Fishing Quota which I gather is worth a great deal of money but the quota holder must actually qualify as a commercial fisher(wo)man, and I think even be on the boat while the quota is caught, so throughout law school she has had to take summer breaks to go up to Alaska and work on a fishing boat. And she's not some grizzley tattooed and bearded fisherperson but quite sleight and non-confrontational.

Friday, June 2nd - Luau themed rehearsal dinner at the hotel most guests are staying at. Had to borrow a hawaiian shirt from my dad, I have none but he quite likes them and has an arsenal of them. Seeing relatives on my dad's side for in many cases the first time in years was much fun. Also gosh is Hawaiian kahlua pork good mmm.

Saturday, June 3rd - My parents living an hour away they had gotten an airbnb house in the vicinity for the weekend and a bunch of us were staying there. It was fun to wake up and have breakfast with many relatives about. My older brother Tobin showed up in the morning (it's the younger one who is getting married), I hadn't seen Tobin since I believe 2014. He is almost translucently pale and freckled with already-sparse red hair, and milky blue eyes that serpent-like stare at you flatly, soullessly, as they coldly look for an opportunity to say something mean.
That morning I think the only thing he said to me was some rude leading question I don't recall, which I didn't dignify with a response, but later at the wedding he greeted me with"I see you're dressed as inappropriately as I am!" which is probably the nicest thing he's said to me in years.
In my defense, I was tricked! Through no malice I'm sure in this case, but I had brought a suit, which, you know suits don't travel well and take up a fair bit of space, only to arrive and find out the dress code was "dressy casual" and the suit allegedly wouldn't be in order (and I wasn't a groomsman). People knew this and could have communicated it to me before I left Australia with a suit! And I had NOT brought "dressy casual" clothing so I did the best I could with a collered shirt, black pants (dickies), and grey converse I had bought for a friends wedding that had explicitly called for grey converse ... as it turns out I think I was the most underdressed person present as half the guys were wearing suits anyway. Gah.

In the morning Tiffany and I poked around the coastal bluffs and some other touristy sites in the immediate vicinity (e.g. Sunken City), missed being able to tour a Liberty Ship there by five minutes, went down to where I know the two LAMI tallships moor up and chatted with the crew but didn't know anyone there -- they invited us to come on a sail that afternoon though, but of course we had a wedding to go to.

As we all gathered at the wedding itself thick fog was billowing in, which I'm not quite sure is what they had intended but it was beautiful in its own way.
Reception was fun. At one point it was just my mom and her brothers on the dance floor which was cute. Tiffany and I were at a table with my cousins from my dad's side, whom I've seen probably less than a half dozen times in my life so that was fun, the one I last remember as being about as tall as a table and now he's like 6'5". Apropos nothing Tobin drifted by and told them I fake my accent. 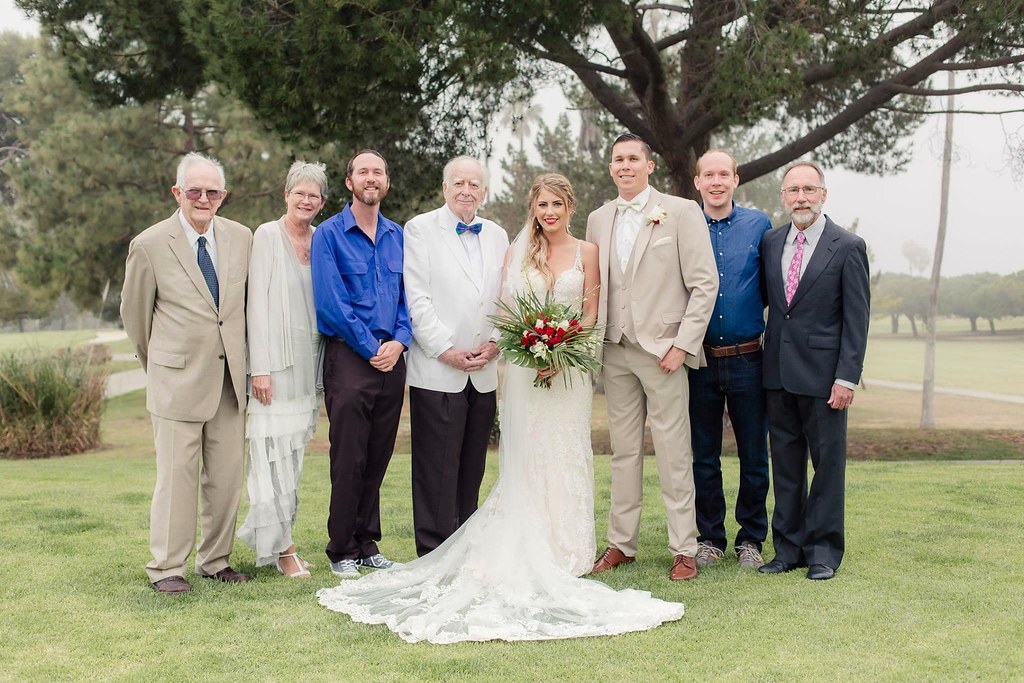 Sunday, June 4th - Third morning in a row we had leftover kahlua pork from the reception dinner for breakfast and still not tired of it! We broke camp and most of us from the immediate family group were going to go to the local botanical garden, I was somehow volunteered to give Tobin and his girlfriend a ride but then when I went to follow the other cars he began squawking that no I was to give him a ride the other direction to some street corner where for reasons I cannot fathom he and his girlfriend were going to catch a lyft. Being as I was annoyed with this sudden interruption to my plans that was put to me without any politeness I pulled over and told to get out. And once he had indignantly done so, since the convoy of cars had now departed I had to spend several minutes googling directions instead of just following everyone else.

And the botanical garden and then a mexican restaurant and then we all dispersed and I took Tiffy to the airport (she lives in Phoenix "it's a dry heat" Arizona). The next day or maybe the one after (who knows any more!) I flew back to Australia, took the train home, the end!!


As it turns out, Tobin and his girlfriend are getting married this September. At first I declared that "I'm not coming back to the States twice in one year!!" but then mom gave me the mom look and I realized that yes, yes I am.
Conveniently a project in Nicaragua happened along which fit in immediately prior to that so I can make a brief stop in the San Francisco area for the wedding on my way back to Australia.
And then this project in Congo which was supposed to be a month ago got backed up until it was right up against the Nicaragua project, hence literally any day now I'll be off to either Congo or maybe Kyrgyzstan (the Organization is keeping KG as a back up plan), and might not return until after the wedding in a month.