July 12th - "It's desert noir" I commented, as I snapped a photo of a ramshackle falling-down old house with junk around it, with Mt Whitney rising up behind it. Somewhere near the Manzanar internment camp.

I'd only arrived in the states just the day before and already we were on an epic roadtrip! My uncle was getting (re)married in a small (tiny) town north of Lake Tahoe, which would have been probably a 10 hour direct drive up "the five" through the middle of California, but we decided to take two days to go up the east side of the Sierras. In fact this plan was a major selling point for me to come to California rather than go back to Africa at this time. Also my cousin Kateri would be joining us, I wasn't quite sure why, but maybe she liked the roadtrip idea as well! 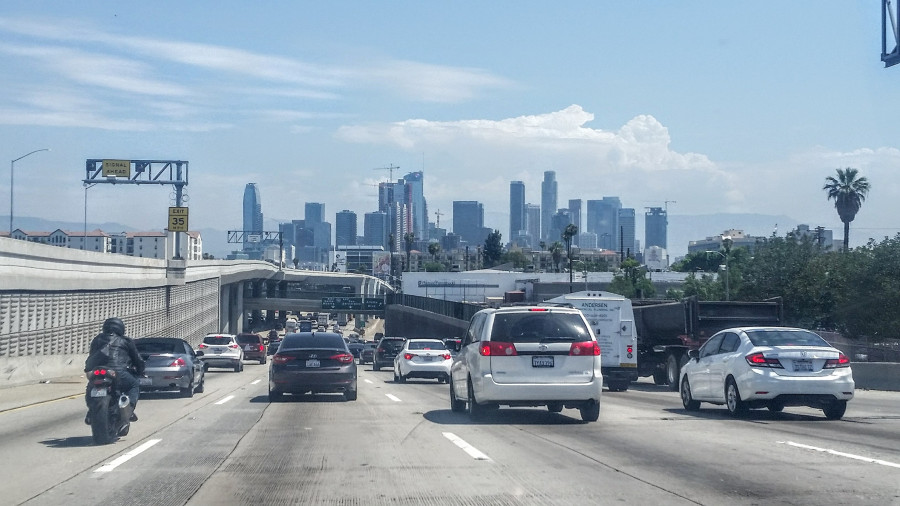 Because Kateri was coming from a different direction (Santa Barbara) we came up from Orange County to fetch her from a train station in the northern LA suburb of Van Nuys. This trip took us on different highways than we usually take and we actually found ourselves driving right through the middle of the cluster of skyscrapers at Los Angeles' dark heart. It took two or three hours to get through LA and we ended up arriving at the train station nearly an hour late... but by a stunning coincidence her train was also running about an hour late and we actually pulled up with just enough time to park and walk to the platform and greet her coming out!

We ate at a nearby In-N-Out and then proceeded through the foothills that surround Los Angeles to the north and east. This route on the 14 through the hills I haven't taken in recent memory and its a much broader less dramatic valley than Tejon Pass which the 5 passes through. On the far side is the low flat town of Lancaster baking in the desert sun, and a little later amid the sage and yucca plants of the high desert there's a boeing facility, which looks like a huge international airport in the middle of nowhere, in terms of hte number of large jetliners parked there. Somewhere around there is also Mojave Spaceport. Then the 14 joins up with the 395 and as we head north the Sierras begin to rise up on our left. By and by we see more extinct cindercones and other evidence of ancient volcanic activity. 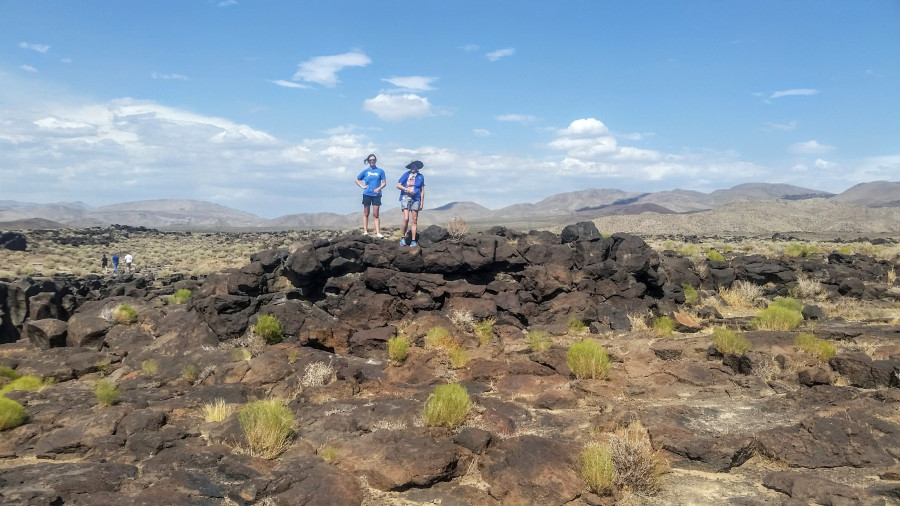 Kateri and mom at Fossil Falls

Kateri, by the way, had just recently graduated from UC Santa Barbara as an English major. She's quite into writing, so we enjoyed talking about books and writing. I'm not quite sure why she has neglected to appear on livejournal, haunt of aspiring writers that it is! She quite prefers Young Adult books and writing, which is not quite exactly my favorite genre but still we had a lot to talk about. 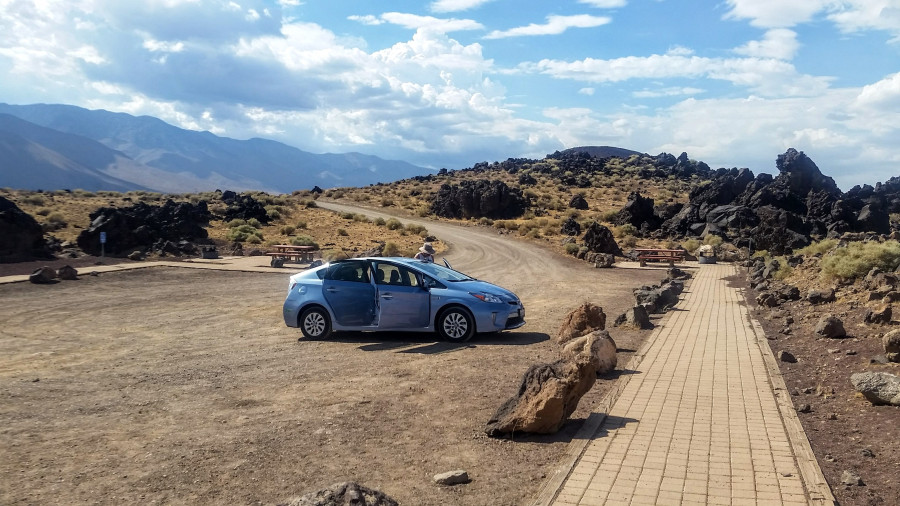 When I was wee we used to drive up this way to Mammoth every summer but I haven't made the drive since then, so it was fun to see the barely remembered sights along the way. At the base of a memorable large red cindercone we turned off on a turnoff for "Fossil Falls," to do a little sightseeing along the way. After a five minute little drive we parked at the trailhead and amid baking 100+ degree weather (which I was loving as I was still trying to thaw my bones from Australia) we took a short hike to fossil falls -- which is a formerly dramatic waterfall through very artistic looking curvy volcanic rocks. Formerly because now the water that fed it is entirely rerouted to supply Los Angeles. 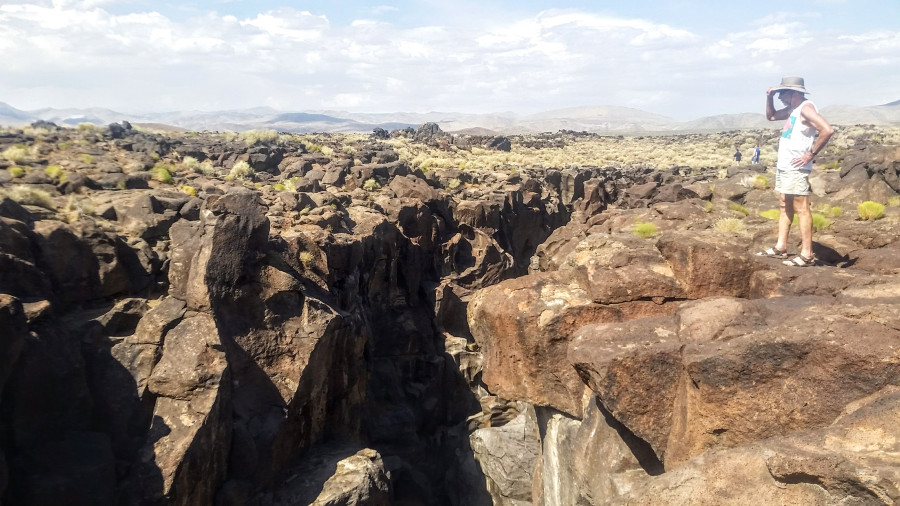 Dad gazes into the abyss

After about half an hour clambering about we were happy to get back in the air conditioned car and continue the journey. We passed the red cindercone (Which, melodramatically, had a large dust tornado in front of it as we went past), and despite the oven heat of moments earlier, soon rain was splattering across our windshield. A strange thing then happened: all of our phones suddenly started making an unusual alarmed warbling noise at once. Looking at my phone I saw I had "an emergency alert system alert" and it was a flash flood warning in our vicinity. Never had that happen before! Good to know the alert system works! We stopped in at the Mt Whitney visitor center at Lone Pine, it wasn't raining but clouds obscured Mt Whitney itself. Passed the Manzanar Internment Camp visitor center and it occurred to me that we've never stopped there and the present political climate makes it seem very apropos. Maybe next time. 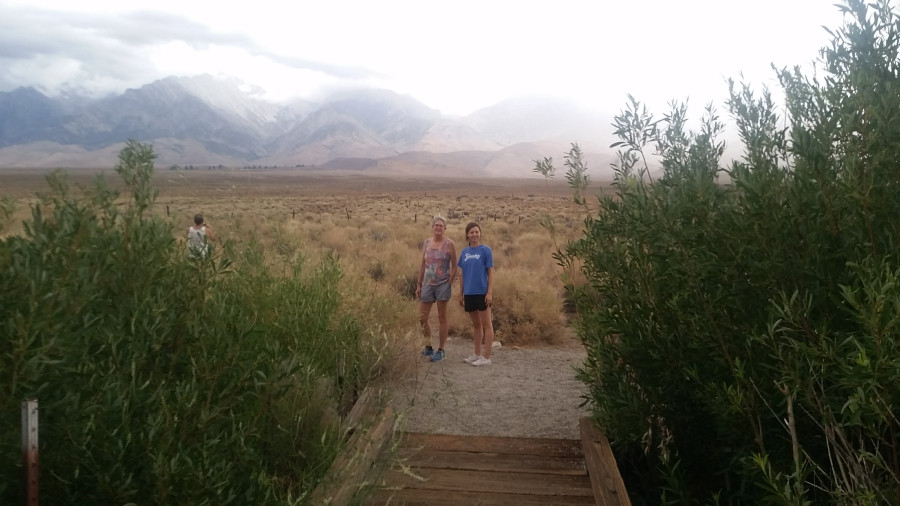 just across the river

At Independence, a tiny little town just up the road from the bigger Lone Pine, we checked into a small motel my parents have apparently made a habit of stopping at (Thanksiving apparently has often these last few years been at my uncle's place we were now headed towards, and my parents have been going up this 395 route to get there). This little town apparently has no restaurants except a semi-permanent mexican food truck (it was actually semi integrated into an old gas station), so we walked over there and I procured a delicious authentic burrito (exciting being as, despite everything that had happened in the previous 24 hours, I still had only just arrived from Australia and not yet had a decent burrito in a year!)
After we ate we walked to a little park where there had been a steam locomotive, but it was gone, replaced by a sign noting it has been taken off somewhere else for repairs. By now it was evening and a pleasant temperature. A very pleasant babbling brook ran through the park and, crossing the river with a cute wooden bridge, a trail meandered out among the low sage that stretched out to the sheer wall of mountains. By the bridge there was a notice sign saying it could be dangerous around the river at times of flash flood and I noted that it was such a time -- we were in the dangerous intersection of the venn diagram. Needless to say we crossed the bridge and proceeded ti walk up the trail. There was that amazingly beautiful smell of fresh rain over sage desert. Even in the city the smell of fresh rain is famously delightful, but among the sage in the desert I think it's arguably one of the best smells in the world. Sure enough it was soon sprinkling, and the rain quickly got a bit heavier so we were thinking of turning back. I happened to glance behind me, and noticed a wall of grey obscuring the mountains approaching us. "uh, guys, look what's coming out way!" I pointed out the wall of heavy rain approaching to the rest of the family. We then more or less ran back down the trail, and it was coming down heavily already by the time we crossed the bridge. Spent the later evening sitting under the eaves of the motel reading my book as rain poured down around us, and the temperature still pleasant enough to be not wearing a jacket!