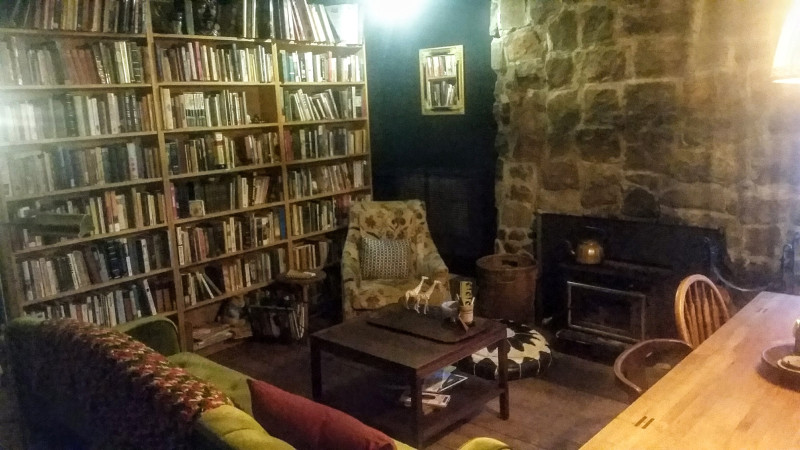 Just about exactly a year ago (2018/07/16), in the above cute and cozy little library room of an airbnb in a small town in northern California, I came across the following book: 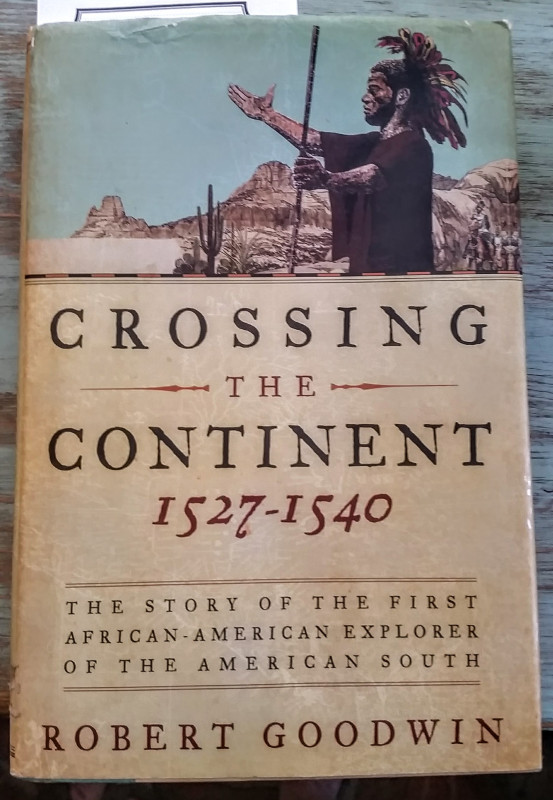 Which at the time I only saw the day we were leaving the airbnb but more recently I remembered it just as I was finishing the recent book about Mungo Park's travels in West Africa in the 1790s. I found Crossing the continent on audible and started it just after the Mungo Park book.

The book is about one Estaban de Azemmour, sold as a slave in the Moroccan town of Azemmour to Spaniards, he is taken on one of the first expeditions to explore Florida and the gulf coast of the future United States. Of 300 that begin the expedition a mere four survive (Estaban, his legal owner, and two other Spaniards), wandering eight years later in northern Mexico where they finally encounter a Spanish slaving expedition.

One source for information about this journey is a book pubished shortly after by one of the Spaniards, Cabeza de Vaca (which amusingly means "cow's head"), but this is filled with wild exaggerations that cannot be true and clearly de Vaca gives himself credit for nearly every accomplishment. The author tempers this account with the official government reports taken at the time the survivors were debriefed, as well as other surviving letters and accounts. The other significant source is the other Spaniard, Dorantes de Carranza, who also takes upon HIMself credit for every accomplishment. The author argues, convincingly in my opinion, that being as in nearly all these disputed cases of credit the one common denominator is that Estaban is clearly present and involved and uncredited with anything, Estaban was the real hero of the expedition but the Spaniards felt free to take credit for anything he did. Of particular note, towards the latter part of their journey Estaban always went ahead of the others to scout the way and arrange things amicably with the Indians they were going to meet, which he always seemed to accomplish superbly, so it seems to me he must have been very good at this exploring and diplomacy.

Also of note, at one point when they seem to be most of the way back they suddenly begin going the wrong direction (following the Rio Grande inland instead of continuing south along the coast). This seems baffling from the assumption they just want to get home, no one could be so bad a navigator as to mistake heading inland to the north-west as better than going down the coast to the settlement you hope to find on the coast ... but the author surmises that Estaban didn't actually WANT to return to being just another slave among the Spanish as opposed to the very free and valued life he was living, and the others lacked the ability to compel him to continue in a direction other than his choosing at this point. And what's more they had to go with him -- he had become the dominant decision maker.

Eventually they do run into a Spanish slaving expedition, possibly a bit by accident. A few years later Estaban is sent off as guide on a second expedition. He soon begins scouting ahead and relaying messages back with indian messengers, which seems like it could be all part of the expedition leader's plan, but soon he never is actually catching up with Estaban but Estaban is continuing to lead him along with tales of being "almost there" to the reputed cities of gold. The author suspects this is leading of the expedition on was to make the expedition thoroughly lost and far from home before he himself went missing. Eventually they do reach the pueblo they were trying to get to, which turned out not to be made of gold but... they are told the inhabitants have killed Estaban and many of his possessions are in evidence. It seems a sad end to this tale.

BUT, the author points out that almost none of the witnesses at the time would actually put to paper that he was known to be dead, just that they were told he had been killed. And the author strongly implies, and I tihnk it's plausible and would like to think it's true, that he knew spreading the story that he'd been killed would be the best way to never be pursued. And then, I like to think he lived happily ever after somewhere free among the native americans.

The author's writing is clear and readible but I did find he had a tendency to go off on tangents taking place thirty years earlier or later following some character that was just mentioned, which could be disconcerting and sometimes gives it a rambling feel. I could wish it had been arranged better in that aspect. In particular, he begins with the expedition's final encounter with the slaving expedition and return to "civilization," but this isn't a normal in media res beginning in the heart of the action, it's beginning with the denoument and continues for a number of chapters before actually getting into the fateful expedition.

On numerous occasionas the author puts forward arguments disputing the conventional belief about a thing, and I find his arguments are often persuasive. He seems preoccupied in the beginning though with arguing Estaban is not a native of the village he was bought by Spaniards in but actualy a sub-saharan African. I find this unconvincing, and it seems to hinge on that when the Spanish wrote "black arab" they could have meant arabized black. Personally I'm not terribly sure why it matters so much.

I think this could make a really good movie. The first African-American trying to survive in the Americas, having experiences with the native americans that are sometimes positive and sometimes negative, but they come off as the complex non-cliche humans that they are. Spaniards that... probably almost entirely come across as bad guys and braggarts. Unite the American theatre audience in backing the "American" protagonist and native people's against the exploitive Spaniards. It could be fun to begin the movie in flashback form with Cabezo de Vaca telling someone about some dramatic aspect of the adventure with flashback to him being heroic, then the scene suddenly changes to Dorantes telling the same story and a flashback of him being the hero in the same scene and then it fades into what _really_ happened.