Monday morning we all awoke to a nice sunny day. People cautiously began to venture out of their houses and look around at the damage. In the tiny community Avondale (pop. 720), across the Kolan River from Moore Park, this included staring at amazement at the trees that had been twisted and shattered by a tornado which had touched down during the storm and passed right between two houses. The normally placid Kolan River was a raging brown torrent carrying away entire trees ... and a very unfortunate number of hapless cows tumbling down from somewhere up river.

Fortunately the river is in a relatively deep gorge, because it keeps rising as the hours go by, reaching heights never seen before. Power is out and neighbors are checking on eachother and helping eachother with any urgent repairs.

The nearest town (and stores), Bundaberg, is twenty kilometers away, across two large rivers. Soon people are saying that the bridge across the Kolan river just upstream, some 60 feet over the normal water level is underwater.

It's a strange sort of slow motion natural disaster. The sun is out and the winds are calm, but the river keeps rising, and from height places you can see large swaths of fields (and the farm houses in them) disappearing under water. By the evening they're saying it's the largest evacuation in Australian history in Bundaberg, that North Bundaberg was about washed off the map -- the roof of the grocery store had even disappeared under water.

Wednesday, with the waters falling John decided to see if he could get across the river. The bridge was by-now clear of water again, and looked fine though thoroughly caked in brown mud. The road was blocked off by the roadhouse, and the roadhouse owner / local volunteer emergency services coordinator was arguing with some people:
"No, I can't let you across mate, it's a liability"
"This is an EMERGENCY! And I need to get across to get medication for my wife!"
"I'm sorry sir but I can't let anyone across that bridge, see where the road is washed out right before it?"
At this point another man pipes in: "I have a backhoe, I'll bring it back here and fill that hole for you right now"
"No, you can't do that, it's a state road, it's gotta be repaired by state contractors..."

Everyone looked up at the sound of someone gunning an engine, and watched a four-wheel drive pickup avoid the road block by going through the nearby avocado orchard, get back on the road, and speed across the bridge and out of sight.


John went into the roadhouse, which had a little shop with basic groceries. He was shocked to find prices marked up 800% or more on everything. There was even expired baby food for exorbitant prices, and pineapples that looked inedibly unripe. Disgusted, he returned home.

On Sunday I drove across the Kolan River bridge myself, it was still very brown, and the destruction around the banks was amazing. The hole in the road had been filled. My friend Brian*, on whose property we have some beehives, told me these and many other stories about the floods on their side of the river. He has a small field of squash and he had brought a large bin of them to the roadhouse and placed them outside with a sign that said "free" to help out everyone stranded by the floods... but within an hour the bin had been brought inside the roadhouse and was being sold for the tremendous profit of the owner.

He did have a heartwarming story though. There was a woman who lived nearby in the forests of Invicta, alone while her husband was out working in the mines in Western Australia. With the phones out, he couldn't get ahold of her, and was naturally extremely worried. So a friend of his rode a quad bike through the storm, more than 20 miles across soggy fields and washed out roads, to go check on her for him.

Natural disasters always bring out the very best ... and sometimes the very worst in people.

*normally I'm opposed to changing people's names, but as he was telling me true stories about real people in the area I figure I better. 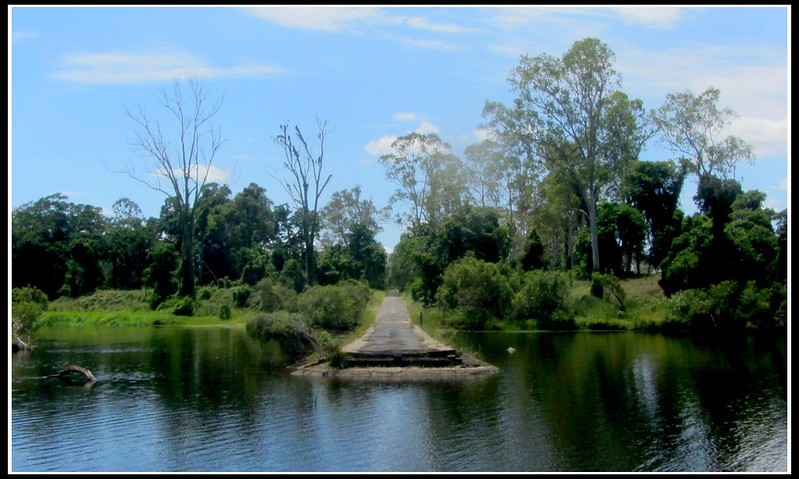 This is "Smith's Crossing" over the Kolan River earlier in the year. The road here washed out some previous year and was never repaired. 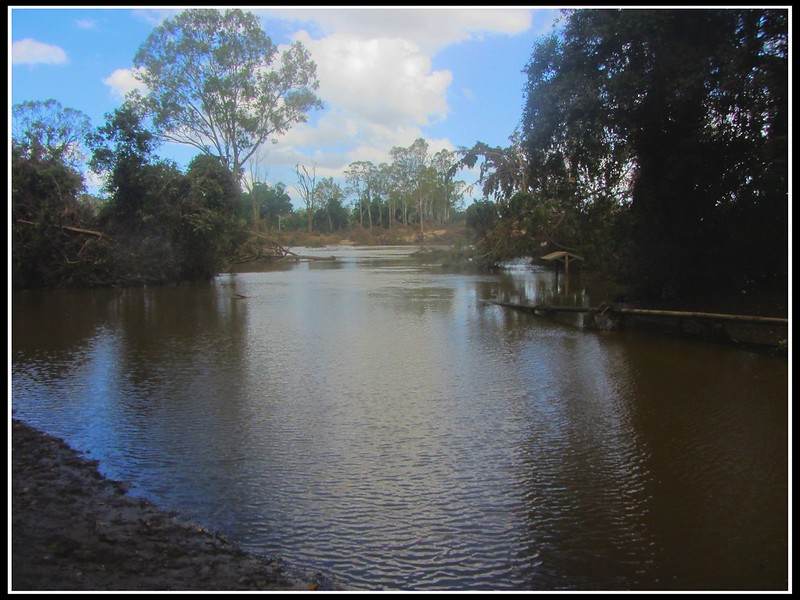 This is the same spot on Sunday -- except where I took the first picture is deep in the water now, probably about where that log is. I don't know what the river topped out at, all I can find on google is a flood warning on Wednesday advising it was at 18.54 meters (60 ft) and falling.
Tags: australia, cyclone ozwald, floods, life in moorepark, lj idol entry, natural disasters, nonfiction
Subscribe