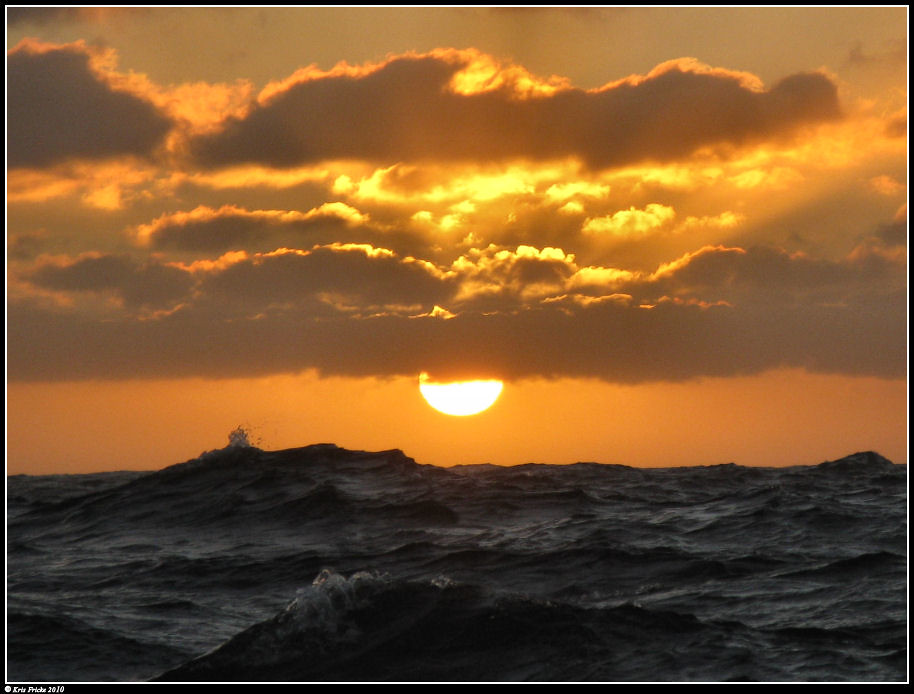 To the west the sun is setting in a glorious display of oranges and reds, but no one pays it any mind. All 14 souls aboard the fishing schooner Kestrel are instead ranged along the higher end of the tilted deck, transfixed on the towering thunderheads to the east. Below the monsterous clouds jagged cracks of lightning flicker and flash in a grey wall of rain. The Kestrel bounds over ominously large rollers, propelled swiftly by the stiff breeze. Coming down hard into the trough between two waves a blast of salt spray douses everyone on deck, but no one flinches.

"I reckon we ain't outrunning that thing" says Zeke, ignoring the water dripping from his face. Jacob turns and squints at the narrow black band on the horizon.
"Aye, I reckon we're four miles out from the nearest shelter," says Jacob, wiping some of the water away from his eyes. "Four miles of that rocky lee shore to stay off of to get there."
At a strange buzzing noise aloft, all eyes turn upward, and soon many a mouth is agape. Accompanied by a distinct humming noise, blue light flickers from the ends of the gaffs and masts.
"What... in ... the ... blazes ... ??!" Thomas Johnson trails off.
"Saint Elmo's Fire," explains the grey-bearded Henry Watson. "I seen it once before, when I was in the South Seas on a whaler. Some say it's electrics. Some say ... it's a portent"
"Portent of what?" asks Jeb. Henry just gazes out at the approaching storm. Jacob anxiously clasps the pendant his wife had given him, a little ship's wheel set in a green stone.


"ALL HANDS TO TAKE IN SAIL!!" The command suddenly jerks them all into action, the fascinating electrical phenomena almost entirely forgotten in a moment. Mad hurry or no, the masts can only take so much strain, and with the wind increasing, Captain Tadger can feel the strain as if it were his own back. "IN OUTTER, INNER, FORE, TWO REEFS IN THE MAIN!" And the mate is among them in a moment sending people scrambling to do the necessary work. The men run without complaint to execute the commands, knowing their lives depend on it.
As a blast of cold rain hits them, the Mate clasps Jacob by the shoulder and says "You and Zeke, I need you to storm-furl the gaff topsail," and then he vanishes into the rain to help hold down the lines known as "widowmakers" on the jibs as they're hauled down.

Jacob and Zeke immediately scramble to the shrouds, which, by way of decaying horizontal "ratlines" forms a relatively taut rope ladder up to the top of the mast. Halfway up, a strong gust of wind pins Jacob for a moment to the shrouds, and then just as quickly the boat crests one of the increasingly large waves and the mast, like a reverse-pendulum up in the sky, swings them outward. The wind howls through the dripping rigging.
The shrouds, while broad at the base, all come together at the small top platform most of the way up the mast, which means they're very narrow near the top. Another gust of wind nearly twists Jacob around the flimsy ladder. He reaches up to pull himself onto the platform (really nothing more than two short horizontal beams to stand on) but nearly loses his grip on the wet wood. The precarious perch tilts and whirls wildly through the wet sky. Very carefully, he gets his arm around the mast above the platform, and hauls himself up. He steps around to the other side to let Zeke up, and together they set about folding in and wrapping up the gaff topsail as tightly as humanly possible. The ever increasing wind blasts and screams around them and fights to pull the canvas out of their hands. The mast groans with every roll and gust. As Jacob finishes the last knot, hanging on to the knot itself for dear life as he ties it, he realizes it is now very dark, the storm having swallowed them into its midst. Suddenly everything is illuminated by lightning that seems to be all around them at once, and the crash of thunder is immediate. In the momentary flash Jacob sees Zeke just below the platform, swinging wildly on his way back down the shrouds. The mast lets out another unearthly groan. As Jacob carefully lets himself down onto the narrow shrouds (keeping both arms firms around the mast as long as possible), the boat swings so far over he is sure he's about to be dipped backwards into the sea. As it comes back up he starts making his way down the shrouds, fighting the centrifugal force that seems to be pushing him in every direction but down. In a flash of lightning he sees the deck below disappear under roiling water as a wave crashes over it.
As Jacob approaches the deck, he begins calculating how he was going to get from the base of the shrouds (which, naturally, run to the rail and actually connect to chain-plates down the side) to somewhere of relative safety without getting swept overboard. Suddenly there is a loud cracking noise somewhere above him and the whole mast quivers and jumps.

A girl named Laura stoops on the beach to pick up a small object. It's not just any green rock -- it appears to have something metal set into it, though its too rusty and corroded to quite make out. There's also a little loop on it as if it could be attached to something. How curious. She pockets it and continues down the beach. 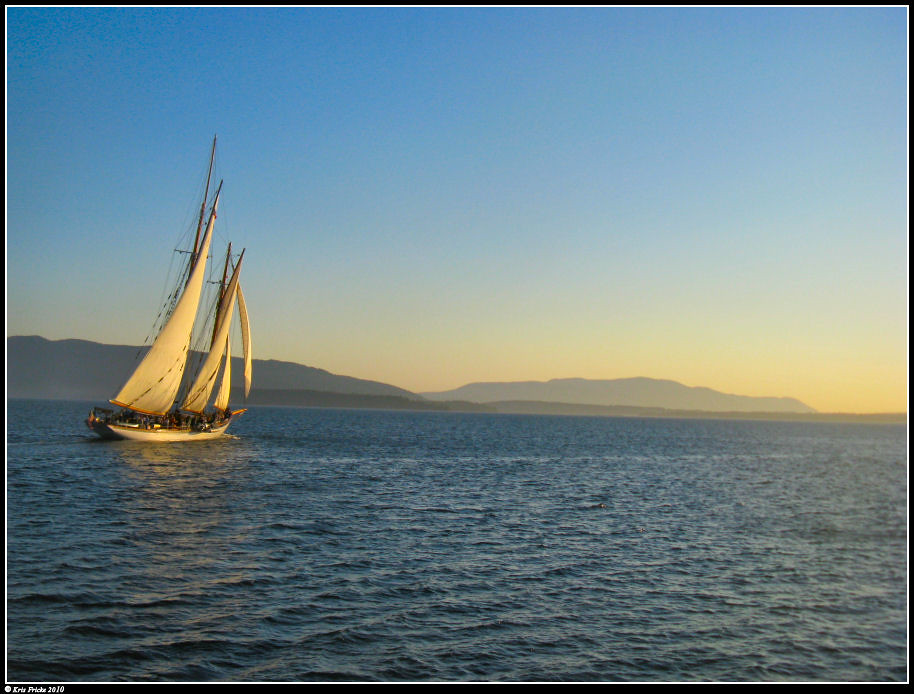 While the above is a fictional story, it's informed by personal experience up furling in a gale, and it's quite the experience. Ever since the Bounty sank last fall with the loss of two hands I've kind of wanted to write about just how insane being in a storm at sea really is, but I don't think I did it justice this time (really). The schooner Zodiac pictured here had her mainmast broken in half a few months after the picture was taken, and I reckon I was furling on the Chieftain in that very storm!

Special thanks to my associate the brilliant sea cook Koriander for many ideas for this entry.
EDIT: Kori has posted her own version! If you liked the story at all I highly recommend you check it out, it's interesting to see how the same story comes out told by someone else! Her version also has many excellent descriptions I'm tempted to pirate off her ;)