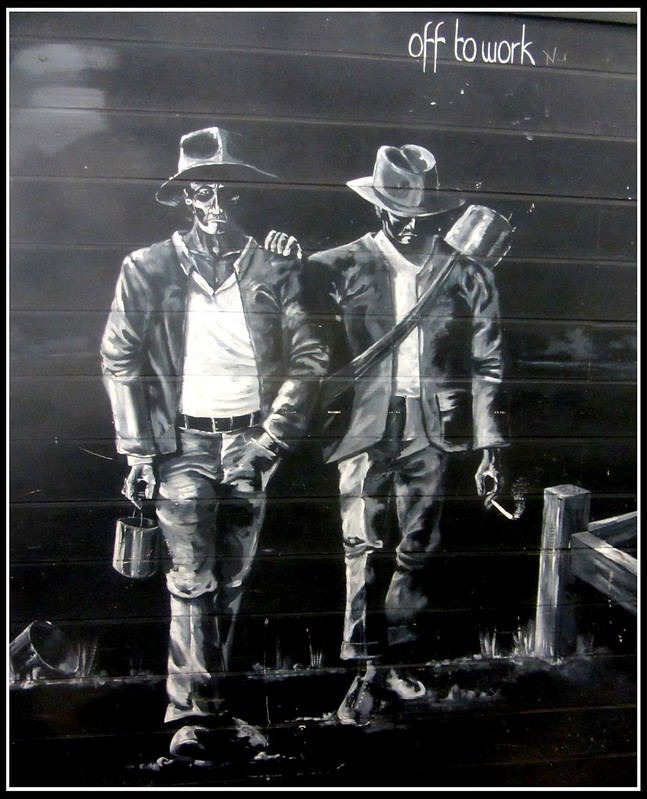 My visa runs out here on August 24th. People from many other countries can easily get a second one, provided they spend at least 88 days slaving away in the agricultural sector, which is the only reason most backpackers ever have any reason to come out here to Bundaberg. They're packed into dismal hostels (some with inspiring names like "Cellblock"), and carted off every morning at 04:30 to spend the day picking vegetables. From what I hear, the supervisors are none to nice, frequently firing people on a whim, sometimes because they god forbid are drinking too much water. By the end of the day they're covered from head to foot in mud, and the only recourse, apparently, is to then drown one's sorrows in "goon" (box wine, which I think is particularly bad here?).

Fortunately I don't have to do that, since I work in the agricultural sector ... I have no excuse but I'm in the Bundaberg area voluntarily. And it wouldn't do me any good anyway, since Australia apparently hates Americans, we aren't eligible for second year working holiday visas.
Okay I think it's all just reciprocal, and we don't get them because the US doesn't grant them. I don't think we even grant one year working holiday visas?

Don't get me wrong, there's some very nice locals here. I always enjoy talking to the kid that runs the food kiosk, Andrew at the hardware, or Sean at what I like to call the "prawn shop" (real name, the dreadfully dull "Moore Park Rocks." I like to get prawns there). And I cherish my conversations with the workplace health and safety inspector. BUT, even the locals admit that there's a lot of bogans out here. You might call them rednecks in the states. People missing teeth, with tattoos on their face, long ratty hair that doesn't look like its been washed in a month ... and somehow it seems a lot of the supervisors the backpackers work for fit into this category.

My visa only allows me to work for one place for 6 months, so I'd get termed out here at the beginning of May -- June if you subtract the month of April which I'll be spending in Africa.
My boss has mentioned that he'd sponsor me, and then I could stay on here much longer. He also mentioned they probably don't check up on the six month thing. Both of these comments were presumably peppered with colourful vulgar analogies to body parts, knowing him.
This job certainly has its pluses -- it pays well, I make my own hours, and generally no one's telling me what to do; but I'm also wondering if its time to move on.

I informed the boss that I was going to be going to Africa for a month. I wasn't sure how he'd take it, but he seemed more interested at the time in interrogating me as to whether I was, as he suspected, neglecting to spray an insecticide that's harmful to bees into hives to fight a problem they don't have. His suspicions are well founded, but don't tell him that.

I applied for a job in the states. I'm sure I've been jinxing it up and down by mentioning it a lot. I'm excited about it. I've been putting off changing the flight to the States until I knew when they were doing in-person interviews for it in California. I found out this morning it's "the first two weeks of May" -- which oh so fortunately does not conflict with my projects in Africa. Presumably some time this week the phone interview will happen and I'll find out if they're even interested at all in meeting with me, but I don't have time to further delay changing the flight. Deadlines are coming together here like the climax of a movie. Do I hold out another day and maybe save myself several hundred dollars in changing flights around, do I book it for early May not knowing if I'll have any reason to travel at that point (and if not, will needlessly have to change it again somewhere in the mix of this tight schedule and running around Africa).

And on top of all that, this week I'm running around putting down (ie euthanizing) dozens of beehives that have the incurable disease of foulbrood. It's a disgusting disease that turns pupae into a brown gooey booger-like substance and makes a whole hive smell like a garbage can. And its so contagious that I have to treat every bit of equipment that touches an infected hive as if it too is infected, and have to make sure healthy bees never get a chance to "rob out" an infected one I've killed off. I haven't been this stressed since college.