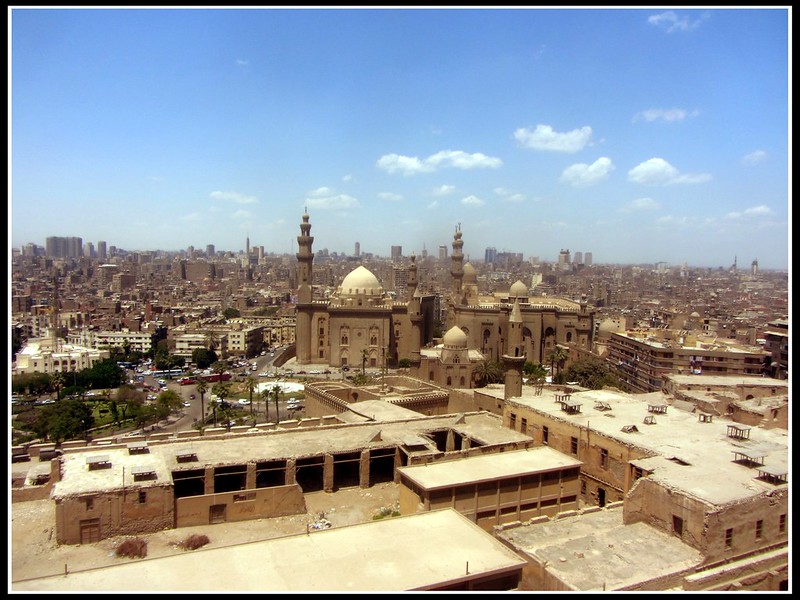 Alright well now the Egypt update is so overdue I'm sure none of you recall the last one, wherein I arrived in Egypt and promptly caused an international incident. And moreover, soon I won't recall enough details to write an interesting entry about it!

Sunday, April 21st
Sunday, being the first day of the work week in Egypt, we were finally able to get to work! At 0700 Husam (the ACDI "program assistant,") and Mohammed (the driver) picked me up to drive several hours south to the city of Minya.
Once we got out of the traffic and forest of high rises that is Cairo, the land around the highway became a flat barren moonscape. I soon fell asleep.

When I awoke our surroundings seemed like something out of a science fiction movie. The land all around us was all dug up, there were great mounds of snowy white gravel/sand, and large construction vehicles lumbered like great beasts in and out of billowing clouds of white dust. apparently it was lime mines. It went on for miles, and unfortunately I never really got a good picture that could do it any justice at all.

Suddenly, however, we descended a short slope into the Nile valley (we'd been traveling south parallel to it but not in the valley itself), and our surroundings suddenly changed from otherwordly lime mines to green agricultural frields.
Minya, population 256,732, is called the "Gateway to Upper Egypt" since it is located at the approximate border (I don't think there's anything definitive that defines the border) between northern Lower Egypt and southern Upper Egypt. I find it surprising how innately one assumes "up is north" and how often one gets a confused for a moment here and there talking about going south to Upper Egypt.
Minya, like all Egyptian towns, cities, and villages I've seen is dominated by very home-made looking red brick high rises. They're often left looking "unfinished" since the family just builds a new floor when the new generation needs somewhere to live, and also they say there's a tax on finished buildings. And it is, of course, built right on the Nile.
Minya (also transliterated as Minia) is also notable for being very close to the ruins of the ancient city of Akhetaten, built by the father of Tutankhamen. Akhetaten was founded by said father (Akhenaten) in 1353 BC and abandoned by his son, so it was really only in use for a generation. Nothing was built over the city remains and so when modern archeologists examined it they were able to find, for example, the official sculptor's house, complete with a number of half finished or undelivered sculptures in the store rooms. Here they found the famous bust of Nefertiti (the founder's beloved "chief wife"), of which large reproductions can be found proudly erected in traffic circles and squares throughout Minya. Also of note, the art of the Akhenaten era is very distinct and interesting.
I find, despite my general strong interest in history, I've never really delved terribly much into Egyptian history -- I suspect because there's just SO MUCH recorded history there that it's entirely overwhelming to try to wrap one's mind around. But I found it quite fascinating and enjoyable to read about the ancient history pertaining to a place while I was actually there.

That first day there we went to Minya University and met with Dr Adel there, the head of the apiculture department (?). I had a good talk with him, and he took us around introduced many other professors, showed us the university bee yard and we looked at some of the hives. Then we went to the horticulture department, where they had 15 acres of flowerbeds, mostly in the dappled shade of large trees, and some of the staff from that department took us around and showed me which Egyptian plants are good for bees. There was an outdoor "classroom" in the middle of this, 30-40 student chairs under a canopy of palm fronds, surrounded by the peaceful shade of the trees and flowerbeds -- it seemed to me a very pleasant place to have a class!
It was very interesting and useful because usually I go to another country and have no idea what flowers are good for bees in the area except for what the beekeepers I meet with tell me, so it was good to start with an education in local flora. 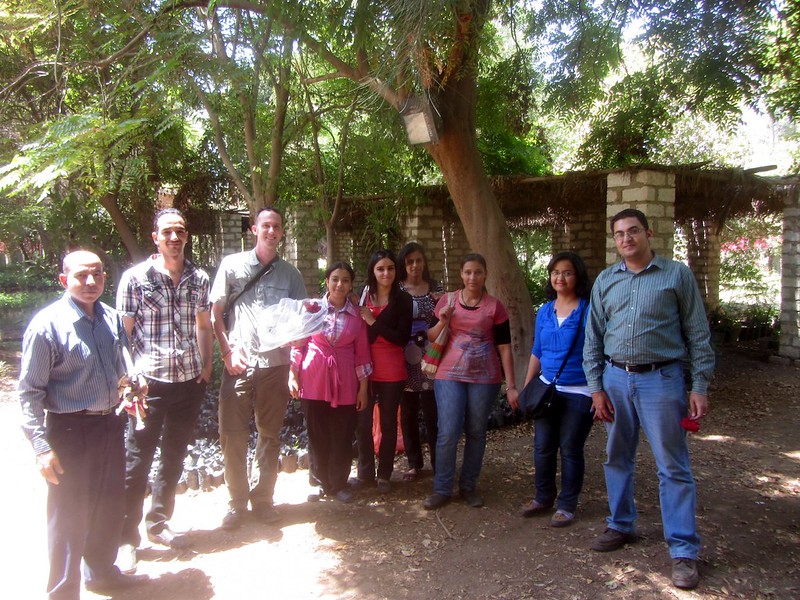 Another interesting cultural thing: in one of the central intersections in the university there were young men on the corners holding big signs. We often had people protesting things at UC Davis, typical college campus behavior. I asked what the signs said, and was informed they were urging women to cover up.
Incidentally, there were no women participating in their protest.


In the evening (at like 9 or 10? Late by U.S. standards) Mohammed and Husam and I went out for coffee/tea and to smoke the water-pipe. I had fenugreek "tea" (I'm not sure it's technically tea but fenugreek in hot water anyway), which tastes like a licorice tea. Quite nice. Also got to know Husam and Mohammed better. Husam is a little younger than me but married with kids. Mohammed is older, with kids in their twenties. His daughter is engaged, I asked if he liked his future son-in-law and they both laughed and Husam said "this is Egypt! If he didn't, it wouldn't happen!"
Mohammed speaks English alright but doesn't talk terribly much usually. I was very amused when I asked him if he had any pets and a big smile came to his face as he told me about his cat. 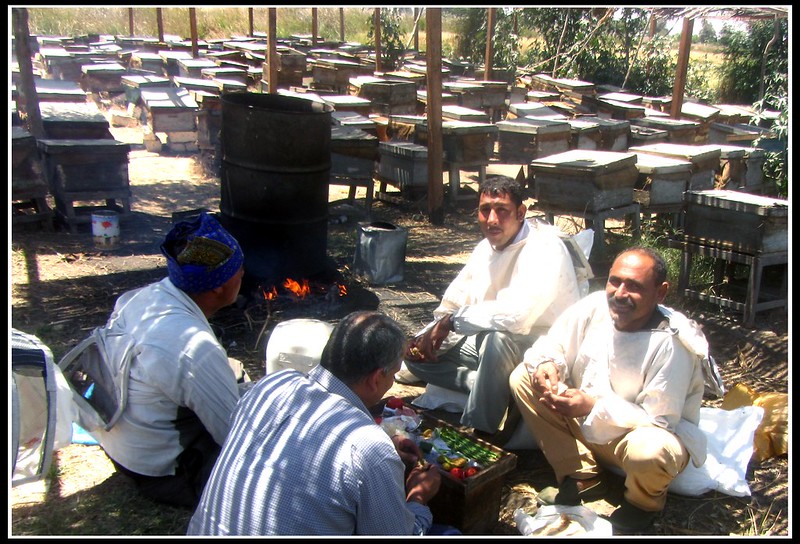 The next day (Monday we visited a beekeeper who keeps 500 hives and only uses them to harvest bee venom. We also visited a number of other bee yards, and at one of them the beekeepers were presently having lunch (pictured above) so they invited me to join them. It was falafels in flat bread with some other things... and this really salty pickled cheese... I didn't terribly care for the pickled cheese though. They also made an extremely strong tea on a little stove and appeared to be expecting me to find it too strong to be palatable ... but they don't know me very well ;)
Also at this yard we found a scorpion in a beehive. From the way everyone backed away I guess you don't want to be stung by one.

Tuesday I made a presentation to Dr Adel's undergraduate apiculture class about comparative beekeeping in America/Australia/Nigeria/Ethiopia. We also visited an agricultural high school, which had a beekeeping department, and had some interesting questions and answers with the staff there. I'm always interested to hear the ways they do things in other places, and in this case they were telling me they had a cure for the "incurable" (by Western science) bee disease of "American Foulbrood." 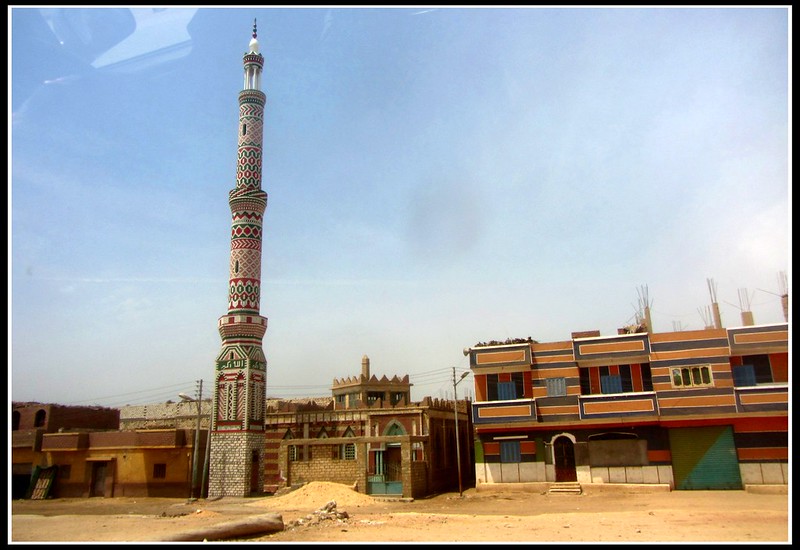 Wednesday was Q & A with the Minya Beekeepers Association. Husam calls these "seminars," but I don't really feel this is proper usage of that word. Typically they ask me questions and I answer them. In Egypt they're not interested in the basic simple things though and typically ask questions about strange occurrences I can't explain, so it's a bit of a pickle. Dr Adel was my interpreter here and he was enlarging upon some of my answers, which I entirely appreciate, we're here to educate the beekeepers after all, but apparently Husam actually took him outside for a moment and chastised him for doing so.

After that we drove home to Cairo. I stayed awake most of the time this time but didn't see the lime fields again, I guess we took a different route.
This being Egypt, one would just randomly see giant pyramids going by in the distance:

Apparently it is the Meidum pyramid. It's unusual appearance is because it was built first as a step pyramid, but sometime later someone wanted to turn it into a "true" pyramid and fill in the steps, but for various reasons (see article) it collapsed during construction and work on it was then abandoned.

Thursday was to be a holiday so this workweek was only four days, meaning by the end of the weekeend I'd have worked four days and been off five while in Egypt, a circumstance I found entirely displeasing. Anyway, I'll save the rest for another entry I suppose!


Next: Weekend in Cairo!