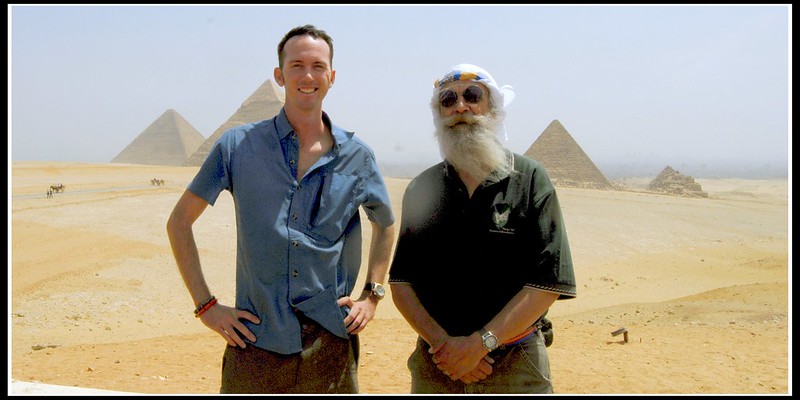 Pictured, I travel back in time from the future to stand by myself at the pyramids. Yeah apparently I get a lot shorter.

After the first week in Minya I returned to Cairo for the three day weekend. This time, unfortunately, the Organization already had three volunteers in their guest house so I had to stay in a nearby hotel. I believe the volunteers invited me over on Wed evening though so I was able to hang out over there anyway -- the guest house being much more comfortable than the hotel room, and the other volunteers being good company.
Last week I had met Dr Ross (tomatoes), Ms Bergau (an American handycrafts expert who has lived near Bali for the past few decades), & Dr Campbell (pictured above, a potato expert from Alaska). I found Dr Campbell particularly amusing (I mean just look at that guy, you can tell he's a hoot!). This week only Dr Campbell was still there, and the other two occupants were Dr Gillette (citris integrated pest management (IPM)) & Dr Sullivan (tomatoes). Apparently the reason for all the tomato experts is that Heinz has been funding a lot of development. And Land O Lakes (the US dairy consortium) is another one of the biggest agriculture development agencies. Who would have thought that these big US corporations would be doing all this development work and not even trumpeting all about it in PR campaigns? 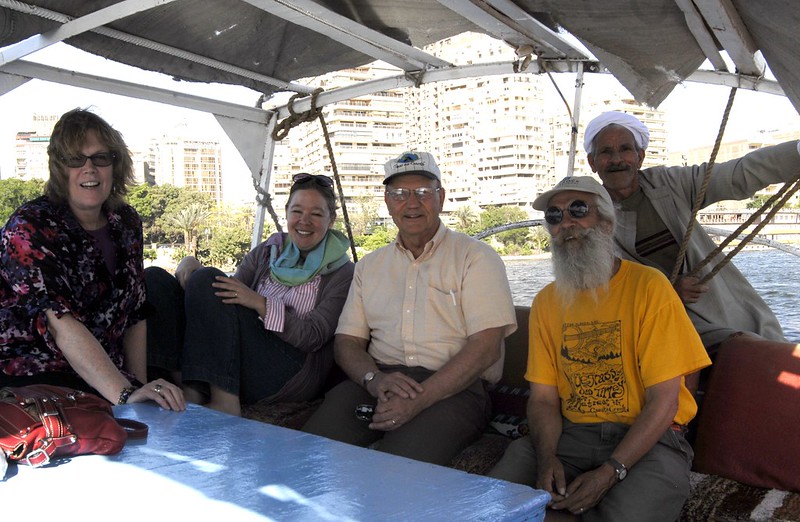 So Wed evening, for example, I probably stayed at the guest house till 11 and then started walking in the general direction of my hotel (only about half a mile away) and flagged down a taxi when I got a chance. I'm telling you this mundane detail because a lot of people say to me "oh I'd love to go to Egypt but is it safe???" Well, I feel perfectly fine walking across Cairo in the middle of the night, and I wouldn't do that in Los Angeles. I'm sure there are bad parts of town but by and large there's still a lot of people out at that hour so there's always people about -- just don't be an idiot and go into a dark smelly alley full of ruffians.
Though admittedly every night there were sporadic bursts of what were either fireworks or gunshots.

Thursday, April 25th
Thursday morning, Husam from The Organization had arranged a tourguide and vehicle for us, so we all climbed aboard the minivan and headed to the pyramids at Giza. Tourism is down something like 90% since I was last here in 2009, and you could really tell the crowds were very thin. There were actually fewer of the really irritating persistent peddlers who follow you around trying to sell you worthless nicknacks, since the ecosystem simply doesn't support very many of them any more -- BUT the tourism police can no longer keep them in line.
One can still see the police there, all huddled together in one place, and I'm informed they do still have authority and power on the grounds, but if they piss off the peddlers something will happen to them on their way home, so they don't do anything. 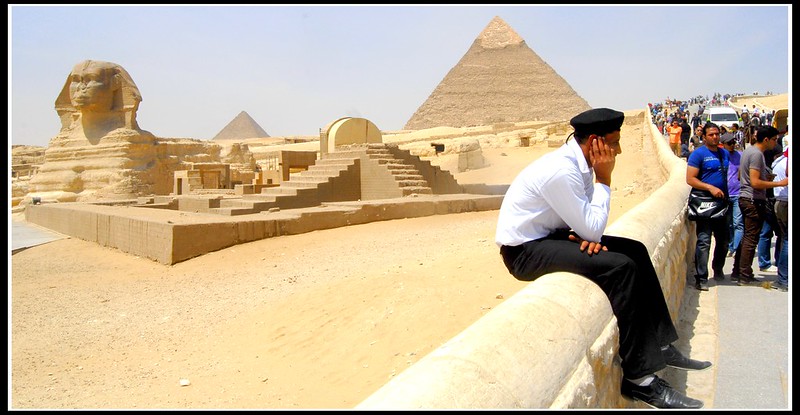 Interesting fact about the Sphinx, it is sitting there staring intently directly at a pizza hut & KFC. ;D

What I was by far the most excited about though was the "solar boat museum" -- Several entire boats had been buried beside the largest pyramid, and one of these was found to be remarkably well preserved (seriously look at these original ropes), and was reconstructed and put in its own little museum.
Part of the reason I was most excited about this was that I'm not sure the museum existed when I was last there. Or if it did I didn't see it, which is plausible since it's kind of hidden behind the pyramid. The other reason of course is that I'm a big fan of old boats in general. 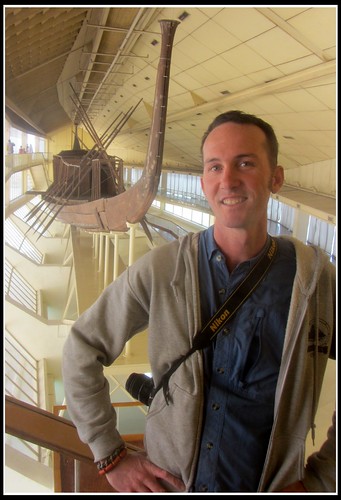 From there we proceeded to Saqqara, an area about 30 km south of Cairo with many more pyramids (and some of the oldest I believe). This was another place I hadn't visited last time and it was very interesting. Lot's of... really deep pits in the ground. From Saqqara you can see the pyramids at Giza in the north and you can see another cluster of them further south, altogether I think you can see sometihng like 13 pyramids from there! Egypt!

Just a typical scene at any given point in Egypt ;)

Friday, April 26th
Friday the gang got back together and we went sailing on the Nile for about an hour in the late afternoon. Without a prior booking we went to a dock and haggled the boatman there from 80 LE to 70 ($10), to take all of us out for an hour. That's not per person, but altogether! Coming from Australia where $10 won't get you across the street I was particularly pleased with the shocking affordability of this. 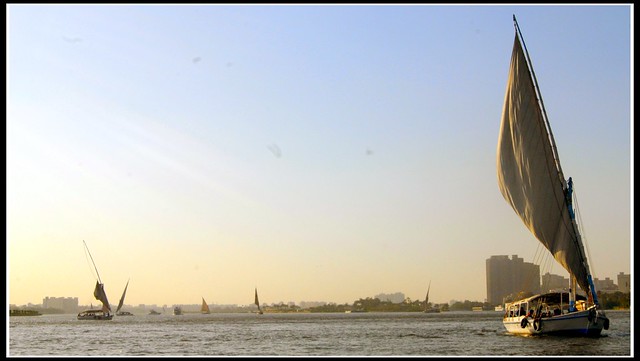 There followed a sumptuous feast at the "Fish Market" restaurant: 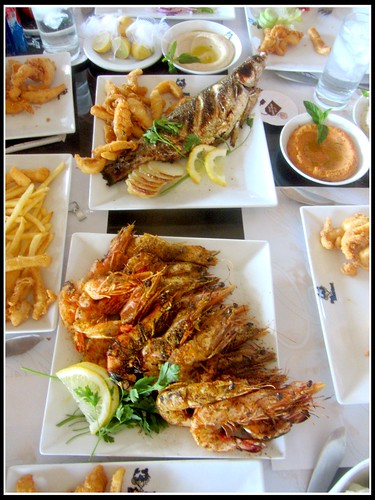 (take note: it is on the Nile in the Maadi neighbourhood, if you're ever, you know, in the area ;) )

Saturday, April 27th
We spent several hours in the Egyptian Museum. It's really overstuffed with things, and a large part of the middle area actually has stacks of closed storage boxes. I came across an article the other day about how an "important find" had recently made ... among stuff already in storage. It's not hard to believe. Also there's nothing preventing grimy tourists from rubbing their filthy hands all over all these priceless artifacts. Definitely not the most modern museum. I hear there's been a new one in the works for many years but construction has been stalled since the revolution.
Not that it isn't fascinating though -- there's an astounding number of all kinds of amazing ancient artifacts there.

From there we drove through the cemetery city (where people actually live among the graves) and "garbage city" where all the Christians live. Apparently they face substantial discrimination and garbage collection is one of the few jobs open to them, so they ended up doing all the garbage collection and processing for Cairo, right in and around where they live.
Also there's a fairly impressive cave church there. I was a bit disappointed because I was expecting an ancient cave church but it appears to be a thoroughly modern cave church. But it sure is in a cave!
You may or may not recall that when the "swine flu" was going around the Egyptian government ordered all the pigs killed, out of an irrational fear they could spread it (they can't). But only Christians had pigs so the government wasn't too concerned about the repercussions of killing all the pigs. Since pigs eating teh garbage had been an important part of the trash collection process in the city though, they found the unexpected consequence to be that garbage started to pile up.
Well, I was informed many of the pigs actually survived, people just brought them into their apartments until the whole thing blew over!

And I guess I'll do the second week in another entry!