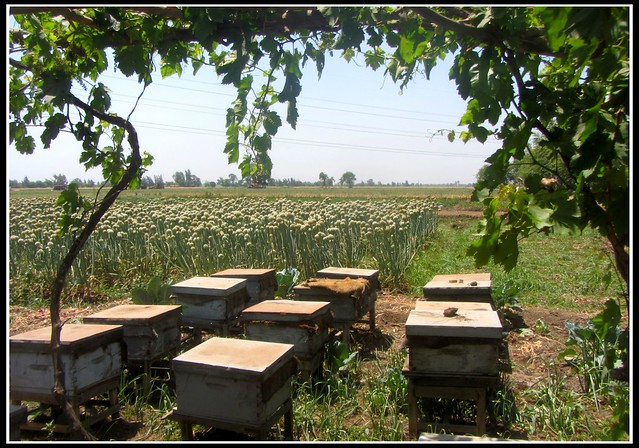 Continuing the Egypt adventures, after the weekend in Cairo we headed north to Alexandria. Along the drive I noticed numerous strange conical towers atop buildings -- was informed they are pidgeon towers. The pidgeons are raised for food.

Sunday, April 28th
We stopped in a village near Alexandria, where there were banners heralding my arrival hanging from prominent places (okay so my name is spelled wrong and kind lost in the information on the banner..). There we met up with a local beekeeping family and visited their bee yards with them. The beekeepers consisted of a grandfatherly fellow (who I believe started the operation, though it's possible he learned from his father), his son - a middle aged fellow, and HIS son (around 18). It was fun to see three generations of beekeepers working side by side.
The beekeeping family then invited us (the driver, Husam from The Organization & I) to a sumptuous home cooked dinner at their place. I must say though, I found it significant that they never introduced the wife who presumably prepared it all, and she did her best to keep out of sight.

Like most of my interactions in Egypt, all the talking was done in Arabic with Husam translating things to me. Unfortunately though, often the conversation would run away without translations, with only the occasional update from Husam of "we're talking about politics again" (from what I can gather, everyone complains about the Muslim Brotherhood, says that no one wanted them but they were the most organized and so did the best in the elections)
After we left this friendly family and their village Husam informed me "they invited us to stay the night there but, you know, we have a hotel booked already!" ...personally though I would have really loved to stay with the family, I think it would have been a really fun and nice experience. 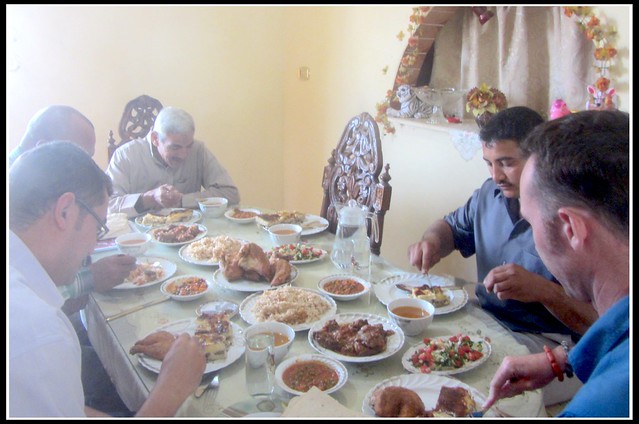 Monday, April 29th
Monday we went to the University of Alexandria, met the local entomology/apiculture faculty and made a presentation for mixed group of very experienced beekeepers and people with PhDs related to beekeeping. Tough crowd! Was relieved to find that this group of beekeepers DOES actually believe in putting multiple boxes on their hives. 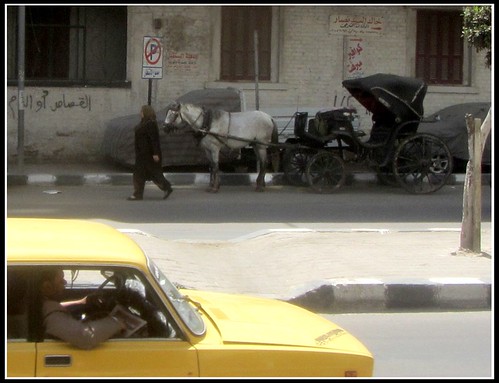 Not only does this horse-and-buggy appear to provide regular transportation to locals (ie not a tourist novelty), but you can see it's parked in a no parking zone, LIKE A BOSS

Tuesday - Wednesday, April 30th - May 1st
From Alexandria (in kind of the western corner of the Nile Delta) we headed to Tanta in the middle of the Delta. In Tanta we visited several more beekeeping operations and several beekeeping supply and honey stores, as well as a honey processing facility and a wax processing facility. Tanta appears to be a major center of beekeeping in Egypt. Someone described how every year there are more beekeepers because they see their neighbors doing so well at it -- but then a lot discover its not all easy money and give it up after a year. Still though they said in one village something like a quarter of the population is engaged in beekeeping!
Also there appear to be two beekeeping associations in Tanta which have somewhat a rivalry with eachother ... which I find hilariously reminiscent of the fact that here in California there's the Orange County Beekeeper's Association and the Beekeeper's Association of Orange County, and they hate eachother.

Tuesday morning Husam informed me that the previous evening some of the people from one of the organizations had invited us out but Husam had once again declined on my behalf...
Fortunately we were able to catch up with them Wednesday evening, with another sumptuous meal (at a surprisingly nice restaurant in Tanta), and then later that evening coffee with people from the other organization (from 10pm to midnight). 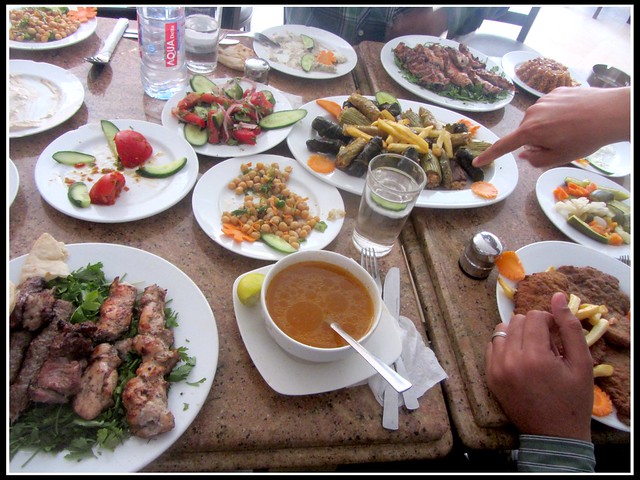 Chicken and beef kebab on the left, bird tongue soup, hand pointing at various things wrapped in cabbage, some breaded-and-hammered meat on the right.

Thursday, May 2nd
Presentation for the Arab Beekeeper's Union. This time there was sort of a panel of us, me and two PhDs. Husam had been doing his best to freak me out all week I think by saying "there's people coming all the way from Kuwait for this talk!" and "they'll really be expecting something really impressive you know!" And I have to admit he had me a bit concerned. I don't think I'm really entertaining enough to warrant coming from Kuwait to hear. As it turns out I did talk to two people there who were visiting from Kuwait. But altogether it wasn't nearly as painful as I had been psyched out into expecting.
After this we drove back to Cairo

Once again I was officially ensconced at the Maadi Hotel but ended up hanging out with the other volunteers at the Guest House.
It so happens that a dear friend of mine, my friend Asli and her brother Josh was due to come in to the Cairo airport that night. We've been friends for some 3 or 4 years since we met in on flickr due to our mutual interest in maritime and photography -- she's a Turkish merchant marine officer. She happened to have just finished a term at the Istanbul maritime academy (to upgrade her license from 5000 ton to unlimited and get on the largest oceaongoing vessels) and had never come to Egypt as a tourist. Was originally planning on coming a week earlier but her visa was held up until the very last minute, so we'd only actually overlap in Egypt for 12 hours.
Husam was good enough to arrange a taxi for me (presumably a friend of his, same guy we always got when he arranged a taxi for us), but then when I met up with the other volunteers I learned that two of them were departing the guesthouse at the exact same time I would be (midnight) to head to the airport. I called Husam and asked if I could just go with them but he said since I wasn't going on official business they couldn't be liable for me....

Friday, May 3rd
So at midnight both our taxis showed up to take both groups of us to the airport (which is like 40 min away).
Picked them up without incident and then we got an early start the next morning. We walked from the Maadi Hotel to the neighbourhood of the guesthouse looking for breakfast -- but since Friday is a holy day most places weren't open. After only getting mildly lost though we made it to the guest house and had breakfast at one of the nearby restaurants I was familiar with.
From there we went back to where I had gone sailing on the Nile the previous weekend and we booked a felucca again. Sailed around and we all three took numerous more pictures (all three of us armed with DSLRs!)
Then we decided to go see if we could find some beers somewhere. I took them right back to that fantastic seafood restaurant that was beside the felucca dock, but they didn't serve alcohol there. There was a TGI Fridays next door, and though I would normally never go to an American chain while visiting an exotic place, I figured they were probably our best bet for some place that served alcohol ...
NO DICE! No alcohol to be had there either! But we were running out of time so we ate there anyway.

And then it was 14:00 and I had to head to the airport. Mohammed, the Organization's driver, said it was okay for Asli and her brother to come with us, and in fact at the airport even said he'd wait while they walked with me as far as they could. And then even drove them all the way to their hotel (about half an hour further away than mine -- in Giza). And even invited them to come have dinner with his family the next day. What a really swell fellow! 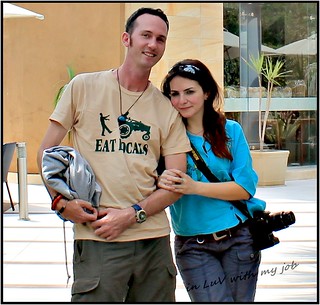 Saturday, May 4th
Arrived in Dubai around midnight. Checked in to the same in-terminal hotel with the same check-in clerk as before, who recognized me. Funny to have people who recognize me in Dubai, which really is pretty much the opposite side of the world from home. So much so that...
...we flew almost directly over the North Pole on the flight from Dubai to LA. Nonstop, 15 hours. Due north and then due south. Flew north over Iran, Turkmenistan, Kazahkstan (where I noted it was 2:15pm May 4th, the exact same date and time I was scheduled to land in LAX many hours later), Russia... literally so close to the north pole that the little airplane icon on the map covered the north pole dot (that's as exact as I can get, damn thing tells you useless facts like the outside air temp but not your lat/long!), and then down through Canada, Washington, Oregon, California...

Mom picked me up at LAX, think we got out of there around 3pm. Two hours or so to get to my parents' house, western bacon cheeseburger from carl's jr (OH HOW I MISSED YOU SO!!), stop by a phone place to get a phone that works in the States (got my old number back), dumped out my back, re-packed my bag to head out the next morning, and hit the sack! Altogether had been something like a 33 hour day! (and eight months since I'd been home!) 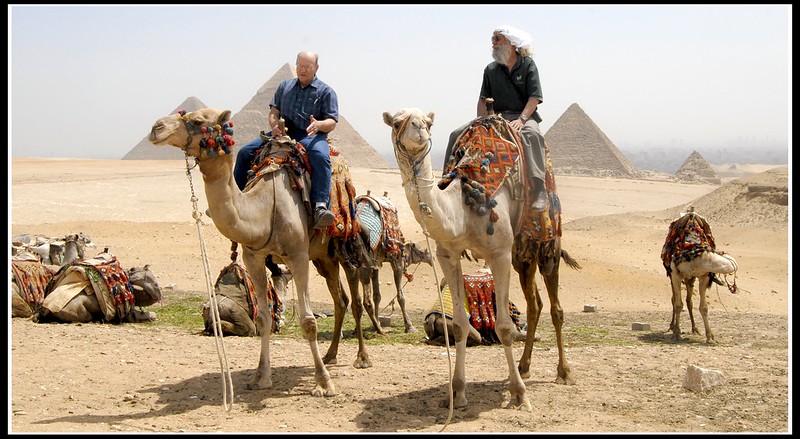 The very next day the next adventure began, but that's another entry!


See also:
All my Egypt Pictures