Turkey III Part 1 - There and Back Again 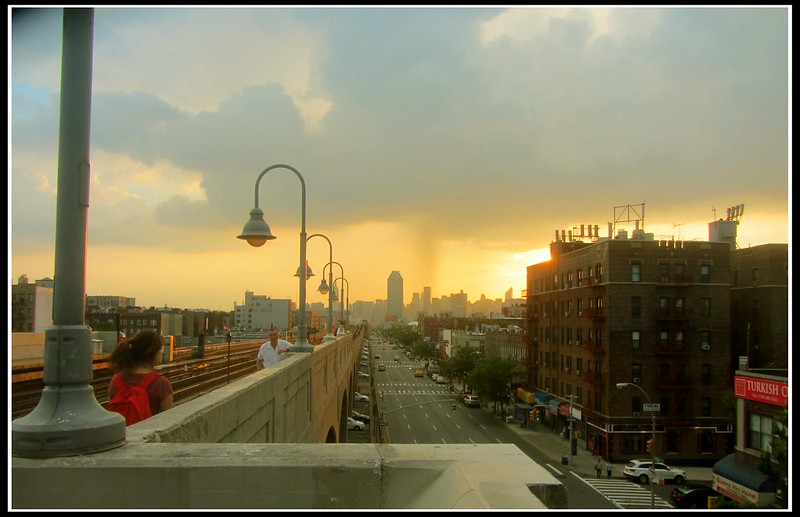 Picking up right where we left off, I left Istanbul on July 5th and flew to New York. I had barely departed before Asli and I started to contemplate that really there was no reason I shouldn't've stayed longer, as I didn't have anywhere else a I particularly urgently needed to be.

In the mean time, though, I adventured in New York City for a few days with the legendary

teaberryblue ("Tea Berry Blue" if anyone is actually coming here from the facebook link)(heroic champion of many a facebook poke war) (pictured above: the awesome view of the city from her "subway" stop). Among other things we visited the "PS1" Museum of Modern Art, which was really neat, and the Industry City Distiller, which uses some really innovative processes to produce a better product on a shoestring budget than most large scale distilleries.

Monday, August 5th
After returning to California though, I found I seemed to have left my heart among the sunny sunflower fields of Turkey, however, and plans for a return were soon in the works. Almost exactly a month after leaving, I was on my way back again, this time Asli and I looked forward to spending a whole month together.

This time the cheapest flight ($1,253.42 round trip) was on aeroflot, via Moscow. Interesting facts: aeroflot doesn't serve ginger ale, but they're really on top of going up and down the aisles with a samovar of hot tea.

The first two weeks we didn't have terribly many exciting adventures, since we were seeing this as less a vacation and more just being together. She had classes every day on any account, and was nearing the end of the the last term at academy to get her unlimited (the biggest of ships) mate license. I was mainly studying for the GRE myself.
On the weekend we did take the bus to Izmit, where her dad lives. He is an excellent cook and prepared some delicious food, such as this menemen: 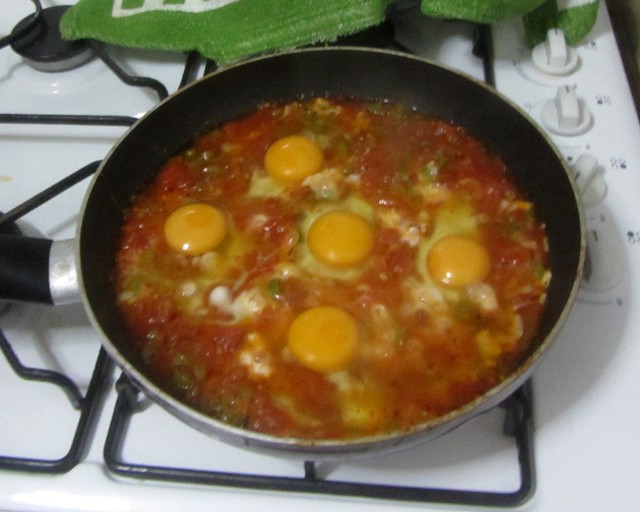 Friday, August 16th
After the second week, Asli was in her final week of academy and had lots of studying to do and was planning on a marathon of study sessions with her classmates, so it was decided that I would go out adventuring on my own.
I moved into a hostel just a biscuit toss from the Hagia Sophia in old town (Sultanahmet). One thing I noticed immediately, which would be true throughout my travels in Turkey, is that the hostels seemed to have a lot of interesting people traveling by themselves -- which greatly facilitated making friends. I met a french engineer currently living in Vienna, a fellow who works for IMDB (that's THE IMDB, the internet movie database!) in Seattle (did you know everyone there takes several days every month just to watch movies? and get paid for it??), an Asian Canadian photojournalist currently residing in Denmark, and an Australian girl who just graduated uni, and we all went out as a group.
Having been in town awhile already, I acted a bit as a tour guide, taking my new friends to all the must-see places. On a few occasions I had to translate the Australian girl's slang into "normal english" for the others. (:
We all had kokoreç from one of the many places selling it -- lamb or goat offal wrapped in intestines (kind of like haggis?). It was.. kind of greasy. 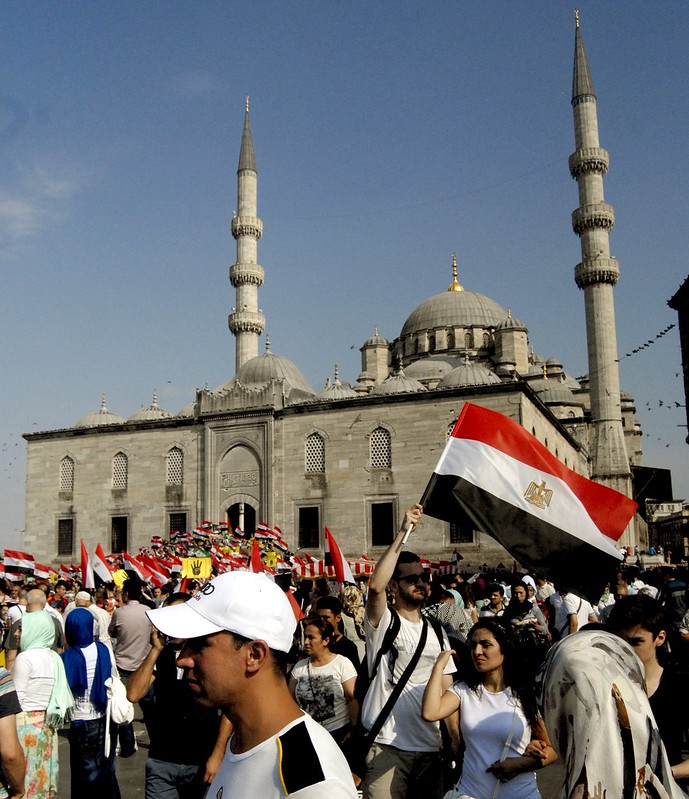 Outside the New Mosque (opened 1665) there was a big rally for Egypt, since the Muslim Brotherhood had just been overthrown there and Cairo was in a pretty high state of unrest.

As you may know there'd also been persistent riots in Turkey, in the area of Taksim Square. It had been awhile since the worst of it, but I was curious if anything was still afoot. Its supposed to be worst on Saturday nights, so Saturday evening I headed to the famous Taksim Square: 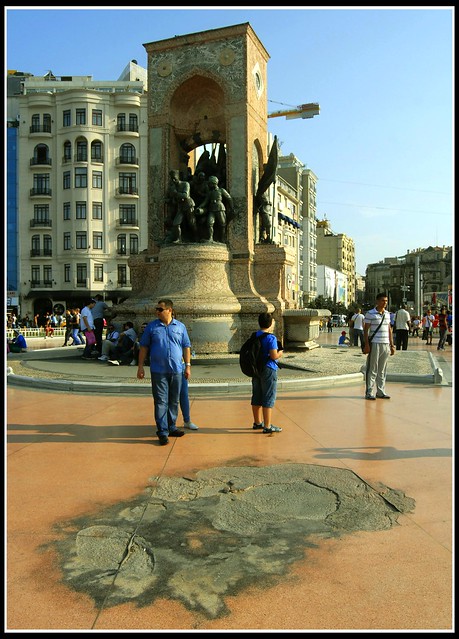 I assume this sidewalk damage is from the riots. Other than a fairly large number of riot police standing by / lounging about in the grass of Gezi Park, Taksim Square seemed pretty orderly, though I left by 7pm which may have been too early. Gezi Park itself, which sparked the riots when the government tried to demolish it to build a shopping center, is quite lovely.

Istiklal street, the pedestrian-only street that stretches towards old town from Taksim (and is lined with mainly high end shops) was packed with people enjoying the warm summer evening. In a few places very talented musicians played for tips. About halfway down the street I found a large number of young people who appeared to be holding a vigil for those killed in the Taksim Square riots, and just beside them was another contingent of riot police: 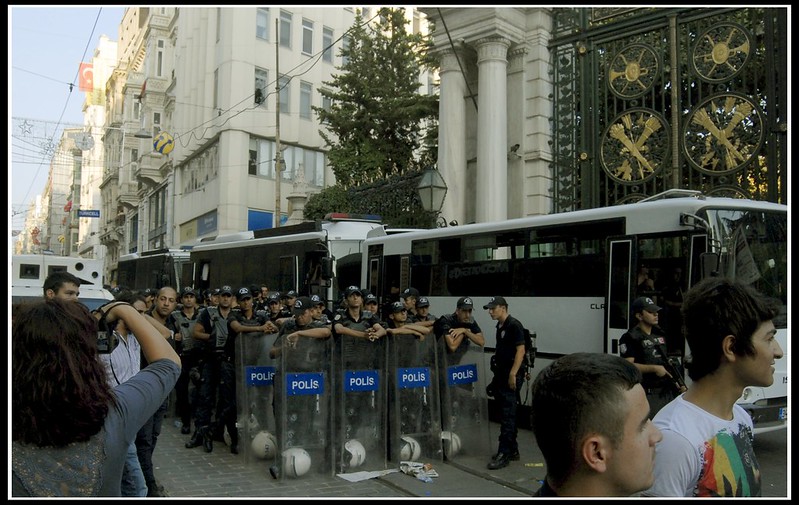 On Monday morning I bought a bus ticket to Cappadocia and then to kill some time I took the light rail to the Topkapi stop because the sign said "Museum of 1453", though I hadn't been able to find any reference to such a museum in any of the guide books. I had to know what this mysterious museum was! 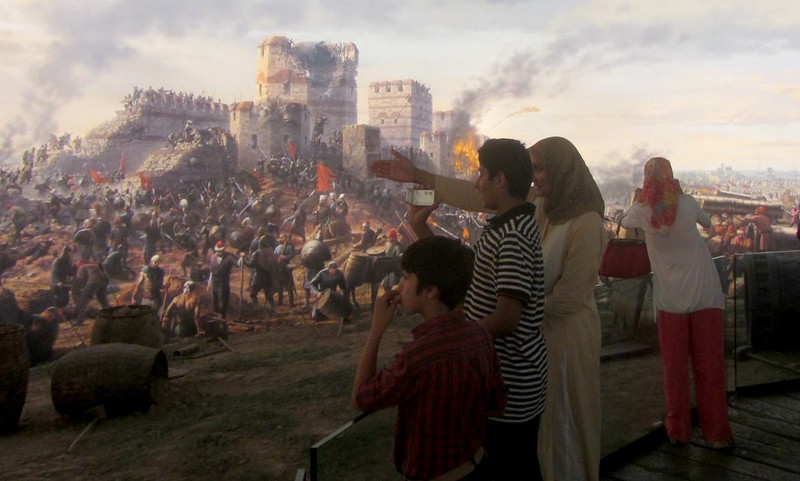 Well 1453 is of course the year the Ottomans captured Constantinople, and as you can see, there were tourists there!
The "Museum of 1453" is apparently brand spanking new, which is why it isn't in the guide books, and in addition to a bunch of informational signs about the conquest (written in Turkish, and the english-language audio-tour just tells you the vague gist of what each sign says, which is rather irritating), the museum has a giant diorama/panorama room, that you enter through stairs in the floor to give you an uninterrupted 360 degree view of the battle. What's kind of neat is the museum is in the exact place the panorama puts you in, so when you exit the museum the massive walls of Contantinople are right there where they were in the panorama, still looking impressive. They're still mainly intact, though a major roadway cuts through them near there.

That afternoon I caught one of the little shuttle buses to the main autogar (bus Terminal). The Istanbul autogar is like being in the cavernous lower levels of some dystopian metropolis. Or perhaps a giant parking structure, that actually has free standing buildings in it that don't even touch the roof above. And you can walk for hundreds of yards from one bus line's station to another without leaving the grimy subterranean gloom. I was soon whisked away, however, on one of the many luxurious cross-country buses for the overnight transit to Cappadocia, central Turkey. 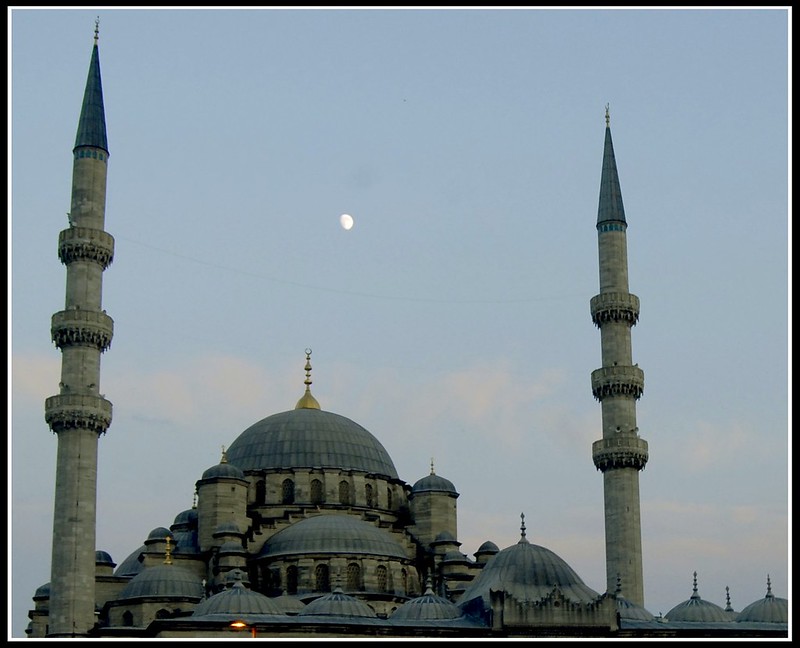