I had a truly shocking discovery the other day. Something I had safely assumed my entire life has turned out to apparently not be true.

The smilie face :P To me it goes without saying that if you make an expression that involves your tongue hanging down out of the side of your mouth you are expressing "bleh" or "ick" or "feeling sick."

The other day I met a friend who fervently disagreed, and informed me I was "fucking rude" for sticking my tongue out at her after she said she was sick. I surveyed some other friends on facebook and... was absolutely shocked to discover nearly everyone who responded thinks it represents sticking your tongue out at someone in a silly and frivolous manner.

The face facebook renders the smilie as looks just like I would expect it to under my original understanding, it does not look happy, it looks slightly unwell. Skype has always rendered it as clearly sticking its tongue out in a silly manner but I just shrugged that off as Skype going in a radical new direction with it.

To me the idea of sticking your tongue at someone in a silly manner could only be expressed by saying something like "pbtbtbtbtbt." 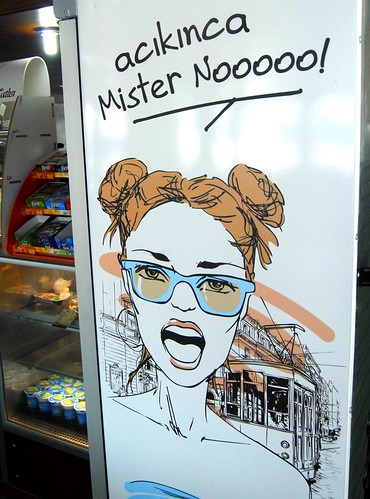 And here's an advertisement I saw on a ferry crossing the Dardanelles in Turkey.

Other random discussion items:
(1) Flickr is changing things up again? What do those of you who use Flickr think of the new "photo experience?" (I think they're trying to quietly remove a lot of features)
(2) The livejournal homepage looks like it's been substantially changed. Unlike yahoo's tinkering with flickr, I think this change might actually be a lot better. I wasn't very fond of the previous lj "home page" anyway.