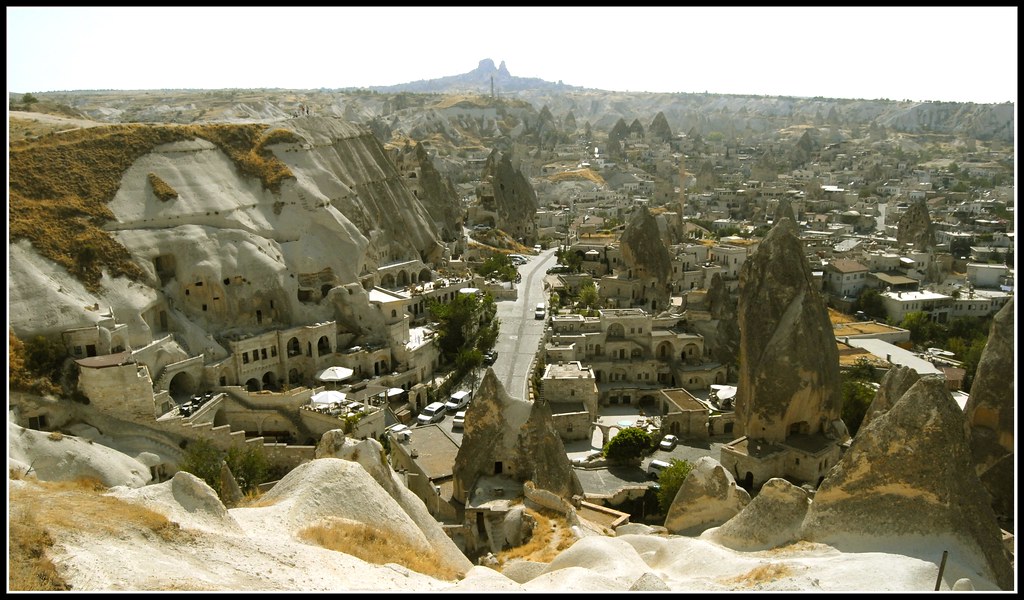 Continuing where we left off, on Monday, August 19th, I had entered the dystopian abyss of the Istanbul bus terminal, and in that gritty darkness I boarded a nice clean bus which veritably flew me across half of Turkey like pegasus ... only pegasus is a different bus line there. Some time in the night I must have passed near Ankara, judging by the map, but I wasn't aware of it.
At one point in the middle of the night the bus stopped and as far as I could tell changed at least one tire on each side (?!?).

Tuesday, August 20th
In the morning I looked out on low undulating fields rolling by, and the occasional village. All of a sudden around a bend a town emerged hewn out of the very rock of a cliff face, with fantastical spires in the middle. The contrast from the previously nondescript little villages (the center of which usually consisted of not-very-quaint squarish five story apartment blocks) to this magical looking place was quite shocking. I scrambled for my camera, we were in Cappadocia!!

Cappadocia is not a single town but actually an entire region, consisting of several towns, many valleys, countless outcroppings of outlandish rock formations, and something like the remains of 40 underground cities! I'd seen pictures of the interesting rock formations many times before but really it was the underground cities that I'd always wanted to see.

We wound past a few others fantastical looking towns, before finally arriving at Goreme (pictured at top of entry). I think it was between 7 and 9am when the bus let us out on the broad cobbled street that was Goreme's bus terminal (on far right here). It was looking to be a nice day, bright blue sky, not yet too hot.
I carried my stuff just a short way up a street to "the backpacker cave hostel" (or something like that? And checked in. The entire hotel, like most in Göreme, was hewn out of the rock cliff-face. I was lead down to the 10 bed hostel room deep in the rock. I was the only occupied bed, though two cute Scottish girls were just leaving.

I set out to find breakfast but apparently this town doesn't wake up early -- there were a great many restaurants, cafes, and kebaberies, this being a major tourist destination, but apparently nothing is open before 10am. There were also many places to rent quad bikes or sign up to go hot air ballooning. There really is no shortage of entertaining things to do here.
Finally 10am rolled around and I entered a rooftop restaurant and thought I'd order the thing Asli's dad had made, "menemen," but of course it wasn't nearly as good as the homemade version. 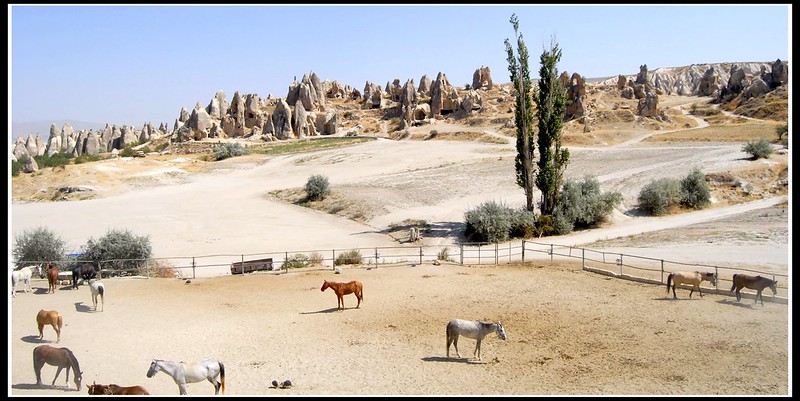 The Göreme Open Air Museum is only about a quarter mile down the road so I trotted over there next. It was an ancient monastic site and consists of a bunch of Christian churches that had been, like everything else, hewn out of the rock. Many of them had ancient murals painted on the interior walls and the audiotour mentioned many important saints and things being connected with it. Cappadocia was an important early Christian community I guess, it's even got itself a mention or two in the Bible. The audiotour also felt the need to tell me about every nave, transcept and apse. I was quite tired of hearing about naves by the end. 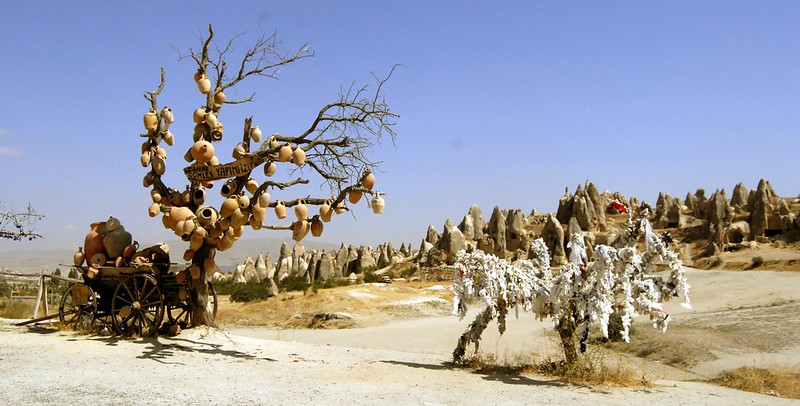 And in between Göreme and the open air museum you can buy pottery from the pottery tree. Or ride horses from the further above horsery. And there was another quad bike rental...

Returning to town I ran into the Scottish girls and chatted with them a bit. It was by now getting oppressively hot so we were sitting on a nice bench under a tree near the little creek that runs through the center of town. They were both international relations majors (like me), and had just finished a semester abroad in Jordan trying to learn Arabic. We compared notes on the (also rock-hewn) ancient city of Petra there.

Went back to my room to escape the heat and maybe catch up on the intertrons. Turns out even when outside it feels like an oven, it's fricken cold in a cave!!
That evening I had.... adana kebab? Or maybe some kind of kofte? It wasn't wildly memorable, though I can visualize the cute little outdoor restaurant, the vines hanging over the door, and the random cat that came by and brushed against my legs.

That night having the whole room to myself and Game of Thrones on my computer, which I'd only seen the first epside before, I decided to watch a few episodes. I really recommend watching it in a cave. And the frigid temperatures in there definitely added something to the scenes that take place "north of the wall." Being the only one in there, I also took the liberty of taking the blankets off several of the other beds. 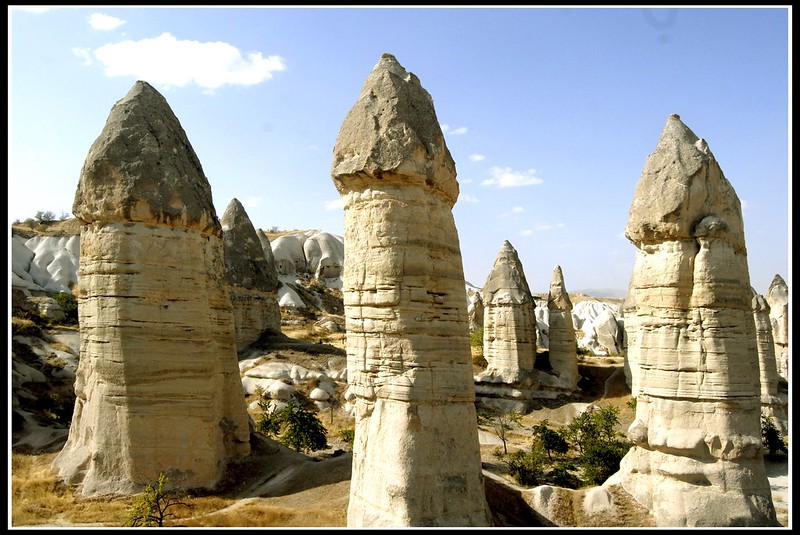 Stand by for the next episode, wherein I achieve my lifelong mission of plumbing the depths of an ancient underground city, and reach new culinary depths with the worst food of my whole trip!