Olympos; Land of the Lotus Eaters. And the Chimera! 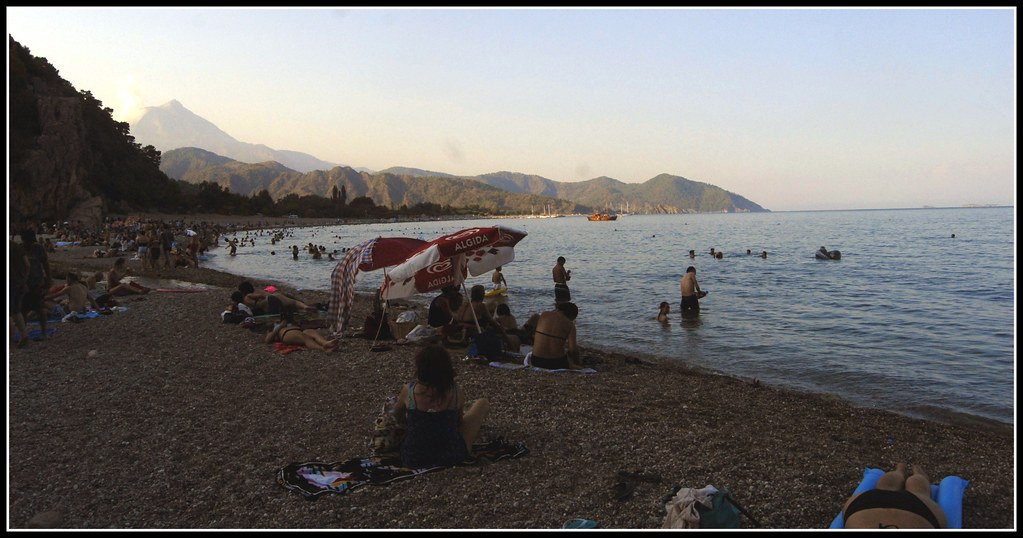 As you no doubt remember, where I left off yesterday, after climbing roughly hewn stone steps for half a mile up a mountain in the dark on the coast of Lycia, with a party of Australians, we had just neared the end of our quest for the mythical chimera monster. Up ahead through the silhouetted trees we could see the red flicker of flames! I'm assuming you've been on the edge of your seat ever since that cliffhanger ending, possibly spending a sleepless night flopping about in your bed like a beached trout. Does it eat us all? Does it roast our party of valiant adventurers into "Aussie kebab??" (to be eaten with a fried egg on it?)

Saturday, August 24th (continued)
Here at Mt Chimaera, natural methane vents cause there to be eternal flames that have been attested since ancient times. It is quite logically believed to be the origin of myths of a fire breathing monster in that vicinity (with the head of a lion, tail of (the front end of) a snake and a WTF-worthy "head of a goat rising from the middle of its back" ... [blank expression].) And was used by ancient mariners for navigation, since it would have been one of the very earliest bright permanent coastal lights. I can easily picture some young seafarer asking the grizzly captain what that light is and he, knowing full well that it was not, describing some fantastical lion, goat and snake headed creature for his own amusement.
There was a guy selling hotdogs and marshmellows and sticks to roast them on. I didn't partake, but in retrospect I wish I had just so I could say I roasted a marshmellow with the chimera's fire. Oh well. Next time.
After half an hour we headed back down and reboarded the mini-bus.

Got back I think close to midnight. Just as we were headed back into the hostel, I was hailed by a guy sitting at a table full of others, he wanted to know how the chimera was, and then I was welcomed into the group. His name was Stephen, he was from Melbourne but presently doing a semester (year?) abroad in Istanbul. It was one of those interesting and varied groups of backpackers that just kind of forms. Some more were from Australia, some were from England. I remember one guy had been stabbed "behind Taksim" (the nighclub district in Istanbul) earlier in his trip and still had a bandage on his arm and the whole arm looking bruised. There was one of the very few Americans I've met in this whole trip, a guy from South Carolina. There were two gorgeous girls from Denmark.
There were also two guys who were in the midst of intercontinental bike rides. One, a Korean fellow, had, if I recall correctly, started out somewhere in India and took a roundabout route through Pakistan, Iran, up to Georgia (through either Armenia or Azerbaijan?), and then across Turkey to Olympos, eventually planning on biking across Europe to England! The other I think may have _only_ started at the other end of Turkey but was also planning on biking to the western end of Europe.
Most of the group had already been drinking all evening of course. I had just ordered a double-raki when the group started to get up to head out to one of the nightclubs, so I had to down the thing all at once.

We walked down the road just a little bit to a nightclub sort of place that was totally packed (and don't be picturing your city dancefloor-in-a-basement thing here, this being Olympos, it was mostly outdoors. Any walls to be had were of rustic plain wood). Someone tried to order something at the bar in turkish and a jamaican looking fellow shook his head and said he doesn't speak Turkish. AND, absolutely jaw-droppingly, they didn't have ANY Efes, the pervasive beer of Turkey!!
I'm not a big club-goer but we all had a great time and were among the last to filter out. I'm not sure how "South Carolina" got back to his hostel, since he had walked here along the beach from the next valley over (a short walk by beach), but access to the beach was cut off at night by a fence and gate and security (I guess they were afraid of drunken accidents, which there no doubt would be, since I'd heard many drunk people throughout the night bemoan that they couldn't go to the beach at night.) 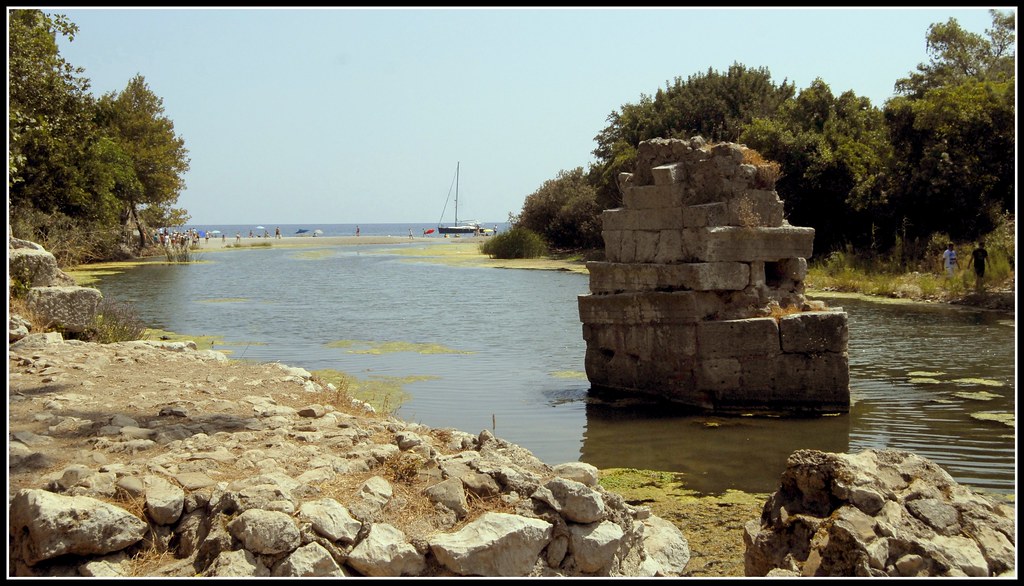 Also, there were turtles

Sunday, August 25th
The next morning I found the core of our group from the night before lounging on a divan having breakfast, and joined them. Stephen was in the process of deciding to stay yet another day, a postponement of departure that had apparently already happened several times already. I got the general impression a lot of backpackers seemed to come here and keep extending their stay. I had initially only booked one night so I went to the front desk to tell them I'd stay another day and he vaguely waved me away telling me just to let him know when I checked out.

"The group" went down to the beach, I went to explore the newer (Byzantine, vs Roman) part of the ruins on the far side of the river. Pictured above, an ancient bridge piling. Ruins were nice. In places walls were intact up over head height and one could walk along the narrow streets where there were still only a few weeds managing to creep up in cracks on the smoothly-cobbled street, and picture very easo;y what a lovely little town it must have been to live in back in ancient times.
Then I went swimming again, out around the anchored vessels, and contemplated my near-future plans to go out on one of them. My associates were by this time playing the card game "Asshole" on the beach. Feeling like I'd explored everything there was to explore here though, I decided to leave on the morrow and went to where a young fellow representing Alaturka Cruises had a makeshift "office," consisting of a chair next to a sign. Talking to him he just called his boss and put him on with me, and that guy confirmed he had a reservation for me the next day (I had more than half expected a reservation hadn't actually been made). I was told to come back at 7 that evening to meet the boss fellow, though when I came back the young guy said his boss was passed out drunk but there was no real need for me to see him so I'd just meet him in the morning.
That night after dinner the group once again re-formed and spent a few hours drinking and having a good time at the tables. We all learned a fun drinking game that involved going around the circle counting to (15?) and making a new rule for one number each time we successfully went around until it was extremely complicated. People who mess up have to drink of course ... Stephen was pretty well obliterated by the end. ;) but was able to redeem himself at the same game a few days later.
Later shenanigans of course ensued. I ended up walked up the road with a small group, then hopped in a passing car with a Swedish guy I knew and we were taken to a nightclub up the road. Where I thought the others were coming but they never showed. Finally left with my Swedish friend and a Turkish (?) couple in their convertible. Winding down the curvy mountain road in the warm night air in a swanky convertible with the top down felt fairly like living the dream. 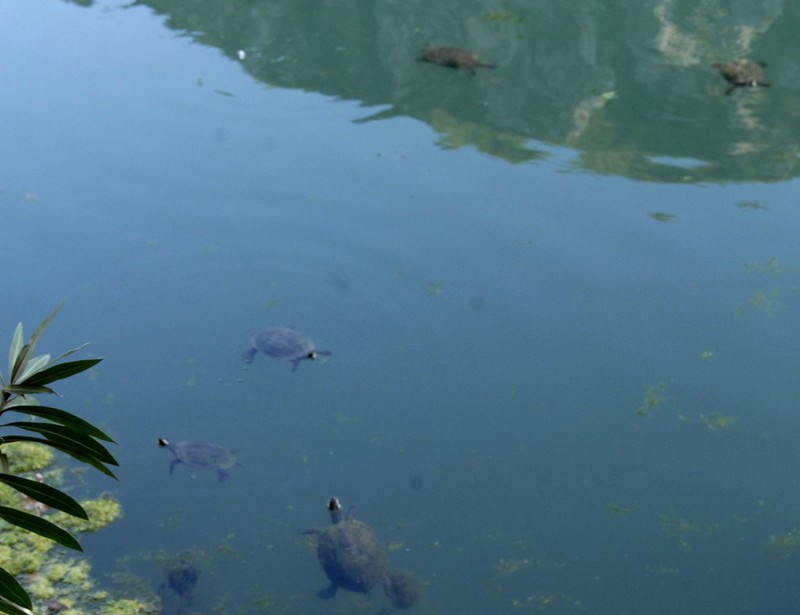 Monday, August 26th
In the morning I packed my stuff, checked out, and was sitting having breakfast waiting for the Alaturka guy, who came just a few minutes after Stephen joined us on the divan.
"Did you say you had a friend who was interested in coming too? Because I have an extra spot" asked the Alaturka guy.
"oh that was Stephen here, but he decided against it"
"Ah, well," piped up Stephen, "why not!" and moments later he had dashed back to his room to stuff his stuff in a pack, checked out, and we were off! Way to make a snap decision! (:

We boarded the little mini-bus (dolmas) in which the Alaturka guy was collecting his passengers and went from hostel to hostel collecting people. One girl was not be found, because apparently he had come to collect her, and then told her he'd be right back. Moments later someone else came along and said he was there to collect her. She suspected she was to wait for the same Alaturka guy but she asked the person at the front desk her her hostel but they said no they should get in this dolmas. So she got in and was whisked away, much to the alarm of our guy, and probably herself. I can only assume she was to be fed to the chimera. Anyway she was never heard from again by man or beast.
Just kidding she apparently realized something was terribly wrong and got out at some random corner and was able to call our guy, and we stopped and collected her. I'd imagine it was an anxious moment for her, since the place she was waiting was the middle of nowhere along the winding coastal road through the rugged mountains.
We continued on about an hour and a half down the coast to the seaside town of Demre, where the 80-90 foot traditional schooner rigged gulet Lucky Mar was awaiting us at anchor.

And thus begins Part IV, adventures on the high seas!! 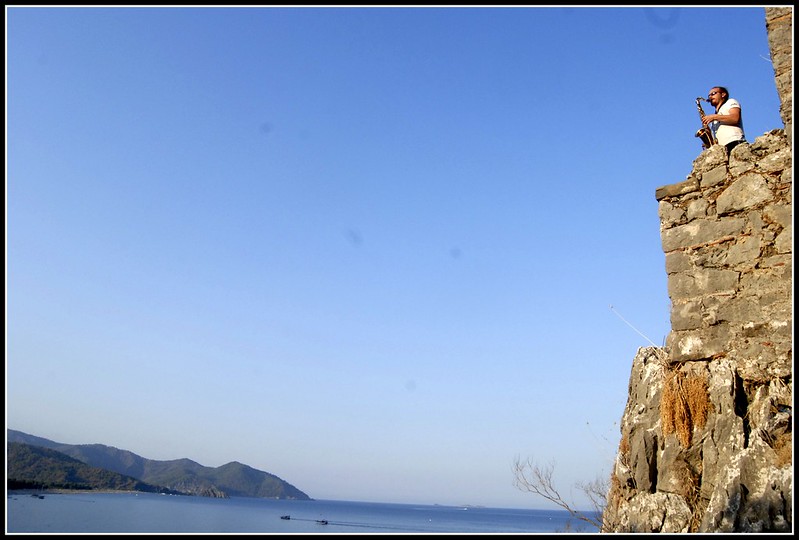 Looking back down at the Olympos bay from the Genoese fortress, where a saxophonist practices in the evening light.

Next time: in which I fulfill my dream of boating in the Mediterranean! Sea turtles, adorable little isolated fishing villages and more!