Last week - students sit in circles, where they can find room amid the computers that sit atop every desk. Upon arriving at class they'd been told to go outside and write a description of a random stranger, as practice writing character descriptions. Now they discuss their findings. This fairly overweight fellow is explaining, somewhat smugly, what you can learn about someone from their appearance, as if he's a god-damn master of CSI or something. He's wearing a light blue shirt with a big picture of a wolf's face on it.
"For example, if their backpack is loaded with books, they're probably a full-time student. If they've only got a a book or two and a notebook, they probably aren't." He repeated this again a little later and shared it with the class as if it were some great wisdom. I look at my desk, all I have is the book for the class and an old blue binder that also contains diagrams on sail theory and charts and tables for navigation.
"And you can look at their hands and determine whether they work with their hands like they do construction, or maybe they just work at a desk," Mr Sleuth continues. "And if they are wearing flip-flops maybe they live by the beach." Someone hire this guy as a private eye. This is Southern California, who doesn't wear flip-flops?
I look at my hands, I'm not so sure he'd get a right answer about me from my hands, we're not all caricatures of what we do. I look at my glossy black boots and wonder what he'd say about me if he didn't already know the answers. But this whole thing got me thinking. We almost never describe ourselves the same way we describe other characters. In their introductions, people usually come out shooting with their relationships, their age, their jobs, but that's not how we'd ever dream of first describing a character in a story. Is it simply because the view from within is different, or because we all recognize we are inherently biased about ourselves, or because we realize anything we say about ourselves will inevitably be critically analyzed by the readers as "thats what they WANT us to think about them." We say something complimentary, it looks like we're being self-aggrandizing. We say something negative, it looks like we're fishing for sympathy. It got me really wondering, if I were a character in someone else's story, how would they describe me?

So let's say you're sitting in this class looking at the fellow with glossy black combat boots. If our perspective is "3rd person limited" and we don't know any backstory, we might say we see a lanky fellow wearing sturdy olive-colored carhartt pants, held up by black suspenders over a black t-shirt with some sort of sailing vessel on it. On his right wrist there appears to be a bracelet woven of some kind of coarse yarn. On his left there's a bracelet of orange clay beads and a rolex with a blue band. Closer inspection may reveal that the face of the rolex is somewhat rusted. He's probably not doing a great job of pretending to be impressed with our classmate's detective skills, but doesn't bother saying anything about it. He's busy wondering what the connotation of the boots and suspenders would be deemed to be.
He looks at the turkshead he wove on his right wrist and thinks of the numerous times he's been singled out in public places by fellow sailors because they recognized it, confidentially sidling up to him while nodding at the turkshead, asking "what ship you from?" or simply passing with a wink and gesture to their own turksheaded wrist.
The orange clay bracelet probably looks like just some silly thing to his classmate, but it harkens back to a ceremony in the city of Ibadan, in the southwest of Nigeria. One hot humid February day, there he was, dressed up in African robes, with some kind of plant shoved ceremonially under his hat, and the council of traditional chieftains all around him, it's all a bit of a blur now but there was some drumming and some speeches and in the end there was a plaque conferring the title of "Chieftain Soyindaro," and the presentation of a necklace of orange clay beads and accompanying bracelet. At first he thought it was a bit silly himself, but soon he found that everywhere in Nigeria he went while wearing the beads people called him "chief" and treated him with respect. Once an armed and uniformed soldier in the airport was about to insist on going through all his stuff until he saw the beads.
He remembers the beautiful princess Nwaji, whose father is a king near Port Harcourt, languidly sliding her rolex off her brown arm and giving it to him, in the quiet of his hotel room in Abuja. Despite her gold adornments, he always suspected it was fake, this is Nigeria after all, but you never know. Either way he should have perhaps been more careful of it, shouldn't have been wearing it when he got submerged in Saklıkent Gorge in Turkey a few months later.

Of course, most of the important part of our conception of a character is based on their actions and decisions, but there's enough of that before and after this in this livejournal, so we'll leave this description to a moment in time, while our subject is looking thoughtfully at his inflated classmate, at the guy who when we were assigned to write "the story we've told a thousand times" didn't write anything because he said he had no stories.


And an Unrelated Photograph 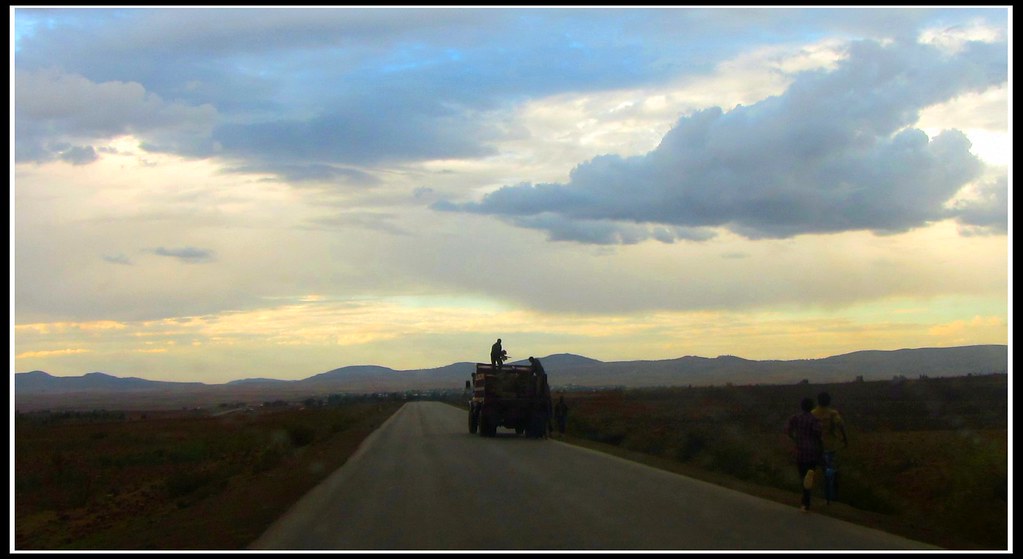 Catching a ride in Ethiopia. While I don't carry any artifacts of Ethiopia on my person, I carry it in my heart, so here's a whistful picture.