I. Prologue   This chapter must necessarily begin on a rooftop in The Faraway Land. Not a forgotten dirty rooftop with evil-looking air conditioning machinery, but a comfortable rooftop covered in carpets, bathed in warm lighting, sheltered by a canopy, inhabited by low couches.
I'd just returned from the tombs, where quite out of the blue, while I tried to photograph a tortoise, my auburn-haired Turkish lass had offered to meet me in Çanakkale.
The tortoise photo didn't really turn out.

But now I had a more difficult quest than battling turtles, I had to find a way to travel 396 miles across Turkey in the next 12 hours, at night. It was 8pm, and She was already speeding south on a bus from Istanbul.

II. Through the Night
First I asked the balding man sitting behind the reception desk over at the other end of the roof. He glared at me over his reading glasses and said he could help me tomorrow.
"No I need to BE there by the morning" I emphasized.
"Sorry I can't help you till morning" said the man, busying himself with reorganizing the desk. I narrowed my eyes in his general direction, suspecting he just wanted me to pay for another night.

Next I tried to make sense of the bus routes but because they are all different companies serving different cities it was proving mind-bizorgling to plot an immediate overnight multi-city route between two non-major cities.

I emailed a travel agent I knew in Istanbul. I had initially wandered in to their Istanbul office a month before just because I'd never used a travel agent before and was curious what it was all about. Since then I'd kept in touch with the friendly people at True Blue Travel Agency despite never booking a thing through them, and somehow they continued to humor me. In this case, despite the late hour, Ruta from True Blue actually called me moments later and talked me through a hare brained bus-taking scheme.
I checked out with the sour looking man behind the hostel desk, who seemed rather sullen that I had managed to escape despite his lack of cooperation, and went down to the street to await a local dolmuş to take me to the city autogar (main bus terminal).

Nine o'clock, one hour to catch my bus at the autogar. This end of town was dark and quiet. Nearby a grocer was wheeling his wares back indoors. I looked up hopefully at every passing vehicle. I began to fret.
Finally the distinctive white minivan shape of a dolmuş came along going the correct direction. I flagged it down with my hand and hopped on with my seabag. "Autogar?" I asked the driver hopefully, and he nodded.

An uneventful wait at the autogar, and seven hours rolling through the night on a Turkish inter-city bus -- like all inter-city Turkish buses, it would put Greyhound to shame. Comfortable seats, working AC, occasional brief stops at nice rest stops (well lit, well stocked with food and snacks), not packed in like sardines. And they always roll a tray down the aisle occasionally with complementary snacks and tea or coffee, you know, like the airlines in America no longer do.

Frantic hour-long layover in Izmir as I ran around the enormous nearly deserted terminal trying to figure out where and how to buy my ticket for the 6am bus on Troy Lines to Çanakkale. Found Troy Lines hidden in the basement at 5:40, and he wanted to sell me a 9am ticket. "No, there is a 6am bus!" I insisted. He called his supervisor. They looked at their computer and scratched their chins. They sold me a 6am ticket.
Finally, with literally less than two minutes to spare I arrived at the 6am bus with the correct ticket in hand. Four more hours smoothly whirring along the Turkish countryside as the sky slowly became a lighter shade of blue and the morning sun at last spilled over the hills to illuminate valleys and villages. I tried to text Asli my location, as gleaned from a large sign we passed, but apparently all I sent her was the words for "main exit."

The giant replica horse at Troy slipped by out the window, and soon we were pulling in to the Çanakkale autogar. I easily recognized it, I'd been here with Asli two months earlier, when fields of happy yellow sunflowers covered the hills. And soon we were pulling out of it. Normally I try not to act like a panicked and confused tourist, I like to think I'm pretty good at looking like I know where I'm going no matter how deep in a non-English-speaking countryside I am, but this quick departure from Çanakkale was deeply alarming to me.
"We're not stopping here??" I exclaimed to my fellow passengers, jumping to my feet. Around me all I saw was wide brown eyes looking at me in surprise. Finally a young woman a few rows back spoke up in English.
"We're headed into town now"
"Oh. Thanks." I said with relief, sitting down a bit sheepishly.

Asli was waiting for me next to the same seaside cafe we'd dined in before. It looked out on the Hellespont, the Dardanelles, the narrow straight connecting the Mediterranean with the Black Sea, the gap through which Jason voyaged after the Golden Fleece, a gap which had flummoxed Persian, Roman, and Ottoman armies, staring from their castles across the gap at their enemies. A gap which flummoxed Allied armies in World War I as well.
Across the gap today, one sees on the Gallipoli Peninsula an enormous clearing in the forest, onto which has been sculpted a Turkish soldier amid flames, valiantly holding a rifle while gesturing to the words "Dur Yolcu" -- "Halt wayfarer!"

III. Memoriams.
Saturday, August 31st
The next day Asli and I took the ferry across the straight and (for 70 lira a person) joined a tour group of Aussies to visit the ANZAC memorials. The Turkish guides were respectful, the Aussies quiet and serious. The slopes upon which the ANZACs had fought were rugged and steep. The wind gently rustled amid the pine trees, and I looked at them and thought "I wouldn't have pictured pine trees here." And I looked out at ANZAC Cove and thought "well there's certainly less beautiful places to fight trench warfare." The cove was broad, blue, and serene. 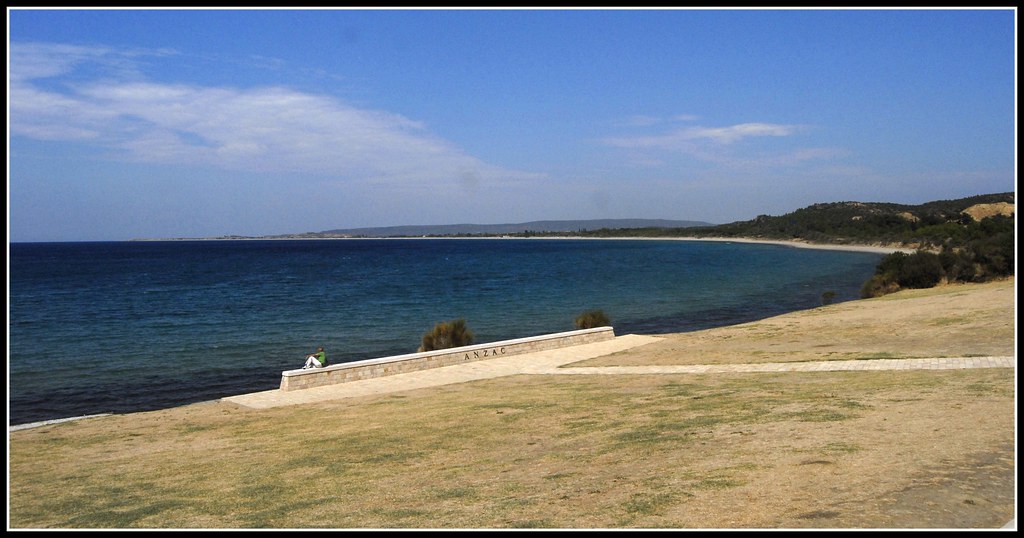 In the cemeteries, rows upon rows of clean white squares marked the British, Australian, and New Zealand fallen. On a hilltop called "Lone Pine" a large memorial contained a wall with the names of all the ANZAC fallen. It brought to mind the American Vietnam War wall. It occurred to me, there had been so much questioning of what the Vietnam War had been all about, "why had all the names had to appear on that wall?" -- yet, here, on this wall, these names, I've never seen anyone questioning it, even though why a young man from Brisbane would have to die in Gallipoli must surely have seemed convoluted. 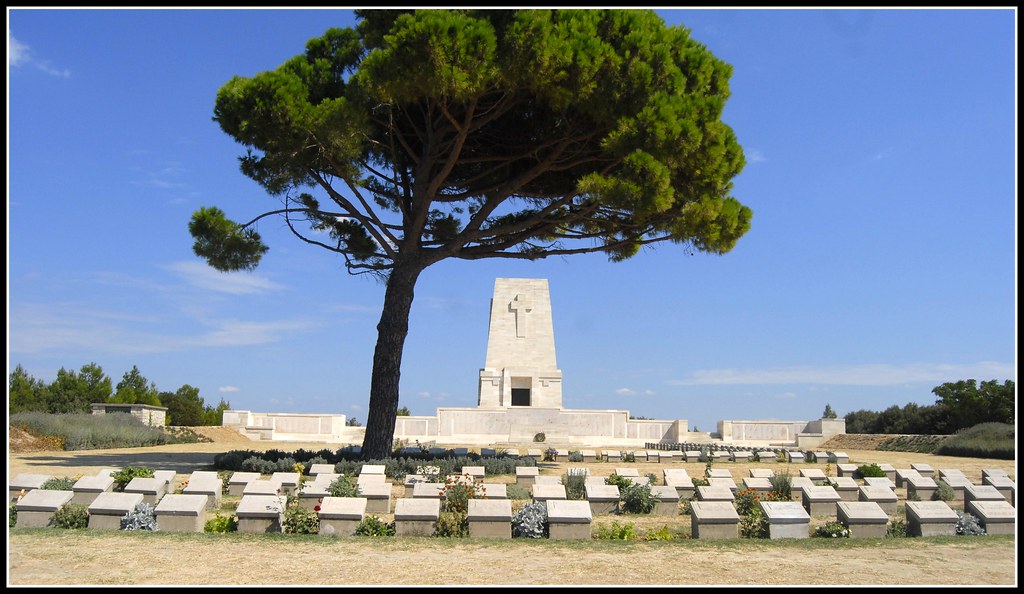 "The sunflowers are all dead." I observed as the bus wound its way back to the ferry platform.
"Hm?" responded Asli absently.
That night we couldn't find a comfortable bar. Everywhere was deserted, playing irritating music. We had some raki and called it a night in a state of vague annoyance.


Sunday, August 31st
The next day Asli and I took the ferry across the straight and (for 7 lira a person) joined a Turkish tour to visit the other side of the trenches, the Turkish side. The guide proudly told us tales of heroism: of the Turkish soldier who lifted 250 pound shells by himself to fire his cannon after the rest of his gun crew had been killed; how commander Ataturk had ordered a unit to make a suicidal stand until re-enforcements could arrive, and they did. We stand by a statue of a Turkish soldier carrying a wounded ANZAC back to his lines, based on another story from the war. The reconstructed trenches wind along the top of the bluff, off to our left and right, and below the turquoise waters of yet another bay the British landed in gleam. It's easy to picture the men sitting in these battlements, staring down at that same bay down below, as strange men from half the world away swarmed their beaches.

It seemed to me the foundations of a good novel are here. A story of an Australian man and a Turkish man, both called to war, called to try to kill on another on the rugged Gallipoli peninsula in 1915. Fighting for a soon-to-break apart British Empire and a soon-to-disintegrate Ottoman Empire. The Ottomans win the battle and lose the war. And a parallel story, of the grandson of one and the granddaughter of the other, who fall in love in 2015. 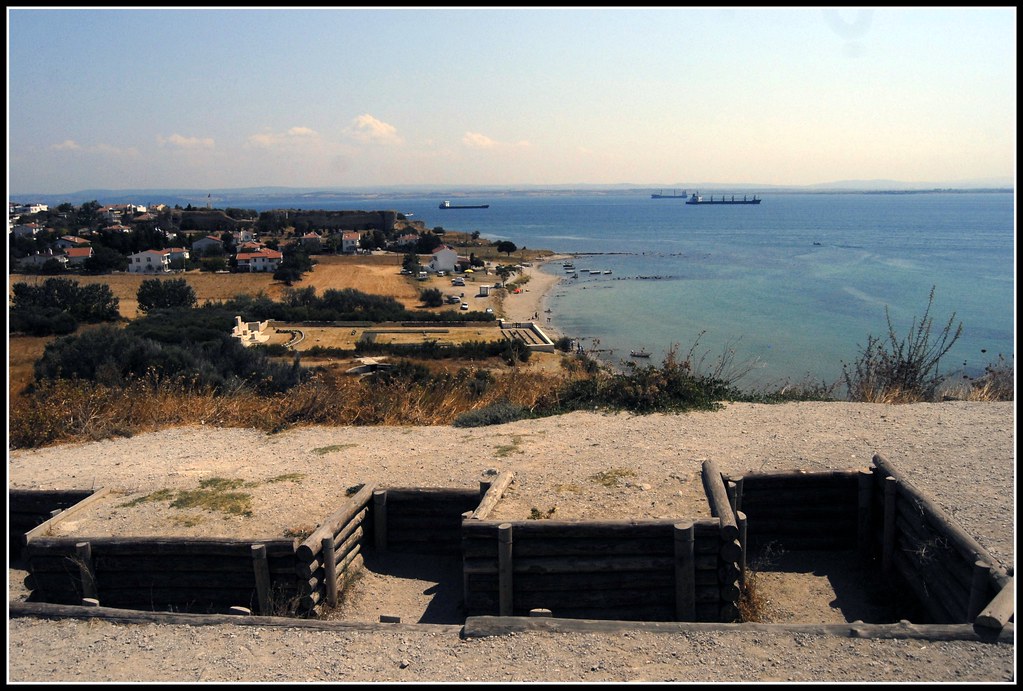