"I don't know, the Greeks have seemed really conciliatory recently" said young Polydorus, gazing at the giant horse standing in the midst of the smouldering camp.
"Do not trust the horse or whatever it is," snapped Laocoön, the old priest, his pointed hat glinting in the sun. "I fear the Greeks, even bearing gifts!!" Unfortunately at that moment he tripped painfully over a broken spear shaft in the grass. Weeds grew tall in the plains where once there had been tilled fields. The grass was littered with the debris of ten years of war -- broken chariots, bits of armor too battered to be salvaged, smashed helmets with grass growing already from the eye openings. The party marched across the plain towards the former Greek camp, shining bronze spears and shields at the ready.
There were no signs of the Greek army though. On the hill behind the party of Trojans the impenetrable walls of their city stood proudly, undefeated. Wary of a trap the Trojans approach the Greek camp arrayed in a line for battle. Off to their right the sea sparkled in the sun.
"How long has it been since they have tried to attack us? Clearly they have grown weary of the war at last and left" spoke up Antenor, advisor to the king. Some people nodded. This was true. As the group climbed the rise upon which the Greek camp had been located, they could see everything moveable had been removed and everything else destroyed. Looking out to sea they could see the distant black hulls of a multitude of ships sailing away. Looking up they beheld an enormous wooden horse.
"What is it??" someone asked, voicing the question on everyone's mind.
Suddenly there was a commotion behind some of the smoking wreckage. Several Trojan soldiers immediately ran there with their gleaming spears raised, and returned dragging a lone ragged Greek soldier. The guards dragged him in front of Prince Deiphobus.
"What happened here?" the Prince demanded.
The hapless Greek's eyes darted about at the spear points hedging him in from all sides.
"I, I, we, we left. The Greek army has gone home." he stammered.
"That's no way to address a prince!" Deiphobus growled, approaching as if to strike him. The Greek involuntarily tried to take a step back and painfully bumped against a spear point, grimacing.
"They, they've gone back to Greece, y--your royal highness."
"And why are you still here?"
"My name is Sinon, son of Aesimus. Odysseus wished to sacrifice me but I escaped. I hid in the marshes until they had boarded their ships and left ... your royal highness"
"And why, pray tell, is there a giant fucking horse here?"
"It was built as an offering to Athena to guarantee safe passage home. It was thought if it was built big enough the Trojans would not be able to move it into their city." said Sinon, cringing.
Prince Deiphobus smiled triumphantly and let out a hearty laugh. "You fools, we can have this thing in our main square this very day!" He looked around the crowd and could see many grinning faces
"Don't be foolish! It's probably full of Greeks waiting to slither out and kill us like serpents!!" cried Deiphobus' sister, Cassandra, but the men just looked at her and grinned.
"The Greeks have given up trying to trick us" soothed Antenor, the advisor, "when was the last time they tried anything devious? Let us spite them by bringing this into the very midst of our great city as a centerpiece to our victory celebrations!" 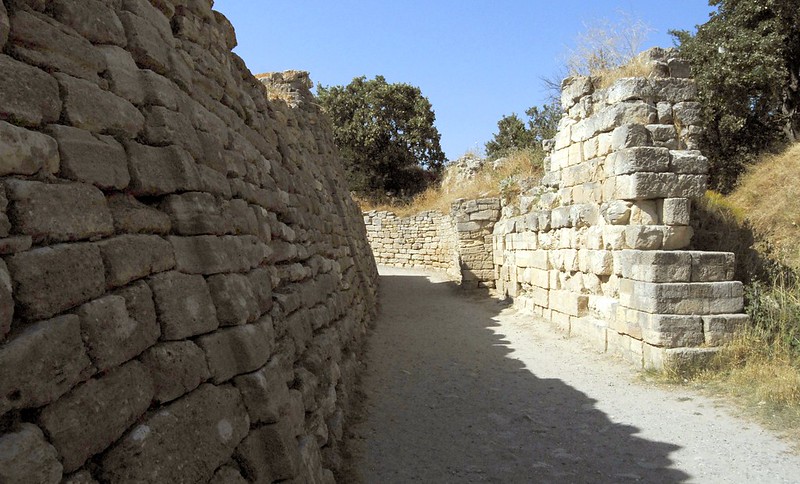 The ruins of Troy are still impressive, 3200 years later.