It was strange, really. To go to Australia for a year I packed the morning of my flight. This is only a month, and its not like I haven't done it before, and packed the morning of, but for some reason I developed a deep paranoia I was going to forget something important. I think I was stressing about it for a least a week prior to departure. Even did a large amount of my packing two days before departure.
And then as I pulled away from the house, and we got on the freeway, when I didn't suddenly remember one more thing. It kind of freaked me out. Got to the airport thinking "this just feels wrong. I must have forgotten something. What is it???" ... the longer it took to realize, the more important I feared it would be.

I board my flight from "John Wayne," the Orange County airport, to Atlanta. The guy sitting beside me takes out the Wall Street Journal as we taxi away, and on the front cover is a picture of a bomb blast site in Abuja, the capitol of Nigeria -- where I'm usually headed. Guess there was another bomb blast there yesterday. I found that a bit ominous.

Had some surprisingly good tacos at the food court in the ATL airport, and an overpriced margarita in a plastic cup, which, in wild contrast to California liquor laws, I was freely able to leave the restaurant area holding. Boarded my Air France jet with margarita in hand and settled down to watch the Desolation of Smaug. My seat was in the middle of the middle row.

As they closed the gates I realized that in an aircraft that looked otherwise almost entirely full, for some reason the seats on either side of me were unoccupied. I could hear angels singing, as a mysterious light from above shone down upon these two empty seats.

Film Review Intermission
Desolation of Smaug - I thought a lot more of it than I'd quite like was cartoonishly cheesy -- the ease with which the protagonists sometimes completely accidentally kill fearsome attacking orcs. That which wasn't cheesy was usually wholly invented parts of the story. So in conclusion it was pretty and what they were trying to do was no doubt well executed but I ultimately felt it didn't do the story real justice. Really the large amount of cheesiness I felt really hurt the story. C+

Lone Survivor - Wow this is a true story right? I haven't bothered to look up how accurate it is, but if so, man, that guy went through some gnarly stuff. There were a few cheesy moments where people took time to say something sappy to eachother at a time when I'm pretty sure they would have been too busy fighting for their lives, but overall I felt it had a high degree of realism, which I noted really helped one get into the story. If you like movies with lots of action and shooting, this is a movie for you. B

The Secret Life of Walter Mitty - This movie was cute and entertaining, and not too cheesy (which you may have gathered is something I loathe and despise in movies). Some scenes shot in some interesting locations such as Iceland and Greenland too. A

End of Film Review Intermission
Couldn't sleep on the flight. For some reason wasn't even that sleepy. And hadn't had any caffiene since the morning I left.

Had to go through security in the Paris Charles de Gaulle airport, and let me tell you, they don't know how to do security nearly as efficiently as we've sadly learned to do in the States. People putting their bags on the loading end of hte conveyor and then taking forever to get it all sorted out before tehy're ready to move on, no single file line going through the metal detector. Security check personnel not super professional (or rather, more like ours used to be before the whole tihng got reorganized after 9/11), people shouting at eachother in three different languages. On my third try I made it through the metal detector and got about 15 feet away before it went off and they called me back. WTF.

Still can't think of what I forgot. Still freaking me out.

Arrival in Paris CDG was around 8:15, with a scheduled departure around 10:30. Departing flight kept getting delayed until noon. Slept for awhile on some seats that didn't have rails between then, one hand in a death grip on the zipper of my backpack. Woke up and met the other Winrock volunteer, an older woman who's been to Guinea before (circa 2001?), will be working in a different area but we'd be flying in together. I asked her if the food in Guinea was any good and she just started laughing.

On boarding my flight from Paris to Guinea I was informed I'd been upgraded to first class. Seat 7A turned out to be fully reclining with a big cavity under the seat in front of me for me to extend my legs. They brought us a choice of champagne or banana juice while we waited for all those mere mortals in cattle class to board -- I naturally chose the banana juice.
Lunch was three or four courses, it was hard to keep track, they kept bringing exciting things over. For a beverage I asked for the red wine and the waiter/flight attendant (with a confidential smile and of course a strong French accente) showed me two different bottles of red wine (full sized bottles, not the small single servings of questionable stuff you get in coach (that is if you're anywhere other than the US, where you can forget about it entirely)). When I shamefully admitted I had no opinion between the two he said with a wink he'd give me both so I could decide. So I had two glasses of wine, not that one wouldn't have magically refilled itself. For what its worth I found I preferred the one from cote d'ore.
The first course of lunch involved, among other things, little balls of something that tasted vaguely fishy and a little grey-ish pink slab that tasted of liver, and a choice of three different kinds of balsamic viniagrette for the salad (!?). Turns out it was scallops and foie gras, the latter of which I didn't eat more than a nibble. Second course was beef with some tasty sauce. For dessert a creme brulee showed up. I probably haven't had such a fancy meal since, I don't know, high school prom.

The Grand Budapest Hotel - Full of good food and wine I watched The Grand Budapest Hotel, which I thoroughly enjoyed. Maybe it was the wine but I thought it was just SO good. Reminiscent of other Wes Anderson movies such as Royal Tenenbaums, Life Aquatic, that one about a train, but whereas the others had started to seem they had too much in common this felt like a fresh look at the Wes Anderson genre (yes he's made his own genre I do believe), and I thought it was just the right combination of cute, interesting, intriguing, silly, and all around amusing. A+

Then, feeling fat and content and snug on my back like a happy sea otter I dozed away, barely able to even summon the interest in peering out the window at the coast of Spain down below. 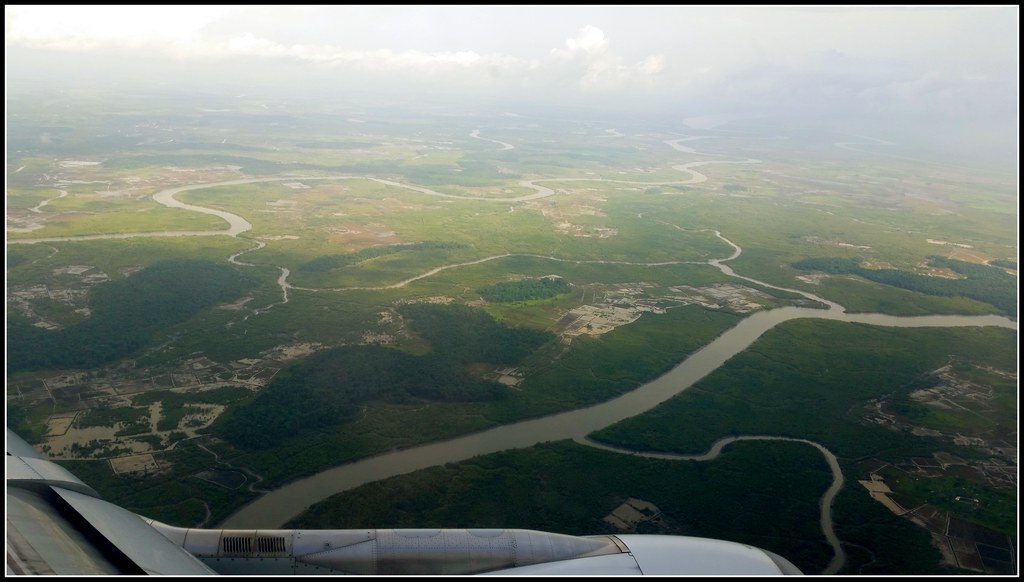 My first impression of Guinea was the view pictured above. A landscape seemingly devoid of human development, a maze of curving rivers and damp looking foliage. And this just outside the capitol.
Didn't start seeing buildings until just before landing. The capitol, Canakry, is build on a peninsula, and, I believe, built from the tip (an island off the tip actually) first, so the airport was probably at the "base" of the peninsula. "why don't you google that before you write an entry about it" you might ask. Except my connection is super spotty. "Let me google that for you" is a First World Problem.
Met a girl who had been sitting the row in front of me. She had come from Phoenix, probably on the same ATL-CDG flight as me as well, she was with the World Health Organization, here in Guinea to fight the ongoing ebola outbreak. Got through customs went super fast, getting my baggage took longer but by and by it all came down the ramp, and we were out the door, met two winrock staffers who drove us across town to our hotel. Total travel time, around 28 hours I believe (its hard to keep track of time while traveling but I think I left OC at UTC 1600, Thursday, and arrived at my hotel in Guinea at UTC 1800 Friday)
As opposed to other African capitols I've been to, Conakry feels much more like just a really big village. Within a block of the airport there were houses with corrugated metal roofs and alleys that smelled of sewage. The Lonely Planet guidebook had described Conakry as "smelling nausious" in general but the misty rain must have been dampening that effect. My general first impression of Guinea, in a word, would be "damp."

Hotel is decent. Electricity hasn't gone out once yet. Has internet which sometimes works (cue that pyramid of necessities that has wifi on it -- ironically I'd link it here but, yeah, internet), AC works in one of my rooms (I have a suite that by space allocations at least would certainly compare favorable to Motel 6), albeit while making an irritating humming noise that necessitated my turning it off to fall asleep. Shower seems to work just fine (no little bottle of shampoo provided though).
Edie, the other volunteer, got an even bigger suite on the top floor, but several things were broken or have broken on her, including the shower door which apparently fell and mauled her while she was taking a shower. Africa, its a dangerous place.

We went walking around looking for a place to eat yesterday evening. Area around the hotel consists of muddy potholed streets, kids playing soccer, "functional squalor." None of the restaurants the hotel staff had told us about seemed to be open so we ended the evening hungry.
This morning Edie and I had breakfast at the hotel restaurant next door (omelettes, really good croissants). We were going to go to church next but it turns out Edie thought it was Sunday and while I thought it slightly odd, I wasn't certain church wasn't a thing that might be happening on Saturday. I don't go to church in the States but in Africa I do, both so I don't get stoned as some sort of unbeliever, and because its an interesting cultural experience that gets you into the middle of the community. The catholic church has English and local language services, and we're going to try to get to the latter.

Never did figure out what I forgot. I find this very unnerving. I'd say feels like it must be bad luck not to forget something, but I had remarkably good luck with my flights, seatingwise. Still though, I'm left waiting for the other shoe to drop.

LJ Idolists don't be alarmed when I reuse this narrative for LJI this week. Maybe I'll even submit this one as a placeholder if I don't have a chance to rework it.