Alright ladies & gentlemen, it is time to have the talk. That's right, I've been meaning for awhile now to sit down and have a serious talk with you about the birds and the bees.

You see, last summer while I spent my time killing countless small furry animals, I learned a few things about a secret order some of us like to call Hymenoptera. What I mean to say is I'm going to tell you about the bees and the other bees now. 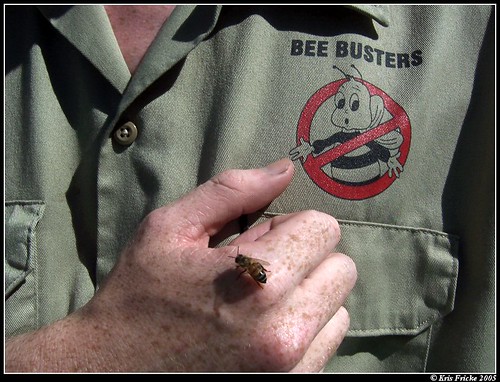 Honey Bees - Are actually more like orange & black than yellow and black if you think about it ... and believe me I had more than enough time to think about that. If they live in a man-made box its a hive, if they've made their own nest somewhere its a feral colony. Colonies are much more prone to diseases than hive boxes (as boxes allow them nice evenly spaces straight corridors for cleaning), and so bees thoroughly benefit from their interaction with man. And yet some fascist vegans refuse to consume honey for god knows what reason.
In what sounds like a classic science fiction story (only, its true) some mad scientist brought 26 Tanzanian queen bees to Brazil in 1957. They subsequently escaped and have created the entire "killer bee" population that has since spread up from there to the southern reaches of the United States. They really are not at all as scary as people make them out to be, just a little more defensive than more common Italian or Hawaiian bees (who spend their time riding vespas or hula dancing, respectively).
Incidently the difference between these bees was caused by natural selection. In Europe bees were primarily cultivated by beekeepers, so the more "userfriendly" docile ones were selectively bred. In Africa, however, sustainable apiculture (beekeeping) never constituted a significant portion of the bee population -- rather, honey was harvested by destroying hives (both by humans and animals), so the colonies that survived were the "meaner" ones. So... suck it creationists.

Hornets - Some people, especially the elderly, like to refer to any wasp-like insect from a yellow-jacket to a humming-bird as a "hornet." I really don't know where they got this idea. Hornets are an endangered species in Europe, and have never been wild on the American West Coast. So seriously shut up about them. Also, I found an amazing cinematic quality video of an epic battle between hornets & honey bees, I can't believe its for reals.

Wasps - There are two main types of wasps one finds here in California (and a number of rarer types). Unfortunately the wikipedia article on them sucks so I'm going to have to go entirely from memory here. First off, if you don't know the difference between wasps and bees (and I've found an alarming number of people don't), you are in my opinion an idiot and I'm not going to take the time to explain. The two main types of wasps here though are the Golden Umbrella Wasp (Polistes Aurelius) (which is yellow and orange), and the European Paper Wasp (Polistes Dominus), which is slightly smaller and more common than the Umbrellas. Dominus wasps have sharp construction-vehicle yellow-and-black markings. The two species act essentially the same so I'll talk about them together henceforth.
Now wasps look fricken scary, and whereas in elementry school I used to freak out my classmates by holding honeybees in my hands, I always gave wasps a very wide birth. Well it turns out they are actually the most pacifistic of the Hymenopterids I've had experience with, and will only sting you if you assault them personally. It could see you looting its nest and killing its children and if its not on the nest it'll just say "fuck that, make love not war" and go be emo.
Funny story time: once we got this call and the lady told our fearless leader David Mardner that every time someone rang her doorbell a wasp would come sting them in the face. Knowing that wasps are not aggressive like that, David dismissed this claim as clearly the product of hyperbolic wasp hysteria. He took the call, and arriving at the house proceeded to the door and rang the doorbell. A wasp came out of nowhere and stung him him the face.
Turns out the wasp nest was actually in the doorbell.
Actually getting stung by a wasp is so rare that despite being employed killing them for over a year, my coworker Jeremy had never been stung by one. He once expressed an interest in actually trying to get stung by one to know how it compared to other stings (he'd been stung by everything else already). What a nut.

Bumblebees: Now bumblebees, on the other hand, are fucking flying battlestations. Fortunately one only rarely comes across their secret lairs, and I never had a bumblebee call during the summer I worked as a bee buster. Bumblebees live in colonies of a few dozen up to maybe a hundred. To quote wikipedia "Often, mature bumblebee nests will hold fewer than 50 individuals, and may be within tunnels in the ground made by other animals, or in tussocky grass."
Jeremy once got a bumblebee call. It was on a hillside with small bushes. At first he couldn't find it, but then he stepped on a particular shrub and heard an angry buzzing sound that rapidly got louder. Suddenly a few dozen of these angry little deathstars launched out of the ground under the bush and set upon him. Bumblebees you see, can and will both bite and sting (and not die from stinging you), and are also capable of a certain degree of burrowing/tearing (I would of said they're closely related to Carpenter Bees, but Wikipedia is telling me they're no closer related than both are to honeybees, whatever they fucking look the same except Carpenter's are all black), so they'll land on your protective bee suit and start trying to burrow/tear a hole to jam their stinger in. Also I'd imagine they must have been somewhat resistent to our +3 nerve gas attack that kills other things immediately, because otherwise Jeremy would have made quick work of them. Jeremy sustained at least one sting in this encounter and he said it hurt and swelled up in a manner exponentially worse than the other stings he'd received.

Yellow Jackets: These guys are actually pretty underrated. I would have thought they were no worse than honeybees .. wrong. We get a call for yellow jackets, we call for backup. They're smaller than honeybees, so they are better able to get into any orifice they can find in your trusty bee-suit. They bite rather than sting, which just means a single one can get you about a million times more than a single bee could. Seriously, killer bee infestation: no problem -- yellow jackets: call for backup and break out the most potent chemical weapons.
Yellowjackets are actually a type of wasp, but they look more like skinny honeybees (that are yellow and black). Interestingly, they are carnivorous. I once saw one carting away a disembodied bee head from a destroyed honeybee colony. Morbid bastards.

Mud Daubers: Are another type of wasp. They build mud nests on the underside of eaves. Apartment complexes would pay us a 100 bucks to get rid of them, we'd show up and bat them down with our hands or a broom if out of reach. These things will not sting you, and actually, like the paper wasps discussed above, are beneficial to have around, since they eat less pleasant things like spiders, and pests that are harmful to your gardens. So we've actually talked potential customers out of having us kill wasps before (since our boss Dave actually loves insects, and the rest of us, we get paid whether or not we kill shit so no need to be malicious / waste time & chemicals).


So yeah, now you know. I actually find wasps strangely fascinating. I had two pet dead wasps named Romulus (a Dominus) & Vortigern (an Aurelius). Hey, people have butterfly collections, and no one says thats weird. I was going to try to collect a specimen of all the rarer types of wasp, but I only came up with this plan late in the season and didn't get a chance. Also I found a dead queen bee from a kill and placed it prominently in our office with a sign identifying it as "Queen Amidala."