Anders paused to wipe the sweat off his brow. Holding the broom in his right hand he instinctively tried to look at the watch on his left wrist, but then realized he'd taken it off earlier so as not to get it dirty when he was tarring the rigging. He remembered hearing the ship's bell rung seven times though, three double rings and a single, meaning it was some time after three thirty. Almost quitting time! He resumed sweeping the deck.
"Hey Andush," Anders was startled by the bosun coming up behind him. "Remember to sweep across the grain of the wood, or else you'll pull out the oakum between the planks"
I knew that he thought to himself, but only said "aye aye!" and carried on.
As he moved about the deck he limped ever so slightly. The day before, they had used the capstan to raise the longboat. As one pushed around the capstan bars one had to step over the rope that led forward from the captsan at about knee height to a block on deck and thence up to a block aloft and then back down to the boat. This was difficult enough while raising the longboat, but while lowering, one the capstan had to turn in the other direction to unwind, and to do this the sailors on the capstan bars don't turn around, but walk backwards around the capstan making sure it doesn't turn too fast and drop the boat. While doing this one must be wary to step backwards over the line, and Anders had had a mishap.

Eight bells at last! Anders gratefully returned his broom to the closet and reported for the end of day muster around the capstan. Today was the day they were going to take the smallboats down the river to the island!

And hour later Anders found himself descending a ladder off the pier and veritably having to leap into the tossing small longboat which was being buffeted by the currents there. He was slightly worried his injured leg would betray him, but safely made it aboard and made it aboard and took his place at one of the rowing benches.
They cast off the bow and stern lines and the "out oars!" command was given. They pulled at the oars until they were in the middle of the wide Gota river and then hoisted the two sails. The crew stowed their sweeps and enjoyed the fine weather as they sailed down the river, leaving their huge mothership, the three-decked sailing ship Gothenburg, behind at the dock. To their right the old shipyard of Eriksburg sported rows of upscale apartment buildings, with people walking their dogs along the shore. To the left domes and spires of the old town rose above brick buildings which now housed restaurants. They passed under a tall bridge and then there was a modern container port to the right and parkland on the left.
Soon they saw another sailboat catching up. Some of the crew were on a small more modern sailboat named the Draken. Despite leaving significantly later than the longboat, they were easily traveling twice as fast on the same wind. They waved jauntily as they swept past. Anders shook his fist at them.

As they approached the island, however, the Draken was still beating about looking for a place where it could land as the longboat pulled up to the rocky shore -- with their deeper keel Draken couldn't come as close, and eventually were compelled to swim ashore. 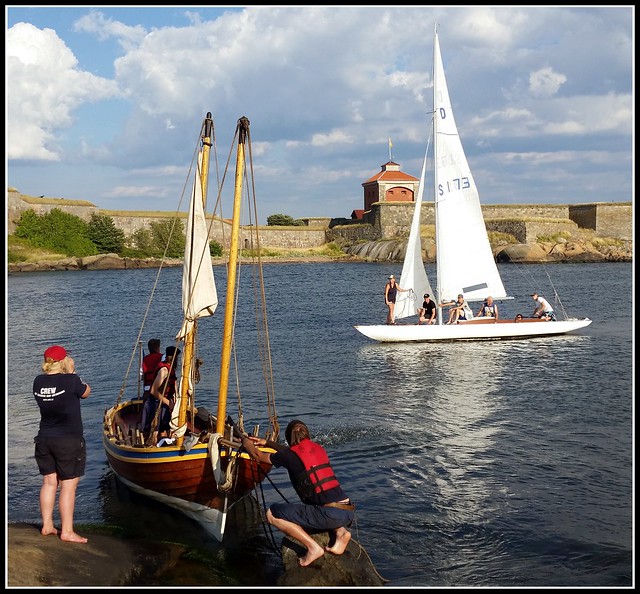 Anders set about exploring the small island. It was covered in knee high grass, with some thick groves of trees and high rocks in the middle. On one side he found the foundations of old buildings and some weathered gravestones with 18th century dates on them. From the high rocks in the middle he could see the forested far shore of the river on one side, and alarmingly nearby on the other, shipping containers piled like legos at the commercial port. In the distance in the seaward direction, among the islands huge windmills loomed like giants. Anders wondered idly if people would feel the same way about wind power if instead of being picturesque windmills were considered eye-sores. Looking back towards where they had landed, he saw his crewmembers had set up the grill and started working on dinner. He hurried down, anxious not to miss out.

Presently it was time to load back onto the boats and start the homeward leg, as even the long lasting northern latitude sunlight doesn't last forever. The longboat was loaded and launched with relative ease, and they watched the Draken crew struggling in the water to push their boat off -- where they had tied it up the keel had gotten stuck in the mud anyway. Expecting that the Draken would soon pass them and beat them home anyway, they pulled at their oars and set their sail, hoping to make the most of their head start. They soon caught the wind and stowed the sweeps (as oars are called on larger boats)

As they rounded the nearby island and made for the bridge, sure enough there was the Draken under sail coming around from the other side, already looking likely to beat them to the bridge in the fading light. They shook their fists and jokingly cursed the crew of the Draken. To add insult to injury, the wind died in their sails and the canvas hung limp. "Out sweeps!" came the command.
Across the water the Draken's sails also hung limp, and they had no sweeps. After the Draken had bobbed helplessly in the water for ten minutes, the radio in the longboat commander's hand squawked "Småbåt, småbåt, småbåt, this is Draken"
"Yes Draken, this is småbåt" answered Martin, the tall dutchman in the stern of the longboat.
"Uhh, could you come over here and tow us?" the crew of the longboat erupted in laughter. 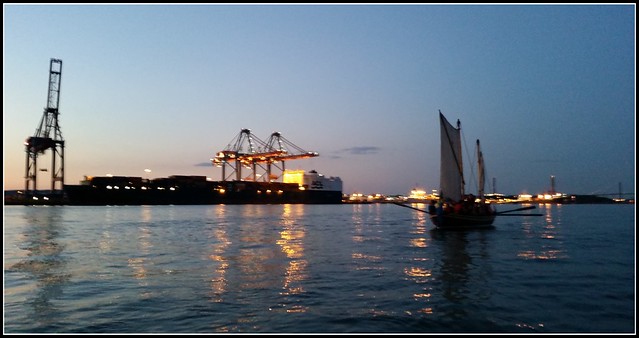 It took four hours pulling at the sweeps to complete the homeward leg, while the outbound leg had only been an easy half hour. They tried singing sea shanties such as the Mingulay Boat Song but eventually as the hours wore on they fell to silents save for the steady splish splash of the oars. Pulling at oars gives one a lot of time to think and as they pulled through the warm summer evening on this, one of the major rivers into the interior of Sweden, Anders thought of the countless viking longships which must have pulled themselves up this same stretch with the same splish splash.

Finally, long past midnight, under the moonlight, the exhausted crew finally pulled up beside the great bulk of the Gothenburg, and turned the Draken loose, to make their own way with their two small paddles to their place on the dock.

This has been an elaboration on the fateful island expedition mentioned in this entry, as told from the perspective of the fictional Anders (pronounced Andush in Swedish).