Christie felt the salty wind on her face and she was excited. She was on a pirate ship! And soon there would be a battle. The deck vibrated under her feet as the vessel motored out to one end of a large t-shaped inlet.
"Ladies and gentlemen, could I have your attention please?" a crewmember with bushy red muttonchops was standing on the bench in the middle of the deck addressing the assembled passengers.
"In a moment we'll shut off the engine and set sail, to do battle with those villianous rogues on the Lady Washington over there!" and he pointed at the similarly piratey looking ship at the other end of the inlet. There's not much wind today so we're probably going to have to set everything we've got..." he continued to explain something about lifejackets and introduce the crew, but Christie was too busy taking in all the exciting sights around her. Finally he finished, and the captain, a big fellow with a huge red beard that could have belonged to a dwarf in Lord of the Rings, hollered out a series of commands. As the crewmembers swarmed up the lattice-like grid of ropes that formed a ladder up the mast, the captain switched off the engine. She hadn't noticed how loud it had been until it was off, but suddenly the deck was no longer vibrating and there was just the sound of waves lapping at the side. The crisp salty wind she'd felt against her face abruptly stopped as well, and she realized she'd only felt wind because of the vessel's forward motion.
She craned her neck back to see the sailors high above. They swiftly ascended the mast on one side and then, where the yardarms formed a t, they crossed over to the other side to loose the sails. Finally, after much running about and hauling on an overwhelming number of lines, they had all the sails set. But there was still no wind, and the boat still wasn't moving.
Passengers looked at each other and grumbled, why aren't we moving? This is not how it looked in the pirate movies!
"Ladies and gentlemen!" the crewmember was addressing the passengers again, "We are now prepared to travel the way most of the world was explored, at the speed of smell!" There was a moment before there was some laughing as people got the joke.
"Now we've evidently got a little time ahead of us, so let me explain what we're going to aim to do. In the movies the ships just line up and fire away into their side, right? But the sides are the strongest part of the vessel and when you're doing that you're getting it right back from them, so what you want to do is what's called crossing the T, where you cross either in front of or behind the opposing vessel. That way you can fire your entire broadside and they can only fire the few guns they might have facing forward or aft. In addition, your shots will roll down their entire deck, having ample opportunity to hit and destroy things and thus make them sad. And if you're firing at the back of their vessel that is the very best because the stern is the weakest part and you might knock out their rudder or their captain."
Christie looked out at the other vessel, similarly bobbing motionless with all sails set. This could take awhile.
"Naval battles would often take hours or even days" the crewmember explained helpfully.

The gunner, a blonde red-faced fellow introduced as "Pony," explained how he fired the four guns (two per side), which he insisted were never to be called cannons. Then the captain called out for the crew to "set stunsels!" and crewmembers ran aloft again. They pushed poles out further on the ends of the yards, increasing the length of the crossbar of the t, and then set additional sails on them, outside the main big square sails.
Meanwhile someone pointed out that the other ship appeared to be rowing now -- they'd pushed two oars out on each side, which a crewmember referred to as sweeps, and were trying to row themselves, but given the size of the ship, the four oars weren't making much progress.
The captain stroked his beard and looked thoughtfully at the sails while the passengers and crew began to chat with each other. A good-looking crewmember had just started to talk to Christie, with a devilish twinkle in his eye, when the captain burst out "Kirby! You and Crazy Ivan and Knuckles lower the smallboat!" and the crewmember quickly excused himself and ran off to the rowboat hanging in davits off the stern. They rowed the little rowboat to the front of their ship and threw a line up, which was secured to a post and then they tried to tow the ship, though they didn't appear to be making much more progress than the other ship. 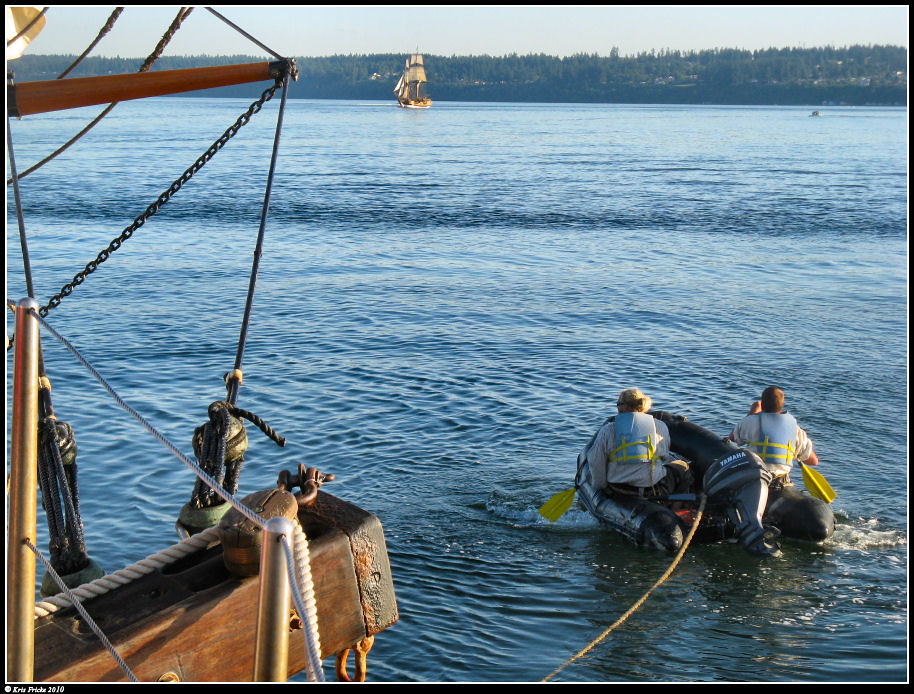 Presently, something splashed in the water off to the side, followed a minute later by a second splash. Curious onlookers peered at the other vessel, about a hundred yards away by now, and then they saw that on deck they had a giant slingshot. Two people held either side while a third pulled it back with the projectile. Examination of the floating projectiles revealed that it was leftover biscuits from breakfast that were being fired!
"Rig the attack bubbles!" called out the captain in as fierce a voice as one can say such a thing. A crewmember ran aloft with a bottle and bubble-blowing utensil. From a position up on the mast, perched on a yardarm, he blew large bubbles which floated slowly towards the other vessel.
"Pull us around to starboard!" the captain called down to the rowboat, and the sweating rowers started trying to pull the nose of the ship to the right.
"Ahahahaha we have you now!!" a crewmember called out to the hapless other vessel, which was still pointed towards them and less able to turn with their inadequate sweeps.
"Okay, everyone on deck, we need you all to help," the captain addressed everyone. "I need you all to run in a counter-clockwise circle around the deck." Everyone stared at him blankly. "As you run you'll be pushing the ship with your feet towards turning clockwise" he explained. "Now go!" Laughingly, everyone began to run in a circle.
"Okay, okay, avast the running and clear the gun deck!!" the captain called out. Christie had been so caught up in the fun of the ridiculous run around the deck that she was surprised to realize they very nearly were broadside to the other ship now. The other ship was also attempting to turn, so unfortunately, it wouldn't be a clean shot down its length, but they still couldn't get all their guns to bear.
"Kris, help Pony get all the guns on the port side," the captain ordered, and the crewmember with the muttonchops helped the gunner detach a gun carriage from where lines held it on one side and they pushed it slowly, both straining with its weight, to the other side. Then they did it with the second gun from that side until all four guns were on the side facing the other ship.
"Fire as she bears!!"
In rapid succession, the gunner used a stick with a smouldering piece of linen on the end to touch off the touch-hole of each gun, which caused each gun to go off with a deafening boom and cloud of sulfurous-smelling smoke. 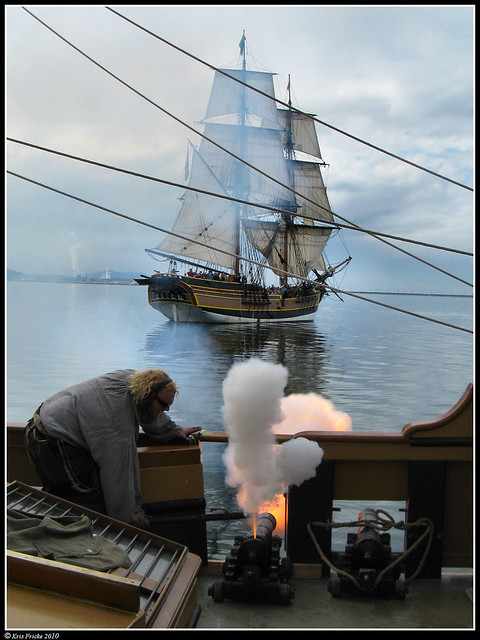 The other ship came around and fired its gun with a faraway bang. "That's a nice ketch!" one of their crewmembers yelled, making "ketch" sound like "catch," a crewmember near Christie made a disgusted face, and said "he makes that same joke every single day. Our ship is a ketch you see, but that's no excuse to use the same joke every single day."
"You have tiny baggywrinkles!!" he called back to the other ship. "Those fuzzy things on the line are called baggywrinkles," he turned and explained to Christie. "They prevent chafing. You can see theirs are quite small compared to our big, manly, baggywrinkles."

A few more shots were exchanged as well as many more obscure pun-based insults, and then it was time for the crew to scramble aloft and take the sails back down.

As they motored back across the bay, Christie reflected that even though there hadn't been any wind and they hadn't moved fast, it had been fun seeing the creative ways the sailors came up with to try to move their ship.
"Gunner, load one more gun!" the captain called to Pony, who was just crossing the deck with tea.
"What, why?" he started to ask, and the captain pointed to a large ferry coming down the bay. The Puget Sound ferries dwarf the tallships, and look like giant whalefish with open mouths as they have a large cavity going from front to back, which is the car deck.
"Maple Syrup is headed home on that ferry, and we should demonstrate a good example of crossing the T anyway." the captain said with a grin.
"Aye aye, captain!" Pony enthusiastically responded and started reloading powder into one of the guns (they'd been returned to their original sides). Under engine power the ship easily manoeuvered to cross well in front of the unsuspecting ferry.
"Fire as she bears!"
Pony waited until the ferry was perfectly aligned, daylight clearly visible out the other side of the gaping mouth. "FIRE IN THE HOLE!" he called out as he touched off the gun.
There was a boom, and swirling grey smoke, followed quickly by a hollow rumbling echo ... and then a half dozen car alarms went off. The crew and passengers cheered loudly.

Crossing the T bonus entry: in 2009 I wrote this hand-written entry on hand-writing which totally could have also served this topic.