December 1915 - They leaned against the wall of the trench, shoulder to shoulder, trying to stay out of the stream of muddy water flowing through the middle.
"Another day in paradise" muttered Johnnie, pulling his ten helmet down to shield his eyes from the rain.
Tom nodded vacantly, trying to enjoy the "calm" before the storm. Artillery shells whistled overhead, occasionally a particularly close explosion rained dirt down on the men in the trenches. Between the explosions of shells, there was a constant crackle of gunfire.
"God damn Turks" grumbled Hank.
"Alright boys, get ready to go over!" called out the sergeant. The men turned around and gripped the wooden planks that reinforced the sides of the trench, poised to climb over. Tom moved as if in a dream. He knew that death very likely waited for him over the edge of the trench, but still he moved like an automaton in preparation to throw himself over the lip and fight to the death against a people who were his enemy for some very obscure reason.
All across the line the sergeants blew their whistles and without thinking Tom scrambled up the muddy trench wall in unison with everyone else. The man immediately to his right, Vognsen, was hit as soon as they came over the lip, falling backwards with a muffled yelp.
Tom gripped his rifle and tried to duck low while running forward. The landscape in front of him was a hell of mud and craters and abandoned water-filled trenches. Up a slippery slope of a few hundred feet of this were the trenches occupied by the Turks. Tom only had time for a quick glance in that direction, before he had to return his gaze to the treacherous terrain right in front of him. In those few seconds he glimpsed the flash of dozens of gun muzzles firing. Then he was splashing through the mud, scanning for placed to land his next step where he wouldn't slip and fall in the open, trying not to trip on barbed wire or one of the many bodies already here. Bullets zipped past and he was vaguely aware of more people being hit and falling, and then he was diving into a crater that would shelter him from the enemy fire.
Hank and Johnnie splashed down beside him immediately after. They were now thoroughly covered in mud but that was the least of their worries. After catching their breath for a moment they nodded to eachother, it was time to keep going. The attack could only succeed if everyone kept going and maintained the momentum. To give in to fear would only leave one stranded in the middle of the battlefield, and worse, accused of cowardice. All together they heaved themselves out of the crater and back into hell. This time Tom saw people running ahead of him, and falling down dead. Men hiding behind obstructions, some with a look of determination on their faces, some with a look of terror.
Johnnie suddenly jerked and fell to the ground holding his side. Hank hesitated for a second as if to help him but after several shots whizzed by very close he thought better of it and kept running. An explosion near Hank sent up a fountain of dirt and propelled him into a muddy ditch, where he lay dazed for a moment. He looked around no man's land and saw fellow anzacs falling left and right. He gripped his rifle and started to get up but a bullet ricocheted off the top of his helmet just as it started to clear the trench, sending him back down again.
"Retreeeat!" he heard someone calling. He looked around to see what everyone else was doing, scarcely daring to hope it was an actual order and not a lone man who'd lost his nerve. "Retreat!" he heard again from a different voice, and saw soldiers running back the way they'd come. But they were still getting shot at, still dying. It wasn't over yet. But he realized he needed to run now while everyone else was, and not be a lone target later, so he jumped up and started running.
He splashed back the way he'd come, jumping over snarls of barbed wire and muddy collapsed trenches. Before he knew it he was hurling himself headlong into the jump-off trench, slamming into the back wall painfully, but he was safe. He lay in the foot-deep muddy water at the bottom of the trench catching his breathing and thanking god he was still alive. He was still gripping his rifle, though he realized he hadn't fired a shot. He looked up and saw Hank next to him in the trench. 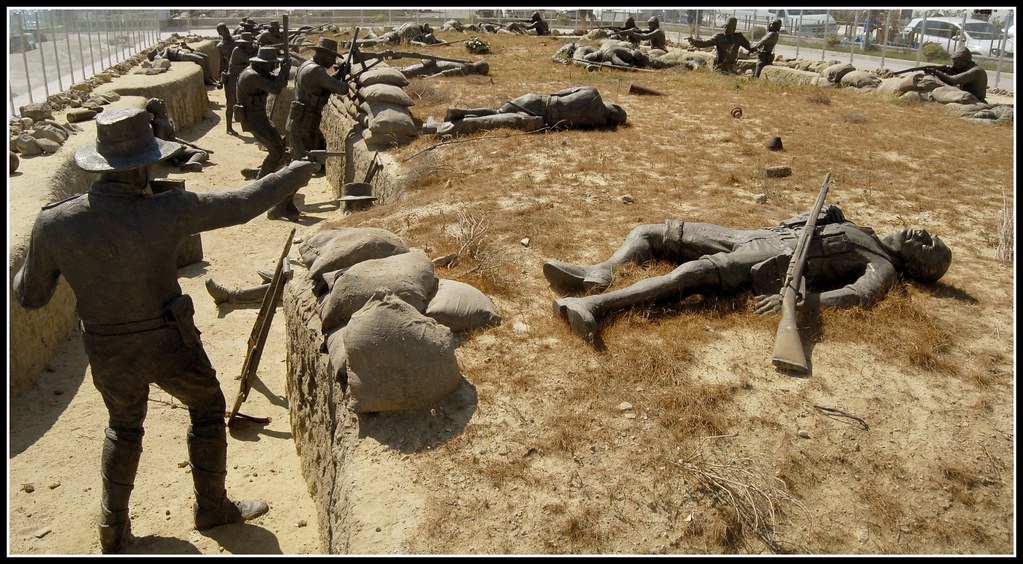 "Heeelp! Please heelp me!" the pained piteous cry had been coming from No Man's Land for hours. There had been plenty of moaning and screaming in the months this battle had dragged on, but this was different, at least for Tom and Hank, because this was clearly Johnnie's voice, their squadmate. Peering over the edge of the trench they could see him lying midway between the trenches, covered in blood.
"Where are the stretcher bearers??" Hank demanded angrily for the dozenth time. During lulls in the fighting the medics from both sides would go out and collect the wounded, but this sector had been too "hot" all day. And so they had to listen to their friend slowly dying, just a hundred feet away.
"Goddamn Turks," Hank would say, "heathen bastards!" and jump up to the edge of the trench to try to take shots at the men in the opposing trenches. Shots came rattling back pushing Hank back down the trench, and still Johnnie could be heard moaning in anguish.
Tom was looking down his rifle sight at the enemy trench when he saw a figure heave himself out of the trench. Instantly he had him in his sight and his finger tightened on the trigger but he didn't pull it, there was something strange there. Up and down the line the crackle of gunfire continued but this man was the only one to come out of the trench, so it wasn't an attack, and he wasn't running or trying to hide. He held his hands up so it could be seen that he didn't have a weapon, and he very purposefully started walking down the slope.
"Hey, Hank! Look at this!" Tom kicked Hank gently in the the rib, as he was down in the trench at the time. Peering over the side and seeing the man Hank instinctively pulled his rifle up to take aim but Tom pushed it down, "no look, what's he doing?"
The soldier, muddy as they themselves, but with a sort of turban wrapped on his head instead of a tin helmet, was coming down the slope to where Johnnie lay. They could make out a dark mustache on the big man's weathered face. The battle continued around him, a shell exploded nearby and showered him with dirt but he blithely kept walking until he reached Johnnie. He bent down and carefully picked up the injured anzac, and trudged through the muddy mires directly toward Hank and Tom.
As he approached the line Hank and Tom clambered up to take Johnnie from him, and without saying a word the big muddy mustached man turned around and started back for his own trench.

Based on a true story.