Okay I let this get a week behind a month behind so I'm unfortunately a bit fuzzy on the details of what happened day by day, but that may be good, perhaps it'll free me from the obsessive compulsive need to write down every little thing in the exact order it happened in.

So where we had left off I had just returned to Arusha, Tanzania, after the bus trip south to Dodoma we had returned the night before and Doug and I and this Israeli fellow Dr Shimon Barel had ended up at the Lush Garden Hotel.

Monday, November 17th - This fellow Simon (not to be confused with Shimon), whom we had met at the conference, had invited us to come visit him in nearby Moshi after the conference. One of his staffmembers was making that same trip that morning already so we arranged to have that young man guide us through the busses.
While Doug and I were waiting for him that morning, Shimon revealed that he didn't actually have a flight back to Israel until Wednesday and didn't have any plans for the next three days, so Doug and I talked him into joining us.

It was a nice summery day in November as we took a taxi to the extremely crowded bus station. The night before when I'd asked Simon when the bus leaves he had said "oh it doesn't really have a schedule, it just leaves when it's full" (I've gone on airplanes in Nigeria that operate on that same principal). As it happens the bus was just pulling away as we got to the station. We had to veritably burrow through the throngs there and climb into the open door of the moving bus. Fortunately it had to do something like an 18 point turn to get out of the station.

Took about an hour on the highway to get to Moshi. Landscape was relatively lush, lots of trees. Mount Kiliminjaro would have been looming up over Moshi if it hadn't been shrowded in clouds that morning. The town is located due south of the mountain right at the base. While the downtown was fairly typical of an African town (lots of pedestrians, streetside stalls, occasional smelly holes in the sidewalk which lead into sewers and would be very unpleasant to fall into.) Just outside of the downtown area though it was like nothing I've seen in Africa before. It was positively suburban. Broad quiet tree lined streets, with blue-flower-filled jacaranda branches overhanging the streets. Houses set way back, typically in compounds surrounded by walls, but because of the beautiful trees overhead and the bougainvillea growing on many of the walls they don't look intimidating, just sleepy and peaceful. The biggest house in town appears to belong to an Anglican arch-bishop. Interestingly the better part of town is called "Shantytown." 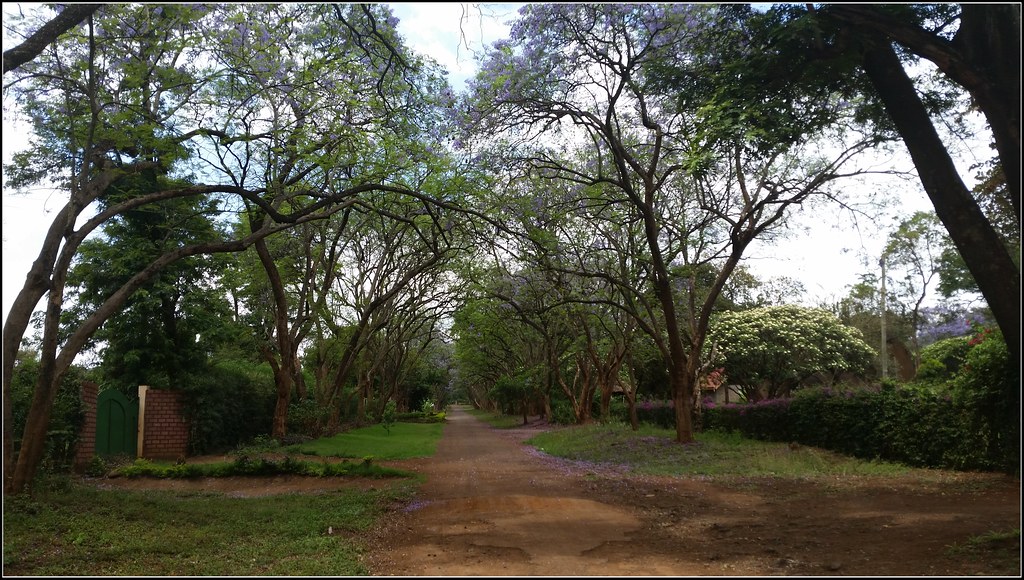 Our first stop was the compound that is Simon's business headquarters. Inside the walls there was a fleet of half a dozen or so olive-green safari land-cruisers (he runs www.nomadicexperience.com), as well as a vegetable garden, a chicken coop, a lot of open space, some storage sheds, and his business headquarters building which used two shipping containers as the base of the first floor. Three or four modern beehives were scattered about the yard, with bees going in and out. The safari company appeared to have about five full time employees who were there at the time -- it's the off season so some were on vacation. One of them was a French intern who would be working for the company when she returns to Europe two days hence.

Next we headed up the mountain to see another of Simon's properties, bouncing up the paved streets and occasionally taking shortcuts along dirt roads. We stopped by a nursery on our way to pick up some trees. When we arrived there we found ourselves high up on the slopes, right at the edge where everything above us was national park. Simon had a number of acres up here he had recently planted, and on one lot he was going to build a house.
Shimon could generally be found with his big rectangular ipad held up taking pictures or videos of everything around him. He must have collected hours of video during the trip. I think he mentioned being in his fifties but he exuded such youthful enthusiasm for everything around him he hardly seemed "old." A "herbologist" by training, he was particularly prone to spot some interesting plant off in the corner and bound excitedly over to it exclaiming "I never thought to find this here!"
Doug, for his part, is a retired beekeeper with an insatiable appetite for adventure and a inveterate penchant for joking. Sometimes its hard to tell when he's telling the truth because of his love of spinning tall tails, though he'll usually tell you after a few minutes if he's been pulling your leg. One of his favorite games to play with people he just met is to show them a picture of his daughter and of his wife and have them guess which is which -- his wife is actually younger than his daughter, and they're both African/African-American (his wife, 25, is Ethiopian. His ex-wife was Jamaican).
Simon is tall and skinny and super energetic. He does endurance runs all over the world, and holds the guinness book of world records record for fastest ascent-descent of Kiliminjaro. It's recommended to do it in nine days. Some people push it and do it in five days. He did it in nine hours. His overabundance of energy clearly spills into every day life, where he seems to have a dozen projects going on at any one time and flits between them like a humming bird. I'd imagine it would be exhausting to try to keep up with him for just one entire day.
"You should be the president of Tanzania!" Doug told him at one point, to which he responded
"Why? I put manure on my potatoes and they grow. That is good. They grow! Why would I want to be president??"
As we continued our tour of Simon's lands we came across an area, maybe half an acre, that had been painstakingly hand-weeded, and he told us a story. Awhile ago he had bought a prize ram from far away which he intended to use for breeding. But no sooner had he gotten the ram than it disappeared, and he was able to easily discover that a local man and killed and ate his ram. Others encouraged him to have this man thrown in jail for his theft, but Simon reasons "he just did it because he was hungry and he needed to feed his family. So instead I gave him a job." Now the man that ate Simon's ram is paid to weed his land. And from the looks of it he does a very thorough job. 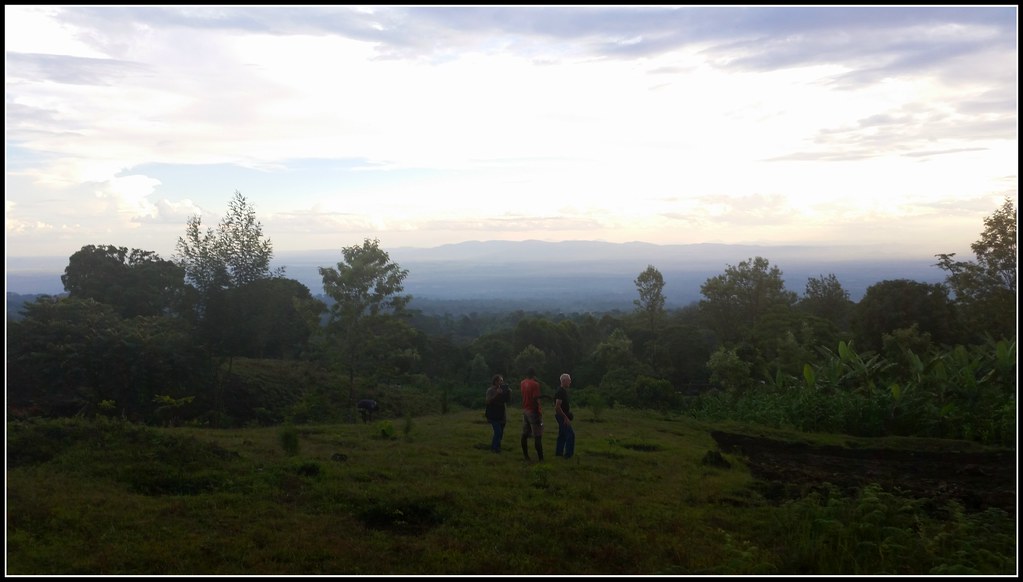 With his various business ventures to run, Simon was also frequently looking at emails on his blackberry. While we were on it he received some troubling news and related another story to us -- a nearby safari camp had just been burned down by the Maasai. The Maasai tribespeople are herdsmen you see. Even if one starts an electronics store and becomes rich that way, he still must own a herd of cows or he will be regarded of having no wealth. This nearby safari camp, purportedly a quite nice five star sort of place, had for years let the Maasai graze their cattle on land that legally belonged to the camp, but they recently decided to fence it off. The local Maasai were not terribly pleased with this and a confrontation ensued. During this small initial confrontation one Maasai man got injured, possibly by something that had nothing to do with the opposing side, such as throwing a rock and having it bounce back off something and hit him. But he was on the ground and cradling his leg when someone took a picture of him and sent it to other Maasai who weren't present, saying that he had been shot by the property owners. This image went viral and Maasai forwarded it to other Maasai and the whose surrounding population rose up en masse and descended on the camp, burning it to the ground.

That evening Doug and I had ate at a Thai restaurant that was just a short (and pleasant!) walk from our guest-house. I didn't expect much from a Thai restaurant in a small town in the middle of Africa, but it was absolutely delicious. We had about another week in Moshi (weren't really sure yet), but it looked very promising!