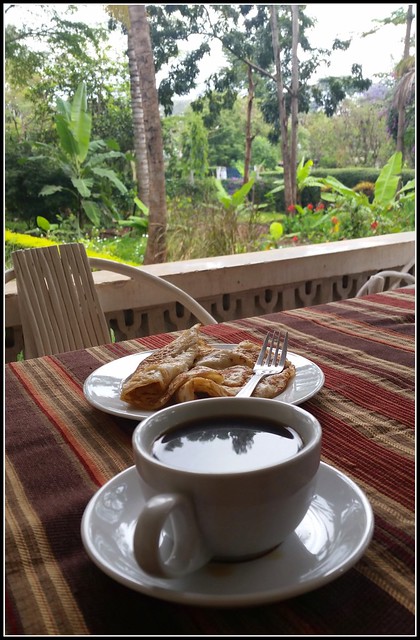 Tuesday, November 18th - Woke up in our lovely guesthouse and had freshly made coffee and pancakes on the porch, all prepared by the dear diminuitive Neema. Enjoyed a nice leisurely morning in this idyllic little guesthouse, sipping coffee by the garden and talking with the older French couple who were also staying there. They were apparently visiting a grand-daughter who was working for an NGO in town. The woman a retired psychologist, now writing a book, and the man a retired engineer, they provided engaging intellectual discussion and Shimon in particular would prove prone to engage in long deep conversations with them.

Simon came to pick us up late enough in the morning that we were to make our first stop lunch in town. He led us to a little place that was sort of hidden away down an alley, but once we ducked into the unassuming entrance we found ourselves in a very pleasant open air courtyard shaded by trees with comfortable seats and well attended with locals. The food, all local fare, typically cost around a dollar per main dish, and Simon ordered things for all of us. First there was a hearty sort of bean soup, and then a dish of beans and corn that was quite good. It was accompanied, like every meal we'd had in Tanzania, with a helping of spinach. Popeye would like this place.

From there the five of us (Simon, Shimon, Doug and I, and a cyclist friend of Simon's from Hawaii who happened to be on the tail end of a several-weeks visit) drove about an hour along the base of the mountain until we got to a place where a guy was making concrete hives. Or cement? I'm told there's a difference but they're the same to me. Anyway we pulled into a tree lined drive with just a few buildings nearby, and I remarked that from the looks of things you could think you were in England or Germany or America or anywhere else in the world -- the buildings looked well-built and modern, the tree-lined drive was nice and well maintained. Under an awning around the corner we found a small gaggle of men gathered around, with several hand-made molds strewn about. Hubcaps formed the two ends of the cylinder, and chicken-wire and plastic formed the sides before the cement was slathered in. The man who had invented these and was supervising it was a retired German professor who was the very spitting image of the Doc from Back to the Future. Same wild white hair, same mannerisms and exciteable exuberance for his numerous innovative ideas.

In addition to the simple face of making cement beehives from molds, he had the additional innovation that the hives would be opened from the bottom rather than the more-normal top. He reasoned that bees prefer to climb upwards when smoked so if you open the bottom and smoke them, the bees will all climb out of your way and you can then inspect the comb from the bottom. He'd also taken to hanging shiney dangly things in front of the hives which would blow in the wind and get bees accustomed to movement and he claimed that hives he had put these near became so easy to work with he didn't even need smoke.
All this seemed very innovative and he had such enthusiasm I'd be reluctant to rain on his parade, but we collectively had many concerns with his ideas and because promoting good beekeeping practices is what I do I feel I should share what we feel is wrong with these ideas. Firstly we were all concerned about the weight of cement hives and Simon's cyclist friend is a construction contractor and told us from his experience, cement that thin would very very easily break. As for the bottom-opening of the hive, that's great but in order to remove comb you need to cut it off from hte thing it's stuck to, which is always above it. Thus to harvest honey from a bottom-opening hive you need to somehow reach way into it to cut from the top, or "honey badger" it out piecemeal which would make a royal mess. And finally, that dangley thing -- bees see things blowing in the wind all the time. I really can't imagine hanging a glorified wind-chime in front of them would make a lick of difference. But like I said, I solidly admire his spirit. 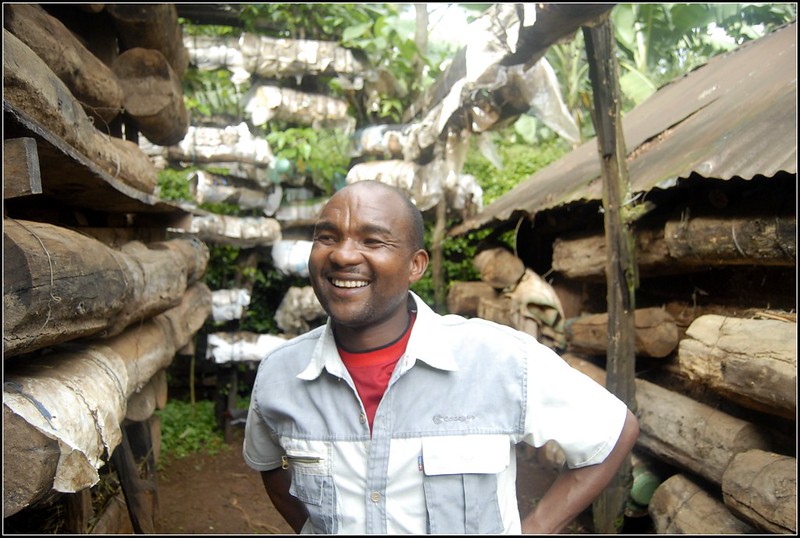 Next we traveled up the mountain to a house high up in the lush misty forest just below the national park line. Here a friend of Simon's (pictured above) had 450 stingless beehives. FOUR HUNDRED AND FIFTY, all lined up on his wall (also, pictured above). Being as stingless bees don't sting, this doesn't create the kind of insane menace having 450 normal beehives in very very close proximity to a house would. I'm not sure what the population of a stingless bee is (there's hundreds of different species, and I don't know which this was either, but I believe it was in the genus Melipona, for those following along at home), but they're much smaller than honeybees and the collective biomass of bees per hive is certainly less. They look like little flies zipping about, and even with 450 of them there it didn't LOOK like there was a lot of flight traffic. The other interesting thing is that stingless bees typically only forage over a 300 meter radius or so (as opposed to honeybees which have a 5,000 meter radius), so it was kind of amazing that the environment could support so many so close together.
The stingless bees, in addition to not stinging, also never "abscond" or leave the hive (African sub-species of honeybee are notorious for saying "fuck it, we're out of here!" if you annoy them, which can be easy to do), and their honey is worth several times more (because it tastes unpleasantly tart and "medicinal," and is therefore commonly believed to BE medicinal). But they only make a few hundred grams each per year (as opposed to honeybees which, in a traditional hive make about 15-20 kilograms per year). To harvest, they crack it open, and pierce all the honeypots with a toothpick (did I mention, like with bumblebee nests, the honey is stored in honeypots?), and then tilt the hive to let all the honey run down and out a hole in one end. It is poured through a strainer and into a glass or bowl. The honey is much more liquid than honeybee honey, and can be drank from the cup like a liquid.

Our purpose there, aside from seeing this fascinating operation, was that Simon had a deal with him wherein Simon would make hive boxes, and trade boxes for bees -- he'd give the guy a nice new empty box specially made for his stingless bees, and the guy would give Simon back a hive box full of stingless bees.

From there we returned back down the mountain to Moshi. A few hours later Simon retrieved us from the guest-house again and we all went to dinner at this really nice Indian restaurant that had just opened in town. In addition to the five of us from earlier in the day we also had Doug's wife in attendance (originally from the United States, currently a professor at a nearby university), as well as the French intern (who was leaving the next day or so). The tables were once again out in the open air, lit by candles and dim lights that might as well have been candles, and with a reflecting pool behind us. Felt once more like far from suffering the hardships of Africa we were living it up better than comparable options in the States.

Returned to our guesthouse for more intellectual conversations on the veranda. The night watchman, a young man of scarcely twenty, would sit on the edge of the porch wrapped in a his maasai robe. He didn't speak a word of English but he'd exhange enthusiastic "mambo"s with us ("jambo" is swahili for "hello," but after a few days in country someone let us in on the secret that "only tourists say jambo" and the locals usually say "mambo." The correct response to which is "poa," which is an equivalent transaction to saying "how's it going" "good!" apparently), and when the Germans showed up they'd share a companiable cigarette with this fellow we couldn't otherwise speak with. After the last of us went in to go to bed, he would cacoon himself up in his cloak on one of the lounge chairs on the porch.