We've taken another little vacation from the narrative story line so let me recap. The recent picture posts have been from a roadtrip across Tanzania and back. On return from there I went to Moshi on the slopes of Kiliminjaro for a week, where the last narrative entries took place. 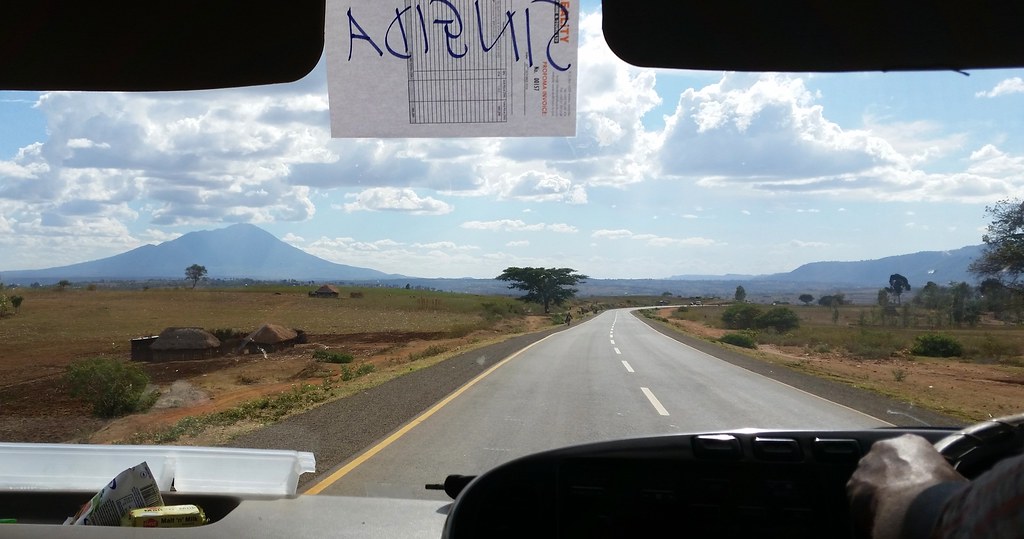 Monday, Nobember 24th - we had sorted out our bus tickets the other day in a dim office downtown where there seemed be absolutely nothing going on except our inquiry for tickets. Two buses leave every day for Nairobi, one at 6am, and one "around 2pm, but it doesn't even always run." Presumably because that's the bus that just arrived from Nairobi making the return run, except it doesn't always make it (!?). We therefore opted for the 6am bus. They kindly offered to have the bus actually swing by our guesthouse at 5:50 to pick us up, which we found awfully convenient.
It's also worth noting that on the 22nd, just two days prior to our trip, Somali terrorist group Al-shebab, known to be active in Kenya, hijacked a bus bound for Nairobi and executed all 28 non Muslim passengers. My mother was very worried about me.

Bright and early the next morning I was just about to enjoy a cup of coffee on the porch when the bus actually arrived a few minutes early of all things (this is not the African way!). Doug and I hopped on with our stuff. It wasn't a big charter bus but it was comfortable. The first leg was of course just down to the bus stop downtown. I'm not sure if this was an official bus station so much as it just parked on the street outside the office we'd bought the tickets on. It was a nice bright morning, and Kiliminjaro, usually shrouded in clouds, glowed orange in the morning light down one end of the street while the large red sun rose in the other direction, the sort of beautiful reverse-sunset people rarely catch.
Presently, some ten to twenty minutes after our scheduled departure (ie, much more comfortably in accordance with African custom), we had our full load of passengers and we were off. We had many good views of the mountain out the window to the right as we wound out of town though it appears I didn't bother to upload any of them.
At first the landscape outside of Moshi was mostly open with cultivated fields divided by rows of trees and numerous schoolchildren walking to school along the road in their ill-fitting uniforms with their books on their heads. As we approached Arusha about an hour later the landscape became much more lush just before we entered the city, as if we were driving though a forest or jungle just before the city. In the city we didn't go to the crowded bus station I'd been to before, which I admittedly had been a little bit dreading for its chaos, but instead pulled into the gated confines of the Impala Hotel. This was Impala Bus Lines and it occured to me that this bus line may have simply sprung up or existed to serve its hotels, though no one on it seemed to be staying there and most of our passengers looked to be locals, at least in the sense that they were clearly from East Africa. We changed buses here into a similar bus, though this one had assigned seating. I was dreading getting sardined by the assigned seating but as it happens no one was assigned next to me. There was other small buses from the same company there, it appeared to be a sort of hub.
Onward we went! Once again through the lush outskirts of town to a more sparce and arid landscape outside. As I'd seen on the earlier roadtrip, it wasn't uncommon to see people in Maasai robes walking along the road seemingly miles and miles from anywhere, as well as people (often also in maasai robes) riding bicycles, sometimes even casually going cross country across the flat hard-packed earth.

09:30 - we passed another very similar looking bus broken down on the side of the road. Two busses were parked there actually and we pulled off just in front of them and parked. Our driver jumped out and ran back to confer with the drivers. He came trotting back and then several passengers from the other buses came along carrying their luggage and boarded us. Is this where al-shebab reveals themselves and kills us?? The driver never announced anything to us but I believe the first bus broke down, and the second bus didn't have capacity to take everyone so they were waiting for another bus so as not to abandon anyone. I don't believe the other buses were even from the same bus company as us. So that was a nice little example of professional courtesy. Especially since no one murdered any of us.

Arriving at the Tanzania / Kenya border we stopped on a broad roadway on the Tanzanian side, the driver told us we had to go out and walk through, to take our carry-ons with us and not talk to anyone on the street or do business with them, and he'd meet us on the other side.

Our first stop was to stand in line at an office on the Tanzanian side and get our passports exit-stamped. Then we walked across the border to an office on the Kenyan side. I was struck by how porous the border was -- there was no fence, no narrow controlled entrance to make sure you actually got your stamps. The hawkers who were pestering us like flies followed us from one side to the other without any concern whatsoever for the border. On the Kenyan side we stood in line at another office to get our entrance stamps, as well as filled out the now customary form in which we swear we haven't been anywhere with ebola for the last 21 days. The Canadian aid worker who had been sitting across from me was delayed because she's been working as a nurse in the Congo, where they do have ebola, and she does come in to contact with dead people and blood samples. Somehow she was able to satisfy them that she wasn't carrying ebola after about ten minutes though. In the mean time those of us who were through were able to wait on the bus. I made the mistake of opening the window a few inches to get some fresh air and immediately several arms were thrust in holding beaded necklaces they urged me to buy. It was like being attacked by a very insistent enterpreneurial giant squid. As soon as I found a moment when the arms were occupied elsewhere I hastily closed the window.
Anyway, on we went! Presently Doug and I got to talked to the girl across the aisle from me (Doug was a row or two behind us). She turned out to be a Canadian nurse, I forget her name, we'll call her Heather. A few things made me suspicious, first it was several nautical turns of phrase, then I noticed her shirt had anchors on it, then I noticed the anchor tattoo on her wrist. "Do you.. sail?" I finally ventured. It turns out she indeed was in the habit of sailing on the barque Alvei. We of course had to then exchange some sea stories (for the many readers who are new to my journal right now, sailing is my other hobby when I'm not busy with bees ;) )
Heather also had interesting stories from her work. She currently works for Doctors Without Borders (MSF, Medecins Sans Frontiers) at a place called Masisi in the Congo. Googling the name brings up things like "Masisi massacre," "situation untenable," and "civilians under attack in Masisi." In Masisi the MSF staff live in a compound filled with buildings made of shipping containers, and I imagine large hospital tents. It is surrounded by a high fence, barbed wire, and armed guards, and you don't go out at night. Nearby there's a river where a large number of people mine for gold in a very rudimentary fashion. Children work there mining for gold as well, in conditions you would probably find deplorable. I'm not sure if they're compelled to this by sheer poverty and hunger or guns at their back from the Mai Mai rebels. She said just a few months back rebels raided the town for some reason and killed many people, and that they're expecting another attack in a month. Heather had just been on her two-weeks vacation, though half the time was taken getting in and out -- to get back to the camp she'd have to get to Nairobi, take a commercial flight (overnight this night) to Burundi, a bush plane to some town nearer the compound, and then an MSF vehicle would pick her up, altogether it would take three days.

Just twenty or thirty minutes past the border we pulled off to a little rest stop with a bathroom, cafe, and souvenir shop that sold knick-knacks that were all way out of our price range (most things were over $100), but the proprietor warily let us admire his wares, finely carved ebony sculptures of animals and people, book ends, back scratchers, all kinds of things a rich tourist might want to decorate their mansion with as a conversation piece to memorialize their safari. Not for poor aid workers like us.
Outside he had several maasai robes on a rack for sale, and I commented to Heather that I'd actually been meaning to get one, too bad these were probably grossly overpriced and anyway I didn't have any money on me. She said the $15 they were being sold at actually reasonably compared with prices elsewhere she'd seen, and she'd lend me the $20 she'd been saving for a visa to get back into the Congo. Awfully kind of her.
Doug, always making friends, determined that she was going to be idle in Nairobi for eight hours before her flight. Rather than spending eight hours of mind numbing and uncomfortable boredom at the airport, Doug invited her to come chill at out hotel with us, which she readily agreed to.

The other event of note on the road was when we passed a crashed liquid petroleum gas tanker on the side of the road. I didn't get a good picture of it as we wemt by, so instead here's a picture of the OTHER crashed petroleum tanker we saw on the earlier roadtrip: 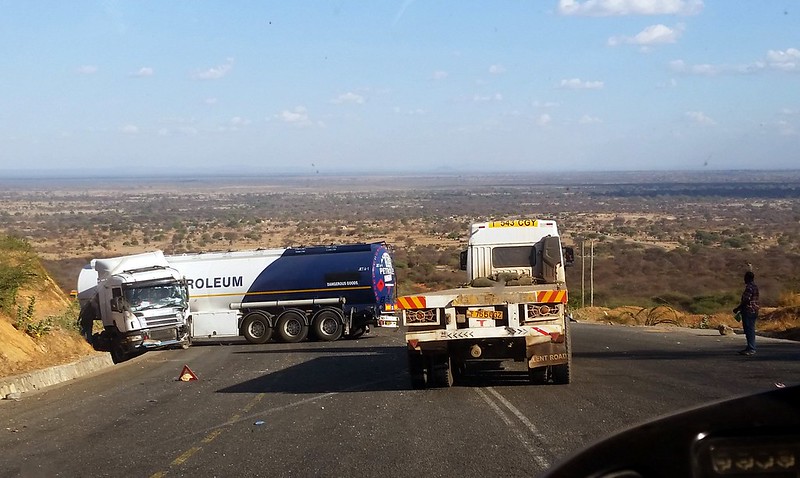 Around 2pm we rolled in to the metropolis of Nairobi. The bus stopped at a few major hotels, though our little hotel (the Kahama), didn't make the cut -- but we called ahead and had the Kahama's driver pick us up from the nearest hotel they did serve. Stopped by an ATM on the way to pick up some Kenyan shillings and then the Kahama was kind enough to change my shillings to USD so I could pay back Heather.

Now some of my friends have made some scandalous and salacious hints that having found a fellow tallship sailor and taken her back to my hotel I would have gotten up to some sort of mischief with her, I'll have you know that that's absolutely not true, I went out to dinner with the lovely Wairimu, a graduate student specializing in supply chains.

All the pictures above are from the earlier roadtrip across Tanzania. That's why I wanted to finish those pictures before I tackled this entry, needed some roadtrip pictures. ;)
The below is actually from the window of the dining room of the Kahama Hotel though.

Next, onward to Ethiopia!